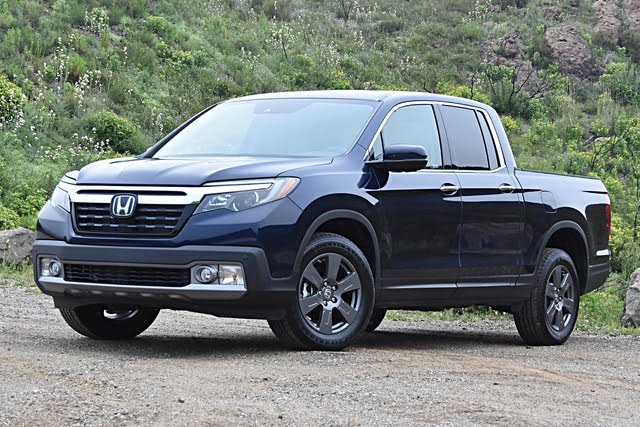 Sometimes, you need a truck. The rest of the time, you don’t. The 2020 Honda Ridgeline solves the former without compromising the latter. 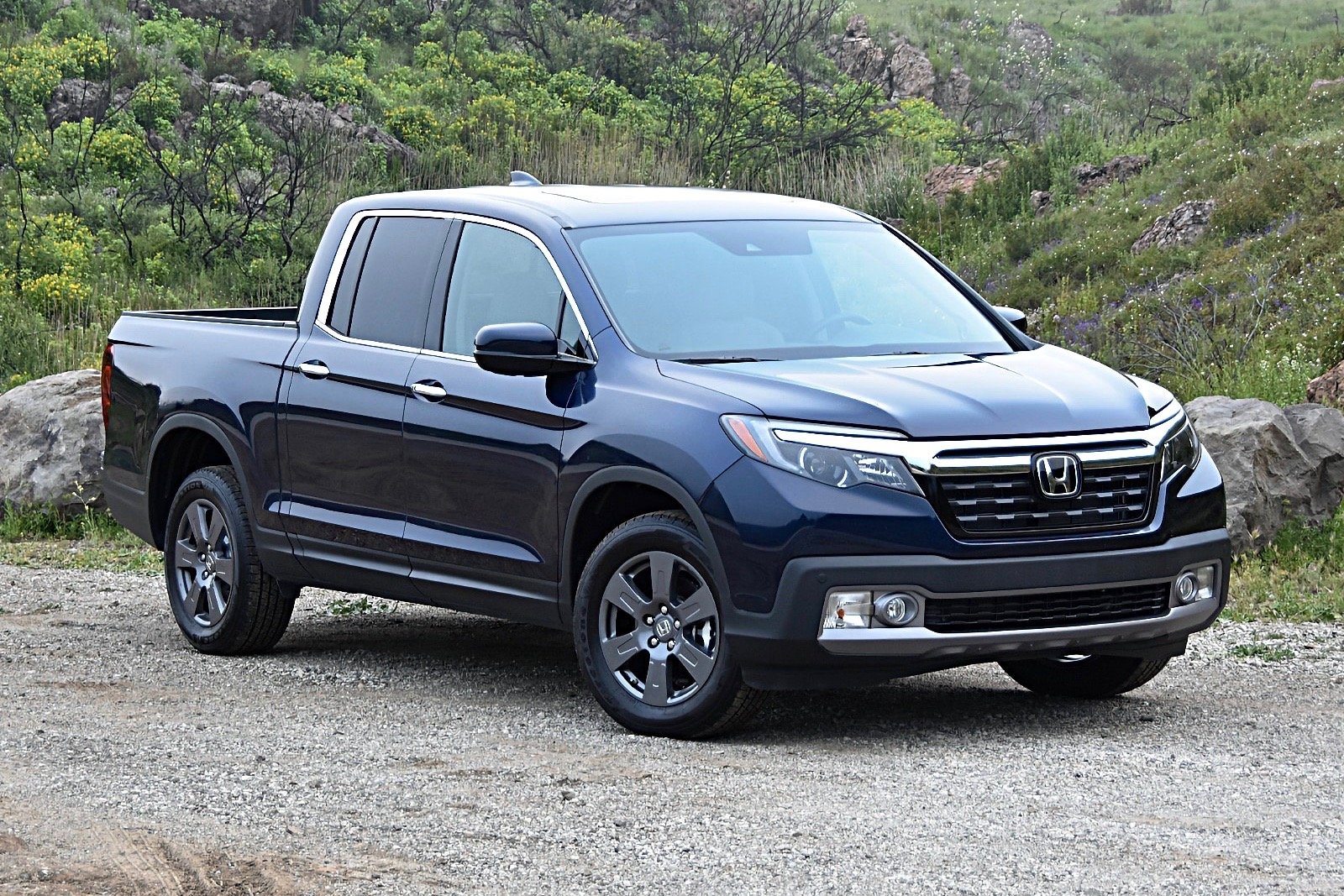 Based on a platform and engineering also used for a minivan and crossover SUVs, the 2020 Honda Ridgeline isn’t your typical pickup truck. True, it does trade maximum towing capacity, payload ratings, and off-road capability for greater comfort and superior driving dynamics, but most of the time, that’s preferable. And because Honda bakes in numerous thoughtful details that make daily driving more pleasing, you might just decide that the Ridgeline offers the right recipe for your needs. 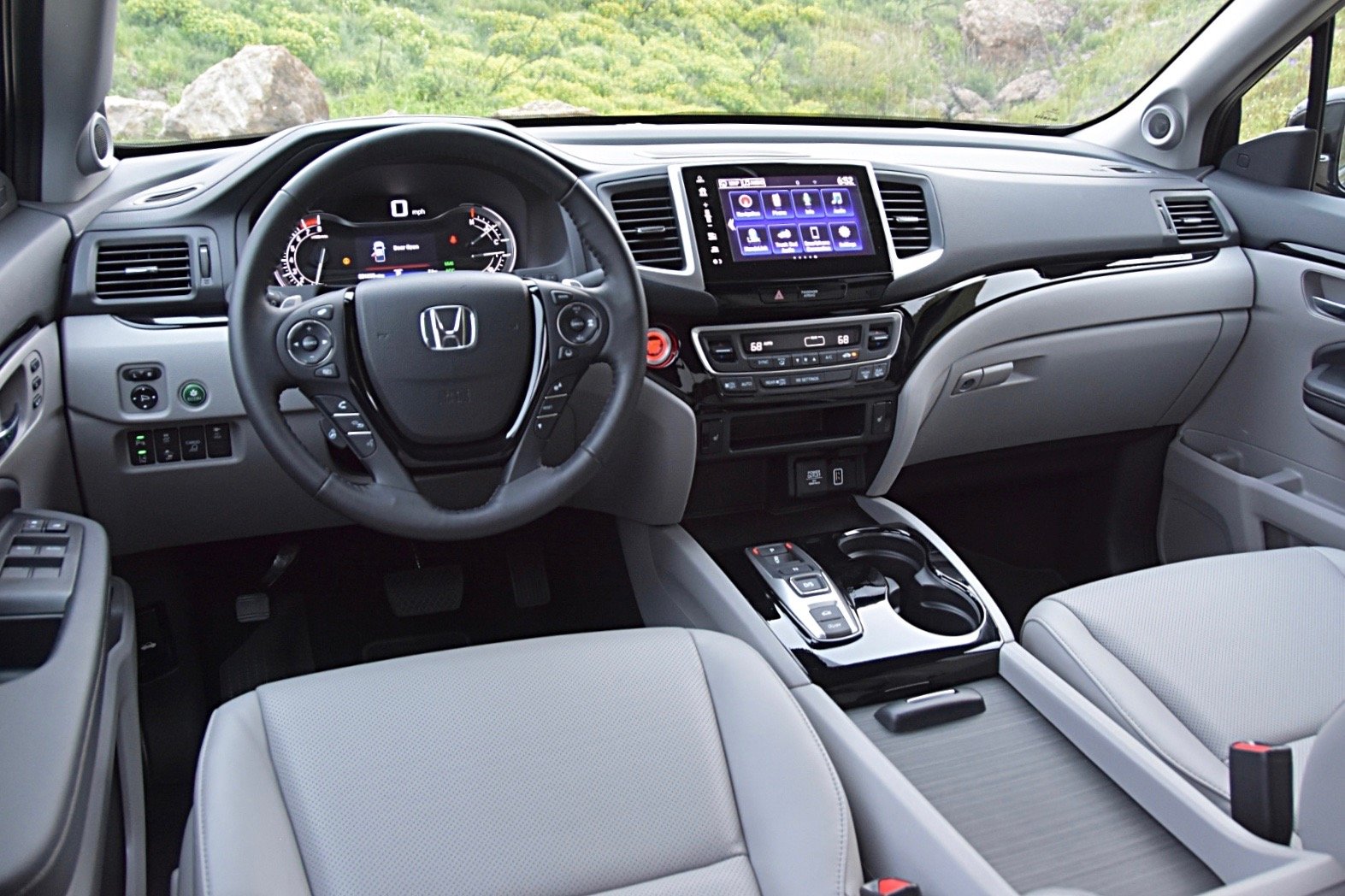 When the 2020 Honda Ridgeline arrived for evaluation, my 12-year-old daughter pointed out that it looks like a minivan in the front and a pickup truck in the back. If a kid that barely pays attention to the regular parade of test vehicles coming and going from the driveway is inspired to comment on that, Honda has a design and image problem.

Trucks are supposed to look rugged and tough, not like kid haulers. The original Ridgeline fit the description, but it was weird-looking. With the second-generation truck, the pendulum swung too far in the other direction. Perhaps the next redesign will get the styling right.

Honda also simplifies the lineup, offering Sport, RTL, RTL-E, and Black Edition trim levels for the 2020 Ridgeline. The base price rises considerably due to all of the added standard equipment, to $33,900. The test truck had RTL-E trim and no options, coming in at $43,140 MSRP (including a mandatory destination charge of $1,120).

Equipped with perforated leather upholstery, gloss-black trim, metallic accents, and plenty of soft-touch surfaces, the Ridgeline’s interior exudes quality, especially when compared to other midsize trucks, which frequently have hard plastic and unrefined details. At the same time, though, the dashboard is virtually identical to the Honda Pilot, a suburban school shuttle if ever one existed. 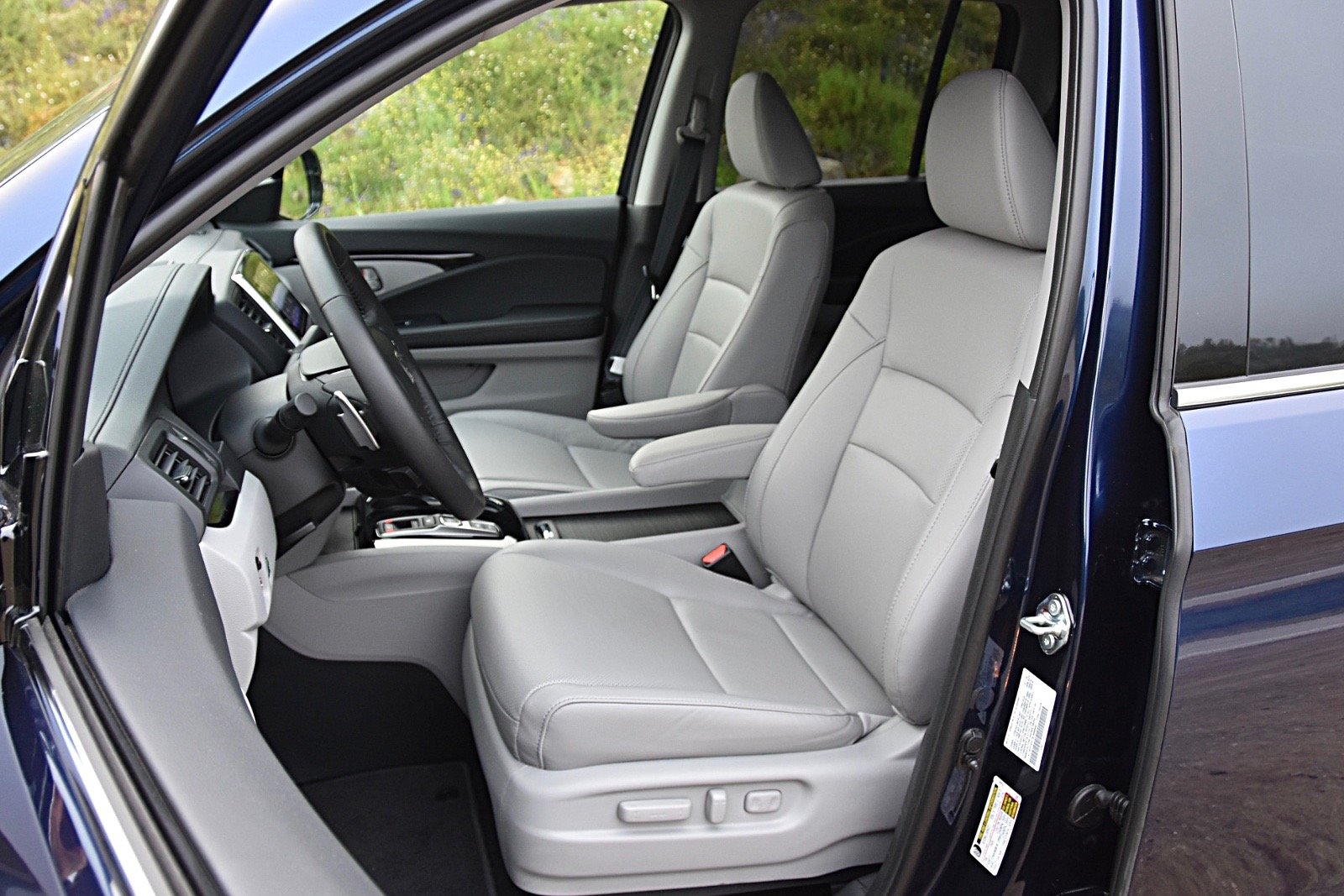 This year, Honda pairs the engine with a nine-speed automatic transmission. It is the same ZF-sourced solution that has required a continuous program of improvement in the Pilot SUV, as Honda sought to improve shift quality. At this point, the transmission behaves well, though after selecting Park, it tends to let the truck roll a bit.

As part of this change, the Ridgeline adopts electronic transmission controls located on the center console, which could aggravate traditional truck buyers. But then, the Ridgeline isn’t made for that kind of person. It has paddle shifters, too, but unless you’re towing, you’re unlikely to use them.

Get Sport or RTL trim, and the Ridgeline is front-wheel drive. Honda’s Intelligent Variable Torque Management all-wheel drive (i-VTM4) is optional for those trims and standard with RTL-E and Black Edition versions of the Ridgeline. With i-VTM4, the Ridgeline’s ground clearance increases to 7.9 inches.

A sophisticated system, i-VTM4 can transfer up to 70 percent of the engine’s power to the rear axle. From there, 100 percent of the power can flow to a single rear wheel for added traction and, on the pavement, a torque-vectoring effect that makes the Ridgeline enjoyable to drive. At low speeds, an electronic Lock function evenly distributes power between both axles. Furthermore, the Ridgeline comes with Eco, Normal, and Sport drivetrain modes and an Intelligent Traction Management system with Snow, Mud, and Sand driving modes.

Collectively, these functions make the Ridgeline more capable off-road than you might guess. And based on my previous experience testing the truck on rugged terrain, it’s going to handle anything that most people are likely to encounter. With that said, it’s not going to win a capability contest when matched up with a Chevrolet Colorado ZR2, Ford Ranger Tremor (new for 2021), or Toyota Tacoma TRD Pro.

Those trucks are not necessarily rewarding to drive on pavement, however, and that’s where the Ridgeline’s independent rear suspension, torque-vectoring all-wheel drive, and multi-purpose platform and engineering shine brightest. You can easily and comfortably drive this truck every day without any compromises in ride quality or handling, and then on the weekend, tackle most of what a conventional pickup can.

The frosting on the cake? The EPA says the Ridgeline all-wheel drive gets fuel economy of 21 mpg combined, and I averaged 20.9 on the testing loop.

If you are planning to tow or haul with a Ridgeline, you’ll want all-wheel drive. That upgrades the tow rating from 3,500 pounds to 5,000, while maximum payload increases from 1,465 pounds to 1,580. 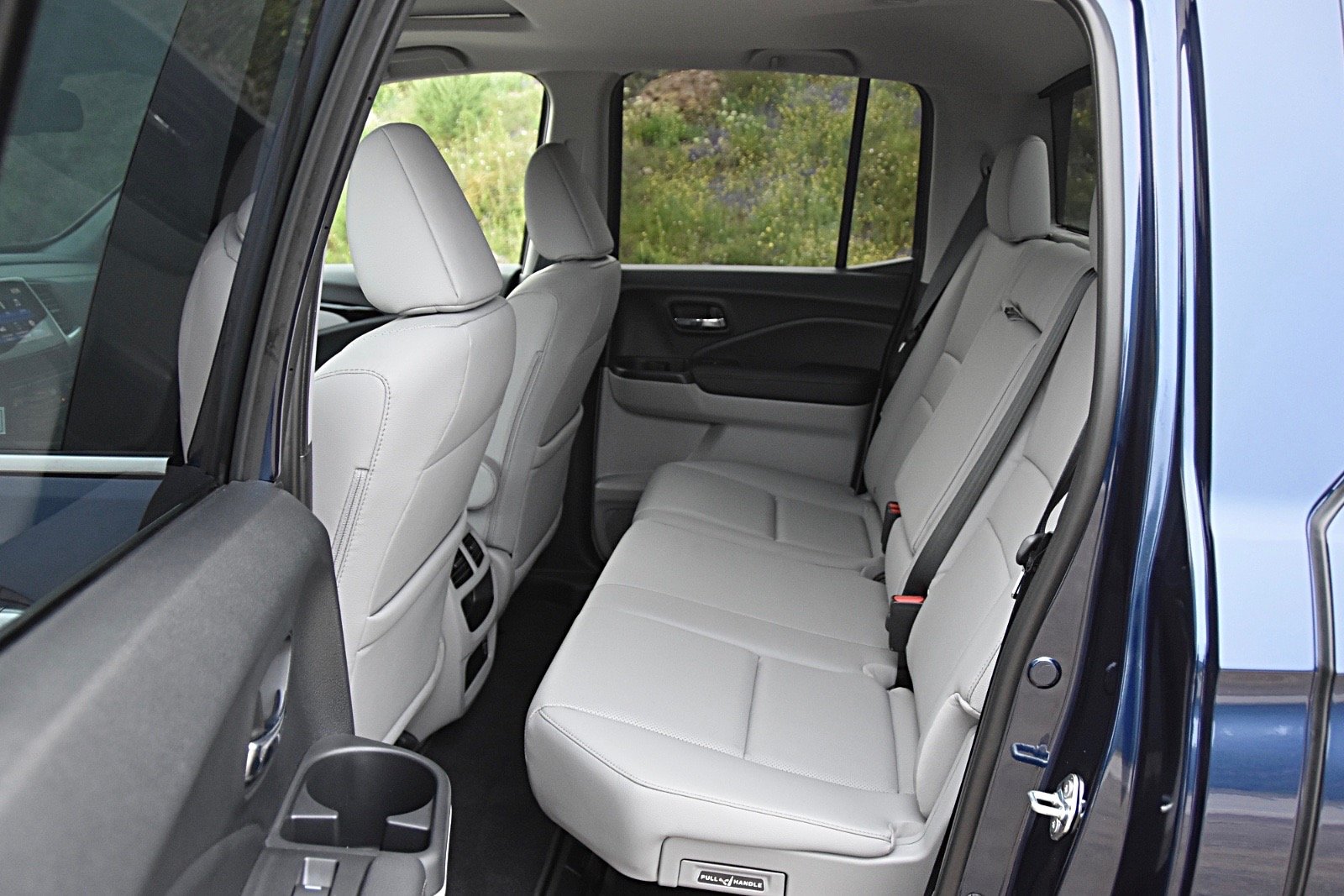 With a Honda Ridgeline, you get all of the comfort and utility of a Honda Pilot but with an open 33.9 cubic-foot cargo bed instead of a third-row seat and an enclosed cargo area.

Up front, the Ridgeline has the same comfortable seats as the Honda Pilot, complete with adjustable armrests that often get in the way. In all trims but the Sport, heated front chairs are standard, and the driver's seat has 10-way power adjustment. Front passengers do not get a height adjuster, but the seat offers enough leg support and a high enough position that the omission isn’t a problem. Front-seat ventilation would be a nice upgrade with the Ridgeline RTL-E trim, though.

Similar to other midsize pickups, the Ridgeline’s rear seat is short on legroom. But the seat itself is comfortable, softly padded front seatbacks are friendly to knees and shins, and there are air conditioning vents to help passengers keep their cool.

During testing, chilly nights gave way to warm late-summer days, and the climate system adeptly dealt with both conditions. However, the slanted sunlight did cause some discomfort with regard to solar heating through the front door glass.

In-cab storage is borderline ridiculous in its generosity. It’s pretty much everywhere, and if you flip up the rear seat cushion, you’ve got lots of weather-tight, locked storage behind the truck’s dark-tinted privacy glass.

The composite cargo bed is more than just a place to carry larger items. The Ridgeline gets a locking, 7.3 cubic-foot in-bed trunk located under the bed floor, and it comes with a drain plug, allowing you to use it as a beverage cooler or hose it out if you place muddy items inside of it.

Additionally, the Ridgeline’s tailgate drops like a traditional truck’s does, and it also swings to the side. Honda locates a 150-watt/400-watt power outlet on the inner part of the bed, and a truck-bed audio system amplifies music to provide a soundtrack to your outdoor activities. 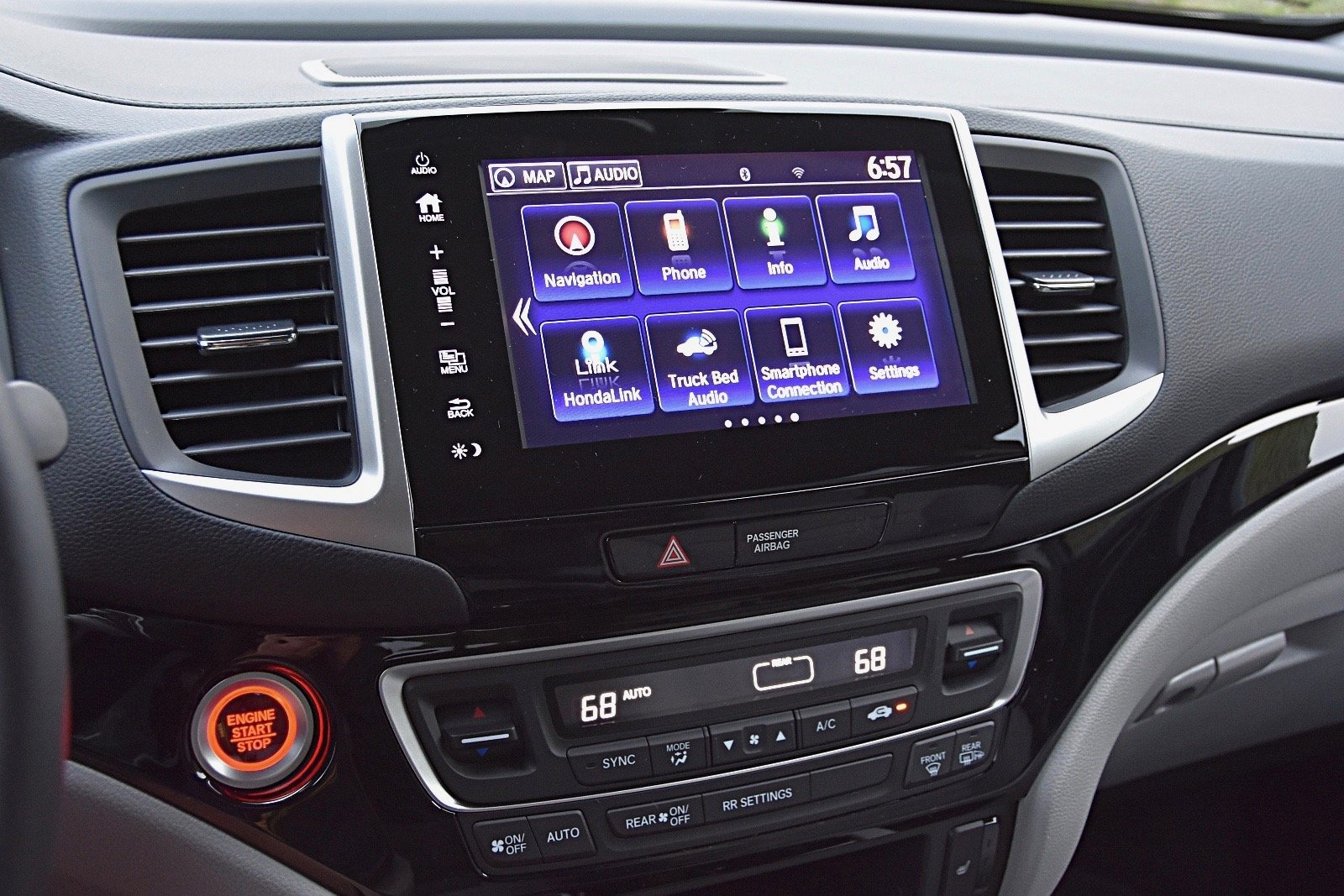 Newly standard, Honda’s Display Audio system features an 8.0-inch touchscreen display mounted under a flush glass panel. Knobs and buttons are missing in action, and the system’s voice-recognition technology isn’t of much help because it requires the speaker to follow specific prompts and is often slow to respond.

Honda equips the steering wheel with stereo volume and tuning controls, and you’re going to emphasize using them. For everything else, you’ll need to be patient. The system does include Apple CarPlay and Android Auto, so you’ll likely want to connect your smartphone and use your device the majority of the time. 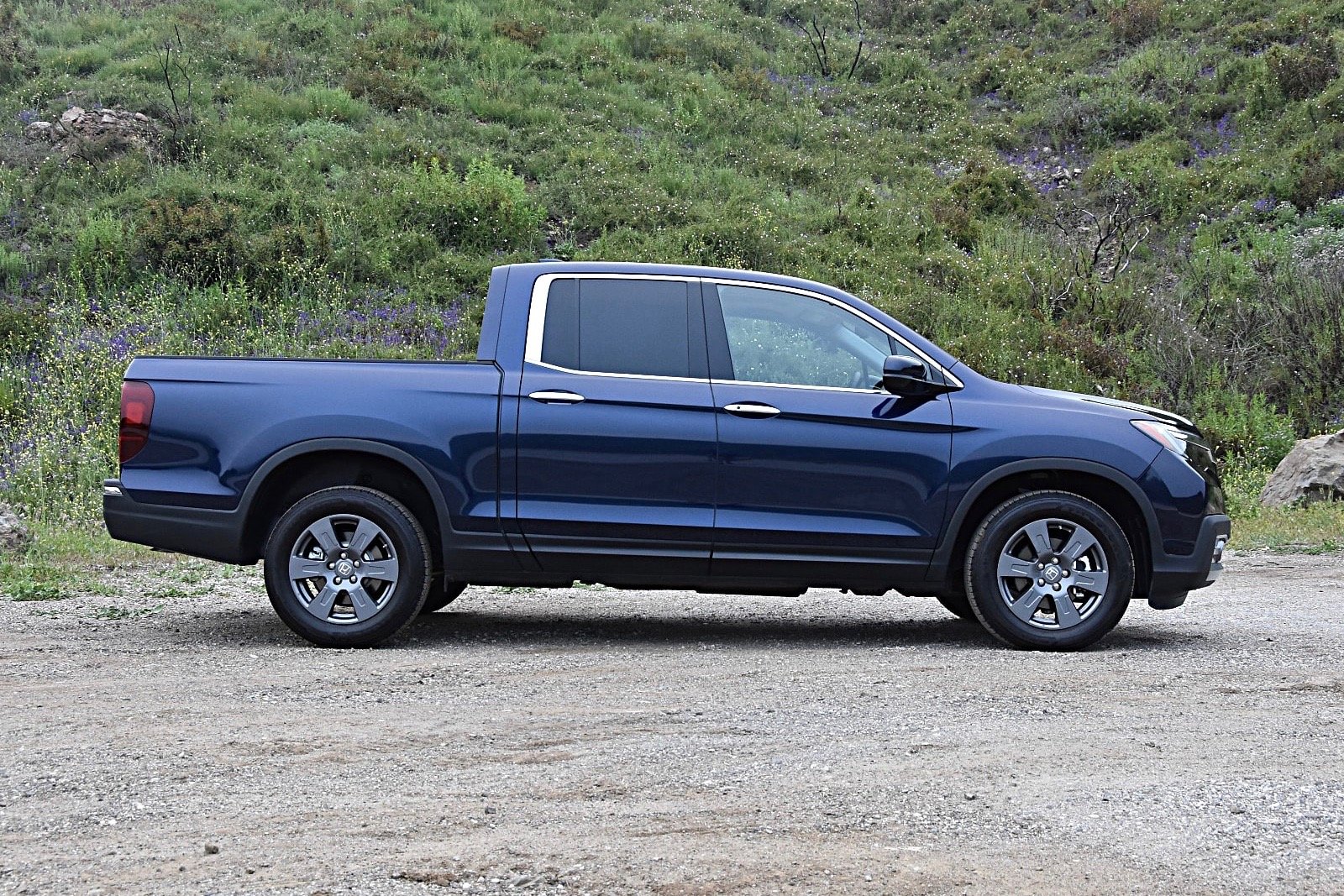 When the driver strays, the lane-departure warning system wobbles the steering wheel, which is not as helpful as a vibration through the rim. The forward-collision warning system is also overeager to issue alerts, and the adaptive cruise control could be smoother in terms of its operation. Overall, it’s better to have Honda Sensing than not, but it could use some improvement.

Crash-test ratings are impressive. According to Insurance Institute for Highway Safety (IIHS) ratings, the truck earns top marks in all but the small overlap frontal impact test for the front passenger, which results in an "acceptable" score.

The National Highway Traffic Safety Administration (NHTSA) agrees, giving the Ridgeline five-star ratings across the board except for a four-star rollover resistance rating, which is better than many midsize pickups. 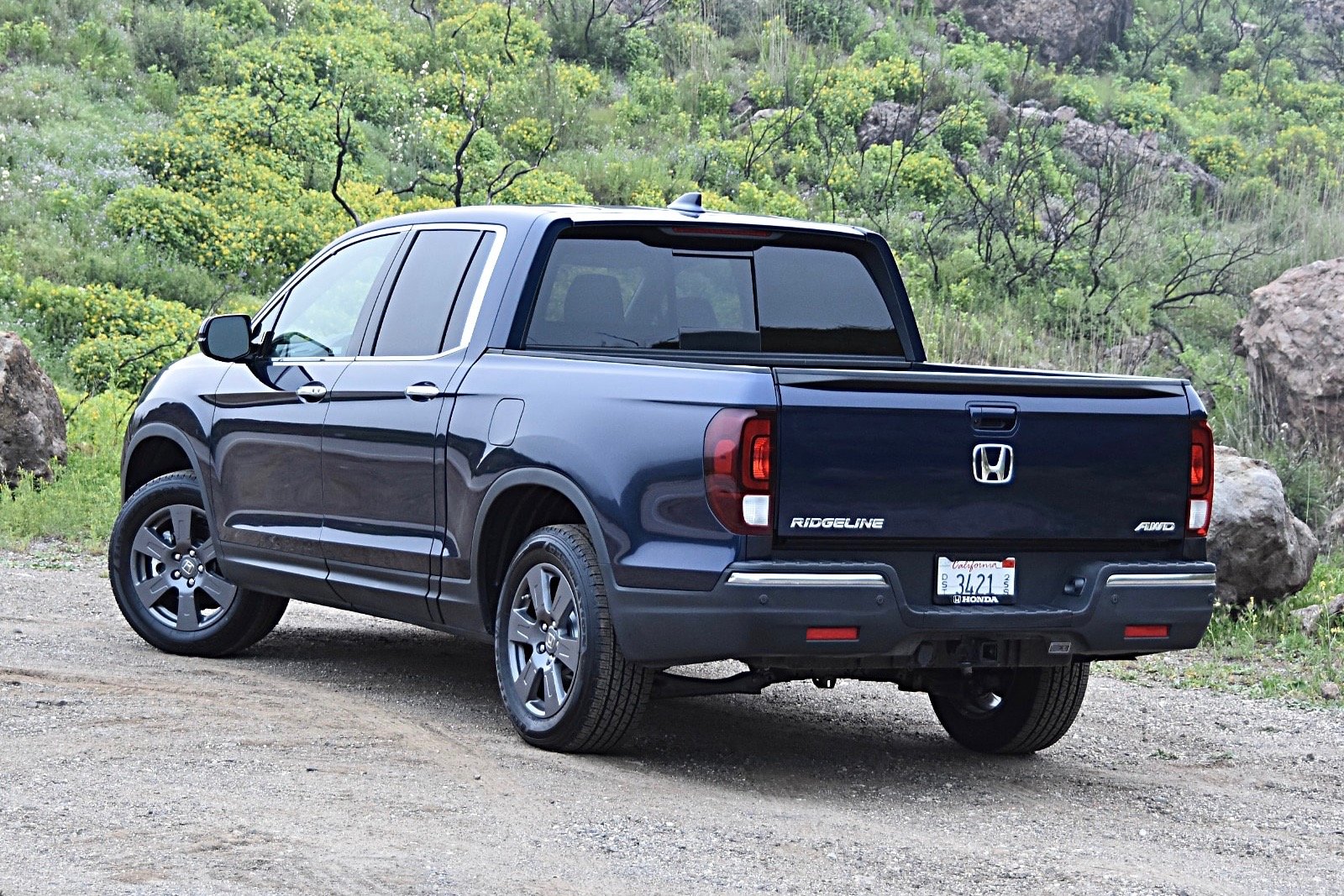 In terms of the base price, the 2020 Honda Ridgeline is among the more expensive midsize trucks you can buy. Add all the extras, as our RTL-E test truck had, and it is competitive against similarly-equipped competitors.

Nevertheless, the real value in choosing a Ridgeline relates to your lifestyle. If you only need a truck sometimes, and the rest of the time you don’t, this Honda is a terrific choice. Especially if you’re not planning any severe boulder bashing.

What's your take on the 2020 Honda Ridgeline?

DLPaul I drive a '17 RTL now and the 2020 upgrades answer most of my wish/complaint list. The increased opening of the rear doors is perfect and that the tailgate locks is what I needed. However I see they did NOT cure the infotainment system. Mine is really slow to react, my phone falls off the system for some unknown reason and it won't recognize it sometimes. And doesn't somebody realize they forgot a knob on the radio?

Guru9ZWFD9 The Honda's Infotainment is ridiculous.

Have you driven a 2020 Honda Ridgeline?
Rank This Car