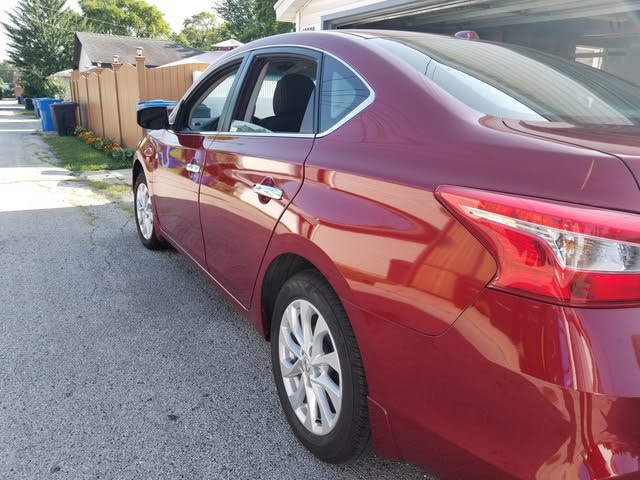 The Nissan Sentra, currently in its 35th year, has long been one of the most affordable models in the compact car segment. The 2019 Nissan Sentra carries over largely unchanged from 2018, in advance of a rumored redesign in the next year. However, Nissan has tweaked the list of standard equipment and added a new special edition to maintain interest.

The Sentra’s exterior carries over from last year, though it still fits well amongst Nissan’s more recently redesigned models. Though the side profile of the Sentra is understated, the front and rear fascias, bumpers, and lighting give it a bolder look. The SR model features exclusive 17-inch alloy wheels and sporty design elements, such as a rear spoiler and side sills. The new SV Special Edition gets 17-inch aluminum wheels and a Special Edition badge. The 2019 color palette is unchanged and consists of Brilliant Silver, Super Black, Aspen White, Gun Metallic, Red Alert, Scarlet Ember, Fresh Powder, and Deep Blue Pearl.

Most Sentra models, equipped with Nissan’s Xtronic continuously variable transmission (CVT), feature a 1.8-liter 4-cylinder engine rated for 124 horsepower and 125 pound-feet of torque, though S models equipped with the 6-speed manual transmission get 130 hp and 128 lb-ft. Sentra SR Turbo and NISMO models get more power courtesy of a turbocharged 1.6-liter 4-cylinder engine, rated for 188 hp and 177 lb-ft. All Sentra models are front-wheel drive (FWD). The most common Sentra configuration, the 1.8-liter engine paired with the Xtronic transmission, is rated for 29 mpg city, 37 highway, and 32 combined, while the manual transmission sacrifices 2 mpg across the board. SR Turbo models have EPA ratings of 27 mpg city, 33 highway, and 29 combined. NISMO models get 25 city, 30 highway, and 27 combined with the automatic, and the manual adds one mpg to the highway rating.

The Sentra has one of the most spacious cabins in the compact car class and plenty of trunk space. The interior is simple and designed for affordability, but there are plenty of upgrades available through various trim levels. Buyers have the choice of base Sentra S, SV, SR, SL, SR Turbo, and NISMO models. Most features are optional on SV models. The SV model includes a proximity key and push-button start. The Sentra SR model gets heated front seats, and the SL features a power-adjustable driver’s seat and a moonroof. Other options include premium cloth upholstery, leather upholstery, and premium cloth sport seats.

All Sentra models come equipped with AM/FM radio, four speakers, a USB port, and Bluetooth. Available upgrades include a 7-inch touchscreen system with six speakers, an 8-inch touch screen system with eight Bose Premium speakers, and SiriusXM satellite radio. For 2019, Nissan makes the NissanConnect infotainment system standard on all but the base model. The system includes Apple CarPlay and Android Auto.

The 2019 Nissan Sentra earns a 4-star overall rating from the National Highway Traffic Safety Administration (NHTSA). The 2019 model has not yet been tested by the Insurance Institute for Highway Safety (IIHS), but the 2018 model earned Good scores in all crash tests conducted. Every Sentra features a reversing camera and models with the Xtronic transmission include automatic emergency braking. Sentra SL models add adaptive cruise control, blind-spot monitoring and rear cross-traffic alert.

Though the Sentra recently has fallen behind its more modern stablemates in the Nissan portfolio, the updates to the 2019 Sentra improve its potential as a value-oriented compact car with a spacious interior and user-friendly tech features.

Have you driven a 2019 Nissan Sentra?
Rank This Car

I keep trying to add photos to my listing but the website isn't adding them. Please assist promptly.

I purchased a new 2019 Sentra 10 months ago. Last week the car wouldn't start. I jumped the battery and took it to the dealership. They thought it might be parasitic draining and reprogrammed the...

I see I am not the only customer of Nissan that is having big issues with my 2019 Sentra. From the day I left the dealer. When I was going to leave I went to back up and the back up camera went all...

I bought a year end 2019 Sentra in January, 2020. It is now at the dealership for the third time because of a dead battery. The battery was replaced after the second episode six weeks ago. The br...