Looking for a Used Nautilus in your area? 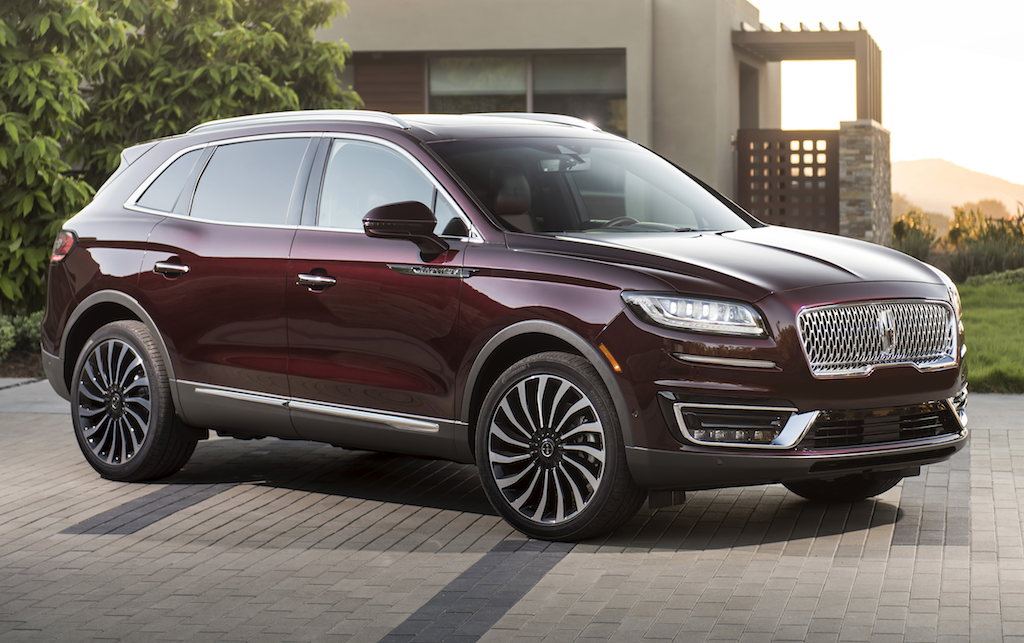 Lincoln’s alphabet soup of car names is no worse than Acura's, Cadillac's, or INFINITI's, and they haven’t done much good for Ford's middling luxury division. The quest to copy European brands by dropping original names for 3-letter abbreviations—MKC, MKT, MKX, MKZ—has confused everyone. The Navigator has become Lincoln's most recognizable modern vehicle, more so than the new Continental sedan, as an ultra-lavish three-row SUV. The Nautilus, formerly the MKX, is a sedate 2-row SUV that’s just gone through an extensive refresh. Not many shoppers know what it is yet, but the significant upgrade warrants your attention. 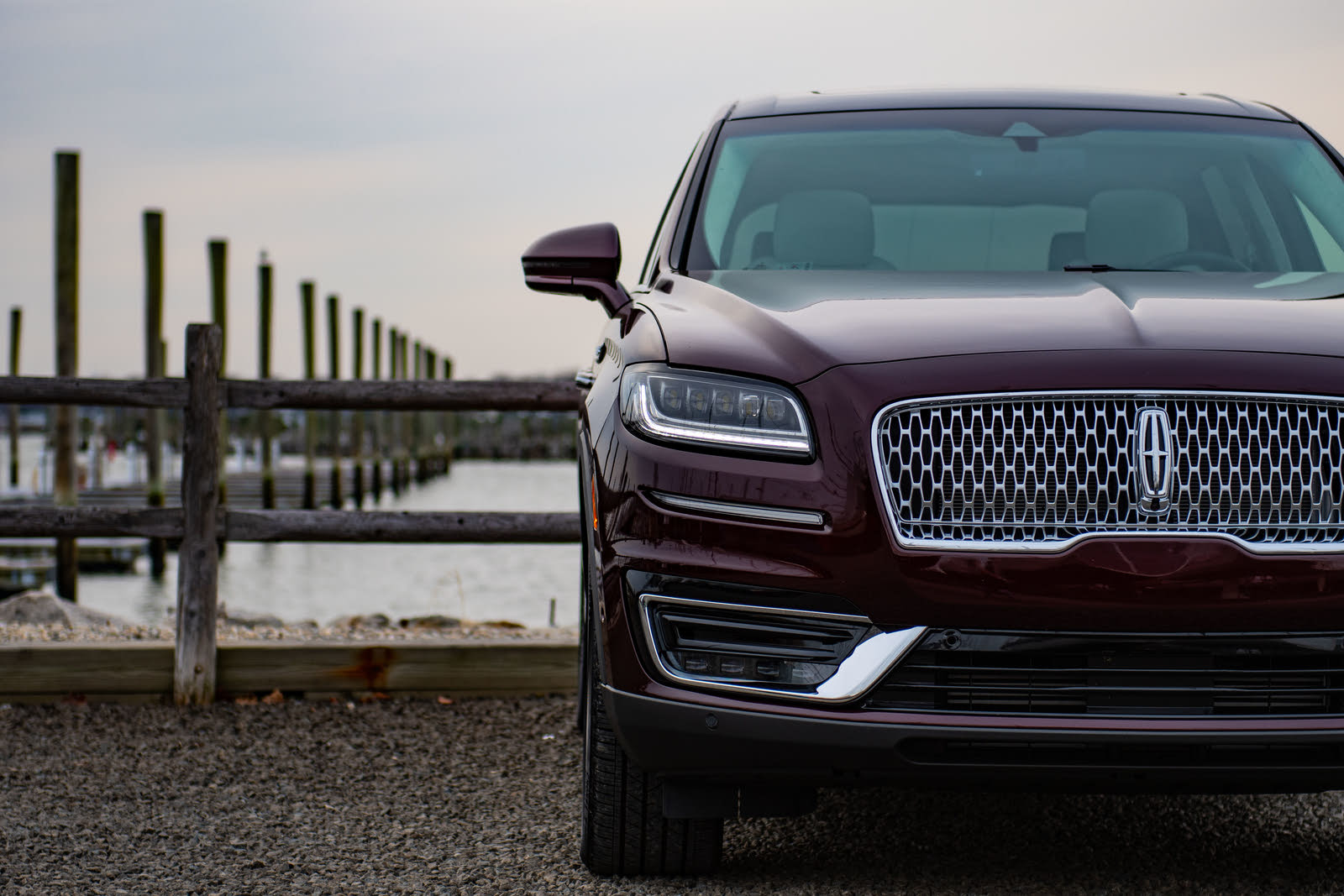 Overall, the Nautilus is little more than an MKX with a new face. But that’s not a letdown. The MKX, last redesigned for 2016, was already a handsome and well-defined SUV. It's far more attractive outside than most of its vaguish competitors, which look like big breadboxes. The proportions of the Nautilus, with its swept roofline, arching rear shoulder line, and slim tailgate, are toned instead of flat and squat. The wide, thin taillight, rear roof spoiler, and our Black Label trim’s 22-inch wheels with 15 curved spokes make everything feel elegant—more so than most Mercedes-Benz SUVs. The new grille and standard bi-LED headlights are the biggest change—the old bifurcating grille is out—while the Nautilus badges on the front fenders are the only giveaways of the car's new name. No matter, it’s just good design.

The theme continues inside with pleasant colors, upholstery, and fabrics. The plasticky center stack is still a letdown, but in Black Label trim, you can overlook that detail for a properly luxe interior. Soft leather, sourced from the same Scottish tannery that supplies Bentley, Aston Martin, and other exotics, covers the diamond-perforated seats. Attractive matte wood lines the sides of the center console, and padded material covers the lower recesses of the dash and doors, where most luxury crossovers line them in hard plastic. A brown-and-black steering wheel with a garnish of wood at the 6 o’clock position, white-stitched leather all over the dash and door tops, and metal trim on the doors with exposed tweeters help this vehicle stand out. Lincoln restricts these finishes and colors to the Black Label trims, yet lesser versions still feel plush enough. 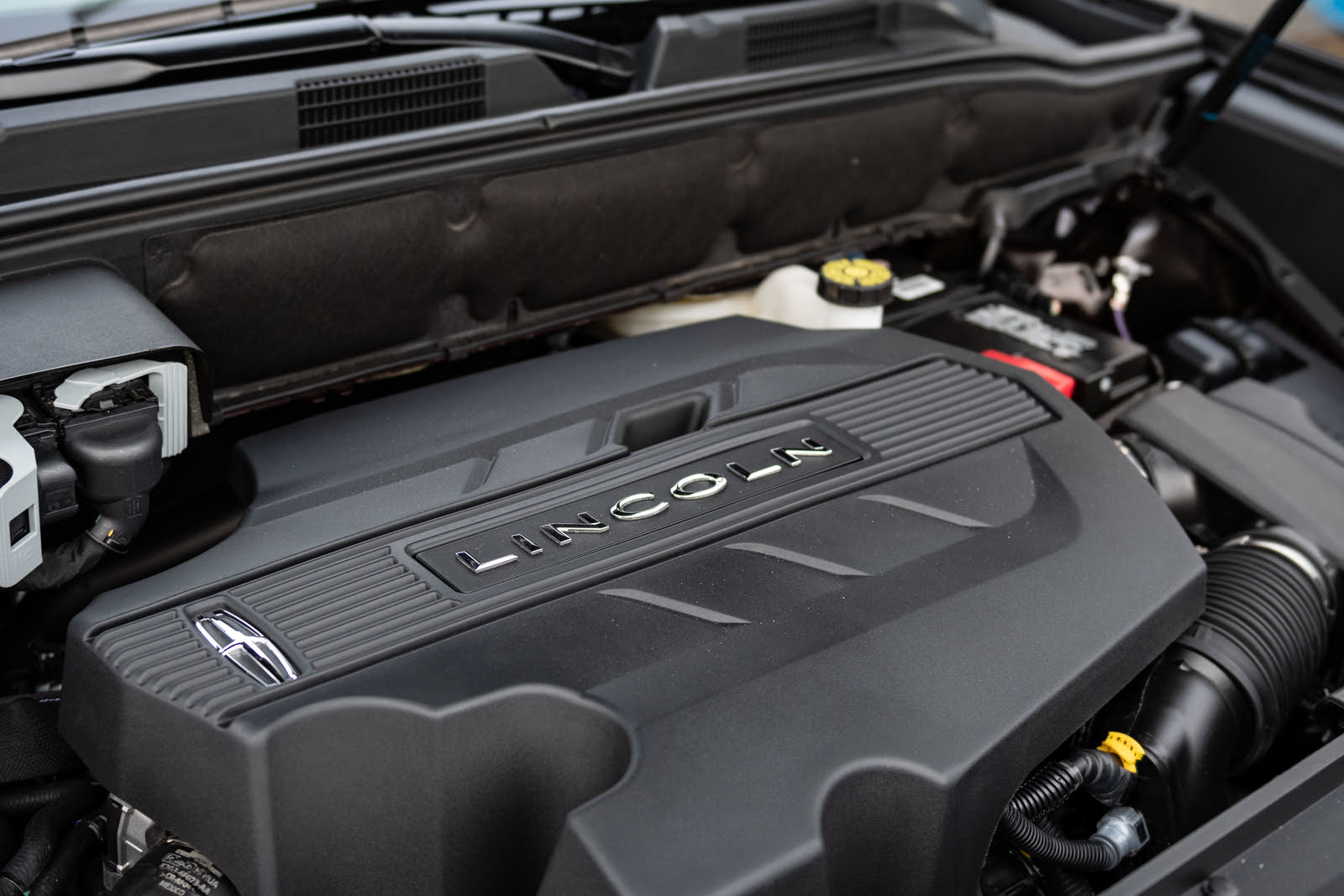 A new turbocharged 4-cylinder base engine replaces the 3.7-liter naturally aspirated V6 from the MKX. We didn’t sample this 2.0-liter turbo four, which makes 250 horsepower and 280 pound-feet of torque. But given the heft of this Lincoln, we can recommend only the optional twin-turbo 2.7-liter V6 with its 335 hp and 380 lb-ft of torque. Combined with a new 8-speed automatic, the Nautilus effortlessly whisks to speed while emitting a muted intake growl. It’s nothing like the 6-speed automatic we tested in the Continental, which never figured out when or how to shift. Aside from a few hard clunks when selecting Drive from Reverse, this transmission never announced itself—which is how all good transmissions should work. Paddle shifters respond well and provide rev-matching downshifts. Front-wheel drive (FWD) is standard, while all-wheel drive (AWD), with or without the V6, is optional on all four trim levels.

The steering effort is light but feels connected to the road, with minimal slack in its initial movement and enough sensation transmitted through the wheel. In Sport mode, the transmission shifts quicker, the steering tenses up, and the adaptive dampers noticeably stiffen, but the Nautilus is not a hustler. It’s a fast mover, preferably in a straight line. Its body roll and brake feel—both soft—will appease anyone coming from a Lexus RX. Also, despite 22-inch wheels, our Nautilus never shook over road imperfections. At higher speeds, the double-paned window glass helped the miles disappear in solitude.

And we drove a lot of miles, although we couldn’t achieve more than 20 miles per gallon in mostly highway cruising. The Nautilus is EPA-rated between 19 and 21 mpg city, 25 to 27 highway, and 21 to 23 combined. That’s about average for this class. 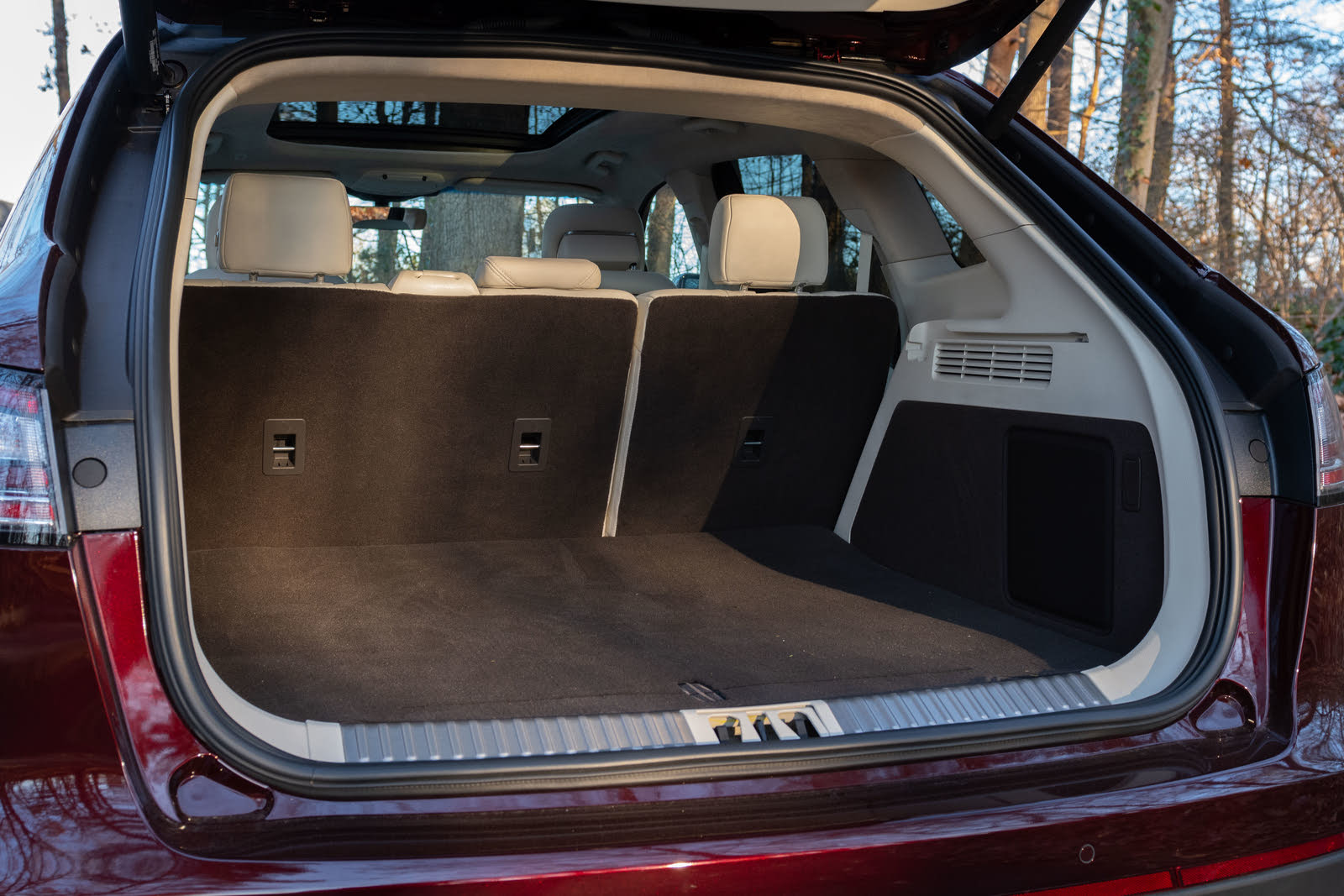 Simplicity reigns inside the Nautilus, whether it’s the all-digital 12.3-inch gauge cluster, the central infotainment screen, or the buttons and switches placed within easy reach of the driver. Really, the only confusing part is the vertical PRNDS gear selector, a series of buttons that don’t react as quickly in an emergency situation as a traditional console shifter. Aside from that, there’s no clutter or need to dive into submenus of submenus to make minor adjustments, aside from Lincoln burying the driving modes deep within the instrument panel.

Space is generous, front and rear, with reclining rear seats that can fold forward with the touch of a button in the cargo hold. With the seats down, the Nautilus can take 68.8 cubic feet, but with them up, it can fit 37.2 cubic feet. The power tailgate comes standard with a foot-operated gesture control that proved reliable over dozens of tries. Visibility is also sufficient, and when it’s not, the rear backup camera has a built-in washer. Big consoles (including in the lower section by the driver’s knees) can swallow just about anything, while USB ports are handy just underneath the sliding central cover. 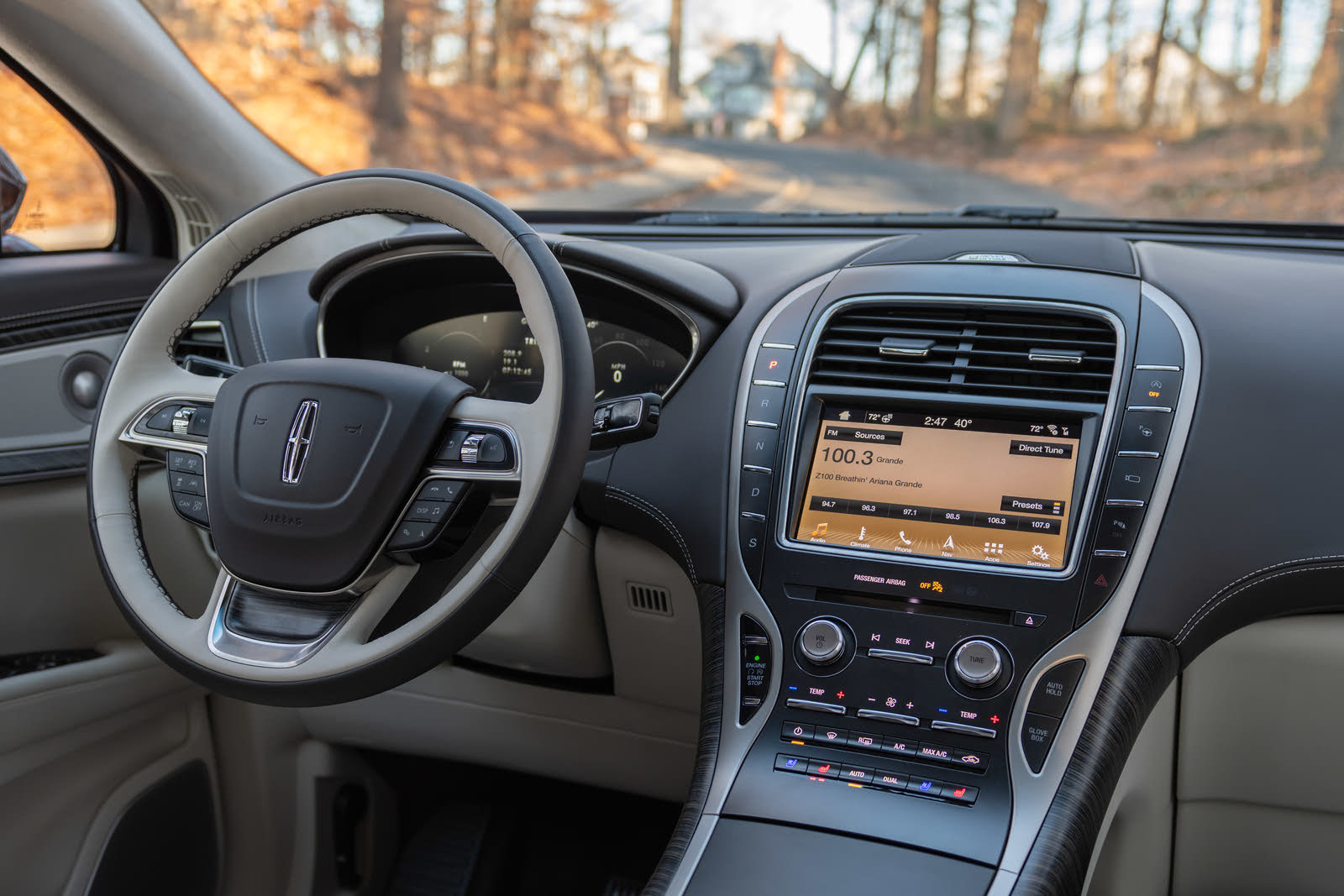 Lincoln shares its Sync 3 infotainment with Ford (save for a color swap from blue to gold), and it is a winner. It’s simple, fast, and never sluggish, whether it’s moving from the navigation map (with pinch-to-zoom functionality) or connecting a device to the car’s built-in Wi-Fi network. Apple CarPlay and Android Auto come standard, as does the ability to have Waze take over the factory navigation without resorting to either of those smartphone interfaces, a very user-friendly feature. Amazon Alexa commands are also supported, which means you could instruct the car to turn on a smart home thermostat. More approved apps can be downloaded onto a compatible smartphone, which can also run a companion app for remote functions like unlocking, stolen-vehicle tracking, and maintenance, through which a Lincoln dealer rep can arrange to drop off a loaner car straight to your home or business. Remote start, proximity entry, and a wireless charging pad come standard.

The digital instrument cluster is much improved from earlier iterations, with more ways to customize the graphics and the ability to select music, directions, and phone contacts from the steering wheel, although it’s still not as customizable as it could be. Some people may not like the “spotlight” effect that dims the surrounding gauge numbers until the needle reaches them. The turn-by-turn directions aren’t as easy to follow as those in a Mercedes or Audi, either. However, the 19-speaker Revel Ultima stereo and configurable LED mood lighting are fine consolations.

True comfort comes from the optional $1,500 front seats that integrate 11 air cushions and offer 22 ways of movement. Thigh extensions, thigh and side bolstering, 4-way headrests, and a multitude of lumbar and massage functions are all available (and thankfully, all easily managed via the seat’s physical controls). The Driver Assistance package brings an adept semi-automated driving function that can brake and steer the Nautilus in low- and high-speed traffic on marked highways. It’s not as full-featured or predictive in nature as similar systems from Mercedes, but consider this another worthy feature to remove some commuting stress. 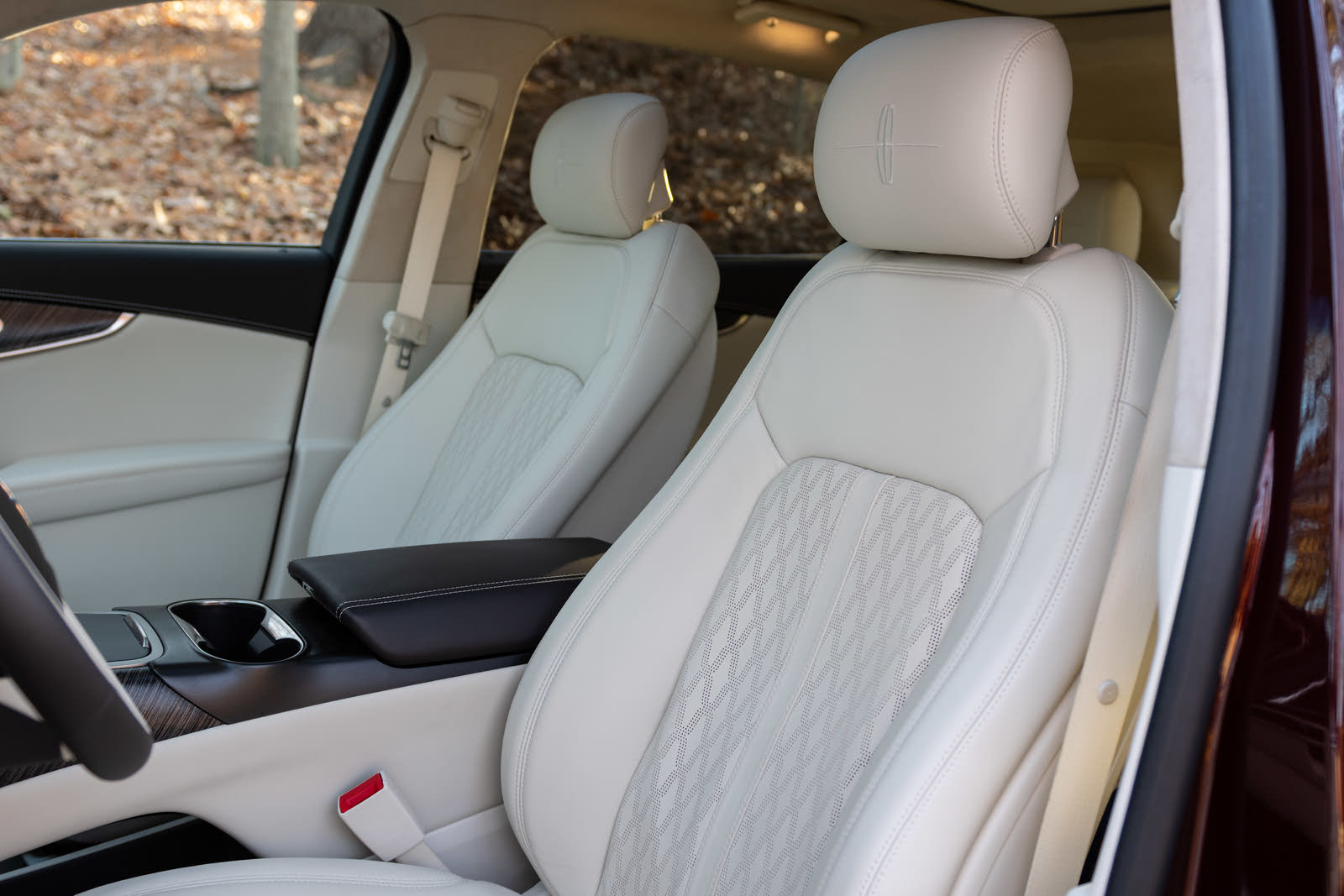 The Nautilus has not been tested by the National Highway Traffic Safety Administration (NHTSA) or the Institute for Highway Safety (IIHS). However, NHTSA crash-tested the mechanically identical 2018 MKX, and it scored the maximum 5 stars in all seven categories. The IIHS awarded the 2017 MKX a Top Safety Pick for scoring the top Good rating in all six crash tests and another top Superior rating for its crash-avoidance features. Forward-collision alert with automatic braking, pedestrian detection, lane-keep assist, and blind-spot monitoring are all standard. The Driver Assistance package adds adaptive cruise control and an evasive steering assist, which can help guide the driver around an obstacle in the road. 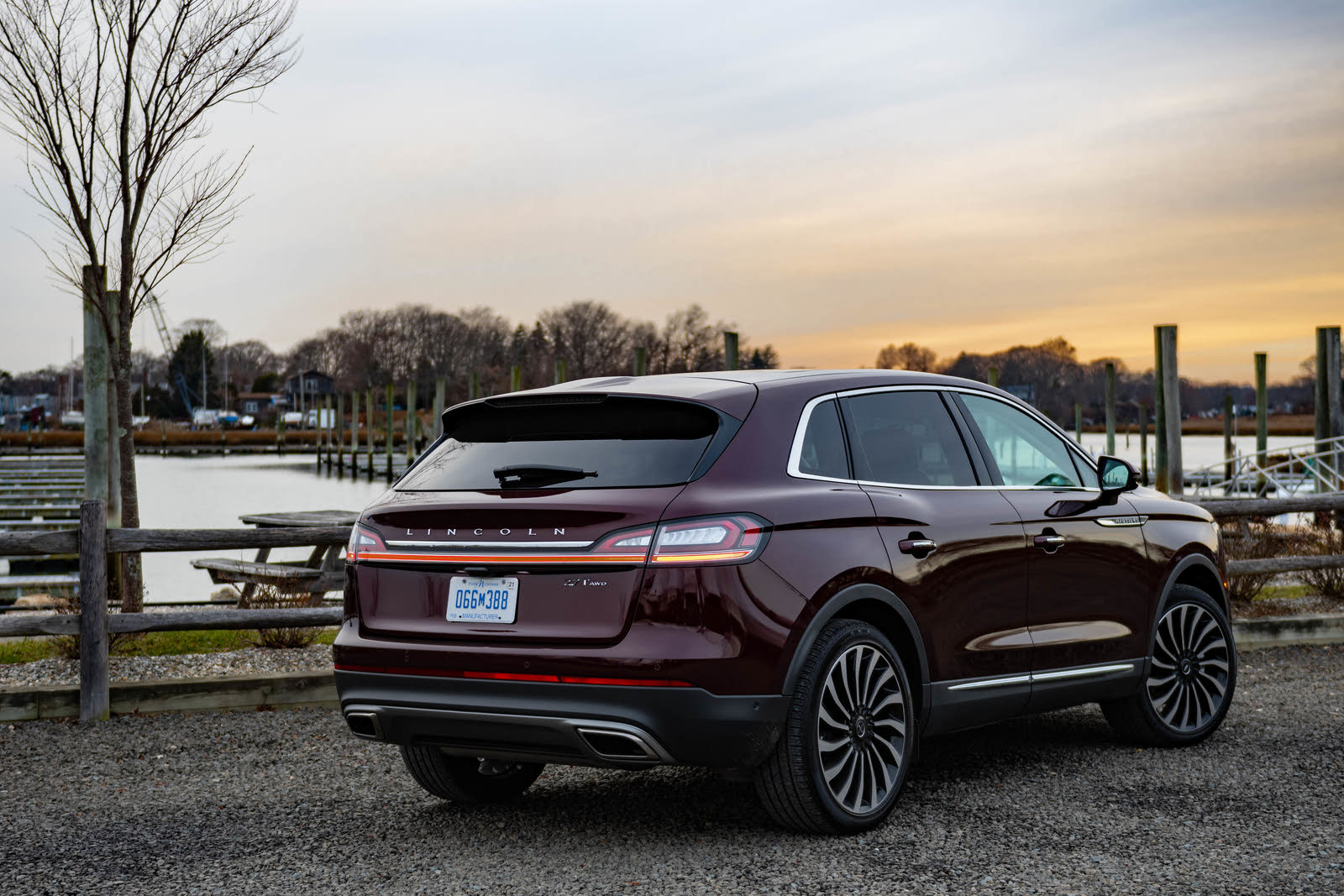 Unlike the Continental, the Nautilus feels worthy of its price—which is neither bargain basement nor excessive. Our loaded Black Label topped out at $67,265 with destination. Compare that to the smaller Jaguar E-Pace and Infiniti QX50, neither of which offer the interior quality of this Lincoln. A Mercedes GLE can be had for this cost, but without most of Lincoln’s considerable options. The 2019 Nautilus starts at $40,340, while the mid-range Select and Reserve rise into the mid to upper 40s. The Black Label is a minimum $57,000 affair, which also includes 4 years or 50,000 miles of scheduled maintenance and perks like unlimited car washes. Before driving the Nautilus, we weren’t sure if its equipment, performance, and pricing would be competitive. But with its new name comes newfound respect for this Lincoln.

What's your take on the 2019 Lincoln Nautilus?

April Its Great. Smooth ride, responses very well. you do not notice any issues on the road your traveling over. inside is great. more room than you need. air is cold, so no issues in those states that have hot summers.. would recommend this vehicle.

April smooth ride, really. my dealership had to give me one as a loaner for my escape died, so this is what i got. If i could buy it I would.. Have had Lincolns, Mercurys, and Fords most of my life. Well worth the price and what it gives you.

Have you driven a 2019 Lincoln Nautilus?
Rank This Car

Looking for a Used Nautilus in your area?

I had a question that I was wondering what would be the answer to this question. Which one is better between the 2019 Lincoln Nautilus vs. the 2019 Vovlo XC60 in terms of safety, luxury, reliabili...

Does the 2019 Nautilus have a 3rd row seat ? The gal next door is going to buy or lease very soon, I'm helping with things like this !