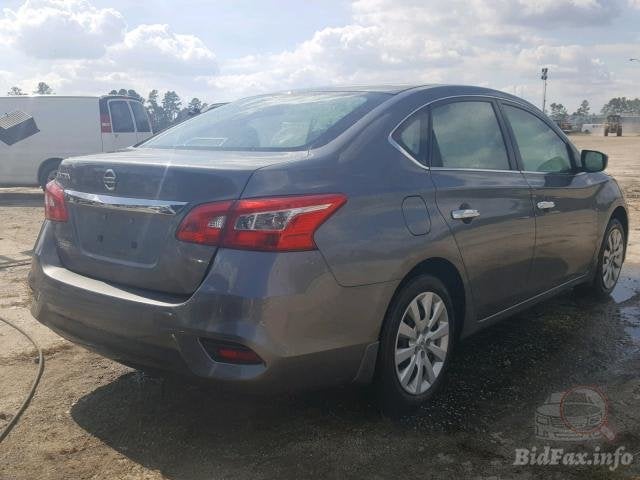 Average user score
4.9 ⁄ 5 stars
Based on 15 reviews
Review by GuruMCJMC — It was great experience. the vehicle was just as described, clean, and it looks like its well maintained. But I bought another vehicle from there that I also liked. Read more
Review by Travstar55 — Nismo....nothing else needs to be said here to know its a great car Read more
Review by GuruJLQX8 — Great vehicle well designed could be a bit more roomier for price. Read more

Nissan has grown steadily but significantly in overall sales volume over the last few years, aided in large part by the current seventh-generation Sentra. In 2016, the Sentra received a moderate facelift that included a new fascia, front and rear lights, and wheels. For 2017, Nissan has added a brand new sporty SR Turbo trim—its first turbocharged Sentra for U.S. markets. The 2017 Sentra is still available in S, SV, SR, and SL trims, with an all-out NISMO performance version in development.

Under the hood of the Sentra is a conventional 1.8-liter 4-cylinder engine that makes 130 hp and 128 lb-ft of torque when mated to a 6-speed manual (available only on the S trim) and 124 hp and 125 lb-ft of torque when paired with a continuously variable transmission (CVT). Fuel-economy figures are 29 mpg city, 37 highway, and 32 combined with the CVT and 27, 35, and 30 with the manual. The new SR Turbo, meanwhile, is also available with a 6-speed manual or a CVT and features a 1.6-liter direct-injected 4-cylinder engine also used in the Juke crossover. This unit makes 188 hp and 177 lb-ft of torque, which is a sizable increase compared to the standard Sentra but still not enough to turn this 1,900-pound car into a speed demon. Potential buyers should expect the SR Turbo’s fuel-economy figures to drop a few points and should also factor in the extra cost of premium fuel.

All Sentras come with Normal, Eco, and Sport driving modes selectable via a small button on the dash that alter throttle response and shift timing. The SR Turbo also gets suspension, steering, and brake upgrades to improve the driving experience, but those who want a serious front-wheel-drive (FWD) compact car will almost undoubtedly prefer the quicker and more focused Mazda Mazdaspeed3, the Ford Focus ST, or the upcoming Honda Civic Si. Like the 2016 Sentra, the 2017 model features a speed-sensitive power-steering system and brake-controlled steering assist, which applies the brake on the inside front wheels during cornering to more effectively take a tight turn. Trims below the SR, however, still have to make do with rear drum brakes instead of the upgraded 4-wheel disc brakes.

One of the Sentra’s biggest appeals is its interior room. The back seat is especially roomy for all but the tallest passengers, and 2017 Sentras have extra room in the center console. Trunk space is also among the best in class, and all Sentras include split-folding rear seats. The cabin is quieter now as well, thanks to added insulation and thicker laminated glass. Cloth upholstery is standard, but leather is an option for the SR and SR Turbo trims and comes standard on the SL. The S trim’s features are limited but include cruise control, keyless entry, and Bluetooth, while the SV adds a rear-view camera, Siri Eyes Free, and push-button start. The SR and SR Turbo add sporty external bits like 17-inch wheels, chrome exhaust tips, and a mild body kit as well as internal comfort features like premium cloth sport seats and heated front seats. The SL further adds leather seats, dual-zone climate control, NissanConnect with navigation, and a power-adjustable driver’s seat. Extra options include a moonroof and an 8-speaker Bose sound system.

With a Top Safety Pick+ rating from the Insurance Institute for Highway Safety (IIHS), the Sentra excels in the safety category—although it didn’t perform as well in National Highway Traffic Safety Administration (NHTSA) tests. A range of safety technologies called “Safety Shield” were introduced for the 2016 Sentra and are still available on the 2017 model, including forward emergency braking, adaptive cruise control, blind-spot monitors, and rear cross-traffic alerts.

Although the Sentra is one of Nissan’s stronger sellers, it’s up against increasingly tough competition from the likes of the Toyota Corolla, Honda Civic, Hyundai Elantra, Chevrolet Cruze, and even the Mazda3. While the new SR Turbo does broaden the Sentra’s appeal slightly, true driving enthusiasts will likely want to wait for the NISMO version to really consider a Sentra. Even so, the Sentra ticks all the right boxes in terms of practicality, safety, and economy in the $20,000 compact bracket.

TheHorror This Sentra worse than both the recently-departed Dodge Dart and Mitsubishi Lancer. Stay away if you value build quality and driving engagement. The one thing it has in it's favor is a good-sized rear seat for the class.

erothie I love my Sentra. It handles well, very comfortable and has plenty of room. I bought it used -it had been a rental and I believe I received a great deal.

Users ranked 2017 Nissan Sentra against other cars which they drove/owned. Each ranking was based on 9 categories. Here is the summary of top rankings.

Have you driven a 2017 Nissan Sentra?
Rank This Car

Went to start my car and the breaks were locked up and the push button wouldnt turn the car on. Everything else seemed to light up, but ultimately the car wouldnt start. Any suggestions? It is in th...

My nissan will hit 2000 rpm which averages around 65 to 70 miles and hr. The car wont accelerate. It is as though the gas is not pressed then it will kick in and engage. As speed increases it will ...

22 views with 4 answers (last answer about a week ago)

How Much Transmission Oil

How much transmission oil going into 2017 Nissan Sentra SV CVT

The factory radio and backup camera will not turn on. I checked all the fuses and their good. Does anyone know how to fix this? Or is there other fuses or relays I should check?

I drive a 2017 Sentra SR and just replaced the engine air filter last week, ever since I replaced my tach will randomly jump up while driving at constant highway speeds, it will jump up to around...