The 2017 Kia Soul corners the market on boxy hatchbacks. 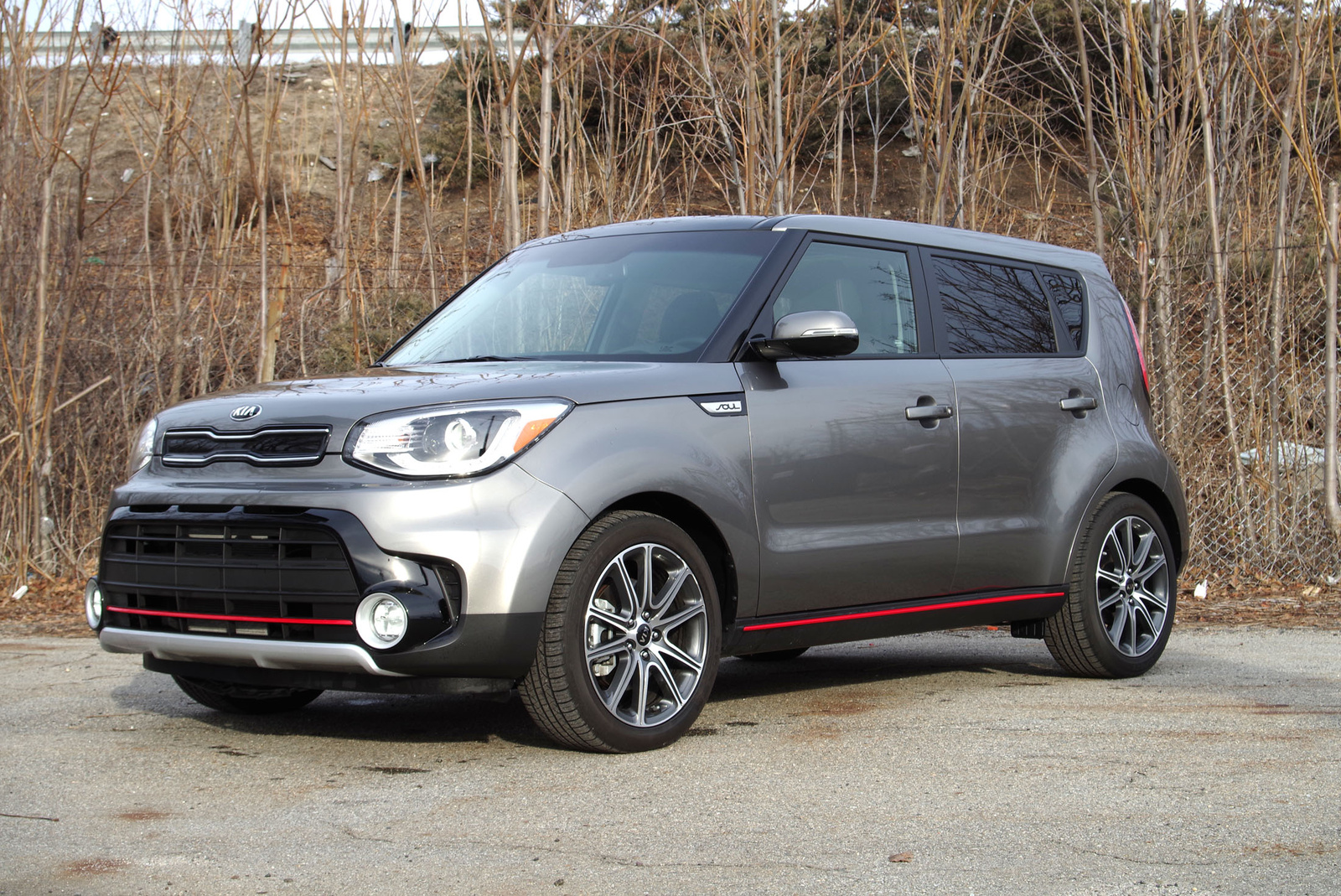 The Kia Soul returns for 2017 with an optional turbocharged engine, updated looks, and new technology. Although it remains the quirkiest option in its price range, this squared-off car is decidedly average when it comes to performance and features. Stacked up against its competition, the Kia Soul stands out for its looks—but not for its value. 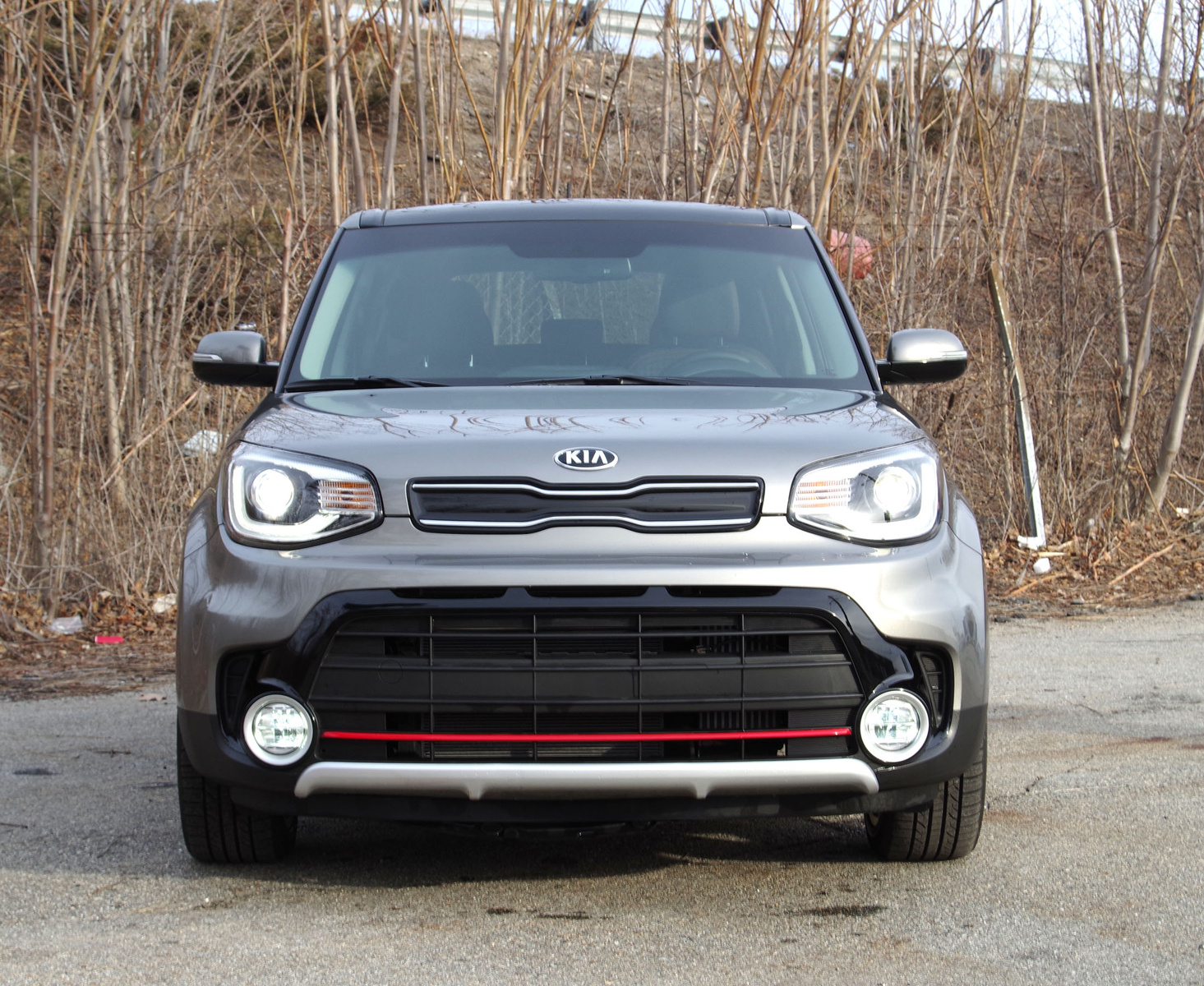 After seven years and two updates, the Kia Soul is in a class of its own. Boxy competitors like the Scion xB and Nissan Cube are dead, leaving the Soul the only squared-off hatch standing.

Although the car was refreshed for 2017, only the most devoted Kia enthusiast could spot the differences. The most noticeable changes are embellishments like chrome trim, plus LED turn signals, indicator lights, and taillamps.

The Soul got even fewer changes inside, but that’s not a problem. Kia has drastically improved the fit and finish of all its cars over the past five or so years, and even the relatively inexpensive Soul has benefited. That means the plastics have interesting textures and gaps are at a minimum. The optional leather-trimmed seats feature contrasting stitching and offer enough support to be comfortable on a long drive.

The overall interior aesthetic is sleek and straightforward, with only fleeting glimpses of the nonsense carmakers once used to attract younger buyers. For instance, multicolored lights that ring the in-door speakers can pulse to the beat of the music—or Morning Edition. 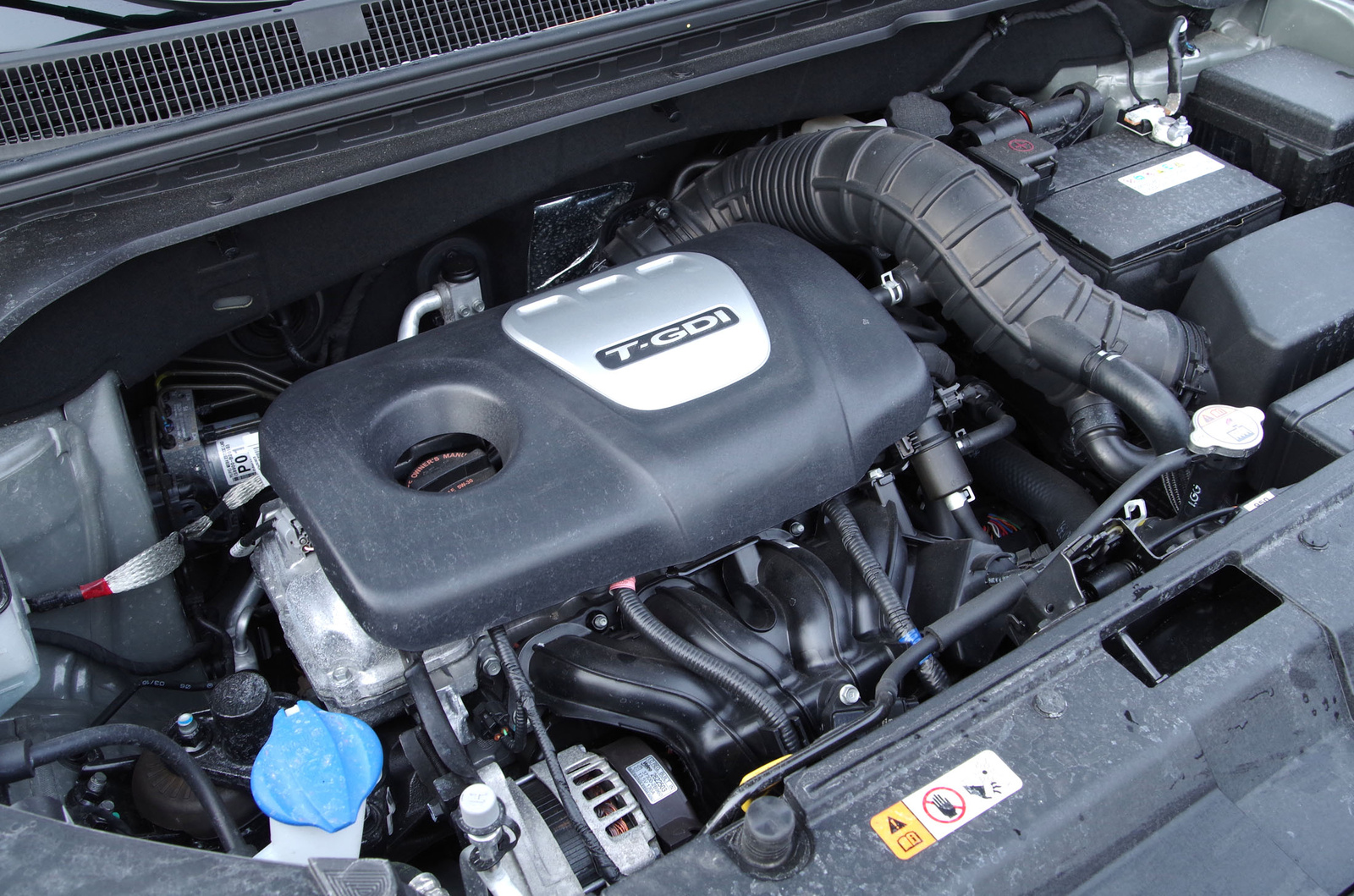 The 2017 Soul comes in three trims. The base version starts at just $15,990, and it comes with a manual transmission and a 1.6-liter, 130-hp 4-cylinder engine. The only upgrade you can get is an automatic transmission for $1,600—a spec that’s likely to be found in airport rental lots.

The Soul + ($19,560) gets a 2-liter, 161-hp 4-cylinder engine and comes only with an automatic transmission. Most buyers who opt for the Soul Plus will likely do so for the option packages it unlocks, not the extra power.

Finally, there’s a new choice—and it’s the car I reviewed: It’s called the ! (Kia says it’s pronounced “Exclaim”), and it’s the most powerful Kia Soul ever made. That’s because Kia turbocharged the entry-level engine, upping the horsepower to 201—and the price to at least $22,600.

But even with the extra oomph of a turbo and an exclamation point on the window sticker, the Soul won’t make drivers shout for joy. It rides high, and its steering is too light to feel sporty.

At the same time, the new engine is occasionally too powerful for the rest of the car, and the front wheels are likely to spin off the line if there’s a hint of moisture on the road. But the turbo does give a little extra power for merging into traffic more easily or carrying lots of heavy furniture back from Ikea. 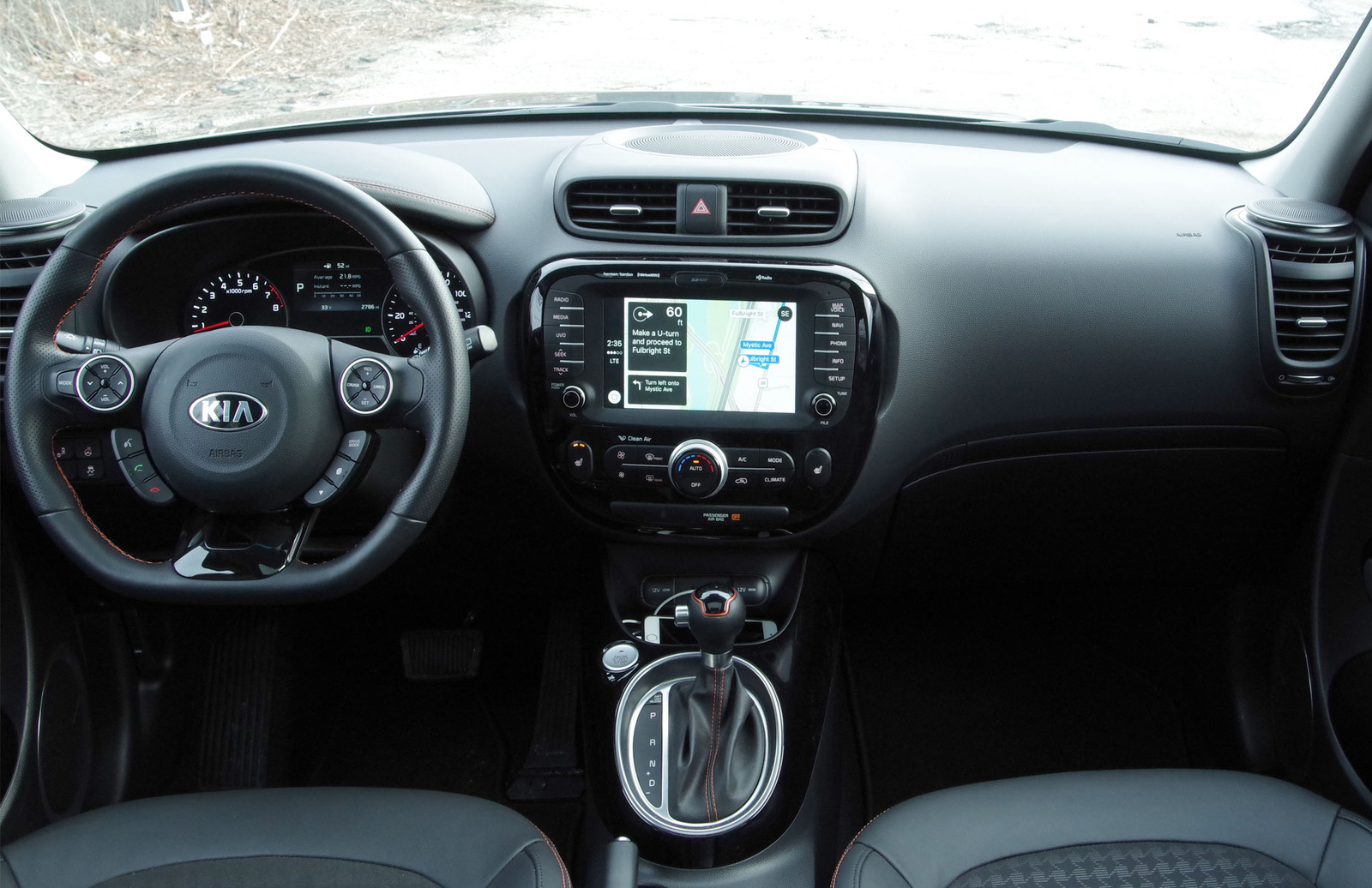 Still, no matter how pleasant it is, the Soul fails to excel in any particular category. For instance, Kia calls it a crossover, but all-wheel drive (AWD) isn’t on the Soul’s long list of potential options.

And although it has a decent amount of front and rear legroom, the shorter and narrower Honda Fit has 3.2 more cubic feet of cargo space with the rear seats folded than the Soul.

Another surprise: The Soul’s short wheelbase may make it easy to maneuver, but it was almost impossible to see out the back without the rear-view camera—and those nonexistent bumpers mean a parking-lot tap could be a costly repair.

Finally, the Soul is lacking when it comes to fuel efficiency. I averaged just under 25 miles per gallon in a week of combined city and highway driving, which isn’t great for such a small car. 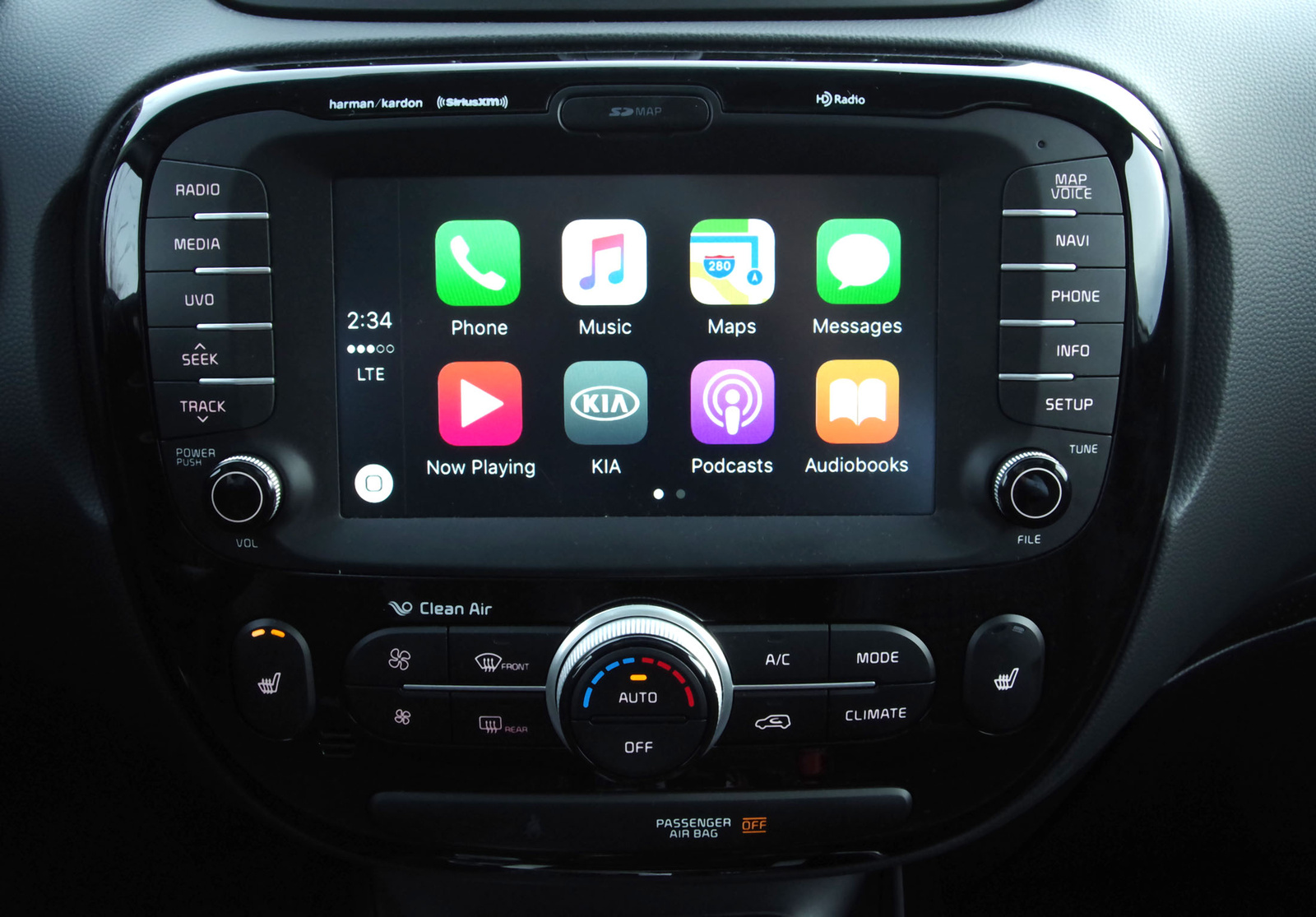 Aside from the turbo, perhaps the biggest upgrade the 2017 Soul can get is an optional touchscreen that’s compatible with Android Auto and Apple CarPlay. So equipped, you can access smartphone functions like Siri, Google Maps, Spotify, and podcasts right on your dashboard.

Even if you don’t spring for standalone navigation, both services let you search for destinations and get directions using your phone—all through voice control. For example, if I want to go to a local coffee shop, all I have to do is press the voice-recognition button on the dashboard and say, “Siri, get directions to the closest coffee shop.”

To get Android Auto and CarPlay, you just have to spring for the $1,000 Uvo package, which also adds Kia’s own telematics setup. Called Uvo, that system can remember where you parked and tell you if your car needs service. You can even schedule that service from your dashboard using the Uvo app. And if your teenager is driving, you can set limits on where, when, and how fast the car can be driven.

The Uvo package is available only for the Plus, but I think that’s reason enough to upgrade from the base version. 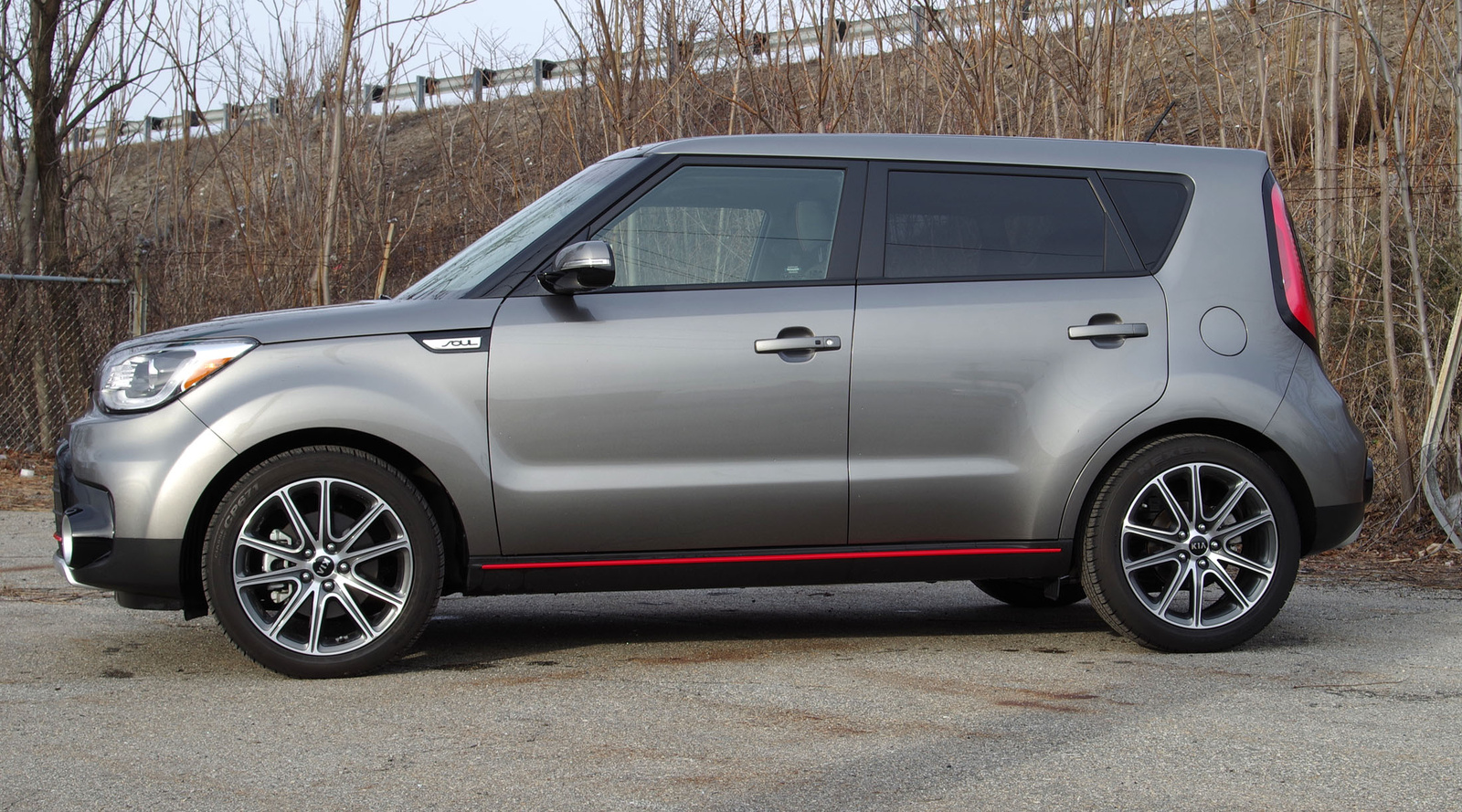 Overall, the 2017 Soul does fine in crash tests, but lags when it comes to active safety. That’s the reason it lacks the Insurance Institute for Highway Safety’s coveted Top Safety Pick+ badge.

A reversing camera is optional, as are lane-departure and forward-collision warning systems. But the real kicker is a lack of automatic emergency braking—a must-have to get top honors from the IIHS. Even though semi-autonomous features like active cruise control and active lane assist are becoming commonplace options in inexpensive vehicles, they aren’t available on the Soul.

Otherwise, the IIHS rates the Soul as Good on all crash tests. According to the National Highway Traffic Safety Administration (NHTSA), the Soul earns 5 out of 5 stars for head-on and side-impact collisions—and 5 stars overall. It gets 4 out of 5 stars on NHTSA’s rollover test. 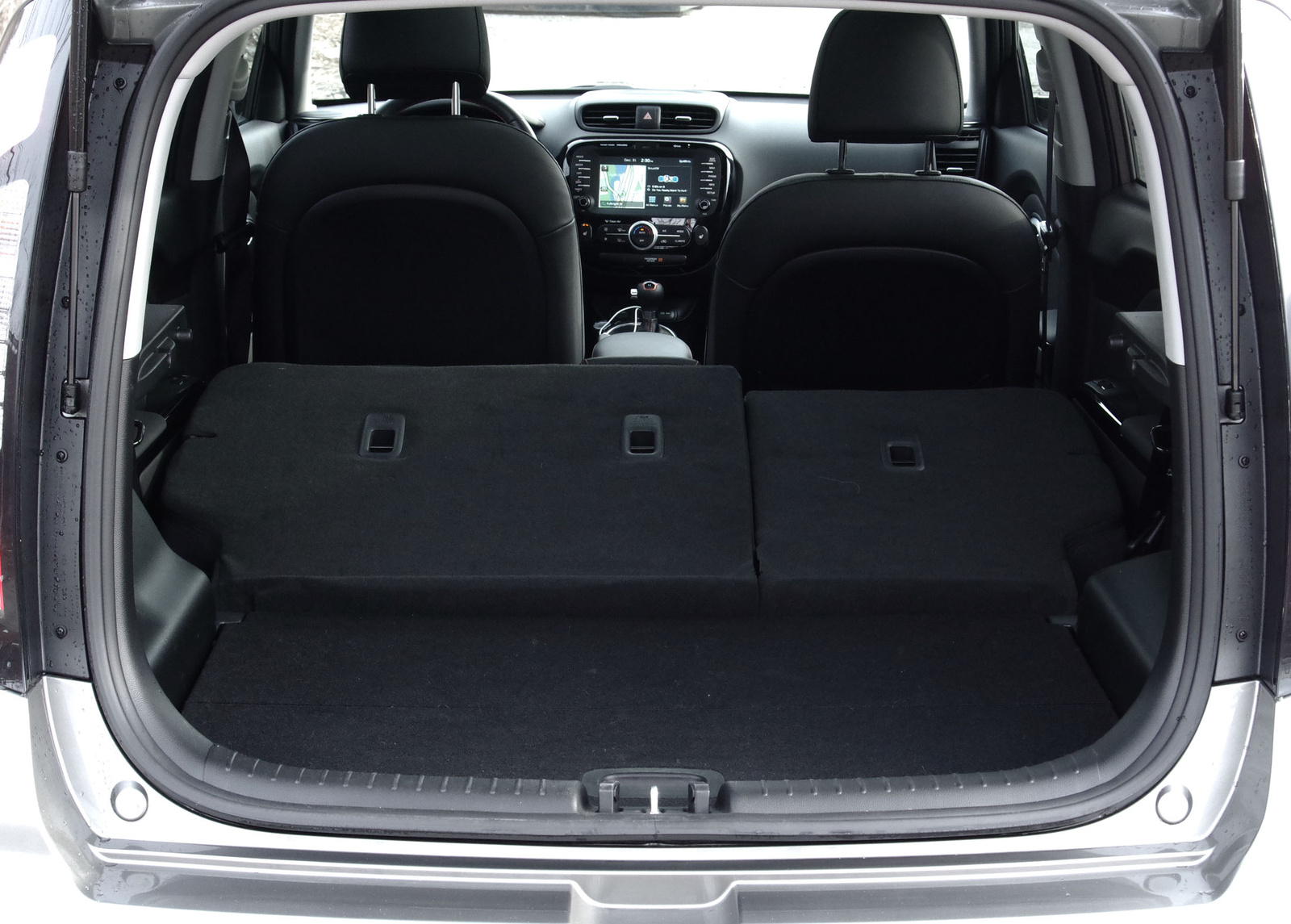 While the Soul might not have any direct competitors, it’s still worth taking a look at cars that cost about the same.

I’d recommend driving a Volkswagen Golf—which is more fun to drive—or a Honda Fit, which is a better value. If gas mileage is important to you, take a spin in the all-new Toyota Prius. It more than doubles the Soul’s miserable fuel economy and—surprisingly—has sportier handling.

It’s also possible to get a compact crossover with AWD for the same price as a Soul. Check out the Honda HR-V, Kia Sportage, Subaru Crosstrek, or Mazda CX-3. And if it’s personality you’re after, the MINI Cooper Clubman has it to spare.

If you do decide on the Soul, just remember that a well-equipped version won’t come cheap. Add extras like folding mirrors, 20-inch wheels, and a heated steering wheel, and it’s easy to push the price up past $27,000.

TheHorror You must own a strange toaster, Alpine.

Does This Site Ever Contribute To Necessary Recalls?

Including myself, in a short time of owning a Kia soul plus (a 2017 Kia Soul)has been out long enough for the kinks to be worked out. There are way too many review were‘s reporting what I can only...

Why hasn’t the clock been working for weeks on all Kias?

Clock Not Working On Kia Soul

So apparently I'm not the only one whose clock quick working :-) WTH

Time On Your Site

If a car has been on your site for 148 days but at a specific dealership for less time, what does that mean? Was it at another dealership for the time difference? Thank you