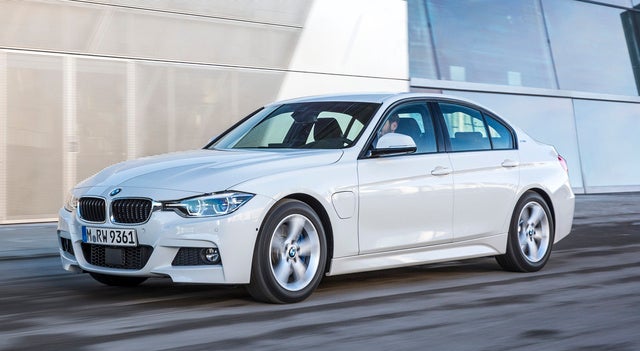 The F30/F31 version of the BMW 3 Series came out in 2012, and it represents the same tempting balance of luxury and performance that has made the 3 Series popular for decades. While the car has gotten a bit bigger and softer over the years, it hasn’t lost that essential sports-sedan character that made it an industry favorite in the first place. It’s been three years since BMW introduced the 4 Series, and the 3 Series remains limited to 4-door trims. An all-new 3 Series may arrive for 2018, but for 2017 there are still some significant changes, at least under the hood. Trim levels include the base 320i, the 330i, the 328d diesel, the 330e plug-in hybrid and the 340i. Body styles include a 4-door sedan and a station wagon. There is also a hatchback version called the Gran Turismo, which is treated as a separate model.

None of the 2017 3 Series engines is particularly thirsty, and they all have notably smooth power delivery for turbo motors. The thirstiest is naturally the powerful 340i, but even it gets 24 mpg city/36 highway/28 combined, and the 338d will do 32/42/36 with RWD. The 330e, meanwhile, will do 72 MPGe, can go up to 75 mph on electric power alone, and has up to 14 miles of electric driving range.

The 3 Series has long been praised for its sharp handling, poise, and balance, particularly with the rear-drive cars. The newest model has electric power steering and is a bit softer than some of the 3 Series cars of the past, but the same spirit's still there, and it’s still a fun car to toss around corners and blast down a country road. Variable sport steering is an option, and a Driving Dynamics control system allows the driver to toggle between Eco Pro, Comfort, Sport, and Sport+ modes via a switch beside the driver’s knee. Handling is further aided by the M Sport package, which drops the ride height by 0.4 inches, firms up the suspension, and comes with larger anti-roll bars and M alloy wheels. A Track Handling package added last year also comes with variable sport steering, an M Sport suspension, and blue brake calipers.

Considering the significant purchase price and the BMW badge on the nose, a base 320i doesn’t come with as much as you’d think, but you’re not likely to find any bare-bones trims on the lot anyway, and the list of luxury equipment quickly adds up. Anyone familiar with BMW’s iDrive system will feel right at home, and the infotainment's new 5.0 version is in the 2017 model–anyone not familiar with the system, on the other hand, may take a while to get used to it. Different options are bundled in a number of other packages, including the Luxury, Lighting, and Cold Weather Packages, in addition to a Sport package that comes with sport seats. The Premium package is the most significant, adding leather, power front seats, keyless ignition, a moonroof, and satellite radio. Wireless phone charging and a Wi-Fi hotspot are also available.

As far as space goes, there's plenty of it, for the most part, although rear passengers will certainly have less legroom than they do in larger executive cars. Of particular interest to people who take driving seriously but also need a little extra cargo capacity is the 3 Series wagon. Hardly any manufacturers offer a proper, usable wagon anymore, as most Americans have turned their attention to crossovers. The BMW, then, is refreshing in that it features lots of extra storage space without sacrificing ride height, style, or driving pleasure. Unfortunately, though, the wagon is only available with the 4-cylinder engines in the 3 Series range.

Other than a Marginal in the small frontal-overlap test, the BMW 3 Series has gotten mostly Good ratings in Insurance Institute of Highway Safety testing and 5 stars overall from the National Highway Traffic Safety Administration. Some of the available advanced safety technology comes in the Driver Assistance package, which includes a rear-view camera with parking sensors, while a Driver Assistance Plus package adds a surround-view camera, a blind-spot monitor, lane-departure warning, and an active collision-mitigation system.

A base 320i starts at just above $33,000, as noted, and the lineup runs to almost $50,000 for a 340i xDrive. While the competition has gotten better over the years, the 3 Series is still a standout and one of the benchmarks to which other sporty luxury cars are compared. BMW’s model range is also so vast that there's now something for everyone, from the fantastic performance of the M2 to the extra room of the X3 or X5. The 3 Series, though, is still at the heart of it all.

Greg This is a very well-written and concise description of the differences between the 3-series models. Thanks, Andrew!

Users ranked 2017 BMW 3 Series against other cars which they drove/owned. Each ranking was based on 9 categories. Here is the summary of top rankings.

How Do I Set My Listing To Public Not Private?

my listing was private, and i received no inquiries. How do i make it public?

What's The Difference Between Private Vs Public Listing On Car Gurus?

my vehicle for sale shows up under "private" listings. i have had zero responses. How do i change to public listing? Thanks

How Often Do You Change The Oil In BMW 330I

BMW 330i Vs X3 Have Better Front Visibility