Toyota's Tundra rolls into 2016 with an upgraded Entune system, plus a larger gas tank and integrated brake controller for upper trim levels. 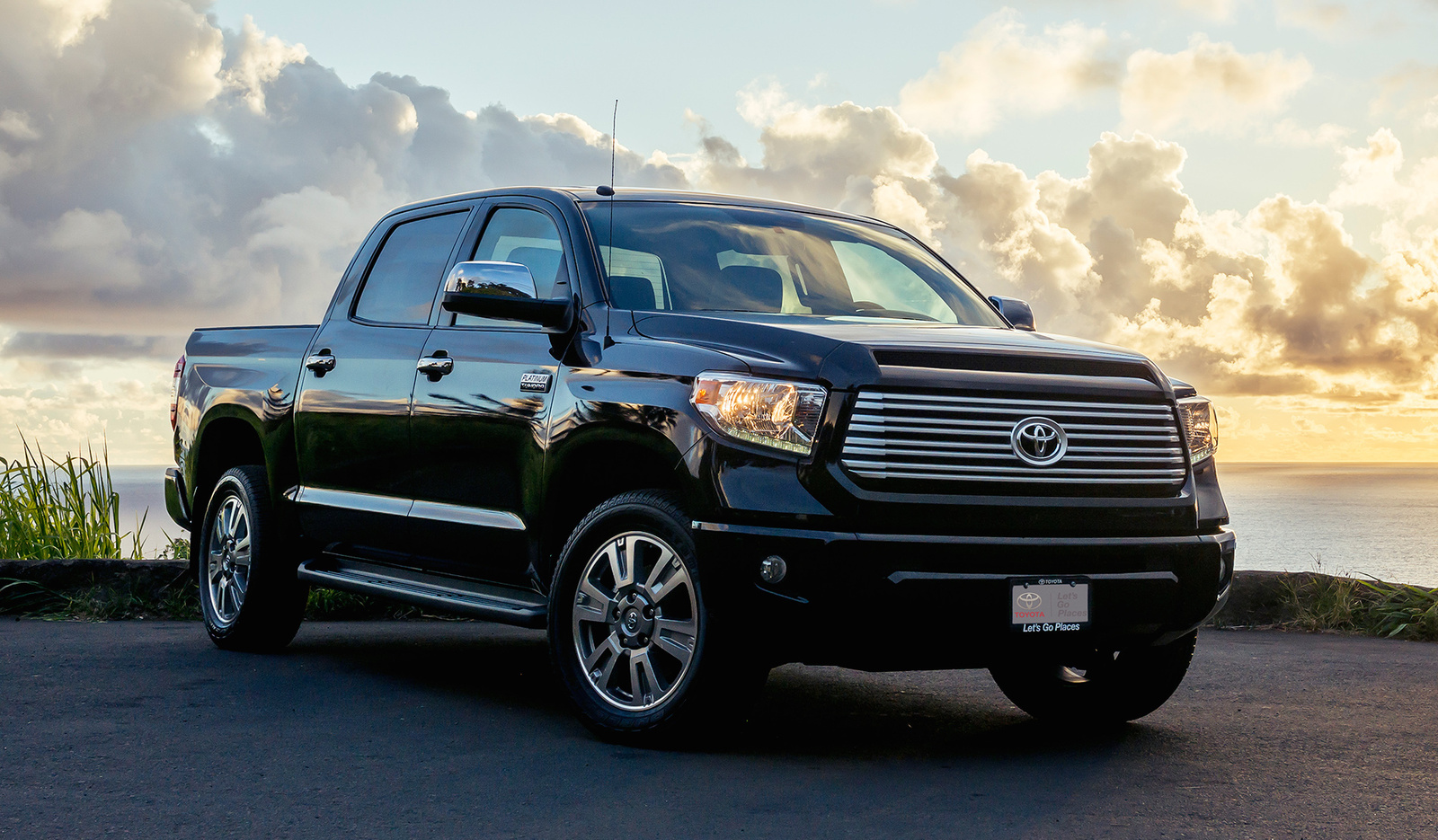 For the most-profitable segment of the American car market, full-size trucks, competition is fierce and pressing ever forward through fresh styling and new technology. Unfortunately, the 2016 Tundra just isn’t able to keep up with its rivals who have more recently upgraded powertrains for better fuel economy as well as body and suspension enhancements for a better ride. That said, the Tundra is still a capable and good-looking vehicle for those who still remember what it was like to drive a truck. 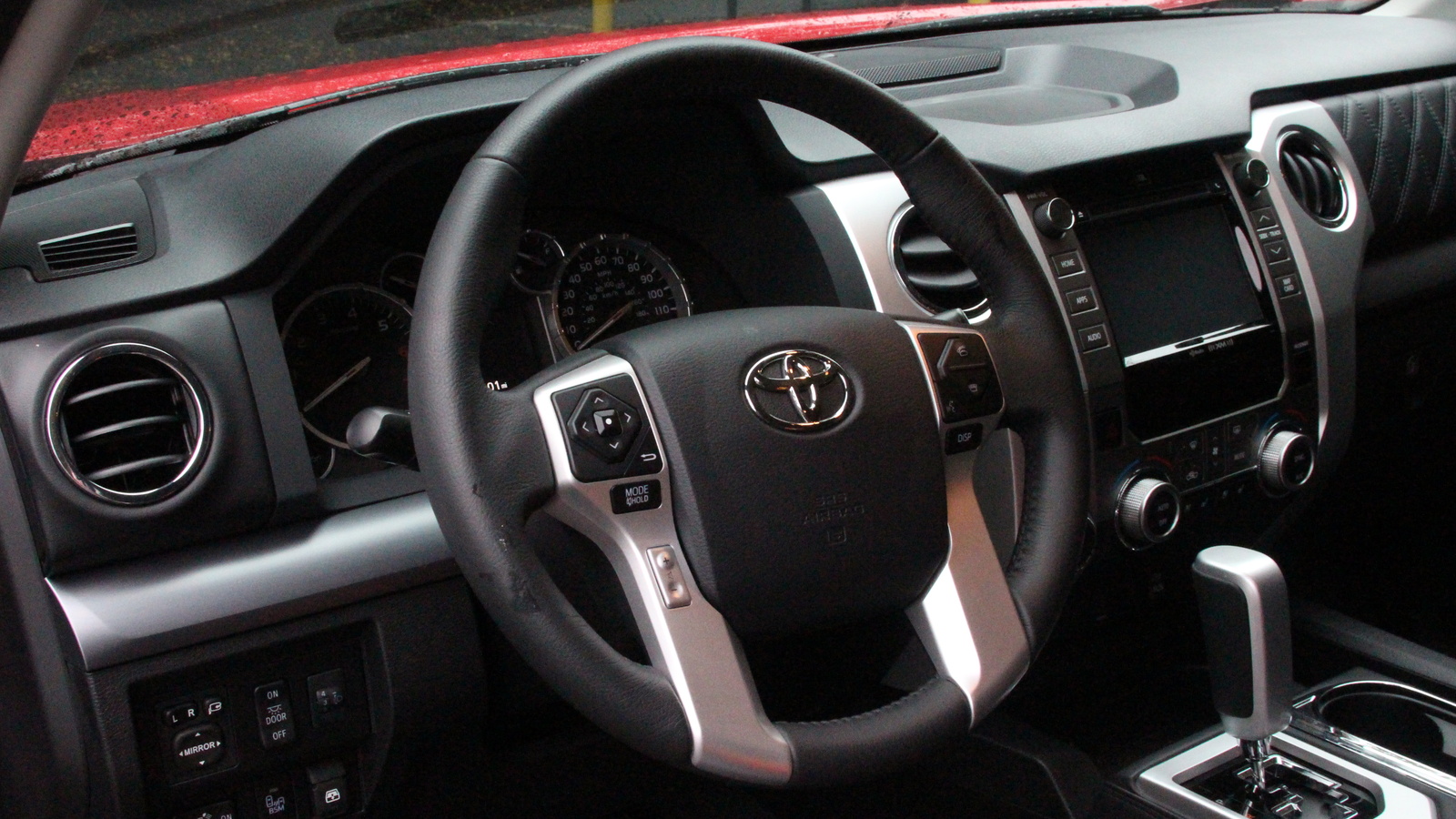 From the outside, the Toyota Tundra looks like a stout competitor for the Silverado, the Ram, or even the class-leading F-150. But beneath the skin, there’s a different story to be told. With a capable but aging suspension setup and last-generation engine choices, the lines quickly form between it and the competition.

Style isn’t an issue for the Tundra, with a modern exterior and an attractive interior. Utility is also a strong point here, with a pair of grunty V8s managing to keep up with competitors' offerings with regard to towing and an off-road-capable suspension even in stock form. However, it’s in fuel economy and ride where the Tundra really falls behind, with alternatives managing to show what next-gen really feels like.

I spent a week with a 4WD CrewMax version of the Tundra, decked out in Platinum trim, which means you get 4 full-size doors and an impressively spacious back seat, a 5.5-foot double-walled bed, and the 5.7-liter V8. With no cash options checked and a $1,195 delivery fee, the total walkaway price came to $50,275. 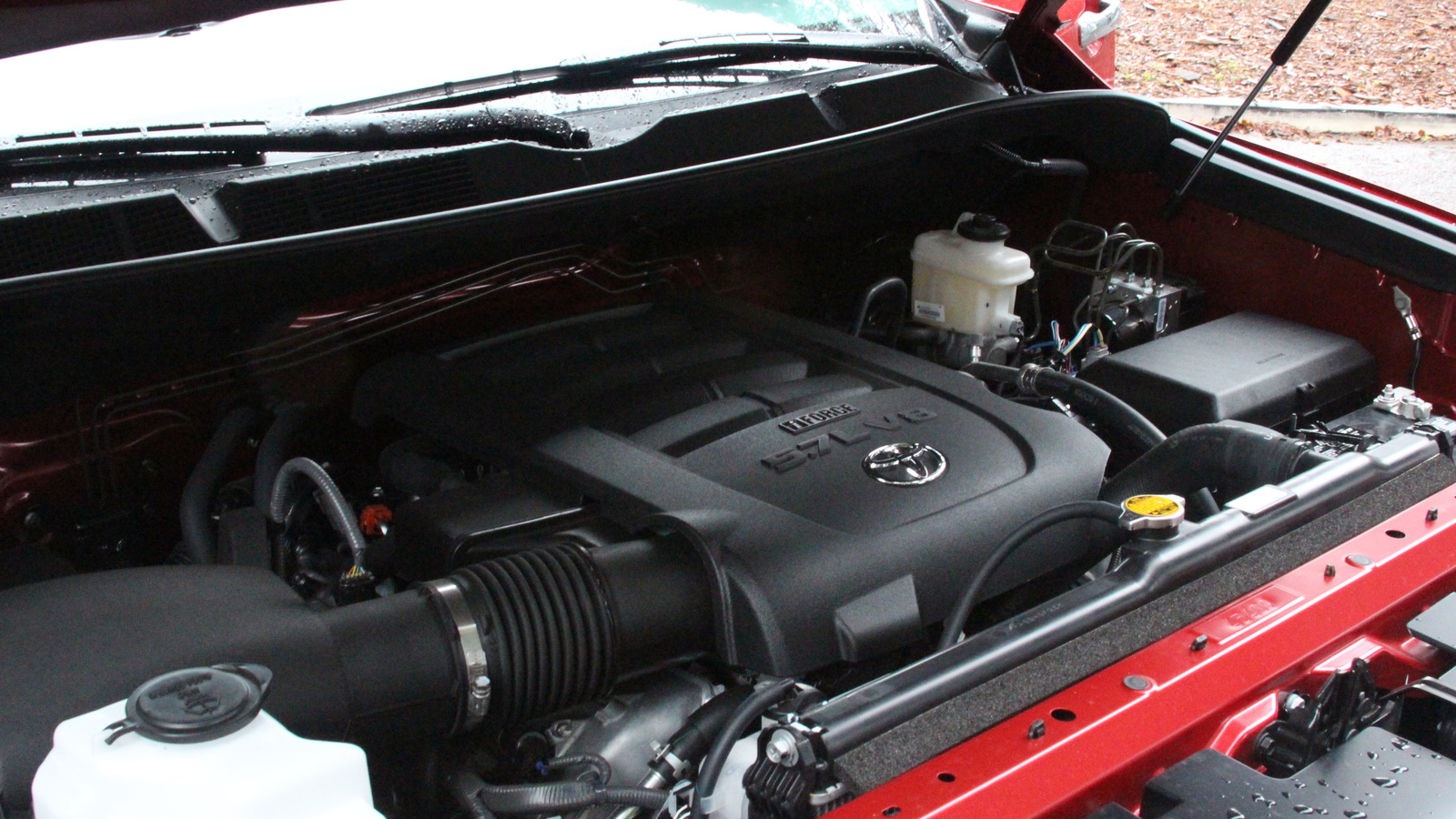 No one can claim the Tundra isn’t capable. With a 381-hp 5.7-liter V8 delivering 401 lb-ft of torque and a 10,500-pound towing capacity, it stands nearly level with the competition and is likely able to handle any project you toss at it. The engine is grunty and stout, and its 6-speed automatic delivers power to all 4 wheels when you need it through an electronic transfer case. The problem is that the trade-off for all this is a shocking 13 mpg city/17 highway, with a 15-mpg combined rating. The F-150 with a similar setup will do 15/21. A Silverado? 16/22. Even worse, you can go with an EcoBoost V6 from Ford and get a 12,000-pound towing capacity with a 19/23 mpg rating.

On top of that, all its competitors offer a better ride than the Tundra. With a traditional leaf-spring and live-axle suspension setup, the Tundra rides just like full-size trucks used to. Advances like an aluminum body for the F-150 and coil-spring suspension for the Ram have changed things of late, really highlighting just how old tech like the Tundra’s is. Still, if you’re not concerned with fuel economy and don’t mind your truck riding like a truck, the Tundra shouldn’t disappoint. 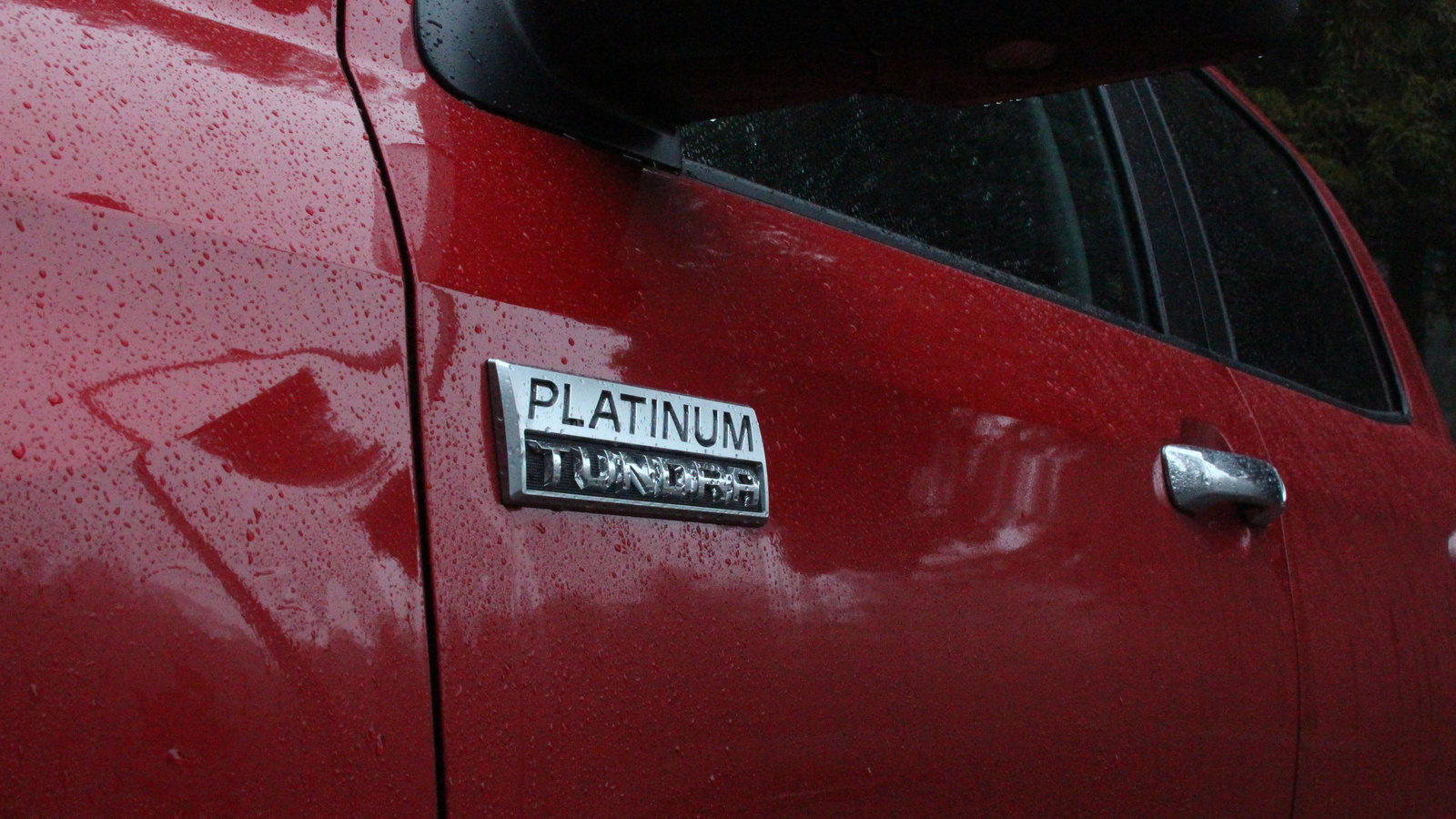 Refinement gripes aside, the Tundra is severely capable. While the 5.5-foot bed in my CrewMax limited usability somewhat, the Tundra’s ability to drive over or through things wasn’t hampered in any way. And with a new standard integrated brake controller, the ability to safely pull just about anything has increased this year as well.

On top of that, you’ll look good doing it. The Tundra has followed the mecha-inspired styling of the Chevy and Ford offerings, and that’s not a bad decision at all. In Platinum trim you get quilted leather inside for both trim and on the heated and ventilated front seats. A JBL sound system joins the upgraded Entune infotainment system, which now offers real-time traffic and weather, and daytime running lights are LEDs. Perhaps my favorite addition here is the power moonroof, although I wish it opened a bit wider.

Thankfully, the Platinum trim also comes with a blind-spot monitor, rear cross-traffic alert, and parking-assist sonar, because the Tundra is very hard to see out of. Seeing past the front corners is a symbolic effort at best, and parking-lot maneuvers and city driving require unique perception skills I have yet to develop. But steering effort is modulated well, and the Tundra avoids feeling ponderous, even in tight traffic and cramped car parks.

And stiff suspension aside, the Tundra is very comfortable whether you’re in the front seat or the back. The CrewMax offers more room than the front seat of most passenger vehicles on the market today, even for my long-legged frame, with a full recline and seats that are all-day comfortable. 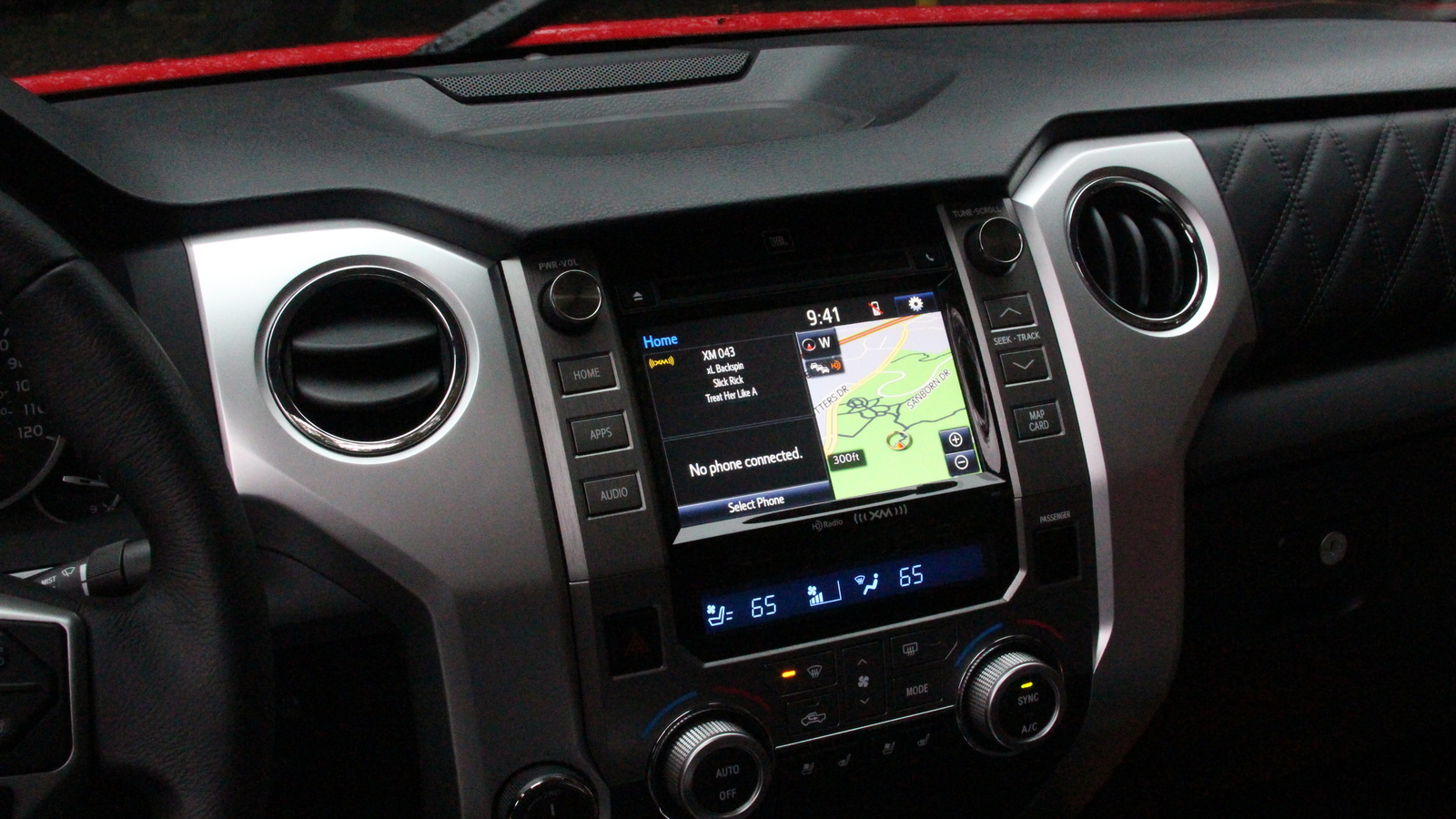 With the upgraded Entune infotainment system, real-time traffic and weather are now available in the Tundra. I’ve had some issues with the Entune system’s search features of late, with the system directing me to establishments that simply do not and never did exist in the locations to which I was directed, but otherwise the system is simple and intuitive in the best of ways. With a 7-inch screen, things are easy to see, and with the previously mentioned safety and visibility systems included with the Platinum trim, there’s little you’ll find yourself wanting in the Tundra. There’s even a driver memory system here, which would be a great combo with keyless entry and ignition were Toyota to include it in the $50K+ price tag.

Standard tech features for the Tundra include heated mirrors and wipers, USB ports, and an auxiliary jack. The SR5 trim adds fog lights, HD and satellite radio, a tilt-and-telescoping steering wheel, and an auto-dimming rear-view mirror, while the Limited adds automatic headlights and dual-zone climate controls, a power-sliding rear window, and the navigation system. 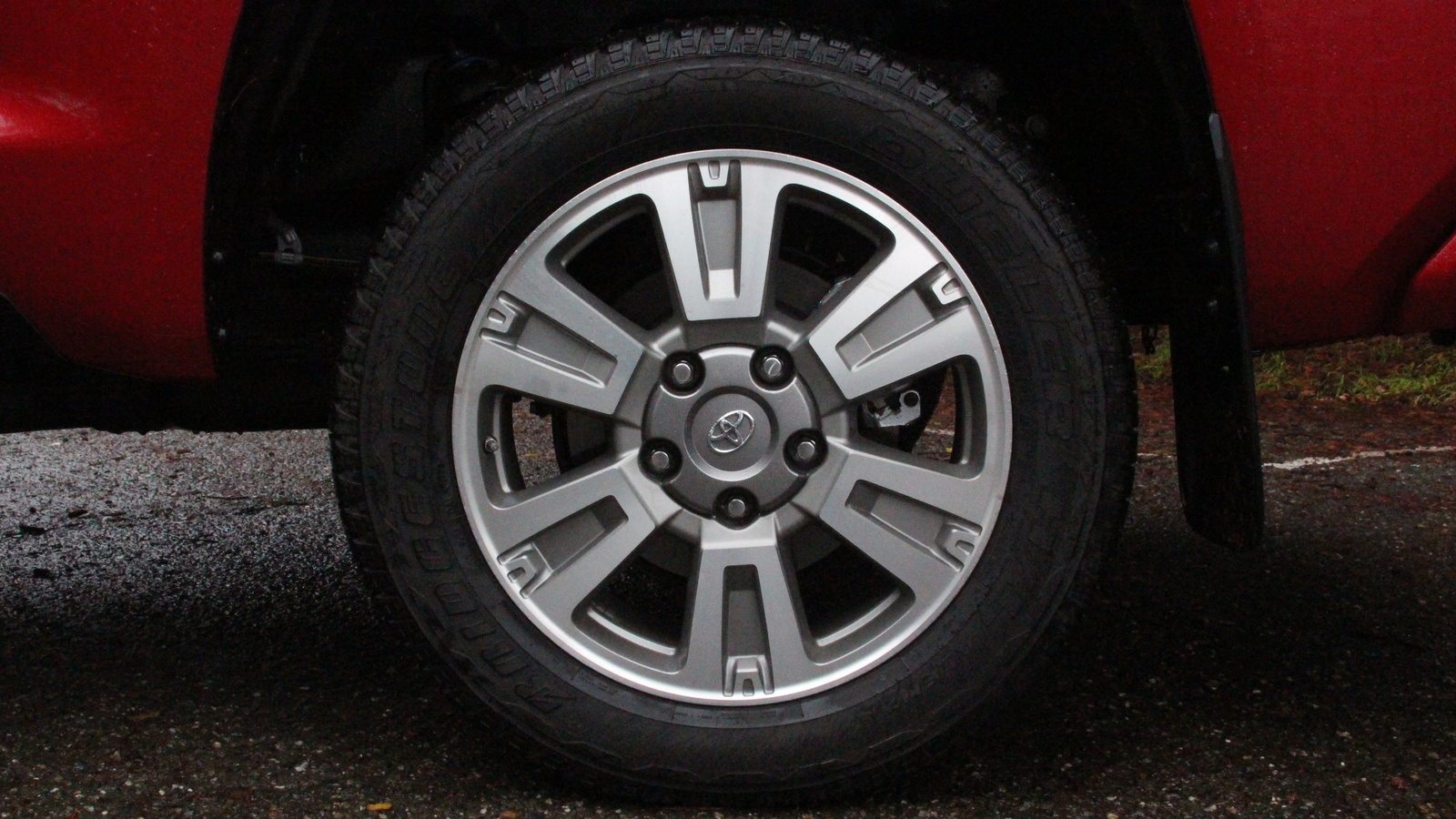 The National Highway Traffic Safety Administration has awarded the Tundra an overall 4-star rating, but the CrewMax specifically rated only 3 stars in frontal impacts and rollovers. The Insurance Institute for Highway Safety awarded its highest rating of Good in all tested segments, although several were left out of testing at this point.

Eight total airbags cover the interior of the Tundra, including full-length side airbags. Standard safety features like traction and stability control are joined by trailer brake and sway control, and the rear camera, front and rear parking sonar, and blind-spot monitor with cross-traffic alert are available as options.

With all the advances made by the competition, it’s really hard to recommend the Tundra. Certainly there are owners who can easily ignore its poor fuel economy and stiff ride, but when there are options that don’t require such sacrifices, why punish yourself? The path of progress moves ever forward, and the Tundra just hasn’t been able to keep up. For less money, you can get more truck, and that’s an easy decision to make.

That said, the Tundra was awarded a Best Resale Value Award from Kelley Blue Book, and that's a hell of a big push in the direction of cost effectiveness. And with a standard V8, the higher base price is justified versus the competition. And if you care about keeping your truck looking fresh and new, the Tundra offers a 3-piece bumper design that's less costly to replace than competitive offerings. That's a big deal in a work truck.

scourge9999 Difference with Toyota compared to Ford or Nissan or any of the other competitors, is you can drive it for 200k+ miles with very few fixes required. Rams become a money pit. All the trim on F-150's falls apart. Titan's rattle themselves apart. So you can buy two of the other guys or just buy a Tundra once.

Users ranked 2016 Toyota Tundra against other cars which they drove/owned. Each ranking was based on 9 categories. Here is the summary of top rankings.

Have you driven a 2016 Toyota Tundra?
Rank This Car

What If I Still Owe Money On A Car Loan.

I want to sell my truck but I still owe some money on a loan how does that work?

Car Fax Are Clean - But Car Gurus Says There Is Frame

Drove truck to church, set for an hour and a half turn the key and the engine tried to crank for about 20 sec. Turn key to off position then to the on position until radio cycled on then to the star...

69 views with 1 answer (last answer about a year ago)

WHAT DOES FFV MEAN IN THE VEHICLE DESCRIPTION