Midsize hybrid SUVs don't come much better equipped or priced than the Toyota Highlander Hybrid, which has been out for three generations. 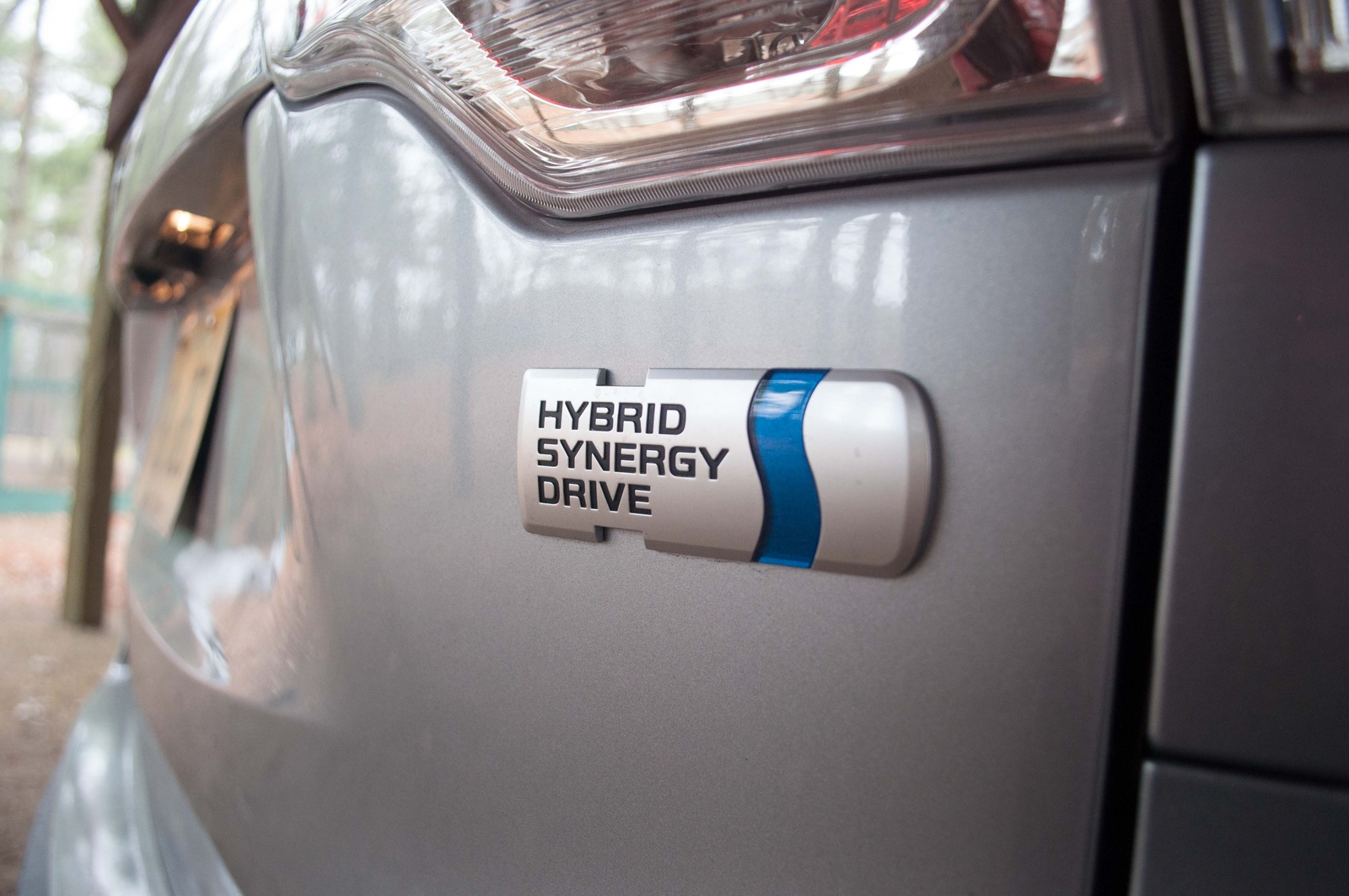 Toyota started building hybrid SUVs before anyone else bothered to try. That the Highlander Hybrid has survived 11 years with the most meager of sales—typically, it’s less than 3 percent of all Highlander models sold—is evidence that Toyota’s hybrid powertrain is both profitable and highly versatile. Is a semi-luxury SUV sometimes powered by electricity worth all your budget? We’ll say this: The Highlander Hybrid packs a lot more surprises than just fuel economy. 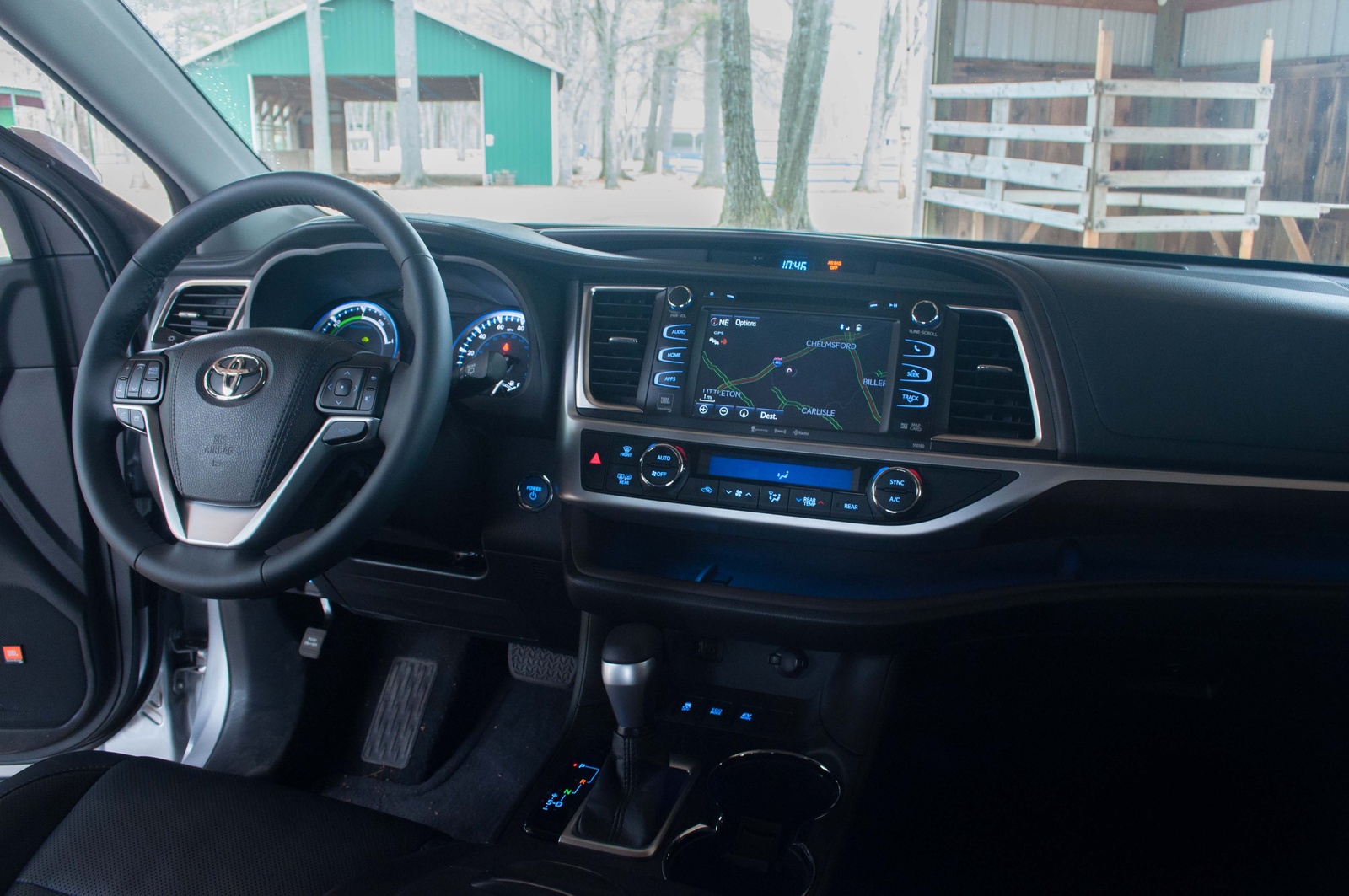 Spotting a Highlander Hybrid is tough. The only visual differences are large “HYBRID” badges on the front wheel flanks, a “Hybrid Synergy Drive” badge on the tailgate, and a blue-tinted Toyota badge on the grille. Otherwise, driving a silver Highlander like ours is the most inoffensive statement you could possibly make. Aside from the large inverted trapezoid grille and LED running lamps, the Highlander looks as stiff and dull as a four-term Congressman. A mild chrome finish on the 19-inch wheels is as loud as this car gets. Toyota has addressed our exterior gripes with the 2017 model, which brings a sportier SE trim and a more aggressive nose that adds some needed spice. That car won’t be available until the fall.

But the interior is a getaway vacation. Our Limited Platinum’s perforated leather seats were buttery smooth, and the same goes for the thick steering wheel. Ambient blue lighting spreads across all four doors, footwells, and the two-tone shelf space spanning the dash. The stitched dash is soft save for the lower recesses, and what isn’t leather and aluminum is certainly convincing enough. Brown stitching dresses up all three rows of seats. Panel gaps are tight, and the plastics aren’t too grainy. This car feels upscale like few other Toyota models.

Versus the regular car, Toyota swaps the tachometer for an energy gauge that shows how hard you’re pushing the gas pedal and when the battery's getting recharged while coasting and braking. An additional energy diagram in the instrument cluster shows the battery’s state of charge and when the engine and battery are working independently or together. A little green EV icon within the energy gauge lights up when the battery is providing all power or when the driver presses the EV Mode button (details below) on the center console. 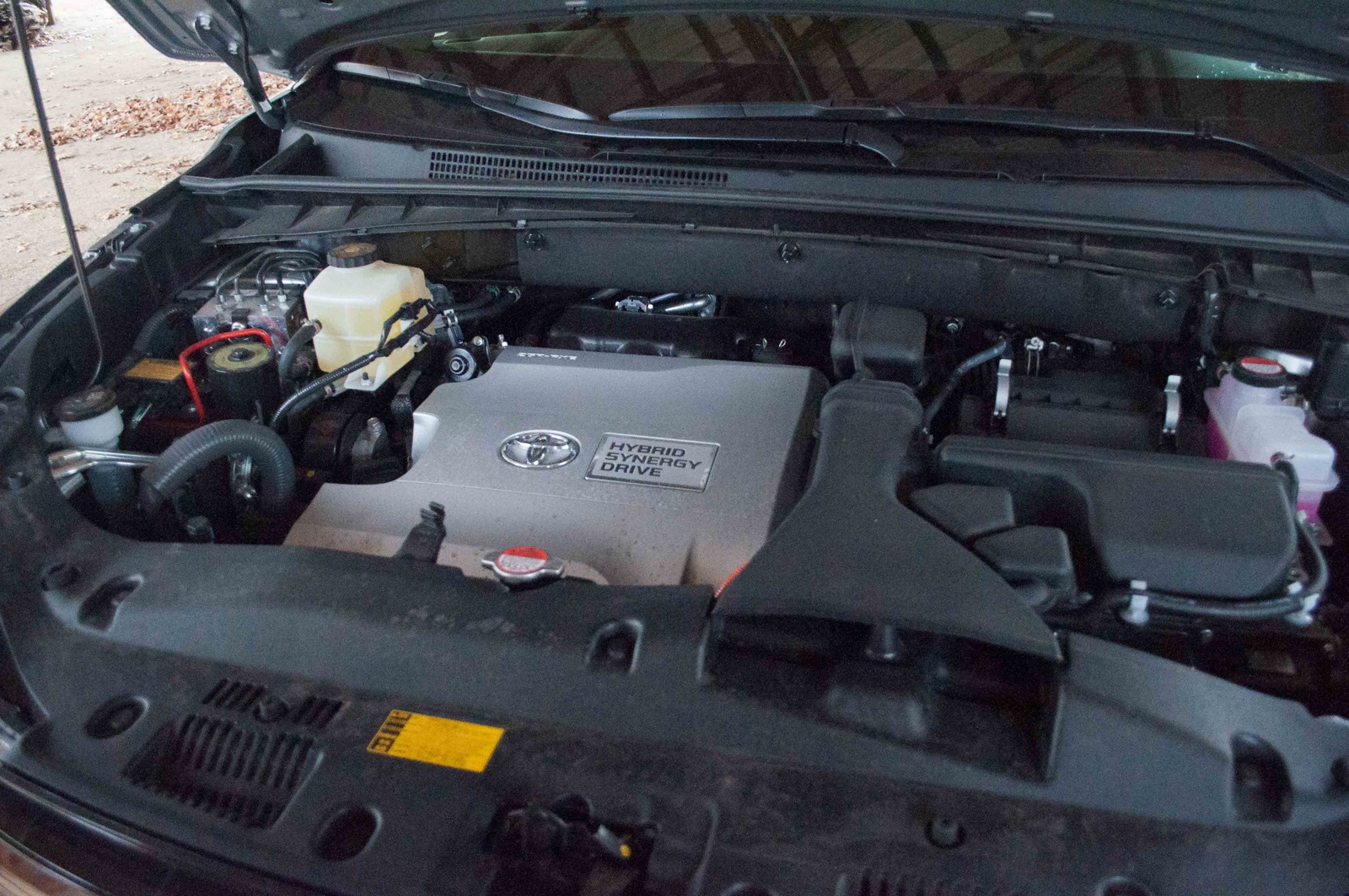 Since we rate the regular Highlander separately, there’s no reason to dock this car for its obvious fuel-saving drawbacks. Driven as this model is intended, the Highlander Hybrid delivers a seamless, utterly relaxing experience that’s 90 percent worthy of a Lexus RX. The regular model’s 3.5-liter V6 is detuned in favor of a fuel-efficient Atkinson combustion cycle, which drops horsepower from 270 to 231. But when combined with two electric motors, including one at the rear axle that qualifies the vehicle for all-wheel drive, the Hybrid delivers 280 combined horsepower that’s sufficient despite the extra weight of the nickel-metal hydride battery and electric motors. Toyota’s hybrid expertise is always evident. There is never a shudder when the big V6 shuts down or restarts, and it happens so transparently you’d never know what was running were it not for that energy diagram on the instrument cluster.

The seats are plush and supportive, the ride comfort is serene but not floaty, wind and road noise are just faint hums at highway speed, and the steering is fingertip light on effort. There are no gear changes, since the continuously variable transmission is made up of belts and pulleys. The brakes transition from regenerative (using the electric motor friction to slow the car down) to conventional (disc rotors) just as easily, and the pedal gets a little mushy only at the very end of travel. Harshness and vibration are not welcome here, and they show up rarely.

But hybrid powertrains always bring compromise. The same CVT that allows silky torque transfer causes the engine to emit a high, sustained groan under heavy acceleration. The steering is loose and entirely numb to the road surface. You won’t know, for example, how much load is really on those front tires. Save for the steering, the regular Highlander alleviates all those concerns. But this sacrifice awards the driver an EPA-rated 28 mpg in the city and 27 on the highway. Over 400 miles, mostly on highways, we averaged close to 27 mpg. Compare that to the regular Highlander AWD’s 18/24 rating. If your commute involves a lot of stop and go, you’ll pocket significant savings once you’ve paid off the hybrid’s $3,000 premium.

Weirdly, the Hybrid won’t crank the engine until several seconds after you’ve started the car, which confuses first-time drivers who wouldn’t think to look for the small “Ready” light on the instrument cluster. For optimum emissions, the engine and the catalyst must reach operating temperature as soon as possible, and since this is not an electric vehicle, why not start it immediately?

One other thing: The EV Mode switch is supposed to lock the car on battery power, but it’s a silly ploy. It won’t work above 25 mph and will usually cancel out when pressed, since the car always meters the precise level of power required. Unlike a plug-in hybrid, the Highlander Hybrid has no feasible electric-only range and can run on the battery alone only at higher speeds when coasting or applying the throttle downhill. Avoid it and let the car decide. 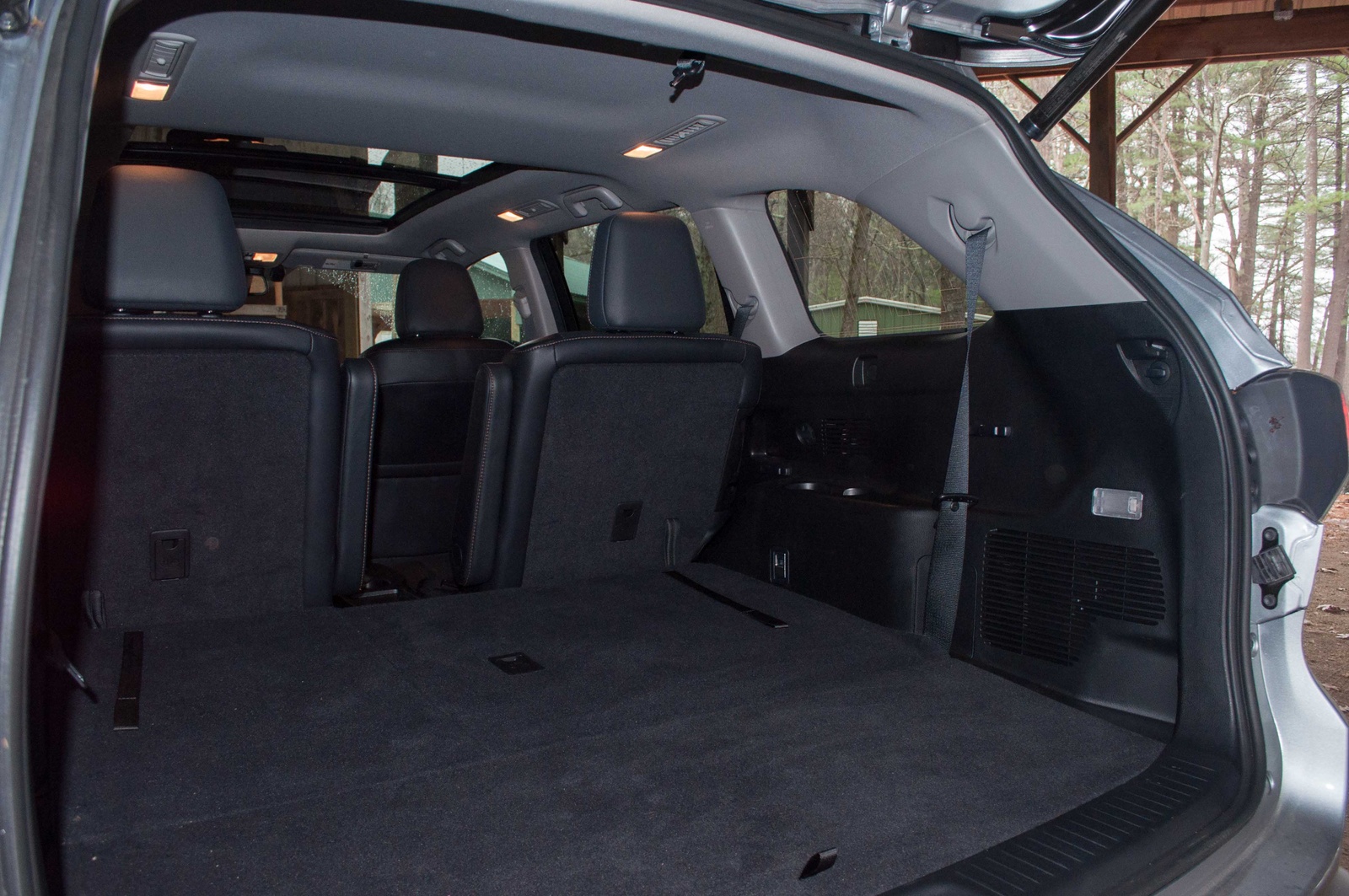 It doesn’t get much better for backseat passengers than a Highlander. Hybrid trims feature second-row captain’s chairs that replace the three-row bench in lesser models. Take a seat, adjust the rear climate controls, switch on the optional heating, pull up one of the side window shades, recline, and pass out. There is room galore in the second row, and a central table between the seats (with cupholders) folds down to allow the middle third-row child some extra legroom. Moving the second-row seats couldn’t be easier, with three levers all marked in clear, white graphics; sliding requires one pull, while folding requires two. Our car’s panoramic moonroof heightened the tour-bus atmosphere.

Up front, that dash shelf has a slot to route phone-cable wires from the USB port (which is buried in a dark recess below). The cupholders are so American. Smaller drinks may fall out, so go large. Ditto for the deep center cubby, which could stash about a hundred candy bars. Gauges and buttons are large and clear. But reaching the outer edges of the 8-inch touchscreen, plus the radio seek buttons and tuning knob, requires a fully stretched arm even for average-height drivers. The screen also washes out in sunlight. Thankfully, it’s speedy and intuitive. Toyota also uses many controls, like those for the auto high beams and climate control, that are hard buttons instead of requiring you to search through menus upon menus. The tailgate glass window opens separately, a nice touch when you just need to reach inside or your pooch wants some more air. 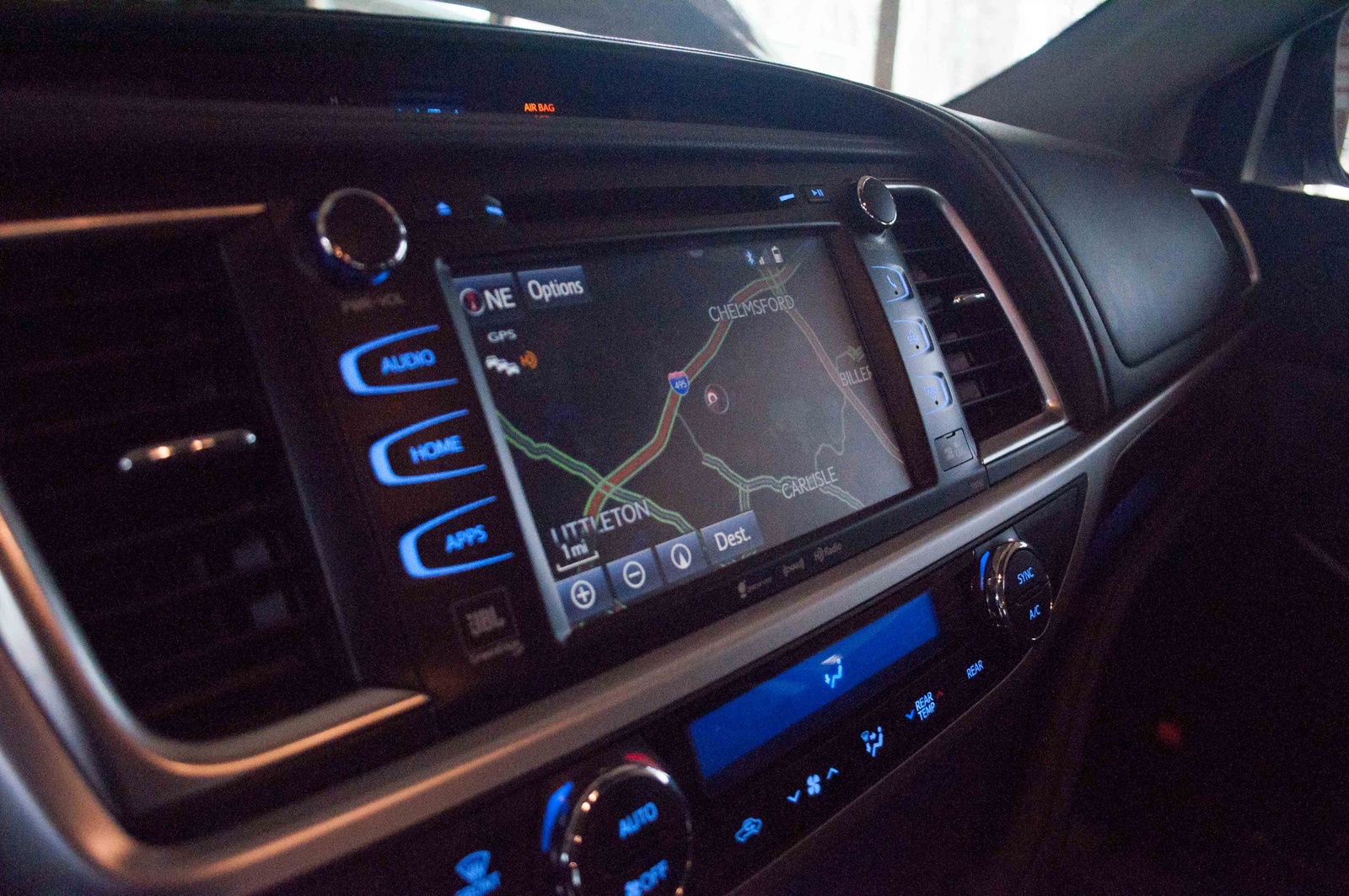 The Limited trim comes with almost everything. The navigation maps are a bit crude in detail but offer live traffic and rerouting should a faster route become available, plus the single-string address entry—and indeed, all voice functions—is surprisingly accurate and quick to respond. The touch-capacitive buttons on the sides of the screen are easy to use, too. The JBL GreenEdge stereo is supposed to reduce electrical draw. That may be so, but its 12 speakers can’t deliver anything but mediocre, flat sound whether streaming through Bluetooth, HD Radio, or USB. The infotainment system, called Entune, can be customized to show multiple screens at once for audio, navigation, contacts, or a variety of functions. With a Toyota app on a connected smartphone, you can access Yelp, Bing search, OpenTable, and other apps from the main screen, but they really should be installed on the car’s hard drive (like the weather app). The heated steering wheel, like those in Lexus models, heats only the 9 and 3 portions of the rim.

That’s part of the Platinum trim, which includes the Driver Technology Package (auto high beams, forward-collision alert with auto-braking, adaptive cruise control, lane-departure warning). A rear multimedia system isn’t offered. A 120-volt household socket, three 12-volt outlets, and one USB port are onboard. We’d have expected LED headlights since the Prius offers them, but the Highlander makes do with projector-beam halogens that are just average. 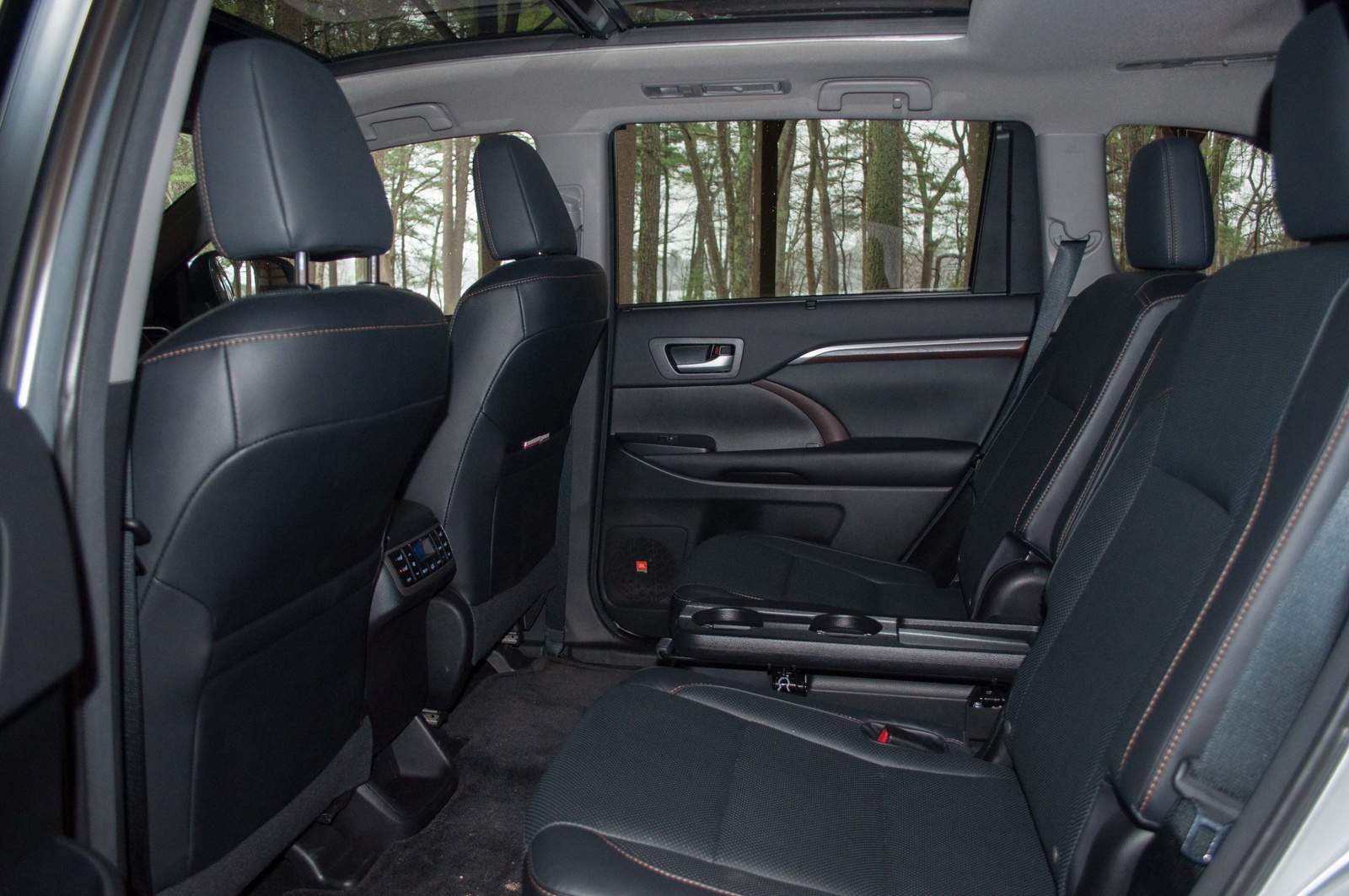 The Highlander Hybrid has the highest 5-star rating from the National Highway Traffic Safety Administration and is a Top Safety Pick+ from the Insurance Institute for Highway Safety. The latter award indicates a top rating in all five crash tests plus a minimum passing score for its forward-collision alert with auto-braking system. Only the highest Platinum trim receives the Driver Technology Package, but that will change for 2017 when all Highlander models get it as standard (and with added pedestrian detection). The Hybrid also comes with blind-spot monitoring and a backup camera standard. 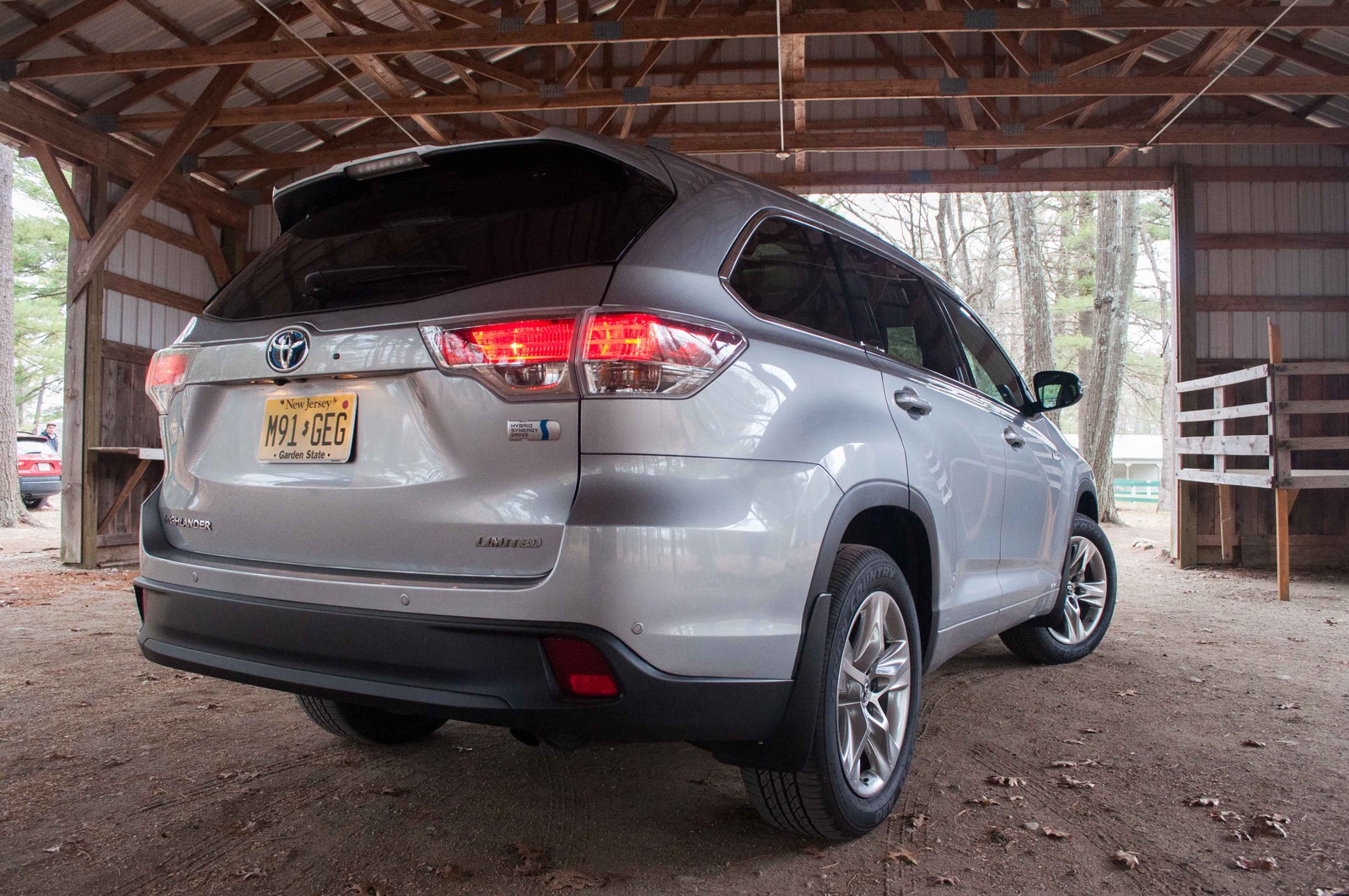 Our $51,385 test car cost as much as anyone can spend on a new Highlander, hybrid or not. You won’t get into a 2016 Highlander Hybrid for less than $48,770, and that’s without the heated second-row seats, heated steering wheel, panoramic moonroof, rain-sensing wipers, and driver-assist features. For 2017, the Hybrid will be available in base LE and midrange XLE trims for substantial savings. But as it stands, there’s no shame in loading up this car to near-luxury levels. It’s a larger car than the Lexus RX and drives with a similarly exacting polish and refinement that aren’t evident outside its roomy, comfy cabin. Any other hybrid SUV this size costs way, way more (BMW X5 xDrive40e, Volvo XC90 T8), so it’s not even a contest if you’re in this market. Whether the hybrid itself is worth the premium over a loaded gas-only model is entirely up to your driving habits. For a few thousand American dollars a year, that answer would be yes.

What's your take on the 2016 Toyota Highlander Hybrid?

Have you driven a 2016 Toyota Highlander Hybrid?
Rank This Car

How Do I Remove The Battery Cover?

it seems the aux battery is dead on 2016 Highlander Hybrid. I know where the battery is (rear driver side, under the floor panel). How do I get the cover off so I can get to the battery itself? There ...

How Do I Turn Off The AWD On My 2016 Toyota Highlander Hybrid Platinum Limi...

How do I turn off the AWD? My Highlander handles terribly in any kind of slippery situation.

Can I Get Accident Toyota Highlander 2016 Model