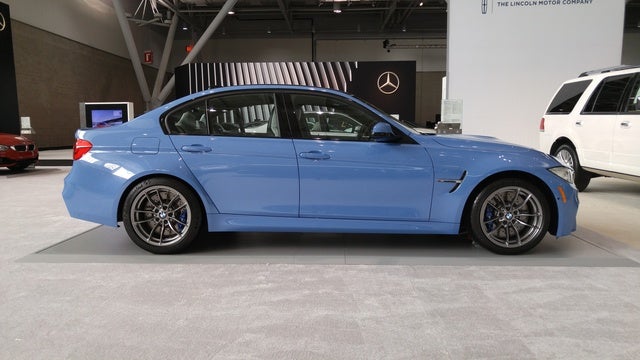 BMW's performance-oriented version of its popular 3 Series rolls into 2016 with only minimal changes. The M3, which has a history stretching back to the mid-'80s, made a reputation for itself on the motor sports circuit in its early days and continues to provide thrill-seeking drivers with a viable alternative to such competitors as the Porsche 911, Chevy Corvette, Audi S4, Ford Mustang, the new twin-turbo V6-equipped Cadillac ATS-V, and Mercedes-Benz's C63 AMG. While some claim the S4 has the best interior of the bunch or that the C63 makes a quicker sprint to 60 mph, many feel the M3 tops them all when it comes to a combination of daily drivability with top-level power and performance.

When BMW debuted the fifth-generation version of the M3 in 2015, the automaker did away with the previous generation's V8 engine and replaced it with a high-revving 3.0-liter twin-turbocharged inline 6-cylinder that continues to provide the M3's power for 2016. The turbo 6 cranks out a generous 425 hp and 406 lb-ft of torque, available at an rpm as low as 1,850, and drives the M3 from 0-60 in about 3.9 seconds with an optional 7-speed M dual-clutch automatic, or in 4.1 seconds with the 6-speed M manual. The M3 manages fuel economy numbers of 17 mpg city/26 highway with the manual shifter and 17/24 with the automatic.

Additional changes to the new-generation M3 include a weight reduction of about 180 pounds, courtesy of such features as an aluminum hood, a carbon fiber roof, and a carbon fiber driveshaft. BMW also switched out the M3's hydraulic power steering for 3-mode M Servotronic electromechanical steering, which provides a more precise feel, and upgraded its suspension with a new 5-link rear configuration, mounted directly to the body and providing a stiffer ride with less body roll in corners. Although the updated suspension delivers better maneuverability and handling than its predecessor, some reviewers say it also results in harsher road feel, especially at higher speeds.

With the new generation, BMW split the 4-door sedan and 2-door coupe M3 body styles into two separate categories, each with its own nomenclature, keeping with the German automaker's current naming system. The sedan maintains the M3 designation, while the M3 coupe has been redubbed the M4. The coupe receives slightly different styling but retains all the M3's features under its skin. Both continue to ride on a rear-wheel-drive platform.

The 2016 M3 receives only minimal updates for the second year of its new generation, designed to jazz up its appearance a little and hold off the competition as much as possible. Redesigned LED L-shaped taillights help conserve electrical power and reduce weight, and Smoked Topaz metallic and Champagne Quartz metallic are newly available as exterior colors. The M3 interior gets some additional chrome trim around the air vents, climate controls, and window switches, and BMW updates the optional next-generation navigation system with faster calculations and more realistic 3D mapping, plus LTE technology for better Bluetooth, USB, and smartphone integration.

Inside, the M3 comes equipped with a number of M features befitting its designation, including an M leather-wrapped steering wheel and shell-shaped M front seats with enhanced body support. Buyers can add two-tone leather seats with contrast stitching or a leather dash and doors as options. The rear seat offers more room than most of its competitors, the trunk has a cargo capacity of 12 cubic feet, and the rear seatback splits 60/40 and folds for additional cargo-carrying capacity.

All the interior and exterior features are great, but the M3's driving dynamics remain its hallmark, starting with its muscular and ear-pleasing engine note and continuing with its well-reviewed electronic Dynamic Stability Control system with Normal and Dynamic modes. Reviewers suggest keeping the system in Normal mode around town and during everyday driving, because the Dynamic mode kicks the M3 up to a level that might make a quick trip to the grocery store a bit like trying to rein in a racing wild stallion. Buyers who prefer that high level of performance might want to add the optional and powerful M carbon-ceramic brakes, which could be required to stop the M3 when it's fully wound up--not that that's a bad thing. It's what makes the M3 a car that hovers near the top of its class and continues to deliver an exhilarating driving experience.

The BMW M3 Sedan Comes Standard With A Manual Transmission? Is This A True ...