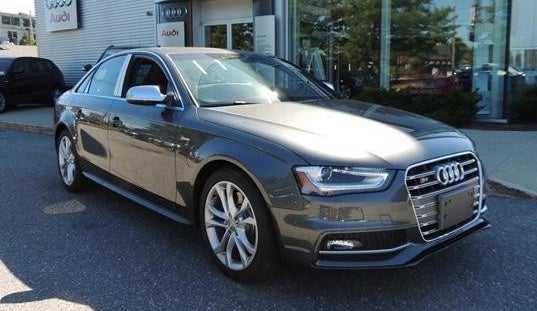 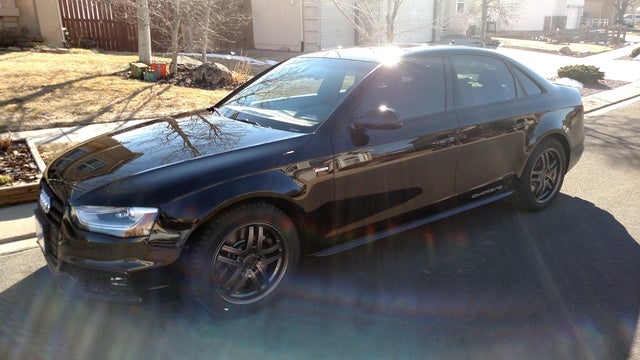 For a while earlier in the year, it was looking like a brand-new Audi S4 would come out for 2016, but we now know we'll have to wait until the 2017 model year for the new turbocharged S4 that recently debuted at the Frankfurt Auto Show. That, however, makes 2016’s S4 the last of the line for the B8 fifth generation that has been on sale since 2009. As a carryover model, you can’t expect many new goodies or options; but new-for-2016 bits are extant and notable. These include a three-spoke multifunction steering wheel for cars equipped with the Premium Plus package, the addition of Bang & Olufsen sound to cars equipped with the Technology and Premium Plus packages, new 19-inch five V-spoke wheels, and available Misano Red pearl effect paint.

Still based on the outgoing A4, the S4 starts at $50,200 for the Premium Plus (actually the base model), while the Prestige model starts at $56,100 and adds voice recognition controls, a rear-view camera, adaptive headlights, and blind spot detection. The regular A4 starts at $34,900, and the step up to the S4 seems like a big price hike for a car that doesn’t look much different from the A4 other than the LED taillights and a few subtle tweaks in the styling that make it look more aggressive. With the S4, though, what you're really paying for its what's under the hood.

Audi’s proven Eaton-supercharged 3.0-liter V-6 is at the heart of the S4, and it’s a motor that delivers solid low-end torque and makes the kind of deep, gutteral sound that you’d expect from a sleek German sedan like this one. It produces 333 hp and 325 lb-ft of torque, allowing the car to do 0-60 mph in just under five seconds, a second and a half faster than the A4. As usual, top speed is limited to 155 mph.

The most popular transmission choice is the 7-speed dual clutch “S-Tronic” automatic that is quite highly regarded (but, interestingly enough, won’t be available in the 2017 car). A proper 6-speed manual is also available. Fuel economy (premium gasoline is required) is 17 mpg city/26 highway for cars equipped with a manual and 18 mpg city/28 highway for S-Tronic cars. That’s pretty impressive when you consider that this is a supercharged luxury car weighing in just shy of two tons--although the BMW M3 puts up roughly the same numbers.

The 2016 Audi S4 comes standard with sports suspension and electronic speed-sensitive rack and pinion steering, while optional handling equipment includes adaptive dampening and a sport differential that vectors power from side to side. This enhances the already capable all-wheel drive system, and, in addition to the better handling, makes the S4 an even more usable car in all kinds of weather conditions.

The interior is largely the same affair as last year’s model, and it’s got all the stuff you’d want or need out of a modern luxury car, including an auxiliary jack, SD card slot for MP3s, speed-dependent volume control, optional navigation, and optional Audi Connect, which offers wi-fi for up to eight different devices and features Google Earth mapping.

Some newer rival designs have surpassed the A4/S4 in safety tests, but the Audi is still a perfectly safe car overall. The National Highway Traffic Safety Administration (NHTSA) gave the latest A4 five stars, while the Insurance Institute for Highway Safety (IIHS) gave it solid scores on everything but the small overlap frontal test. Available safety enhancements on the 2016 S4 include blind-spot and lane-departure warnings, adaptive cruise control, and rear thorax airbags.

While it may seem a bit dated in certain areas (like the interior) when compared to newer designs from its German rivals, the 2016 Audi S4 is still a contender and still perfectly competent in both the luxury and performance departments. This car has proven popular both with businessmen who want a blend of comfort and sportiness and with more performance-oriented drivers who have taken advantage of Audi’s characteristically tunable motors. This will also be the last of the supercharged S4s, as they will move to turbocharging for the next model, and it’ll be last one available with a manual gearbox as well. The 2017 car won’t look all that different from, or be considerably faster than, the 2016 either, so these are all things to consider for those enticed by the combo of a blown engine and a 6-speed.

How can I actually create a search that *ONLY* returns audi cars with a 6-speed manual and a 3.0 six cylinder engine? Preferably a S4 or S5.