The engineers that worked on the third-generation Tundra must have spent time around American trucks or all rented a condo together near a farm in Texas. There seems to be a deeper understanding in this truck as to how people use it. 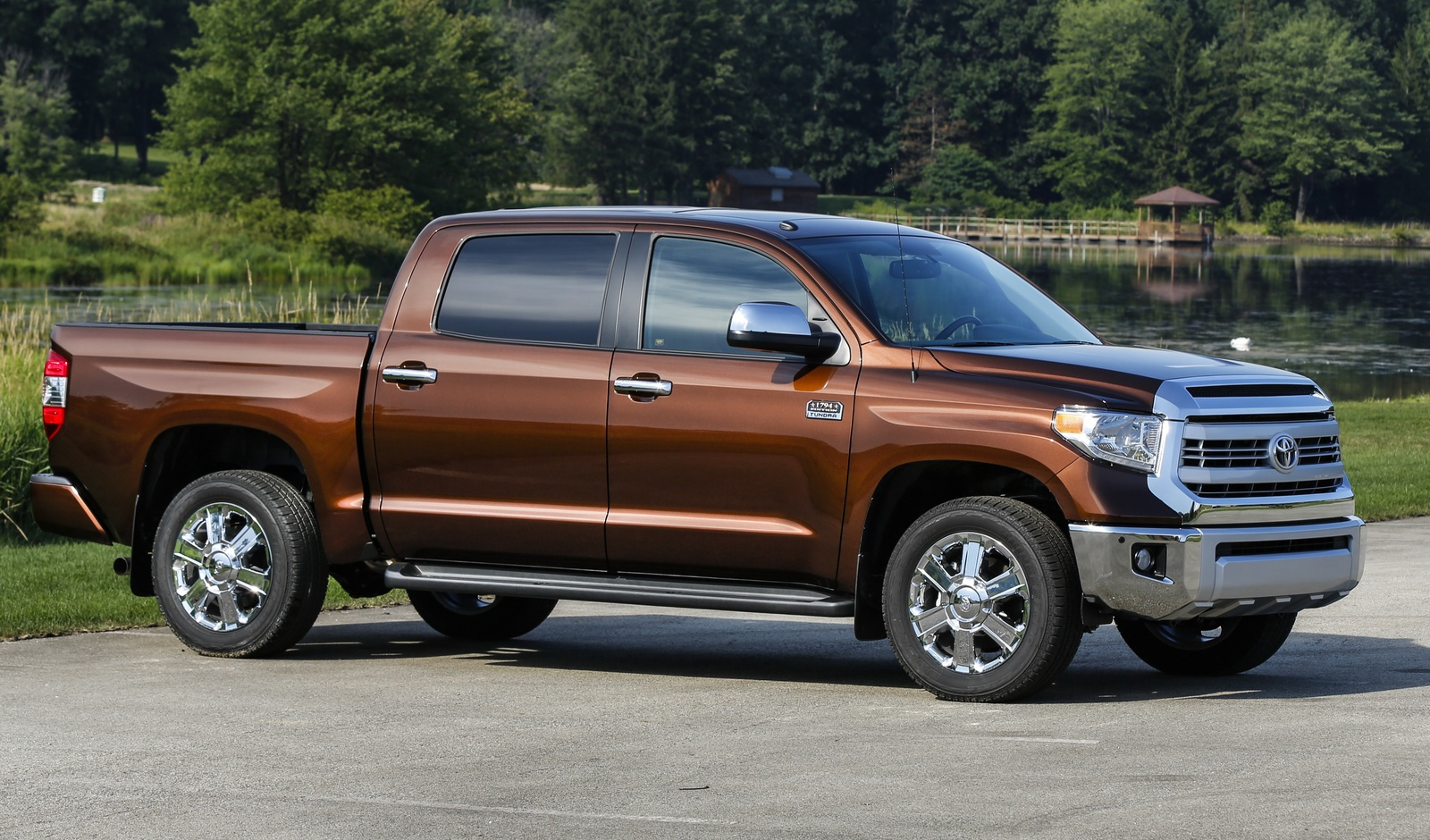 How does one "eat crow"? I’m not quite sure, but after spending a week with the Toyota Tundra, I must officially change my stance on Toyota’s full-size pickup and put it right up with the Big Three's American trucks. By some measures, the Tundra is a more “American” truck than those built by GM, Ram and Ford. It is the right blend of tough and high tech that makes it ready for weekend warriors but also capable on the work site.

I was not always convinced of the latter, as the Tundra always seemed to be a pretend “truck guy” truck. Yet with this most recent generation, I've noticed more and more Tundras pass by with contractor signage on the door. Did they know something this venerable auto writer did not? Apparently. Probably. Definitely. 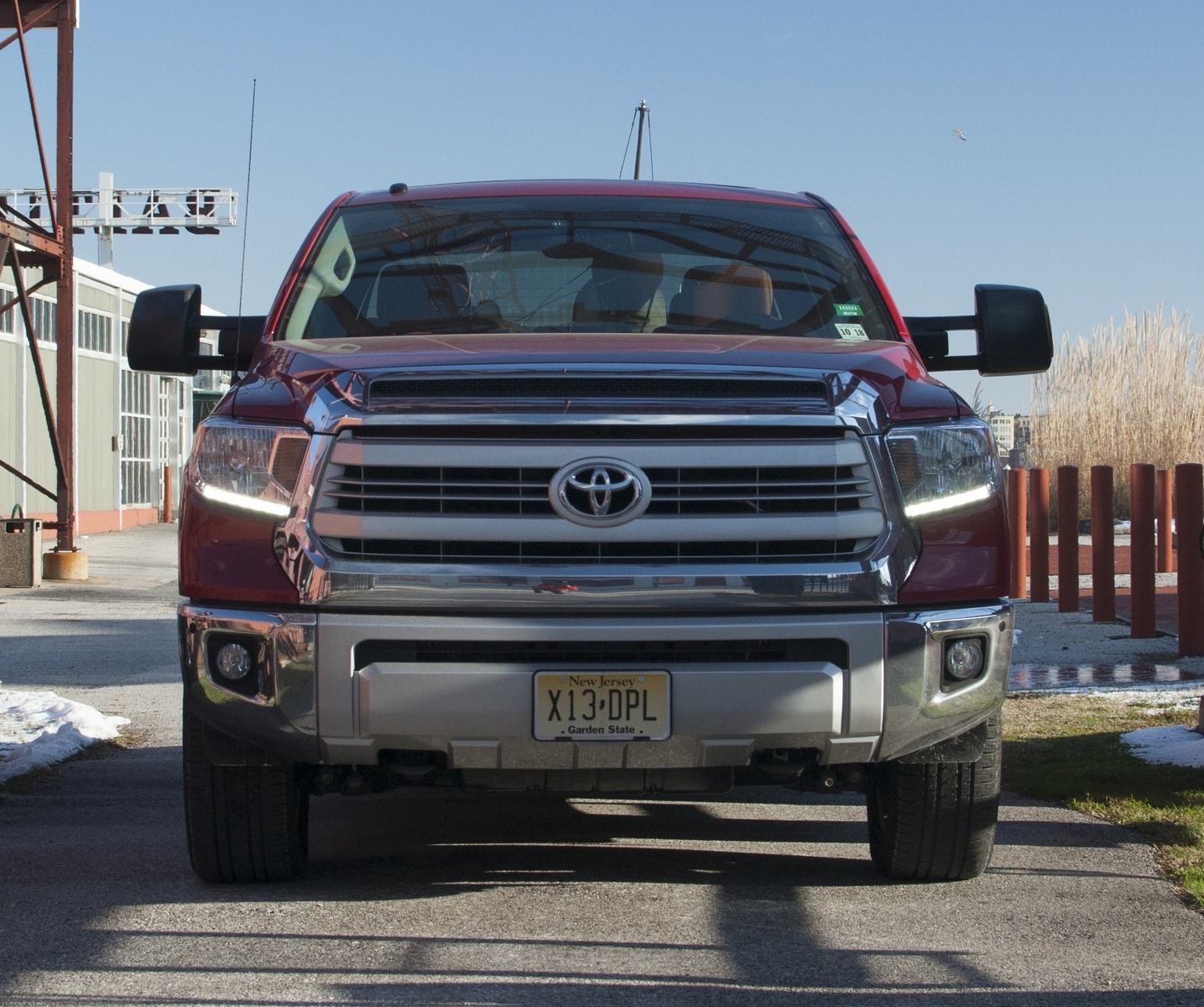 The going trend in the pickup world is Tonka-Truck styling. It has just been year after year of over-the-top machismo one-upmanship. The result is trucks that are oppressively large, making parking rather difficult. But it does not matter—pickup drivers want big. The Tundra delivers that level of size and bold styling, but in a way that's far more futuristic looking than the conservative Silverado or Citadel-like GMC Sierra. If you have the image of the first-generation Tundra in your head, the new vehicle will seem comically large. But in the context of the rest of the current truck market, it's about the same size as the competition.

Inside is a bit of a mixed bag. The knock on older Tundras was that they made you feel like you were in one of Toyota’s family sedans when behind the wheel. Perhaps Toyota designers were not ready for just how much Tonka-ness needed to go into their trucks. But that is an issue no more, as the interior is dominated by two large, silver pillars that frame the center console. There is plenty of blocky styling, including the very industrial futurist font for “Tundra.”

The Tundra's actual exterior presence changes based on which trim you select. The base SR is effectively the “work truck” option. It costs $26,200 and comes with a dark plastic grille and front bumper, as well as very basic steel wheels. The next trim up is the SR5. At $29,745 it adds chrome bumper endcaps and chrome grille accents, as well as fog lights, 18-inch 5-spoke wheels and a 7-inch touchscreen that controls Toyota’s Entune and satellite radio.

Our Platinum test model started at $44,550 and featured all the equipment from the Limited, but swapped out the chrome for a unique body-color bumper and grille surround. It also added LED daytime running lights, a power sunroof, unique leather stitched interior cladding and a JBL premium audio system. 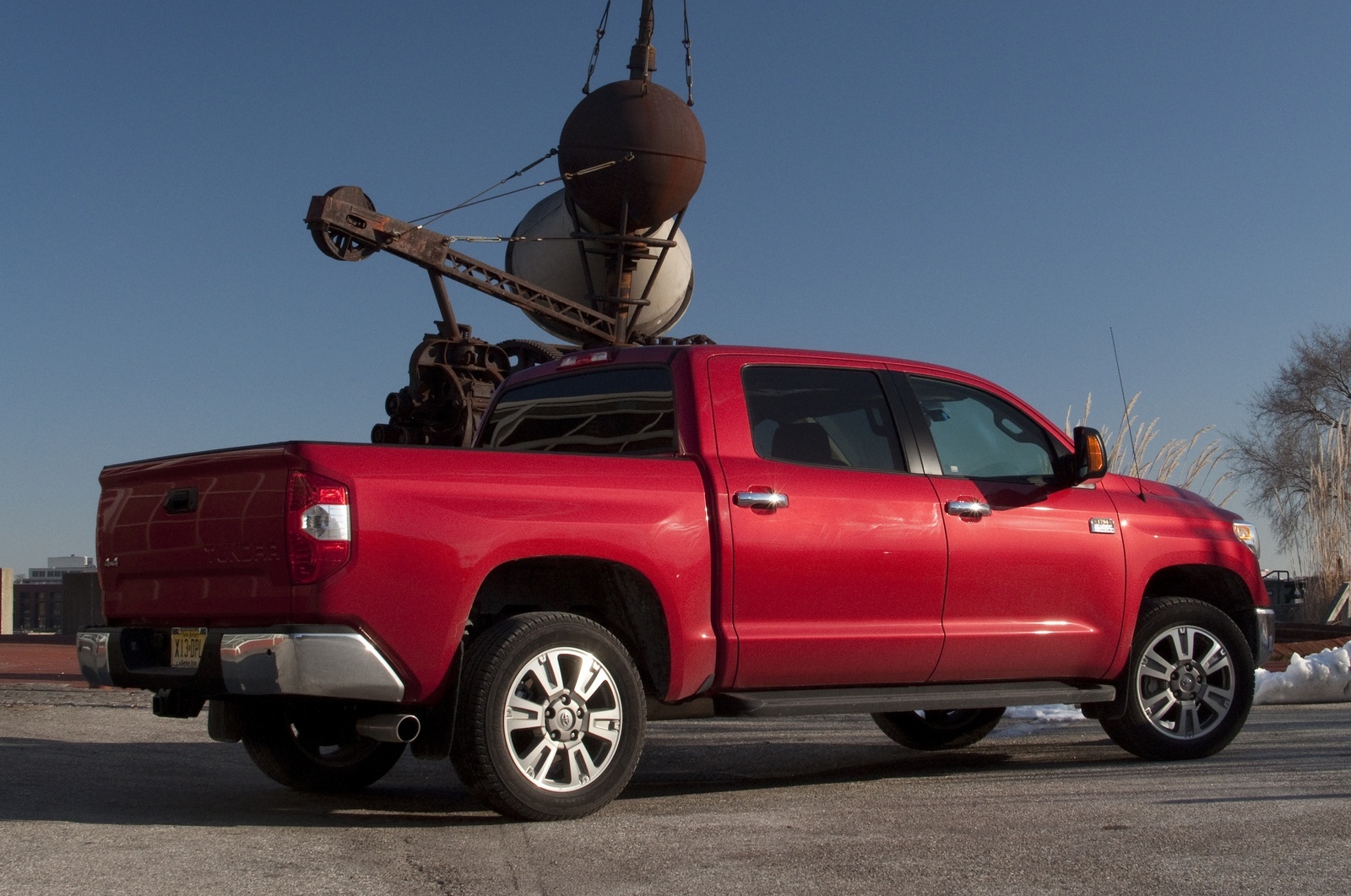 When equipped with the larger V8, the Tundra is a formidable beast. The powerful V8 lurches the vehicle forward, and power is put to the road well. There is a tendency for V8 pickups to peel out when accelerating from a stop if they do not have a load in the truck bed. The Tundra does not do this, and no power is lost in the form of a small burnout. This is a combination of an effective rear differential and rear suspension geometry.

Like an older American truck, the Tundra is thirsty. The big 5.7-liter V8 gets 13 miles per gallon city, 17 highway, and an estimated 15 mpg combined. We say estimated because in real-world driving, we got closer to 14 mpg. Yikes.

When properly equipped, the Tundra has a towing capacity of 10,500 pounds. 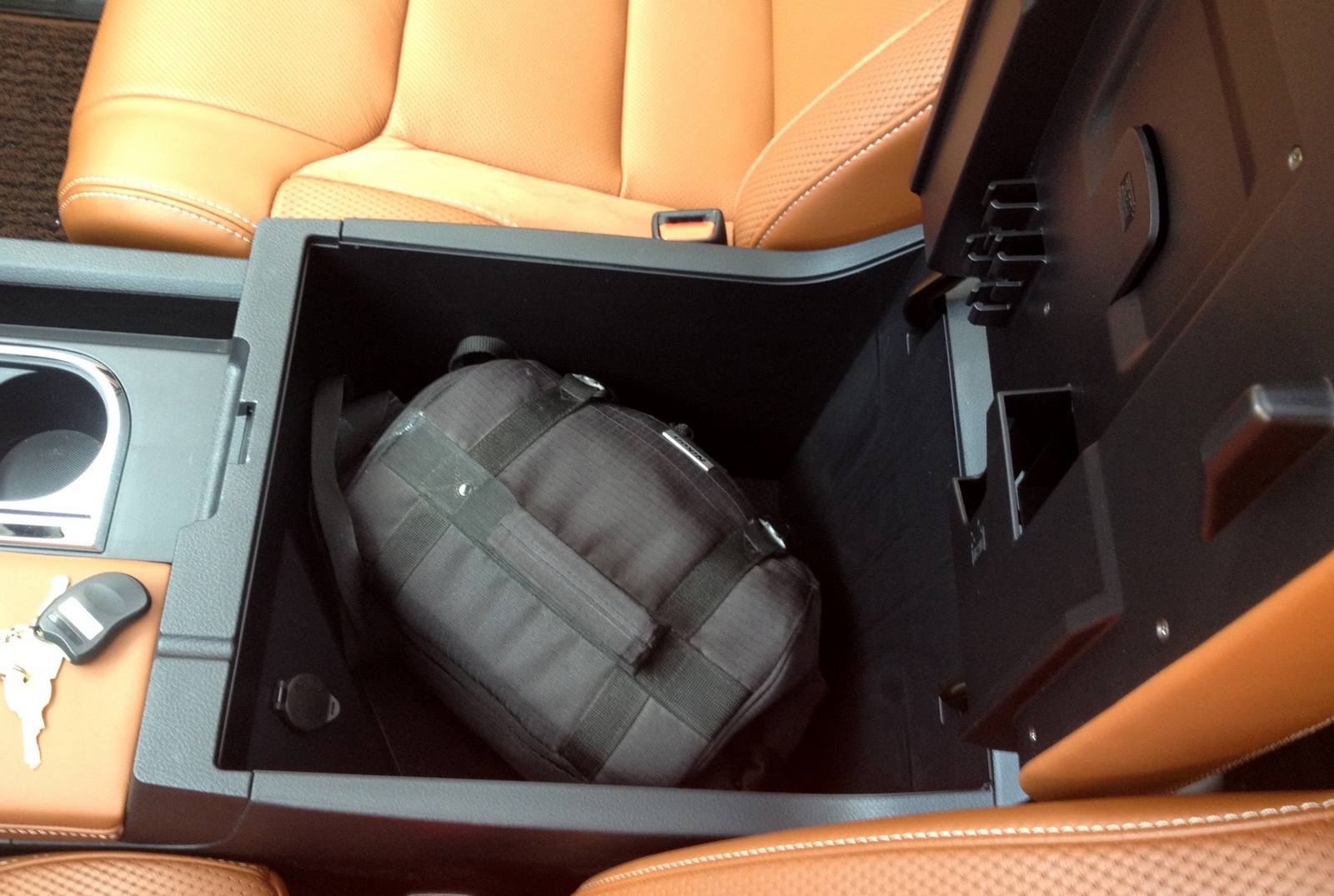 The engineers that worked on the third-generation Tundra must have spent time around American trucks or all rented a condo together near a farm in Texas. There seems to be a deeper understanding built into this truck as to how people will use it.

First, it has cupholders and cubbies everywhere. It also has a very large center console, which can hold any number of items. Interestingly, it's not as deep as GM's center bin, which could be a good thing. If you have a box that measures nearly a foot in every direction, you are bound to lose things at the bottom. The Tundra's shallower box makes sure the pile of crap that's sure to make its way into the center bin can get only so high.

One of my favorite features on the Tundra is the power rear window. Unlike many competitors that have either a manually sliding or power sliding panel that's about 8 inches wide, the entire rear window of the Tundra slides into the rear wall. This feature is standard for the Platinum and optional for lesser models. It completely changes the feel of the Tundra’s cabin. On a sunny day, roll down all four windows, open the sunroof, and lower the rear window, and the Tundra has an open-air feel. The only problem with the rear window is that it moves around a lot of air, and at highway speeds, the rear seatbelts are likely to flap around in the wind, which could prove annoying. 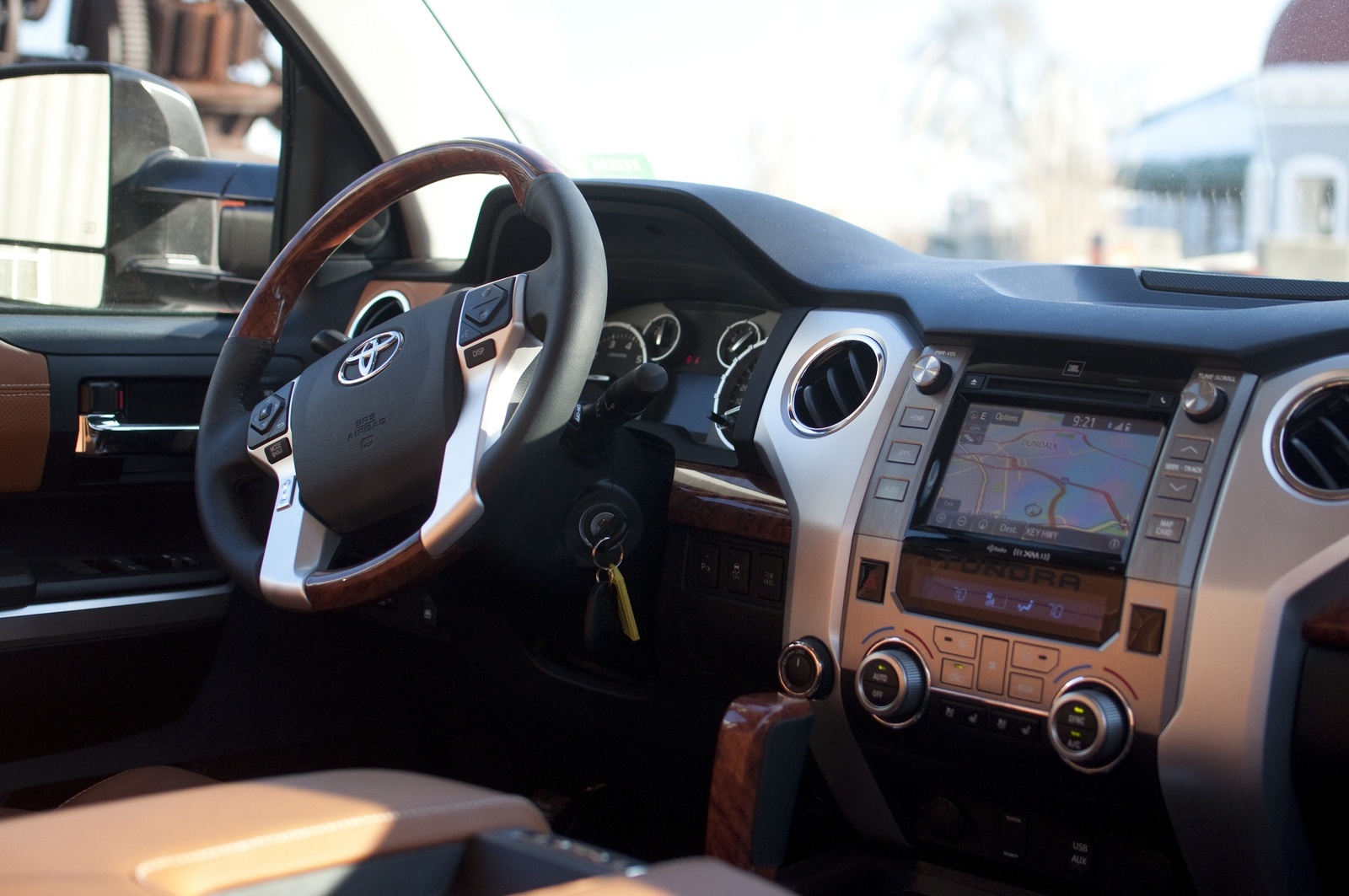 The Tundra benefits from Toyota’s general approach to technology, which is advanced, yet easy to use. Up-rated trims like our Platinum feature Toyota’s Entune system, which is a suite of apps that provides weather and traffic information as well as Pandora streaming radio and even BING web searches and restaurant reservations through OpenTable. Additionally, when connected to a smartphone, Entune provides updates for sports, stocks, fuel prices and weather. It is a very comprehensive system and as easy to use as an iPad or tablet. 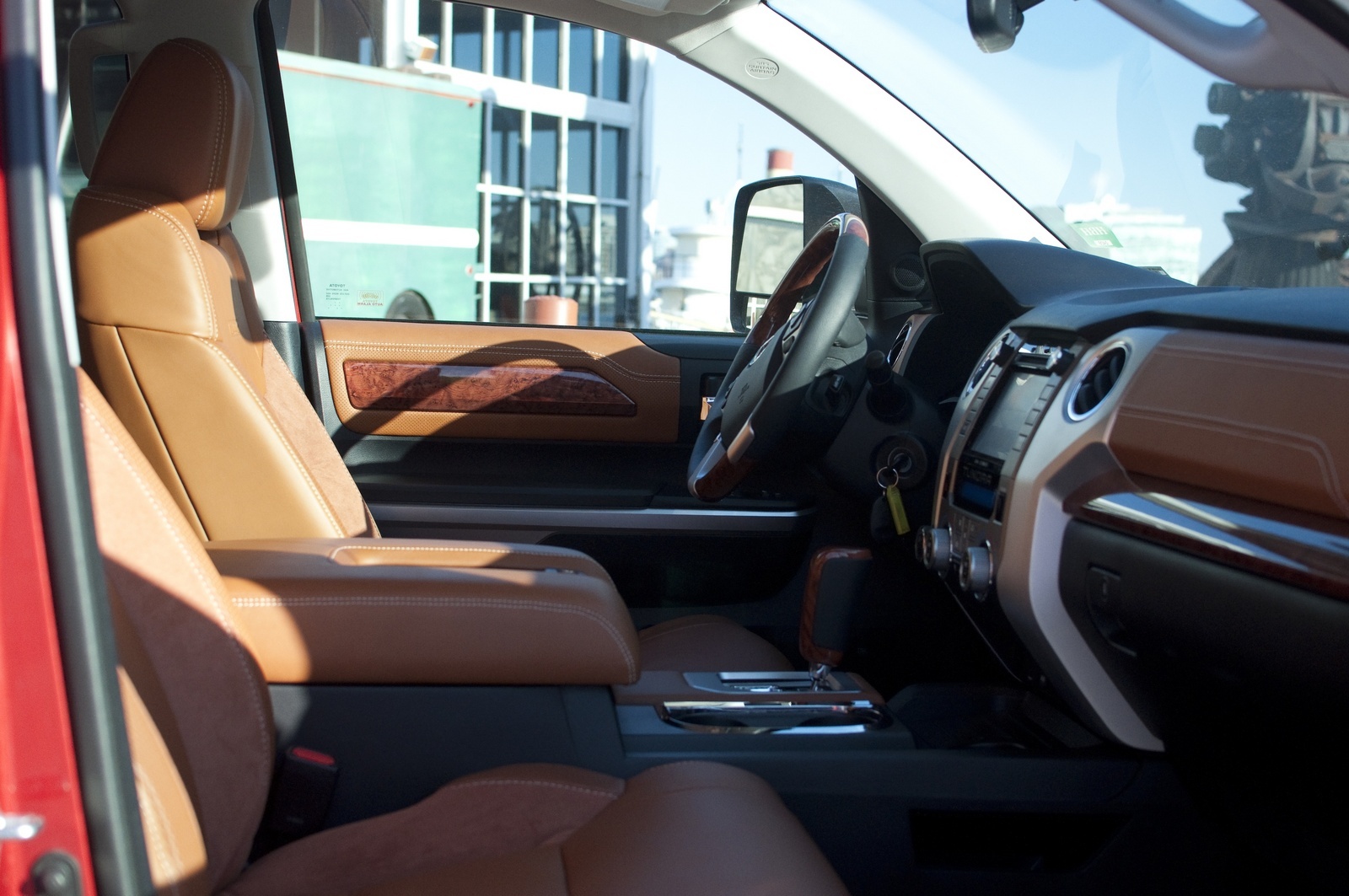 Optional safety equipment includes proximity parking sensors and a blind-spot monitoring system with rear cross-traffic alert. This is on top of standard safety features like front and side impact airbags, a tire pressure monitoring system and trailer sway control.

The Tundra scores 4 out of a possible 5 stars in all NHTSA crash tests. 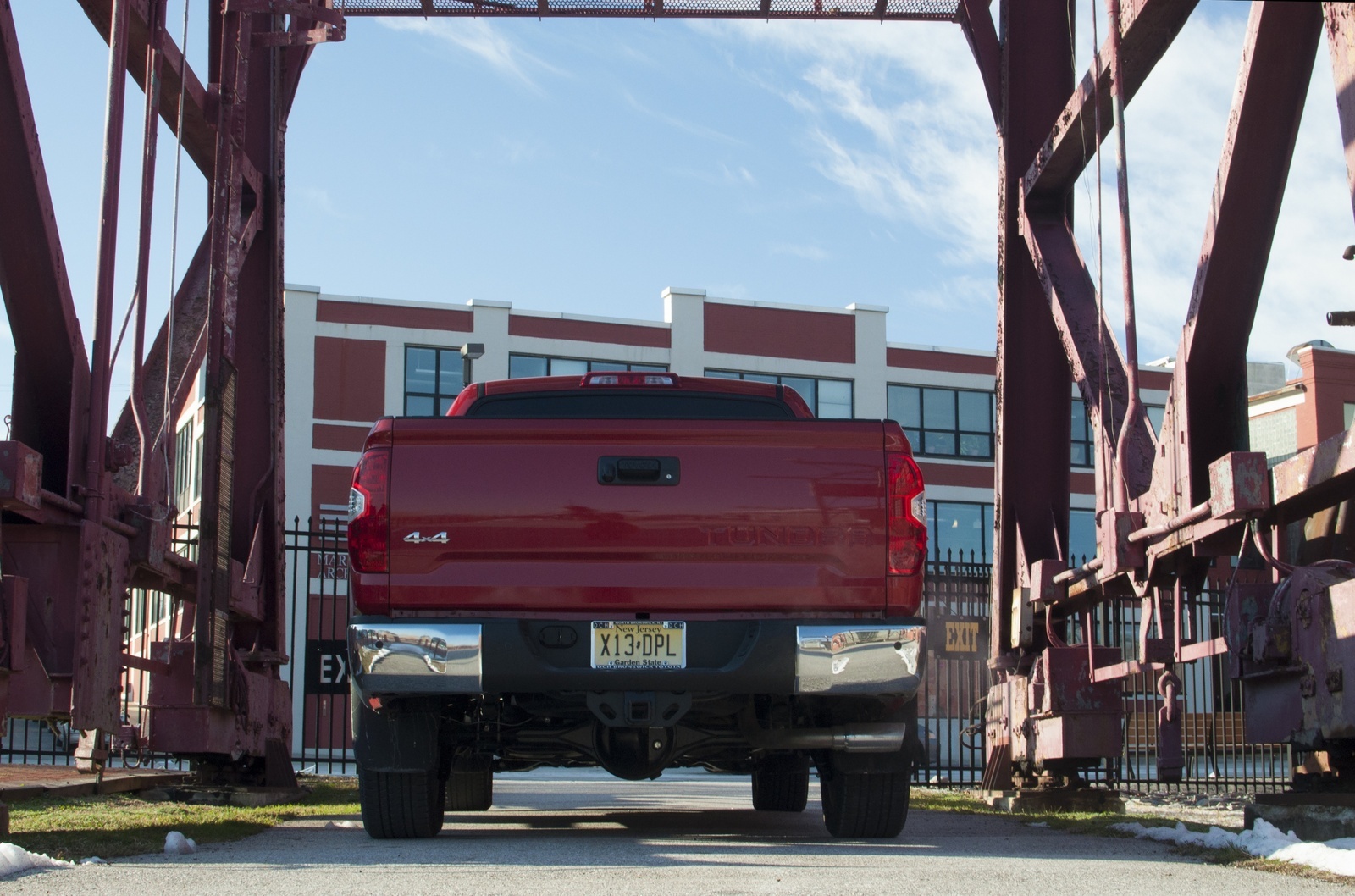 Truck owners are a proud bunch. They like to talk about towing and torque, and at times the Tundra has been chided as a pretender truck. What buyers should know is that the Tundra is, in fact, built in the good ole U-S-of-A. It is assembled in Toyota’s San Antonio, Texas, plant. For reference, some versions of the Chevrolet Silverado are built in Mexico and Canada. How “American-made” is that?

The Tundra does not do well in the fuel-economy department. Perhaps this is because Toyota was catching up to the Big Three in machismo while the Big Three were looking at fuel economy (which are typically opposites in most corners of the auto industry). At the end of the day, a truck is going to suck down fuel—it's just a question of how much you're willing to accept. If you are used to driving older trucks, the Tundra actually has better fuel economy than those vehicles, and compared to its modern contemporaries, it makes an exemplary vehicle for a weekend warrior—or a contractor.

Jim TRD has used toe out on the rear axle with the result, stability and ride over level crossings or washboard roads is the best that I have experienced

Users ranked 2014 Toyota Tundra against other cars which they drove/owned. Each ranking was based on 9 categories. Here is the summary of top rankings.

Have you driven a 2014 Toyota Tundra?
Rank This Car

Want To Purchase A Vehicle But Owner Still Owes Money On Car Loan.

want to purchase a truck owner still owes money on it. He lives in new jersey and i live in pa. how long does this type of transaction take?

2014 Tundra No Power Except Security Light

I went to the store this morning on a clear day came back home and set back out a few hours later. The key fob didn't unlock the truck and I noticed I had no power and truck will not turn over. I c...

How Does The Buy Back Guarantee Work?

When purchasing a car through Car Gurus, how does the buy back guarantee work?

I listed my vehicle for sale on your website. Carfax said accident reported. I have owned since new and it has never been in an accident. I pulled the car fax report myself and it shows no accidents r...