Kia's Soul is a compact hatch with the tech to make it useful for drivers of any age, but it's particularly rewarding for younger shoppers that need to be entertained while they make the daily commute. 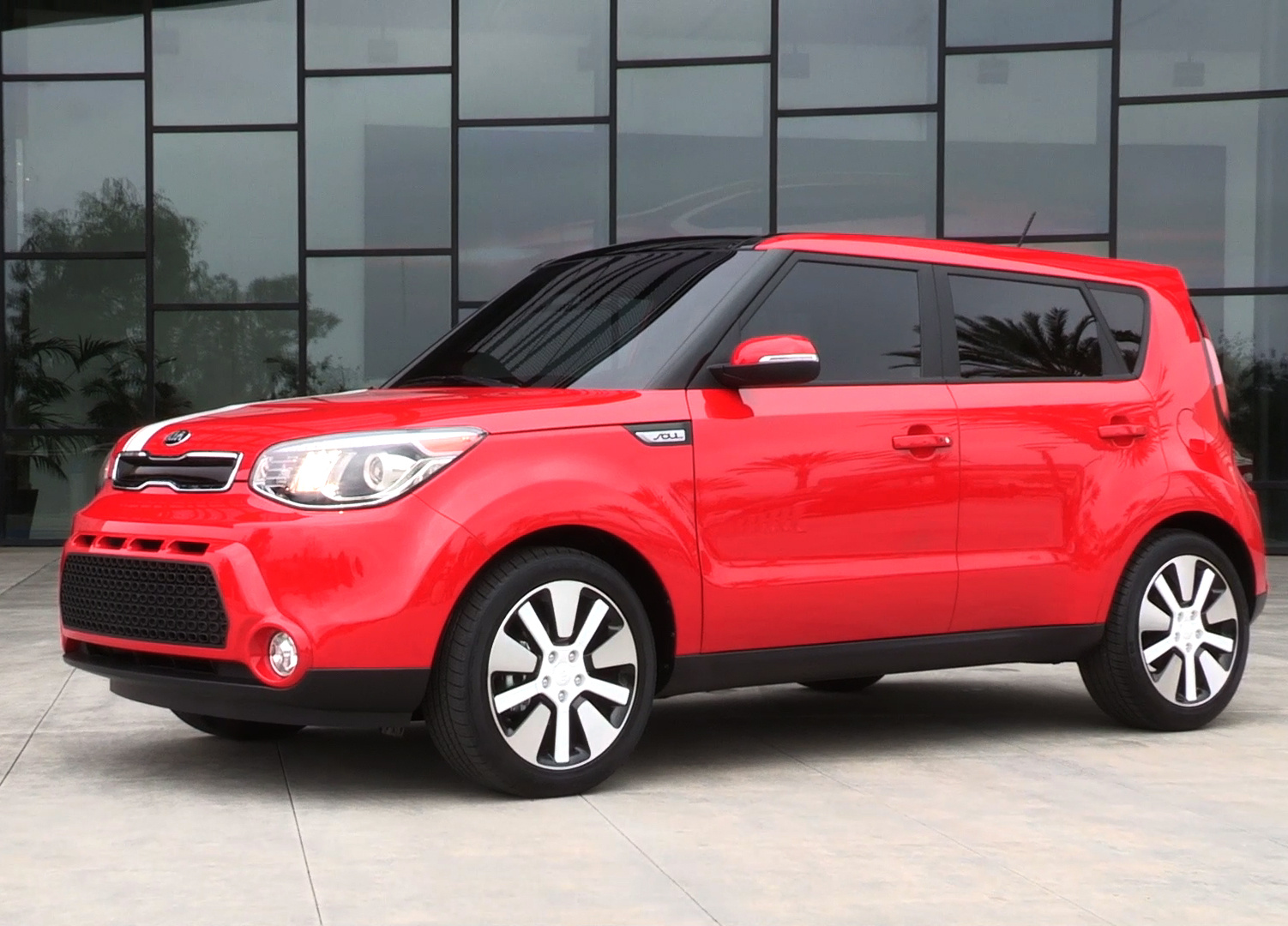 A car does not always have to be a V12-powered exotic supercar to make a statement. Take the Kia Soul, for example—it's hard to think of another vehicle whose purpose is to be a fuel-efficient, daily-driver hatchback that manages to snag attention anywhere it goes despite its sensibilities. It's a car that is meant to attract not the enthusiast, but the younger driver that is enthusiastic about something—anything! Although if you watch Kia’s ads, they might prefer you to be enthusiastic about electronic music or hamsters.

The Soul can be a perplexing vehicle, but after a week behind the wheel, we grew to appreciate what it's good at, realizing that its high points more than make up for its lows. The strong suit of the Soul—aside from letting others know you have arrived on the scene—is making an even stronger statement from behind the wheel. 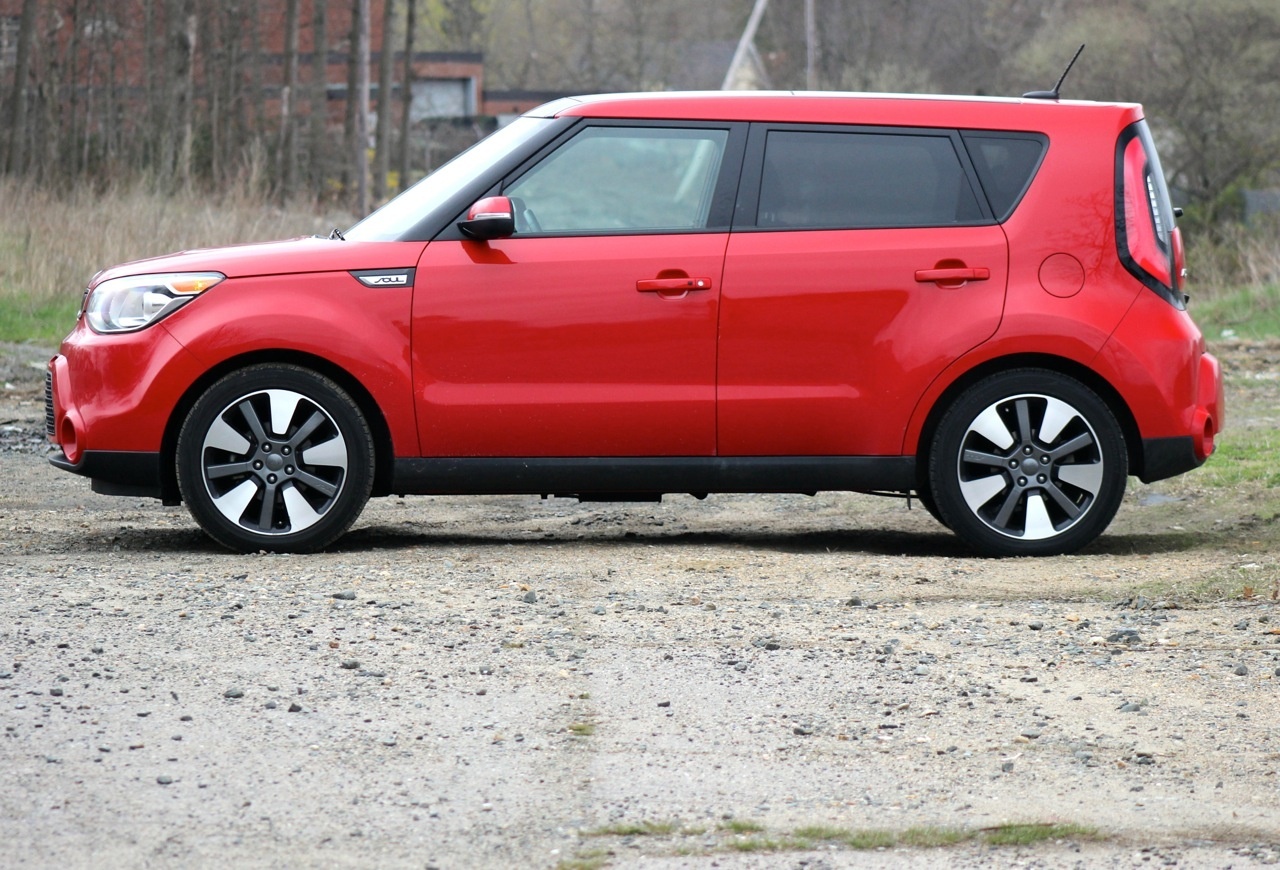 The 2014 Kia Soul might look much like the 2013 version, but it's actually a completely new vehicle. The new Soul is wider and has a longer wheelbase, but keeps the same height. Unless you put the two vehicles together, you might not even realize the vehicle has been redesigned. Fog lights were moved to the center lower grille, and the two-level headlights have been replaced by a single unit that mimics the old design, but in a smoother fashion. The result is a far cleaner frontal appearance.

The real changes take place inside the Kia Soul, where its formerly somewhat staid interior has been ditched in favor of something truly unique. It seems like every single button, vent, speaker and angle have been crafted to look like something out of a trendy coffee shop.

The steering wheel bears a whimsical appearance, with audio, phone and cruise controls that appear to be free-floating. The dash panel itself is quite clean, flowing into the center stack. Perhaps the most impressive aesthetic choice was the design for the vent/speaker combination. It looks like some sort of deep space outpost that would make Isaac Asimov proud.

Oh yeah, and just like in the previous Soul, the speakers light up and strobe with the music.

The base comes with features like a multifunction steering wheel, Bluetooth hands-free connectivity, SiriusXM satellite radio and USB/auxiliary audio inputs. The Plus trim ups the ante with mirror-mounted LED turn signals, remote keyless entry and 17-inch alloy wheels. The Exclaim delivers the goods, such as standard 18-inch alloys, a backup camera, UVO connectivity services and even a chilled glovebox—all standard. 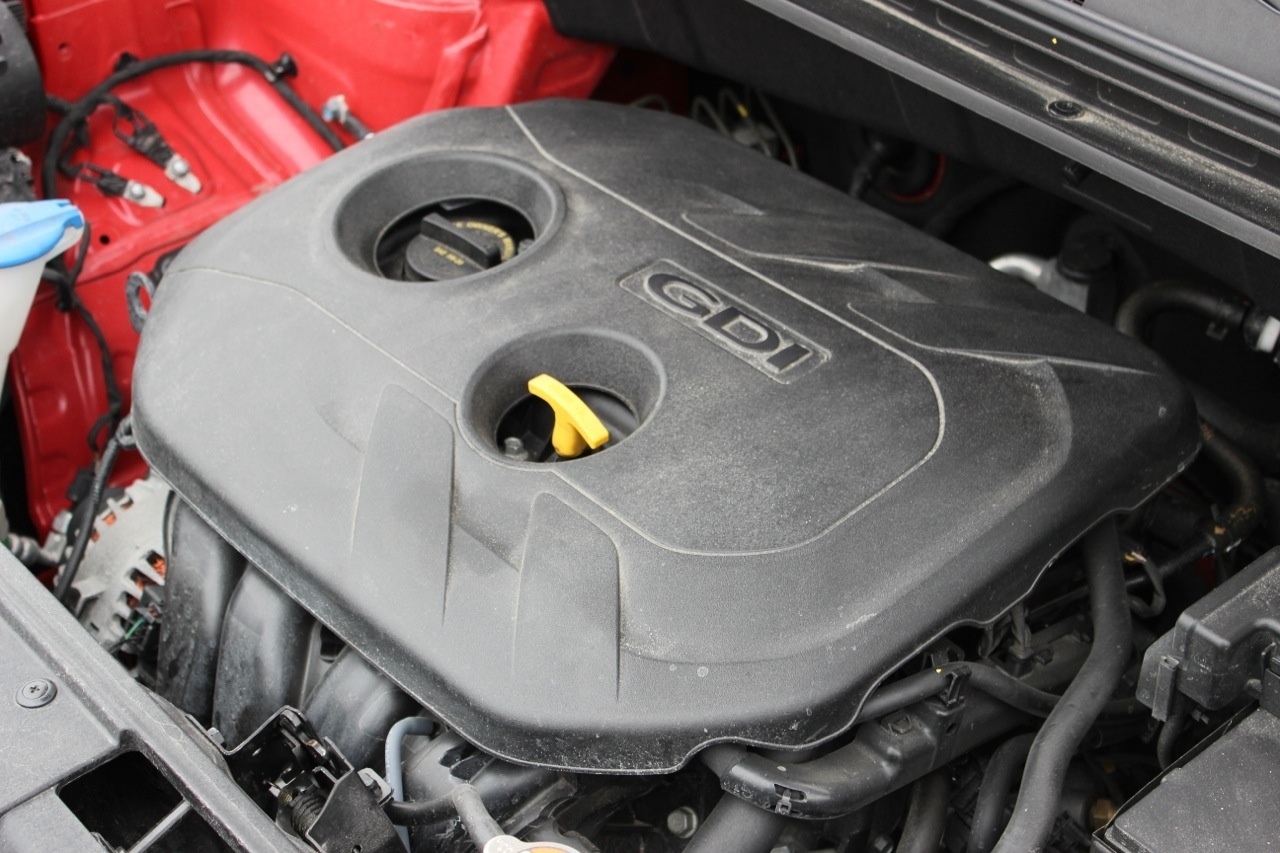 The Soul does not scream agility, based on its boxy construction, but it will take a turn surprisingly well. It’s just going fast enough to make it fun that's the problem. The base trim comes equipped with a 1.6-liter inline 4-cylinder that makes an anemic 130 hp. Opt for the Plus or Exclaim, and you’re rewarded with a 2.0-liter inline 4 that makes 164 hp. Neither engine will motivate in a big way, but thankfully the 6-speed automatic manages power in a decent manner, provided you employ the manual shift mode.

We’d like to say that the Soul's sub-par performance is worth it for impressive fuel economy numbers, but that's just not the case. The smaller 1.6-liter inline 4 returns 24 mpg city, 30 highway, no matter whether you choose the manual or automatic transmission. The 2.0-liter engine returns 23 mpg city and 31 highway. These are respectable numbers, but wouldn't have been standout since 2004.

Thankfully, the Soul does have surprisingly agile driving characteristics. Steering is soft yet responsive in normal driving conditions. The Soul has a steering mode select that allows for Normal, Comfort and Sport driving modes. Operated via a toggle on the steering wheel, it actually tunes the electric power steering on the fly to deliver these unique driving characteristics. You can actually feel the difference—if only the engine/transmission had a similar function.

Perhaps one of the most surprising elements about the Soul is its ability to stay level through quick turns. Such a top-heavy vehicle should yield white knuckles from many driving maneuvers, but the Soul keeps its composure. It might not be enough to entice the performance driver, but it will be more than enough to keep the average driver feeling confident during the daily commute. 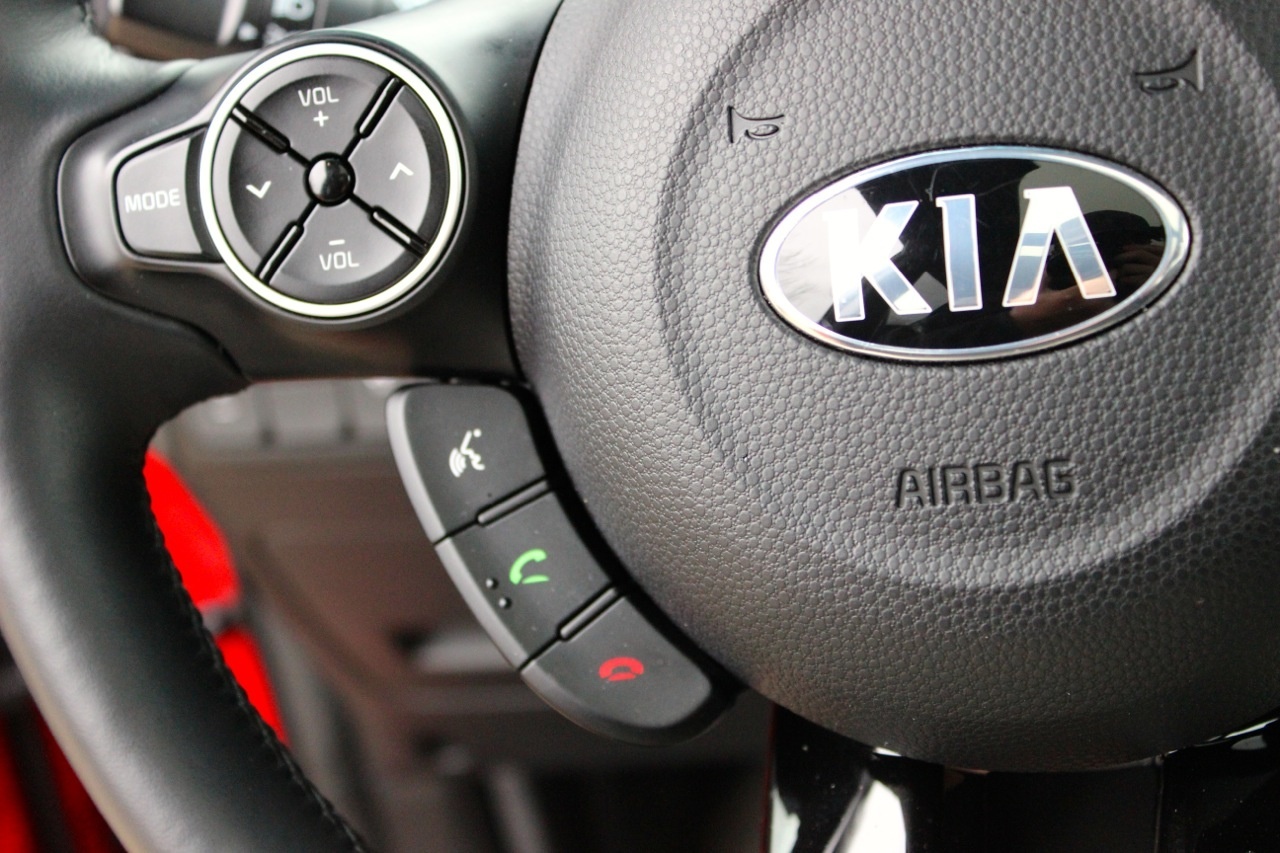 As you might have guessed, the big box known as the Soul is pretty spacious, especially for the driver and front passenger. Legroom and headroom are ample—you could probably wear a ten-gallon hat while sitting in the driver’s seat. The second row is also quite spacious—not as much as the front, but enough to make long drives enjoyable. That long drive will also be made more enjoyable with the available sunroof. It's nearly the size of the entire roof!

Despite this impressive passenger space, cargo room is not as generous. The rear cargo space is not Chevy-Spark-small, but it is smaller than perhaps the footprint of a conventional small. One can use the Soul’s height to stack items in the back, but they would likely come crashing back down on you when you open the hatch. The cargo tray that splits the rear cargo space further eats into available storage capacity.

If you're serious about moving large items, fold the rear seat down, and the situation improves vastly. Cargo room jumps from 24.2 cubic feet to 61.3 cubic feet and is in the boxy shape of the Soul, which actually makes that space more usable than in other hatchbacks, with their swept designs. 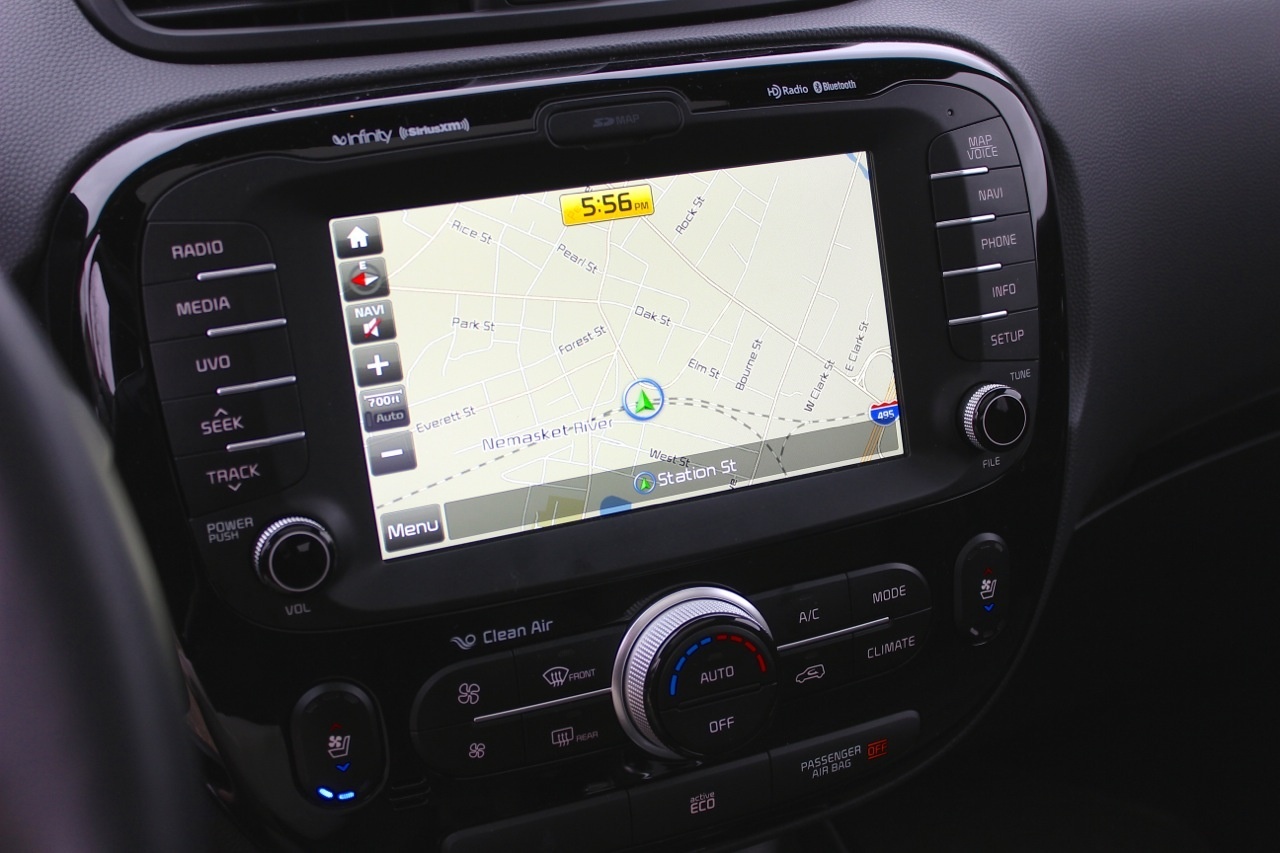 One of the true strong suits of the Soul (and the rest of the Kia lineup, for that matter) is technology. Kia prides itself on offering Bluetooth hands-free calling as a standard feature, and things only get better from there. All trims of the Soul come standard with USB/auxiliary jacks, steering-wheel-mounted audio controls and a 6-speaker audio system with A-pillar-mounted tweeters.

Our test model had the uprated Infiniti audio system, which comes equipped with a center speaker, subwoofer and external amplifier. Another very fun option is the speaker lights, which surround the door-mounted audio units. They can change color and even pulsate to the beat of a song.

These are fun frills that for which the younger set might have a greater appreciation, but buyers of all ages will appreciate the voice-command navigation system. The optional system is centered around the 8-inch touchscreen, which is incredibly vivid, employing high-contrast colors.

Perhaps one of the most important elements to a high-feature in-dash navigation system is not the amount of apps that are crammed into the system, but the manner in which they are organized. The Soul’s navigation menu and other menus within the touchscreen are laid out in a very intuitive manner. Jumping from audio to navigation controls is as easy as hitting the tactile buttons on either side of the nav screen.

The system is also driven by a powerful voice-control system. It allows the driver to make complex commands, such as saying an entire address in one command, rather than breaking it up. Also, when calls are placed, the electric-green-on-black typeface is entertaining.

In short, the Soul is a compact hatch with the tech to make it useful for drivers of any age, but it's particularly rewarding for younger shoppers that need to be entertained while they make the daily commute. 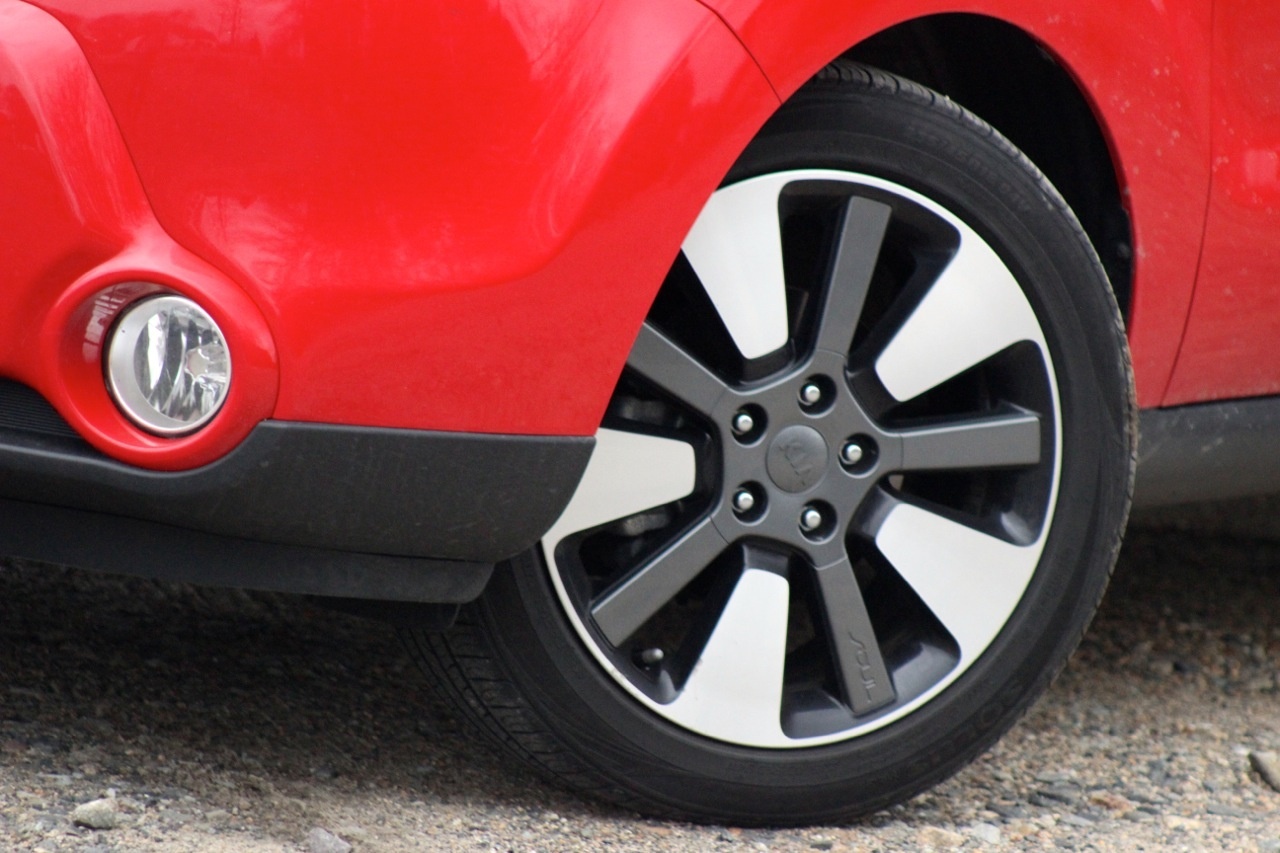 Uprated models feature a backup camera, located in the vivid center touchscreen, but all models can take advantage of the Soul’s upright design. It provides a more old-school greenhouse, with better sight lines than many of its more curvaceous contemporary competitors. 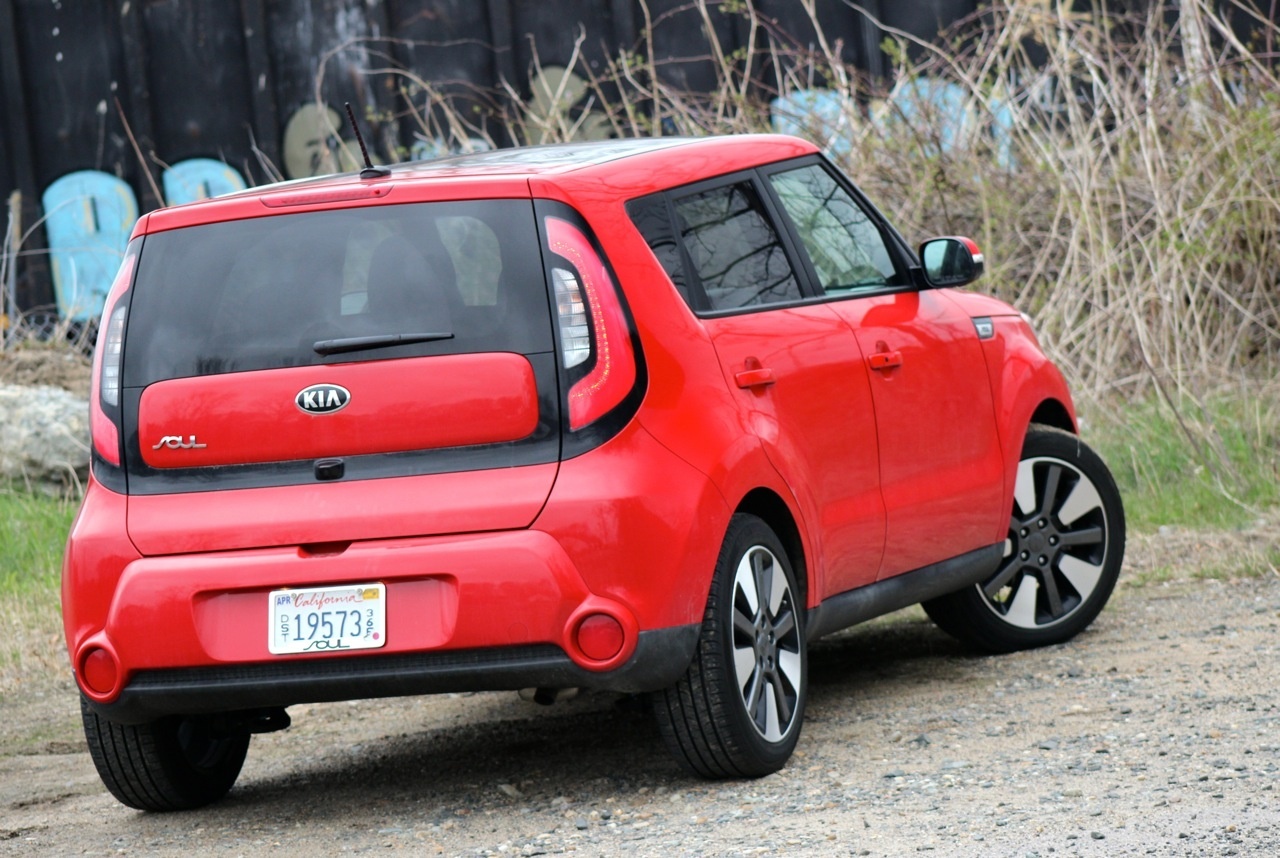 It's hard not to look at the Soul as a solid value. A Soul with all the goodies, like our test model, should come in around $26,000. The top-tier Exclaim trim, before options, starts at $20,000. You’d be hard-pressed to find another vehicle on the market that delivers driver and front passenger space at that price. It won’t break the bank to get a Soul with some key features that you need, and if you are looking to get into a base version, standard Bluetooth is something you won’t find in several of the Soul's competitors.

Then there is the Soul's style, which is a make-or-break item. If you're looking to make an impression on a budget, there's no vehicle that offers better looks-per-dollar than the Kia Soul. It makes a strong visual statement without breaking the bank, and for that reason alone the Soul is an incredible value.

Gregoree Personal impressions after one year of ownership summary: Bottom line, the 2014 KIA SOUL (2015 SOUL is identical) is at best an average vehicle because it has truly lost some SOUL compared to earlier iterations that should have been refined and improved. Improving actual performance (e.g., fuel efficiency, handling, and power) is more important than marginally improved electronic gimmicks and gadgetry - stereos and blue-tooth really don't need much tinkering currently. Overall, the KIA Soul is an average vehicle whose low price benefit quickly diminishes when purchasing anything above a stripped down base model. Personal initial impressions of this vehicle were good, but in a short amount of time, issues with the blower motor (electrical whine), excess wind noise, poor performance, and interior deficiencies became apparent after only two weeks of real-world driving ownership. Firstly, the automatic transmission is too soft as it hesitates and loses power when shifting from 2nd to 3rd and 3rd to 4th under normal acceleration. While the vehicle is rated at 164 horsepower and 151 lb. ft. torque, acceleration is surprisingly strained and underwhelming, suggesting rated numbers are likely inflated (as is fuel efficiency unless vehicle is driven very mildly). Steering is vague, and although there are three different electronic steering options, being comfort, normal, and sport, selections only result in steering wheel weight change while there is no difference in actual steering responsiveness. Brakes are OK, but braking feel is vague and not linear. At highway speeds, especially between 50 and 70mph, wind noise/wind turbulence is very pronounced along the driver-side window area; surprisingly, this noise, reportedly normal, is not exhibited along the passenger-side window area. Overall cabin room/space is good although visibility is poor given larger pillars obscuring views. The 2014 2.0L auto boasts 22 more horsepower and 2 more gears than the 2010, but the new 2014 model MPG is no better real world than the 4 speed, lesser powered 2010 model.

PatLS Bought new. Very hard to see out of when I am changing lanes. the wide right rear panel block view. I have had starting problems since October 2015. I never go anywhere without my jumper cables. In November 2015 I had to leave the car at dealership for 3 days so they could try to figure out the problem. They decided I needed a new battery.I am still having starting problems.I brought the car in last month they said there is no problem. Yesterday had to have it jumped 3 times. I'm discusted.

Is there a letter for preapproval?A dealership is asking for one.

Are there any other engines you can replace the 2014 2.0L Kia Soul engine with?

Car starts up fine going down Road once hits 3,000 RPMs it dies out no power but still keeps going

2014 Kia Soul wouldn’t start next morning. No problem before. Drive every day. Battery checked out fine after a 4 hr recharge. What could be draining the battery? My professional mechanic coul...