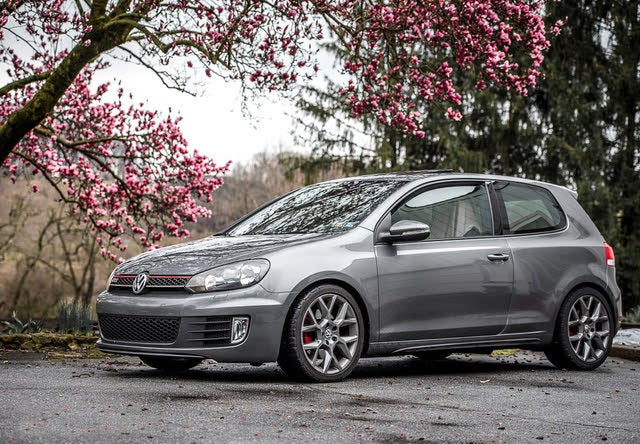 The 2013 Volkswagen GTI continues to pack a lot of punch for a small, sport-oriented hatchback, delivering a potent mix of solid performance, crisp handling, upscale interior features, decent fuel economy and overall good value. In addition, it provides the cargo-friendly versatility of a hatchback, resulting in an automotive package with worldwide appeal.

The GTI (which is based on the VW Golf/Rabbit) debuted in Europe 35 years ago and first reached U.S. shores nearly three decades ago. Since then, year after year, it has set the standard as the "hot hatch" of choice and continues to garner numerous awards. Automobile Magazine, for instance, named the 2012 GTI one of its "All Stars" for the sixth year in a row and called the GTI one of its "10 Best" cars of the year as well. In addition, U.S. News & World Report tapped the 2012 GTI as the "Best Upscale Small Car for the Money."

For 2013, Volkswagen offers the GTI in 2-door and 4-door hatchback versions, with both body styles available at base 2.0T, 2.0T with Convenience and Sunroof, 2.0T with Sunroof and Navigation and 2.0T Autobahn trim levels. Now nearing the end of its sixth generation, the GTI receives only minimal updating for 2013, in the form of a new set of 18-inch Laguna aluminum-alloy wheels for the 2.0T Convenience and Sunroof and the 2.0T Sunroof and Navigation trims, which help differentiate them from the rest of the lineup. Other than that, the GTI remains unchanged from the previous year. However, changes are on the way. A new VW Golf will debut at the Paris Auto Show in the fall of 2012 as a 2013 model, and a new GTI is expected to be unveiled at the Geneva Auto Show the following year as a 2014 model.

For now, the GTI retains its steamlined, sport-oriented exterior design, highlighted by a deep black honeycomb-mesh grille, twin air intakes and teardrop-shaped headlights out front. Short overhangs and a hunkered-down stance, along with subtle wheel arches and black side skirts, give the GTI an aggressive appearance. In the rear, a duckbill spoiler, horizontal taillights, smoked red brake lenses and dual exhaust tips complete the GTI's sporty look.

Power for the GTI comes from a turbocharged, DOHC 2.0-liter TSI (Turbocharged Stratified Injection) 4-cylinder engine with direct injection and an intercooler. The engine produces a peppy 200 hp and 207 lb-ft of torque, with all the torque delivered in a flat line from 1,800 to 5,000 rpm. The turbocharger adds to the engine's responsiveness, goosing power when needed during acceleration or passing situations. Reviewers report minimal turbo lag.

The GTI's 4-cylinder powerplant mates to a 6-speed manual transmission, which comes standard. Owners can also opt for an available DSG dual-clutch 6-speed automatic transmission, which provides quick, precise shifts and gives drivers the option to shift manually, either by tapping the shift knob or flicking the steering-wheel-mounted paddle shifters. The engine posts relatively decent fuel economy numbers of 21/31 mpg with the manual shifter, while the precise shifting of the dual-clutch automatic boosts fuel economy to 24/33. Despite the better numbers with the automatic transmission, the majority of testers prefer the manual shifter for a sportier driving experience.

All GTIs ride on a front-wheel-drive platform and European sport-tuned suspension with independent MacPherson struts in the front and a fully independent four-link configuration with telescopic shock absorbers in the rear. A stiff, tubular anti-roll bar in the front keeps body lean to a minimum, and helps improve feedback through the electromechanical power steering system, which gets good marks from testers. Overall, the GTI delivers precise, responsive handling, reviewers say, although some note they'd like to see a firmer ride from the suspension, which they say is tuned more for everyday drivers than for true enthusiasts. The Base 2.0T rides on 18-inch Detroit alloy wheels, while the Autobahn gets 18-inch Serron alloy wheels. The other GTI trims ride on the new 18-inch Laguna wheels. All GTI trims come with all-season tires.

Safety features for the GTI include 6 airbags, as well as electronic stability control, anti-slip regulation (traction control) and antilock brakes with hydraulic brake assist. The GTI also includes VW's Intelligent Crash Response System, which unlocks the doors, switches on the hazard lights and shuts off the fuel pump in the event of a collision. The IIHS gave the GTI a top rating of Good for protecting passengers in all types of crashes and named it a Top Safety Pick in 2012. The NHTSA gave the 2013 GTI 4 out of 5 stars for protecting passengers during a rollover, but has not tested the GTI for frontal or side crashes.

It's clear that the 2013 GTI is simply treading water until the redesigned version makes its debut for 2014. However, the current GTI still has plenty to offer driver-enthusiasts, even if they're only using the car to run to the grocery story or head off to the office in the morning. Competitive vehicles such as the BMW 1 Series, the Audi A3 and the Acura TSX may have more to offer in the form of performance and amenities, but they're also much more expensive than the GTI. Owners who seek a relatively affordable sport hatchback will be hard-pressed to find a better-equipped, better-performing vehicle in its price range. And with a new version in the pipeline, buyers might be able to get a great deal on a 2013 GTI at their local VW lot.

What's your take on the 2013 Volkswagen Golf GTI?

Users ranked 2013 Volkswagen Golf GTI against other cars which they drove/owned. Each ranking was based on 9 categories. Here is the summary of top rankings.

Have you driven a 2013 Volkswagen Golf GTI?
Rank This Car

I think I over filled my oil just now. TThe check engine light is on and it's smoking

Is It Worth Replacing My Steering Wheel To Correct Broken, Decorative Threa...

The decorative threads on my steering wheel are broken in one place. The only way to correct this is to replace the entire steering wheel. Is this worth it or just asking for trouble because of al...