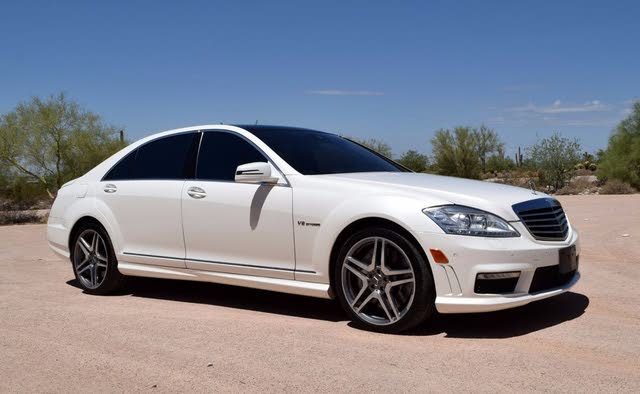 It’s hard to be disappointed with an engine lineup that starts with a twin-turbo V8 packing 429 horses and a road-ripping 516 lb-ft of torque. Of course, we expect little else from an offering like the S-Class. In order to do any proper road-ripping, you’ll actually have to disengage the flood of safety features that prevent deviations outside intended lines. You may think this is an aberration in a performance luxury sedan, but the S-Class has a long tradition of leading the way in safety tech—it was the first European car fitted with airbags.

Performance and luxury are still the real stars, however, and the S-Class offers both in several flavors. This means your S can be had with everything from a hybrid to a diesel to a V12 monster, all of which seem to subsist on a steady diet of money.

Starting with the least thirsty at the pump, the S350 BlueTEC gets a 3.0-liter turbodiesel V6 that offers a not-unimpressive 21 mpg city/31 highway with the help of a 7-speed automatic and despite the standard efficiency penalty of 4MATIC AWD. The S400 adds complexity seemingly at the cost of efficiency, for its 3.5-liter V6/electric motor combo is able to manage only a reported 19/25, even with the 7-speed automatic. What’s worse, in real-world testing actual mileage came out about the same as the S550's with its aforementioned 429-hp, 4.6-liter, twin-turbo V8 and an "official" 15/25 mpg rating.

I suppose it’s the thought that counts, and maybe we can toss some stickers their way for effort. It’s especially frustrating when it just bests the insanely stout S63 AMG, which offers 15/23 from its 5.5-liter bi-turbo V8—a mill that manages 536 hp and 590 lb-ft of torque. Mercedes predicted many would be disappointed with those numbers, so a performance package has been offered that bumps turbo boost pressure up to a gasket-eating 18.8 psi from 14.5, a change that will increase power to 566 hp and 664 lb-ft of torque.

So that takes care of performance, but what about the luxury? All U.S. S-Class trims get the longer wheelbase, so the room is there whether you’re going for front seat or back, and you’ll be greeted by more than your fair share of leather and wood trim once inside. The ride is supple whether going with the base air suspension or the optional active system—both benefiting from tech like Active Body Control as well as standards like traction and stability control. You’ll get luxuries like a power tilt and telescoping heated steering wheel, a power rear sunshade and the choice of a standard sunroof or an optional panoramic unit. Seats get heat and ventilation for their multi-contours, and parking guidance and a rear-view camera were added to all models this year.

LEDs are employed for running and brake lights front and back, and the standard ambient lighting for the interior now comes in your choice of three moods—solar (amber), neutral (white) and polar (ice-blue).

For some additional safety, Mercedes seems quite focused on making sure you don’t fall asleep. Standard on all S-Class trims is Attention Assist—a system that alerts you with visual and audio signals when your driving patterns suggest drowsiness setting in, while the optional Lane Keeping Assist system will actually vibrate the steering wheel when the vehicle wanders from its lane without the turn signal engaged. The latter even comes coupled with Blind Spot Assist, which will yell at you if you do manage to activate your turn signal with one or more vehicles sitting in your blind spots.

The S-Class is due for a redesign next year, but this is still one of the best offerings in the class. Some will call Lexus's LS more understated and elegant, and some will correctly point out that the Jaguar XJ is more nimble, but you’d find it difficult to locate a better package than the S-Class. Wait for the redesign or no, if you’ve got a couple hundred grand to throw around you could certainly do worse.

What's your take on the 2013 Mercedes-Benz S-Class?

JSATL Just bought a new S350 diesel. Given the year end styling change and diesel fuel, was able to negotiate a discount greater than 15%...basically paid for the sport package, the safety package and all the other add on goodies. Love the car, drives well, peppy and while on the road, driving conservatively, averaging 36 mpg! Outstanding Love the diesel (had em before and have always loved the MB diesel)!

Users ranked 2013 Mercedes-Benz S-Class against other cars which they drove/owned. Each ranking was based on 9 categories. Here is the summary of top rankings.

Have you driven a 2013 Mercedes-Benz S-Class?
Rank This Car

I Have My Car Listed. Why Does It Not Show Up On The Available Cars?

I just put for my car up for sale a couple of weeks ago and I do not see it listed. Why is that?

I Have A Gorgous Mercedes S550 That Has A Rebuilt Title, Where Can I Trade ...

are there any new or used car dealers that accept rebuilt titles for a trade? my car (2013 Mercedes S550) is just gorgeous and I need to down-grade to a smaller car.. any suggestion for who can accept...

S550 Looking For The Classic Year

I am considering purchasing an S550 and would like feedback on the best year to get. I am an owner of a W220 S500 1998 which was perfect for me. I consider it a classic and would like to have a simi...

We Accepted An Offer But Didn't Hear Back From CarGurus. What Should We Do?...

We accepted an offer but didn't here back from CarGurus. What should we do next?

How is vehicle shipping arranged? Through the dealer, a shipper, or CarGurus?