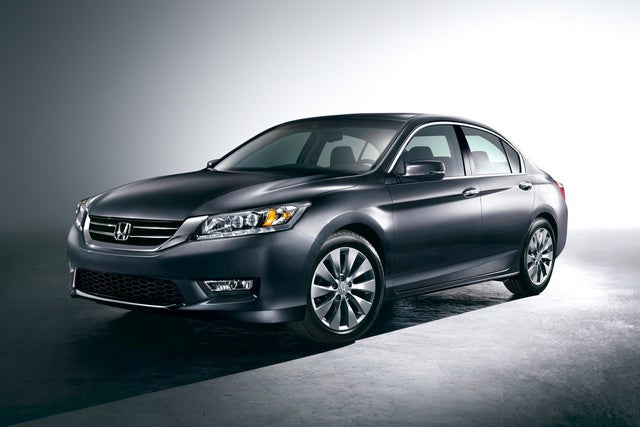 Average user score
4.6 ⁄ 5 stars
Based on 41 reviews
Affordable Honda Quality/luxury With Good Safety Features by RoseA — I like the orchid white exterior and tan leather interior. It makes the car look good. Look at the pics I uploaded, it's a looker. The car is very spacious. Some say this model rides a little ruff, bu... Read more
Earthdreams by Steve — You open the hood, and the first thing that jumps out is the engraved engine block that says "Earth Dreams" unlike the common "I-Vtec" you see on newer Honda models. The car packs a small punch for be... Read more
Very Nice Family Sedan by joselakeland — I am a SUV person. There are limits for a sedan compare to SUV. Honda Accord is a very affordable and reliable car. It has Bluetooth and backup camera standard. So far no complaints. Mine is CVT trans... Read more

The all-new 2013 Honda Accord is an exciting step into the future, especially after the make's poor sales performance over the last few years. Performance, efficiency, handling and style have received the deepest touch-ups, according to rumors so far, and they would make the Accord downright drool-worthy if the whole package is as good as the preview.

For its new first impression, the 2013 Accord features a streamlined, muscular body with an unmistakeable resemblance to both Accords and famed muscle cars of the past. Although the new look still affords some level of placid anonymity, the streaming lines and emboldened grille give it a certain sex appeal it didn't have before. Interior first impressions are still a bit of a mystery at this point, but if it goes the way of the other recent Honda remakes, you're probably safest expecting some corners to be cut on the inside to make room in the retail tag for the rest of the modifications.

What little we do know about the inside is the newly standard inclusion of Bluetooth, text-to-voice, an LCD display and streaming audio connectivity with Pandora and Apple's iPhone. New safety considerations amount to forward-crash and lane-departure warning systems, but these are likely to be options alongside the new blind-spot monitors and multi-angle rear-view camera. At best the new warning systems will be standard in the top-shelf Accord, but all indications pointing in that direction are merely rumors at this point.

Overall the Accord is lighter, shorter and stockier for 2013, and although the wheelbase is abridged, Honda insists that overall interior space is unaffected. However, these revisions do change the Accord's driving dynamics and fuel efficiency, which coupled with the 3 new engine choices should result in an exceptionally nimble and fun-to-drive package. Honda also suggests the new Accord will have more responsive handling, but doesn't divulge what may change about the suspension or other related components to make such a shift.

As for those new engines, the hybrid Accord is making a comeback on Honda's plug-in system for a top speed of 62 mph with about 10 to 15 miles of electric-only range. A full charge can take as little as 90 minutes on a 240-volt charger, but a continuously variable transmission is the only option available for both this hybrid engine and the revised 2.4-liter 4-cylinder. Performance remains relatively unchanged for this base 2.4, offering 181 hp and 177 lb-ft of torque, but Honda claims fuel efficiency will top its class.

To top off the new engine range, Honda revised the 3.5-liter V6 for better fuel economy and higher output, but hasn't given any specifics as yet. It comes with the option of a 6-speed manual or automatic, and like the smaller 2.4, it too comes equipped with an Eco driving mode.

Don't let the hype get your hopes up too far, though—interior quality is a conspicuously missing detail from Honda's information, and given all the touted improvements, one can only wonder how the company will manage to keep it affordable. The latest Civic took a step back on materials quality recently, too, but perhaps the Accord is one area where Honda cannot afford to skimp. We shall see!

Users ranked 2013 Honda Accord against other cars which they drove/owned. Each ranking was based on 9 categories. Here is the summary of top rankings.

Have you driven a 2013 Honda Accord?
Rank This Car

Cars compared to 2013 Honda Accord

Coolant And Transmission Fluid Running Out

Why is my radiator and transmission fluid running out underneath my car? I just put a brand new radiator in and now its overheating also. Someone please help.

Adding Photos For Selling The Car

can i add photos of the car i am trying to sell?

How Should The The Radiator Fan & A/C Fan Operate When The A/C Is Turned On...

When I have the A/C turned on the fans behind the radiator ( 2 of them ) both cycle on and off ...repeatedly. Neither fan stays on for any length of time. Shouldn't at least one fan stay on when t...

How Do I Add Pictures

This site says I do not have a car for sale. The other site lists my car and details. I want to add pictures to the site. How do I do this?

How To Activate Compass Display On 2013 Honda Accord

2013 Honda Accord Trims For Sale