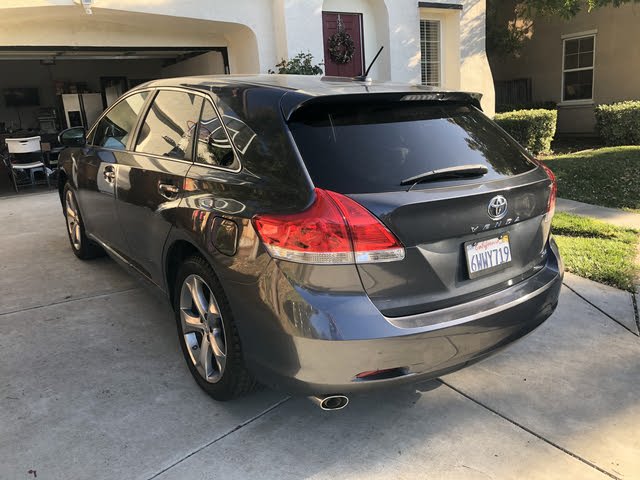 Previously available as only a single trim, the Venza triples its lineup for 2012, as XLE and Limited trims join the base LE.

Since it's based on the Camry sedan, the 2012 Venza delivers a rather mundane ride, and some owners note build quality issues in the cabin.

For buyers who want the dependability of a Camry combined with the utility of a crossover and the comfort of an upscale sedan, the Venza delivers on all three fronts. While a few owners and testers fault the Venza for minor imperfections in the cabin and others would like to see better fuel economy from the vehicle, the Venza offers a comfortable cabin, a solid list of standard features and a great deal of versatility.

Now in its fourth year of production and still in its first generation, the Venza midsize crossover vehicle was designed and developed specifically for the U.S. market, with an eye toward functionality, versatility and bold contemporary styling. Previously available only as a single trim with a few add-on packages, the Venza comes in three trims for 2012, with the XLE and Limited trims joining the base LE. The automaker offers the LE and the XLE with a choice of a 4-cylinder or a V6 powerplant, while the Limited gets only the V6. All three trims come with standard front-wheel drive or optional all-wheel drive. In addition, in a nod toward its SUV DNA, the Venza has ample cargo space and a towing capacity of up to 3,500 pounds.

Based on the pre-2012 Camry, the Venza sits on a 109.3-in. wheelbase, with an overall length of 189 inches, putting it within the size range of a typical midsize sedan. The wide stance and low roofline give the Venza an aerodynamic appearance, though admittedly it still displays aspects of an SUV or wagon. Up front, exterior design features include a distinctive wing-shaped grille, rounded nose, projector-beam headlights and integrated foglights, while an angled rear hatch, color-keyed spoiler with center LED light and wraparound taillights complete the sleek, sporty look. A power liftgate comes standard on the XLE and Limited trims, while a power tilt/slide panoramic sunroof is standard for the Limited and optional for the XLE. Part of the exterior design will change for 2013, however, as Toyota freshens the Venza's appearance with an updated grille, headlights and taillights.

The 2012 Venza was named a Top Safety Pick by the IISH. In addition, IntelliChoice named the Venza a Smart Choice for retained value, and Kelley Blue Book gave the Venza an Overall Consumer Rating of 8.6 out of 10, due to high marks for reliability, styling and comfort. 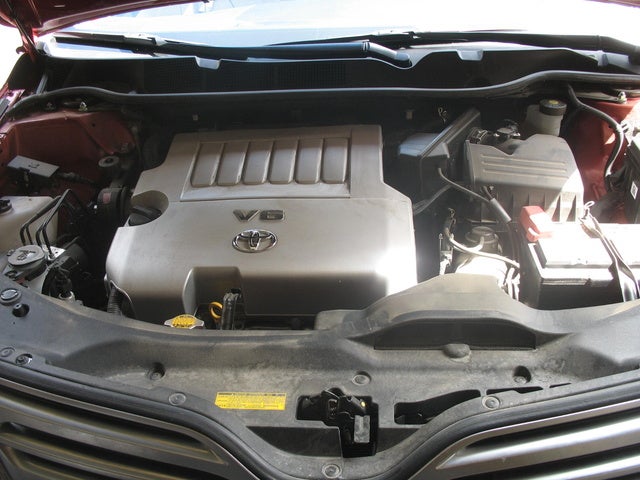 Both the entry-level Venza LE and mid-level XLE offer a choice of two engines. A 2.7-liter, DOHC 4-cylinder engine, which comes standard in both trims, develops 182 hp and 182 lb-ft of torque. Toyota also offers the LE and XLE with an optional 3.5-liter, DOHC V6 powerplant producing 268-hp and 246 lb-ft of torque. The high-end Limited receives only the V6. Both engines feature dual variable valve timing with intelligence (VVT-i) and link to a 6-speed electronically controlled automatic transmission with intelligence (ECT-i) and a sequential (manual) shift mode. The 4-cylinder engine posts fuel economy numbers of 21/27 for front-wheel-drive trims and 20/28 for AWD trims, while the V6 manages numbers of 19/26 for front-wheel-drive trims and 18/25 with AWD trims.

While the 4-cylinder engine does an adequate job of moving the Venza along during daily driving, some testers note that it can struggle at times on inclines or during passing situations, especially when heavily loaded. Therefore, given the minimal difference in fuel economy numbers between the two engines, many reviewers recommend the V6, especially if owners plan to use the Venza to tow or carry large loads. While the 4-cylinder has a low tow rating of just 1,000 pounds, adding the Tow Prep package to V6 trims boosts towing capacity to 3,500 pounds, thanks to a heavy-duty alternator, radiator fan and engine oil cooler.

Toyota offers the Venza with an optional AWD system with Active Torque Control, which distributes power between the front and rear wheels depending on driving conditions to ensure optimal traction when accelerating or cornering.

Since it's based on the Camry's rather sedate platform, the Venza delivers a comfortable yet unexciting ride. Testers hoping for a sportier driving experience, especially on curvy roads, say they're a little disappointed with the Venza, which displays some body lean. On the plus side, the Venza handles more like a sedan than a big SUV, thanks to its lower center of gravity, and owners say it's easy to drive.

The Venza sits on a 4-wheel independent suspension with MacPherson struts and stabilizer bars in the front and rear. Electric power-assisted rack-and-pinion steering, which comes standard, feels light and adequately responsive, according to testers. However, reviewers say the brakes have a mushy pedal feel. They also find the Venza quite loud, with noise intruding from the engine and wheels. Noise levels are worse with the 4-cylinder than with the V6, critics say.

The LE and XLE trims ride on 19-inch alloy wheels, while the Limited gets 20-inch wheels. However, the large wheels and tires get mixed reviews. Some say they help improve ride and comfort, while others find them too big for the vehicle, resulting in a rougher ride and causing vibration and noise in the cabin. In addition, some owners note that the Venza's thick C-pillars severely hamper visibility to the rear.

Overall, owners and testers like the Venza's 5-passenger cabin, although some point out minor problems with interior fit and finish. Seats are spacious and comfortable for long trips, especially the second row, which offers plentiful room for 3 passengers. The driver's seat offers a good view of the road ahead, much like in an SUV, but the Venza has the advantage of low step-in and loading heights, making it easier for families to get themselves and their cargo into and out of the vehicle. Speaking of cargo, the Venza offers a roomy 30.7 cubic feet of rear storage space with the second-row seat in place. That expands to 70.2 cubic feet with the 60/40-split, fold-flat rear seats folded down.

On another positive note, the rear seats recline, providing additional comfort for passengers, and quickly fold down, thanks to one-touch fold-flat levers. An 8-way power-adjustable driver's seat with power lumbar support and a 4-way manually adjustable passenger seat with cloth upholstery come standard on the Venza LE trim, while the XLE and Limited add a 4-way power-adjustable passenger seat with power lumbar, plus leather upholstery and multistage heated front seats. An overhead console, front seatback pockets and a center console with a sliding armrest cover and dual storage compartments come standard on all Venzas.

The Venza was named a Top Safety Pick by the IISH, thanks to its top rating of Good for protecting passengers during frontal, side-impact and rear crash tests. The NHTSA, meanwhile, gave the Venza an overall rating of 4 out of 5 stars for its safety features, which breaks down to 3 out of 5 stars for protecting passengers during frontal crashes, 4 out of 5 for rollover crashes and 5 out of 5 for side-impact crashes.

Owners have a few minor issues with the Venza, but overall they give positive marks to the vehicle. Seat comfort, cabin versatility and overall reliability top the list of reasons owners like their Venzas. Many owners note that they test-drove competitors such as the Kia Sorrento and Ford Edge before choosing the Venza, in part because of its comfortable seats. The Venza's smooth, capable ride and good acceleration also attracts buyers, as well its decent fuel economy, given the vehicle's size. Owners also like the Venza's cabin, with some comparing it to a Lexus cabin in feel and quality of materials.

Some owners note that the Venza can deliver a bumpy ride at times over rough roads, and others would like to see better fuel economy. In addition, a number of owners question the Venza's overall value, given its sometimes high price. But for the most part owners are pleased with their purchases.

Users ranked 2012 Toyota Venza against other cars which they drove/owned. Each ranking was based on 9 categories. Here is the summary of top rankings.

Have you driven a 2012 Toyota Venza?
Rank This Car

Why Is The AWD Light And Check Engine Light On In My Car?

Why is the AWD light and check engine light on in my car?

My 2012 Toyota Venza is not starting after I had repaired the accident part..

The brake lights suddenly turned on while the car sat in the driveway, unmoved for over a day! The only way we could turn them off was by disconnecting the battery to avoid said battery from dying!

My speakers stop working after it rains... I notice too that when I open bs k passenger door after a good rain, water drains out of it. Are my speaker wires getting wet?