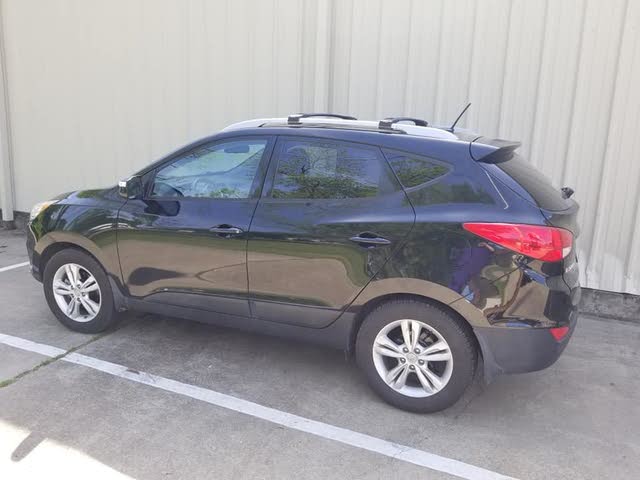 Less rear seat and cargo area than competitors, lackluster acceleration and some unseemly racket from both available 4-cylinder powerplants dim the 2012 Tucson's limelight just a bit, as do an overly stiff ride and poor rearward visibility.

Bottom line, the 2012 Tucson lineup totes the expected features and value, along with some decent performance numbers and slightly… very slightly… improved ride comfort. That Hyundai, however reluctantly, has outed itself regarding last-year’s misstated mileage numbers and has made the expected amends might give prospective owners just a bit more confidence in kicking a few Tucson tires. Be advised, however, that many rivals offer more room, power and refinement for a similar base price.

While some doubts may linger about Hyundai’s recent recanting of its touted mileage numbers for its 4-cylinder-equipped trims, the Korean automaker still puts out a darn good product. Take, for instance, its 2012 Tucson compact crossover ute. Swoopy and sleek, this 5-seat people-hauler is now advertised with real-world mileage estimates and still continues to impress with value and utility. Available all-wheel drive (AWD), a choice of two decently peppy 4-cylinder engines, and a welcoming, if not especially roomy cabin all contribute to this mini-ute’s family-friendly appeal.

Available in 5 progressively endowed trims, the base GL, the midlevel GLS, the eco-minded GLS PZEV (Partial Zero-Emissions Vehicle), and the flagship Limited, also with its green-leaning Limited PZEV sibling, this cute-ute offers a level of comfort and convenience for just about every medium-size family.

For 2012, the second-generation Tucson offers a few new wrinkles, including standard low-rolling-resistance tires and a driver-selectable Active Eco system for added fuel efficiency. Also, the GLS trims get the improved suspension and turn-signal-integrated mirrors that had been standard aboard only the top-shelf Limited editions, while all variations now scoot on a retuned suspension that is alleged to improve ride quality, at least marginally.

Now, before folks begin storming the nearest Hyundai showroom, some significant glitches must be noted. First of all, the latest version of this Korean crossover still has no turbocharged powerplants. And ride comfort, though alleged to be better (at least by Hyundai), still isn’t exactly plush, according to nearly all reviewers, and rear seats remain cramped for all but pint-size passengers. Finally, cargo area remains at 55.8 cubic feet with the rear seats folded, while cargo space to the upright second row seatbacks is a paltry 25.7 cubic feet, both figures well below those of rivals.

In that vein, Chevrolet’s Equinox, Honda’s totally redesigned CR-V and Toyota’s RAV4 all offer a larger crossover, with more standard features—including reclining and sliding second-row seats. And Volkswagen’s Tiguan as well as Mazda’s CX-7 each offer peppier powerplants, though each remains considerably pricier than the Tucson.

Standard power for the base 2012 Tucson GL is a variable-valve-timed (VVT) 2.0-liter inline 4-cylinder (I4) engine that’s good for 165 hp at 6,200 rpm. A 5-speed manual transmission manages 146 lb-ft of torque at 4,600 rpm, while an available 6-speed shiftable automatic transmission makes things easier, if not exactly sporty. Meantime, look for revised mileage estimates of 20 mpg city/26 highway with the stick shift, and 22/29 with the automatic, while towing is maxed out at 2,000 pounds with the proper equipment installed. This base trim, by the way, is available only in the standard front-wheel-drive (FWD) configuration.

GLS and Limited Tucson trims, meantime, tote a VVT 2.4-liter I4 powerplant and pack only the 6-speed shiftable automatic transmission. Non-PZRV trims put out 176 hp at 6,000 hp and 168 lb-ft of torque at 4,000 rpm, while PZEV trims, tweaked to pass rigid California emissions standards, throw down 170 hp and 163 lb-ft of torque, each at the same revs. Towing, meantime, is still pegged at 2,000 pounds with the optional trailer hitch selected. Mileage estimates for this peppier I4 run 21/30 in standard front-wheel-drive trims.

Both the higher trims can be equipped with available AWD that boasts normal cruising in standard front-wheel drive (FWD) and automatic 50/50 diversion of torque to both front and rear axles in slippery conditions. A selectable mode also allows drivers to lock the Tucson in AWD on any pavement, slippery or dry. Selecting available AWD, meanwhile, means mileage in this four-banger drops to an estimated 20/27.

Tests of a 2012 Tucson GLS AWD saw it plodding from 0-60 in 9.6 seconds, just a bit slower than the class average. Reviewers, meantime, find the 2.0-liter I4 adequate enough around town, but note that it struggles a bit in hill country, as well as in passing and merging duties on the highway. The peppier 2.4-liter four-banger, on the other hand, accelerates nicely from a stop, but a few reviewers describe power declining at midrange speeds, with hill-laden terrain again presenting a challenge. A less-than-firm feel to the gas pedal is also noted in at least one review.

Most reviewers find the 5-speed automatic to deliver crisp and timely shifts, while at least a few note that the 5-speed stick shift delivered in the base GL will, if nothing else, make for a somewhat sportier drive. Finally, neither engine is found to be especially quiet or refined under heavy acceleration, though nearly all reviewers concede that each quiets noticeably at highway speeds.

Again for 2012, the Tucson lineup rides atop a 4-wheel independent suspension that boasts MacPherson front struts, a multi-link rear end, and front and rear stabilizer bars. Hyundai touts a few marginal tweaks to all Tucson suspension systems, easing, at least a little, what had been a frustratingly harsh ride. However, many reviewers find ride comfort still noticeably below that of most competitors.

Additionally, the midlevel GLS is now delivered with an upgraded suspension that had been found on only the top-shelf Limited trims, and with its standard 17-inch wheels, offers a marginally smoother ride than last year’s version. The base GL, also with standard 17-inch wheels will, of course, ride exponentially better than the Limited trim with its outsize 18-inch wheels and tires, according to reviewers, but overall, this compact crossover still has a ways to go to even approach posh. Meantime, reviewers note the low rolling-resistance tires, new this year, as doing little to ease things, comfort-wise.

The Tucson’s electric power steering, meanwhile, is in the opinion of most reviewers far superior to that of many rivals. However, body lean in even moderate cornering is still frustratingly evident, and a number of reviews also note that low-speed steering effort remains heavy, though responsiveness improves markedly at higher speeds.

Finally, brakes in this mini-ute remain respectably strong, with one test finding it coming to a stop from 60 mph in 123 feet, touted as about average for the class. Several reviews additionally note that the Tucson again sports standard, driver-selectable Downhill Brake Control that can be used to maintain a reasonable speed during the descent of steep grades.

This year’s edition of the entry-level Tucson GL trim carries standard 17-inch steel wheels, a rear spoiler and power-adjustable mirrors outside, with cloth upholstery, a height-adjustable driver’s seat and simulated alloy cabin accents adorning the inside. Such convenience offerings as remote power door locks, tilt-wheel steering and a trip computer are all embraced by manually adjustable air conditioning, while entertainment is again provided by a 160-watt system that boasts an MP3-capable single-CD player, 6 speakers, satellite radio and auxiliary iPod input.

Options for all trims include remote engine start, roof-rail crossbars, carpeted floor and cargo mats, splashguards and a tow hitch. The flagship Limited and Limited PZEV trims, meanwhile, can be delivered with the available Premium Package boasting a power sunroof, a voice-activated navigation suite with a 6.5-inch touchscreen and a premium 360-watt audio system with 7 speakers.

Reviewers are generally impressed with this crossover’s welcoming, if somewhat downsized cabin. Controls are noted by most to be handy and well-labeled, while the available navigation suite interferes little with audio function and remains easy to use. Comfort in front is lauded by reviewers, but rear-seat comfort is not so well-received. The smallish cargo area is also panned by reviewers as less than that found in most rivals. Finally, thick roof pillars in back will, according to virtually all reviewers, challenge sightlines to the rear.

In awarding Hyundai’s swoopy crossover it’s Top Safety Pick for 2012, the Insurance Institute for Highway Safety (IIHS) endowed the Tucson with its best score of Good in all testing criteria.

While several of those who own a 2012 Tucson claim to be satisfied with this compact ute’s mileage numbers, there are those who argue that those revised numbers still reflect only a journey with a driver and no passengers—and no cargo, either. Owners also grouse that this petite people-hauler could use a few more ponies in both I4 engines, while others bemoan its cramped rear seating and undersized cargo space. Meanwhile, a number of owners report that ride comfort, though improved slightly, could still be a lot better.

On the positive side, the Tucson’s svelte and swingy profile is a decided turn-on for several owners, while virtually all owners laud this cute-ute’s available AWD capabilities, as well as its decently comfortable seats and its tolerably capable handling attributes (with the 18-inch wheels). Finally, the plethora of standard techno-goodies found in the higher trims, most fairly simple and straightforward to understand and operate, also garners praise from most owners.

What's your take on the 2012 Hyundai Tucson?

sandy457 Our all wheel drive light continues to come on and Hundai is NOT responsive to us. Lies about sending us letters, promises to call, never returns our call. Refuses to fix the problem. They even ordered a new pump and then refused to put it on. We have filed the lemon law.

Users ranked 2012 Hyundai Tucson against other cars which they drove/owned. Each ranking was based on 9 categories. Here is the summary of top rankings.

Have you driven a 2012 Hyundai Tucson?
Rank This Car

I have existing photos of my vehicle on my how do I up load them? Your photo wizard will not allow that.

2012 hyundai tucson 91K well maintained, AWD light comes on intermittently. had it checked out at a hyundai dealer and they say need to replace coupler, seal and harness , expensive. I live in To...

368 views with 2 answers (last answer about a year ago)

214 views with 3 answers (last answer about a year ago)

Could Replacing An Oil Pan Cause An Oil Pump To Fail?

We took my car into the Hyundai dealership to get some recall work done- change oil pan. When I drove it home, my oil light was flickering. The paperwork indicated the mechanic had noticed the lig...