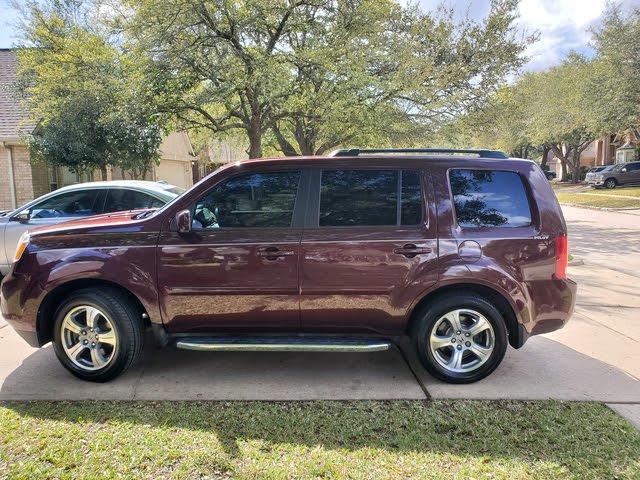 Despite the updates, the 2012 Pilot's exterior styling still manages to look bland, and the brakes continue to feel soft, resulting in long braking distances.

The Pilot puts on a new face for 2012, and the effort results in a good-looking vehicle from the front. However, from the sides the Pilot still displays a profile that's more appropriate for the 1990s than 2012. On the plus side, the Pilot delivers a capable ride, good handling, good fuel economy (for an SUV) and a full range of features, as well as four well-equipped trim levels. There may be better SUVs on the market today, but the Pilot offers a good all-around package for families who need a functional vehicle with three rows of seats.

Now in the middle of its second generation, the Honda Pilot crossover SUV seats up to 8 passengers in 3 rows, and offers plentiful cargo space, as well as available 4-wheel drive. It comes in base LX, EX, EX-L and Touring trim levels for 2012.

Exterior updates for the 2012 Pilot include a new front fascia with a three-bar chrome-style grille, replacing the previous year's six-sided grille. Honda also redesigned the Pilot's headlights and front turn signals, and reshaped the front air dam and bumper to improve aerodynamics, which helps boost fuel economy, according to the automaker. In addition, Honda upgraded the audio systems in the EX and EX-L trims, and all Pilot trims above the LX receive new wheel designs for 2012.

The rest of the Pilot's exterior retains its clean, unadorned look, with minimal lines and rounded corners. Although the exterior design works functionally and aerodynamically, some reviewers find it an unexciting, truck-like look, especially when compared to the sweeping, cutting-edge exterior styling showing up in competitive vehicles like the Buick Enclave, Ford Edge, Kia Sorrento and Nissan Murano. Any further exterior reshaping will have to wait for the Pilot's expected next-generation redesign around 2014. Still, the Pilot continues to exude the rugged, firmly planted, no-nonsense demeanor of a solid SUV and capable family hauler.

As a result of the front-end updates, the Pilot's overall length increases by half an inch to 191.4 inches. Ground clearance remains essentially the same at 7.97 inches, down slightly from 8 inches for the previous version.

Honda continues to equip all Honda Pilot trims with a stalwart 3.5-liter V6 engine, which has powered the SUV in one form or another since its debut. The V6 generates 250 hp and 253 lb-ft of torque, and features a Variable Cylinder Management (VCM) system, which deactivates up to 3 cylinders when they're not needed in an effort to conserve fuel. Coupled with the exterior aerodynamics updating, VCM helps boost the V6's fuel economy numbers slightly for 2012 to 18/25 mpg for front-wheel-drive trims and 17/24 for trims equipped with optional 4-wheel drive. Those numbers are an improvement over the previous year's 17/23 and 16/22 mpg, respectively, and put the Pilot near the top of its class for fuel economy. The V6 runs on regular fuel.

The Pilot's powertrain also includes a 5-speed automatic transmission with Grade Logic Control, which helps maintain the proper gear when ascending or descending hills. However, some reviewers have noted that the 5-speed automatic is becoming a little dated in this era of more efficient 6-speed transmissions.

The V6, like the Pilot itself, delivers solid performance, but it's also somewhat unexciting. The Pilot accelerates smoothly and operates quietly, and the SUV rarely feels underpowered, even when fully loaded or when towing. The Pilot has a towing capacity of 4,500 pounds for 4-wheel-drive trims. That's average for the field, but some competitive SUVs, such as the Chevy Traverse (5,200 pounds), the Audi Q7 (5,500 pounds), and the GMC Acadia (5,200 pounds), beat the Pilot in this category.

Owners who require optimal traction and stability can outfit the Pilot with an optional Variable Torque Management 4-wheel-drive system (VTM-4), available at all trim levels. The system operates automatically, although drivers can manually lock the rear differential for driving in low-traction conditions. The system will stay manually locked at speeds up to 18 mph.

Despite its high center of gravity, the Pilot delivers a stable ride, though several testers have noted some body lean in corners. The Pilot sits on a fully independent suspension, with MacPherson struts in the front and a multi-link configuration with trailing arms in the rear. Although some testers found the ride a little too soft, most say it's well-balanced and car-like, despite the Pilot's truck-like nature.

To help improve the ride even more, Honda upgraded wheel sizes for 2012, to 17-inch wheels for the LX trim and 18-inch alloy wheels on all other trims. In addition, the rear suspension sub-frame mounts were re-tuned for 2012 to help reduce noise levels in the cabin.

The Pilot's variable power-assisted rack-and-pinion steering system provides good feedback, especially at lower speeds, and a tight turning diameter of 37.9 feet helps improve maneuverability and handling as well. One negative point remains the Pilot's braking system. Power-assisted ventilated front disc brakes and solid rear disc brakes come standard on the Pilot, but some testers found pedal feel too soft, and note that the Pilot has a long stopping distance. They also express concerns about the brakes' effectiveness during panic stops. 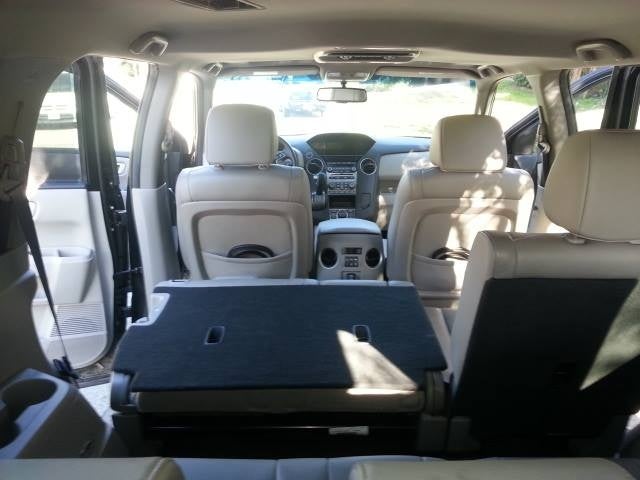 Inside the Pilot's cabin, changes were kept to a minimum for 2012, but the addition of a noise-dampening windshield makes for a quieter ride. Some dash controls have been replaced with dials, resulting in a clean, well-thought-out instrument panel. Instrument backlighting for night-time driving was also changed by replacing the bright aqua-blue used in previous years with a soft white look, which helps improve contrast and readability. The Pilot still has a peculiar dash-mounted shift lever, but it's reported to be easy to use and doesn’t get in the way.

For 2012, EX-L trims receive a new intelligent multi-information display (i-MID) with an LCD screen, which drivers can manage using steering-wheel-mounted controls. The i-MID provides easy access to all of the Pilot's systems, including the audio and climate control systems, rear-view camera and fuel economy information. The Pilot's navigation system, which is optional on the EX-L and standard on the Touring trim, also gets an update. It now includes 60GB of system memory and voice recognition for three languages, as well as a new FM Traffic feature, which provides free updates on traffic, helping drivers avoid gridlock. The navigation system also comes with an upgraded multi-view rear camera with wide, normal and top-down views, displayed on the navigation screen.

All Honda Pilots come well-equipped with such standard features as front and rear air conditioning, power windows and door locks, cruise control and a tilt/telescopic steering wheel with illuminated steering-wheel-mounted controls. All trims also include a second-row bench seat that slides, reclines, splits 60/40 and folds flat, and a third-row 60/40-split, flat-folding bench seat. In addition, a 7-speaker, 229-watt AM/FM/CD system with MP3 capability, speed-sensitive volume control and a subwoofer comes standard on the LX, EX, and EX-L trims.

The EX trim adds tri-zone climate control, Bluetooth, a 10-way power-adjustable driver's seat, a compass and a 2GB CD library for the audio system, while the EX-L also includes leather upholstery, heated front seats, a leather-wrapped steering wheel, a 4-way power-adjustable passenger seat, a power moonroof, a power liftgate, an auto-dimming rearview mirror and a USB input jack for the audio system. In addition, when navigation is added to the EX-L, the audio system upgrades to a 246-watt unit. At the top of the heap, the Pilot Touring maxes out the features with such amenities as navigation, a DVD rear entertainment system and a 10-speaker, 650-watt audio system.

Thanks to its size, the Pilot provides plenty of cargo space, as well as numerous storage spaces throughout the cabin. With all three seats up and in place, rear cargo space measures 18 cubic feet, which increases to 47.7 cubic feet with the third row folded down, and 87 cubic feet with both back rows folded down. The fold-flat second- and third-row seats make it easy to load large items in the cargo area.

The Honda Pilot gets mixed reviews from owners. Many like its size, functionality and smooth ride. The three rows of seats provide plenty of room for families and their gear, and the optional 4-wheel drive adds stability for those owners who regularly drive in inclement weather. Owners generally find the cabin and seats comfortable, though several note that the seats can become uncomfortable on long road trips. Acceleration is smooth, and many owners have commented on the quiet cabin, especially at highway speeds.

However, a number of owners have noted build-quality problems with the Pilot, which frustrates many who have counted on Honda's reliability. Several owners have noted humming noises from the engine or strange shudders when the engine VCM system activates or deactivates cylinders. Other owners have noted problems with the brakes, ignition, moonroof and tires. Generally, owners say they're getting good fuel economy from their vehicles, but some say their Pilots are coming up short in that category. On the plus side, many owners like the fact that the Pilot uses regular fuel rather than the premium fuel required by some competitive vehicles.

Hintertux The bump out from the shifter hits my knee cap... Bad design if you ask me since I have a 32 inseam which is average in the American populace.

Guru9W8DK Do they have an aftermarket shifter to replace the shifter bump? I have the same problem.

Have you driven a 2012 Honda Pilot?
Rank This Car

Just recently when I’m driving all of the dashboard lights and the radio in the consul lights start flickering out of sequence. The car still seems to be drivable. But this is happened now twice. Re...

Were Is The Petcock Located On 2012 Pilot

were is the petcock to flush the coolent on a 2012 pilot.

39 views with 6 answers (last answer about a year ago)

Where Is The Fuel Filter On A 2012 Honda Pilot