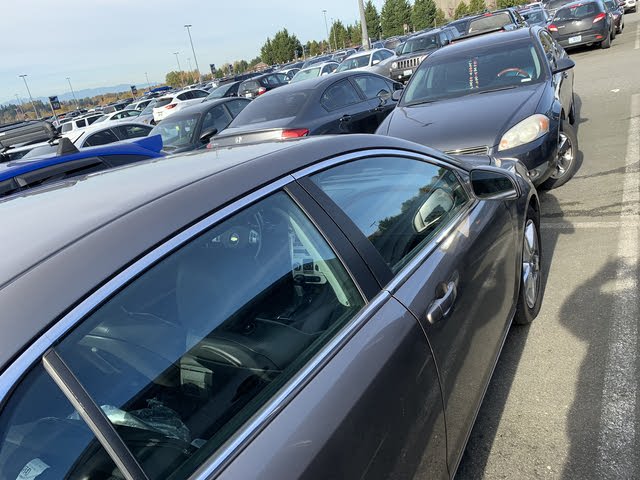 The 2012 Chevrolet Malibu offers stout engines, a wealth of space and confidence-inspiring brakes in a tried-and-true package.

The Chevy Malibu is being redesigned for 2013, making the 2012 just a bit boring (and under-equipped).

Two solid engines with reasonable power and efficiency, a roomy interior and trunk, and a solid construction that provides a smooth and predictable ride add up to a hell of a good—if unremarkable—car in the 2012 Chevrolet Malibu. The problem is it’s going to be even better next year, so this year is a good one to miss. Unless you’re in love with the current styling and looking to score a major deal, wait until 2013.

Nothing changed, and everything changed. Back in 2008, the Malibu was the darling of the automotive press, or at least the midsize sedan equivalent. After taking home the awards, though, the Malibu seemed to stagnate. Four years is three too many for resting on your laurels and more than enough time for the competition to wake up.

So here we are in 2012, one year prior to a new Malibu. The competition has had their coffee and have been packing on the features and more than one redesign. No, nothing much has changed with the Malibu lately, but the automotive world has changed around it. What used to be Car of the Year material is now solidly middle of the pack, even with two new option packages that barely keep it treading widget water.

It’s not that the engine offerings for the Malibu are weak, they’re just a bit old. With a base 2.4-liter 4-cylinder that musters only 169 hp for a 22 mpg city/33 highway return or a 3.6-liter, 252-hp V6 that’ll get you 17/26 mpg, there’s just not a lot to impress. Even with a 6-speed transmission, it’s just a solid lineup. They could both be a little more economical, and everyone likes more power, but the numbers slot the Malibu firmly amongst its competitors, neither falling behind nor leading the pack. The engines behave in much the same way, although some testers surprisingly feel the 2.4 is the more impressive of the two, with smooth operation and a bit of benefit at the pump. After all, you’re not taking your midsize sedan racing. That said, a smaller and more efficient 4-cylinder with a turbo would be a lovely compromise.

Stay away from the LTZ’s 18-inch wheels unless you’re a slave to style. They make things far too harsh without adding any actual handling benefit. No, the 17-inch wheels on the LS and LT are your best bet here, as they do nothing to compromise the soft stance of the Malibu—perfect for around town and long-distance, but without wallowing all over itself at the sight of the first corner.

This is another segment where the 4-cylinder wins out over the V6, which can exhibit alarming torque steer and some aggressive wheelspin even on dry surfaces—odd for a front-wheel-drive car, even one with 252 hp.

Thankfully, the Malibu doesn’t seem to suffer from the same comfort woes as the Impala, with a firm and supportive front seat that should be a problem only for the particularly portly. The rear seat is softer, but not so much that it should hamper travel.

It’s funny how if you stick with a design long enough it comes back into fashion. That certainly isn’t the case here, but the interior layout and gauge design is so stale some reviewers are actually referring to it as “refreshingly simple.” Maybe that’s just a case of “if you can’t say something nice…” but don’t expect any surprises with the Malibu. This is pure late-'90s spectacular.

Some interior materials will disappoint, highlighted by their being surrounded by more appropriate fare. Watch rear visibility in the quarters, as thick D pillars can block line of sight.

The 2012 Malibu comes with the standard safety package of assisted 4-wheel antilock disc brakes, stability and traction control, 6 standard airbags and daytime running lights. It is an Insurance Institute for Highway Safety (IIHS) Top Safety Pick and received 4 out of 5 stars from the National Highway Traffic Safety Administration (NHTSA).

Malibu owners are pleased with all the same things that impressed reviewers back in 2008—they are just slightly less impressive. Both engines offer good power and reasonable efficiency, and the suspension is a liveable blend of silk and steel. Large seats, easy openings and plenty of room for heads and legs mark a point of pleasure for owners, as well as a spacious trunk.

What's your take on the 2012 Chevrolet Malibu?

Users ranked 2012 Chevrolet Malibu against other cars which they drove/owned. Each ranking was based on 9 categories. Here is the summary of top rankings.

Have you driven a 2012 Chevrolet Malibu?
Rank This Car

I have a key to my car but so does someone else that shouldn't! What is the best option to avoid getting my car stolen? And will it be pricey I just payed 3600 to fix it and really can't afford much...

I have a 2012 Chevy Malibu. In June of 2016, the car would occasionally struggle to idle, but would always start and run fine otherwise. In August, the vehicle started having issues cranking. It th...

how do I open and respond to inquiries from potential buyers. They show up in my inbox, but I cannot open message or reply

I have a 2012 Chevy Malibu the biggest POS ever besides that the check engine light it's still on after I change the camshaft sensors any advice??

Car Starting By Itself