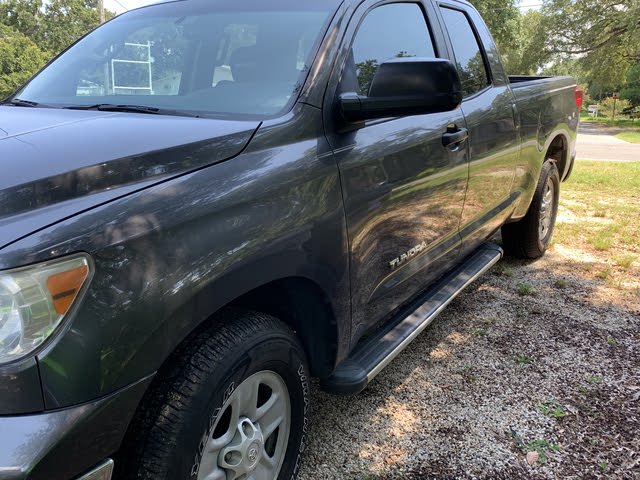 The 2011 Toyota Tundra may not be able to boast of the kind of makeovers some of its rivals in the large pickup market have received in recent years, but the automaker continues to tweak the always-tough Tundra enough to allow it to maintain its status as a player in the field. Known for its roomy cabins and generally nice rides, the Tundra has long been appreciated as a powerful and rugged rig as well, and it scores points as a solid, well-built and practical all-around truck.

Improvements to the base engine of the 2011 Toyota Tundra continue an upgrading of the truck’s powertrains. Last year, the Tundra’s V8 engine got the attention. This time around, the base V6 had its turn, and the new version of the 4.0-liter V6 gets dual variable timing and produces 270 horsepower and 278 lb-ft of torque. That may not satisfy those who feel they simply cannot muscle their pickup around adequately with anything less than a V8, but it will be enough for others and should get 16 mpg city/20 highway.

Even though Toyota cut down some of its Tundra options for this year, those looking for more power can choose from a couple of other engine options. They’re part of a Tundra lineup that allows for a mixing and matching of engines, cabs and beds that gives prospective buyers a wide variety of ways to set up their vehicle.

The next step up the engine ladder is the 4.6-liter V8 that received its power boost a year ago to 310 hp and 327 lb-ft of torque. Those numbers pale alongside those of the 5.7-liter V8 with 381 hp and 401 lb-ft of torque, which is by far the number-one engine choice for Tundra buyers. Equipped properly, 2011 Toyota Tundras with that setup have a towing capacity of 10,800 pounds.

The 2011 Toyota Tundra offers a choice of three cabs – Regular, Double Cab or CrewMax – for most trims, and all get high marks from reviewers for roominess, though not so much for quality of materials. The Regular Cab is the down-to-basics work truck of the family. The Double Cab has traditional front-hinged doors, which make access to the rear easier than that of most of its rivals and also adds keyless entry and power accessories. The CrewMax has all kinds of legroom as well as a reclining seatback.

A few Toyota Racing Development (TRD) packages are available for the 2011 Tundra, including a Sport package designed for the street, Rock Warrior package with off-road tires and an Off-Road setup that comes with skid plates and front tow hooks.

The Tundra still offers a decent ride, but experts find the quality of that ride has slipped a little in recent years in comparison to others, as rivals like the Dodge Ram and Ford F-150 have upgraded and moved forward. In particular, they feel the Tundra is a bit cumbersome and feels large, making maneuverability an issue at times.

The 2011 Toyota Tundra scores well in crash tests and is equipped with a couple of new features in trailer sway control and brake override technology. It also comes with antilock brakes, front side airbags, curtain side airbags, front knee bags and stability and traction control.

Users ranked 2011 Toyota Tundra against other cars which they drove/owned. Each ranking was based on 9 categories. Here is the summary of top rankings.

Have you driven a 2011 Toyota Tundra?
Rank This Car

While driving one day my Traction Control, VCS Off, and Check Engine lights turned on. When I was driving the truck it wouldn't downshift to accelerate. I drive a 2011 with approximately 75k miles. I ...

2011 Toyota Tundra Crew Max Dashlight And What They Could Mean

Have a 2011 Toyota Tundra Crew Max. Turned it on and the engine light and traction light come on and the 4LOW light is flashing. What could it be?

2011 Toyota Tundra, No Crank No Start

After driving home from work and from home to a gas station, truck won't crank or start. It acts as if it's in neautral or drive. No clicks. No fuses blown. I have remove the battery and cleaned po...

I have 3 dashboard lights on, slip indicator, check engine and the 4lo is flashing. Anyone know why?

Check Engin Light,, Anti-skid Light And 4low Light Blinking.. Why Are These...

All these lights came on at once.. Check engine light, anti-skid light and the 4low light is blinking. What does this mean?