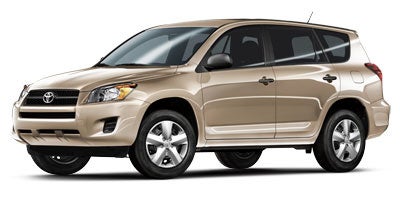 The 2011 Toyota RAV4 is a spacious, capable crossover SUV that can be optioned to suit nearly any taste.

Ubiquitous styling and an overall lack of excitement mean the 2011 RAV4 is a practical, rather than emotional, choice.

Buyers of small crossover SUVs aren't starved for choice, and Toyota's RAV4 is one of the most popular ones, having set the pace in this segment since its last redesign in 2006. The 2011 RAV4's strengths are its capacious, versatile interior and excellent road manners. Good fuel economy and low maintenance costs make the 2011 RAV4 a value-laden standout.

Offered in Base, Sport, and Limited trim levels, the 2011 Toyota RAV4 is a car-based crossover SUV that comes with either four- or six-cylinder power. Both front- and four-wheel-drive RAV4s are offered, as is a healthy complement of standard equipment.

All 2011 RAV4s ride on a unit-body platform that's loosely based on the top-selling Corolla. U.S. models stretch 104 inches between the wheels and are 71.5 inches wide. The RAV4's generous dimensions place it toward the larger end of the compact SUV class and enable some versions to seat seven passengers, albeit rather uncomfortably.

Four-cylinder power is standard across the 2011 RAV4 line. Displacing a substantial 2.5 liters, the all-aluminum, 16-valve inline four makes 179 hp and 172 lb-ft of torque. Though slightly handicapped by their old-tech four-speed automatic transmissions, four-cylinder RAV4s accelerate off the line confidently and make short work of highway passing.

Optional in all RAV4 trim levels is Toyota's 3.5-liter V6 engine. With 269 hp and 246 lb-ft of torque, the V6 generates substantially more power than the inline four and makes the RAV4 among the quickest small SUVs available. V6 RAV4s get a much-improved five-speed automatic gearbox with a wider ratio spread that improves both power and fuel economy.

All RAV4s give buyers the option of front- or four-wheel-drive. Front-wheel-drive versions should appeal to buyers who live in warmer climates and can take advantage of the more basic drivetrain's better fuel economy. Four-wheel-drive RAV4s use an electronic on-demand system to deliver traction to the rear wheels in the event of slippage.

With its Corolla-derived chassis and a four-wheel-independent suspension, the 2011 RAV4 essentially performs like a tall car. Body motions are relatively well-controlled, and the electric power steering, while almost totally devoid of feel, is quick and accurate. Sport RAV4s get firmer shocks and springs that further tamp down body roll. While no one will confuse the 2011 RAV4 with a sports car, it performs predictably in almost any situation.

Base 2011 RAV4s ride on 16-inch wheels with 70-series tires. The tall tire sidewalls and soft-riding suspension make for an excellent ride on broken pavement. Optional 17-inch wheels provide steering response that is a touch quicker and impart only a trace of harshness to the ride. RAV4 Sport trims get 18-inch alloys shod with low-profile 55-series rubber. The more aggressive rolling stock makes the RAV4 Sport ride a bit harshly, though the upside is more responsive handling. All RAV4s feature four-wheel disc brakes, vented in front, with standard ABS control.

Class-leading space has been a large part of the RAV4's success. Seating for seven is not a common feature among small SUVs, yet the 2011 RAV4 offers it as an option on all three trim levels. While those relegated to the third row will find legroom lacking, the additional versatility provided by the extra seat is a point in the RAV4's favor for many buyers, even though it limits trunk capacity to 12.3 cubic feet. Without the third seat the 2011 RAV4 offers a more generous 36.4 cubic feet of cargo volume.

The 2011 RAV4's interior, unlike the exterior, features a dose of adventurous styling flair. The dashboard's double-level design and prominent center stack are both ergonomically correct and pleasing to the eye. The chair-like seating position gives the expansive view SUV buyers seek, and the front buckets are firmly bolstered. While the dashboard plastics are a bit unyielding, the fit is excellent and rattle-free.

Base RAV4s get a healthy dose of comfort and convenience features. Power windows and locks are standard, as are remote keyless entry, cruise control, a CD stereo, and ten cupholders. Stepping up to the midlevel Sport trim equips the 2011 RAV4 with foglamps, tinted glass, and color-keyed door and fender trim. The range-topping RAV4 Limited gets a leather-wrapped steering wheel, a 6-CD changer, a cargo cover and keyless push-button start. The Limited trim offers GPS navigation and power leather seats as options.

Safety is a big selling point in the crossover SUV market. Realizing this, Toyota has equipped the 2011 RAV4 with standard electronic stability control and electronic brakeforce distribution. Front, side, and curtain airbags are standard, as are whiplash-reducing active headrests. In government crash testing the RAV4 earned five stars for driver protection and four stars for front passenger protection. Side impact testing resulted in the RAV4 being awarded five stars for the front and rear.

RAV4 owners are, in general, very happy with their vehicles. The peppy four-cylinder engine is deemed more than adequate, but the V6 really impresses owners with its responsive power. Consumers also enjoy the RAV4's thrifty fuel economy and low ownership costs. Some owners complain about the cheap dashboard plastics, and more than one RAV4 driver wishes a manual transmission were offered.

Laurie I've had 2 previous Rav4's lasting a span of 22 years. I live in Maine and love how dependable they are to drive during snow. Really.

Users ranked 2011 Toyota RAV4 against other cars which they drove/owned. Each ranking was based on 9 categories. Here is the summary of top rankings.

RAV4 About The Three Lights Which Are On Dash

Question about the three light coming on the dash ie: engine check, 4x4 check and traction control lit, has anyone found out why they appear

9 views with no answers yet
10

Is It Worth Doing Body Repairs Before Selling?

Warning Light - What Does It Mean

2011 Toyota RAV4 The picture of the blinking light looks like a car driving down hill on a triangle, it is green. It blinks when I am in park and goes solid when I put it in gear. My local Toyota se...