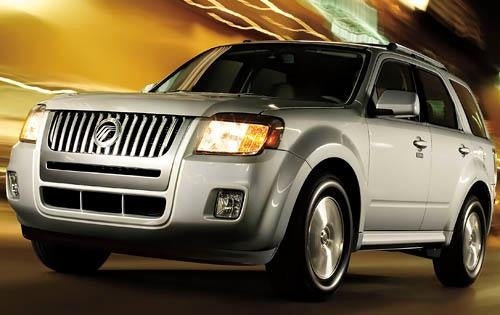 Many will miss the Mercury Mariner, a classy-looking SUV inside and out that got decent gas mileage to boot, when Ford puts the wraps on the whole Mercury brand after the 2011 model year.

The 2011 Mercury Mariner will go out with a reputation much like that of its forerunners: It’s a nice-enough SUV, but one with a stiff and tight area for backseat passengers and overall a vehicle that serves its purpose but doesn’t particularly shine.

Ford offered the Mercury Mariner for the most part as a fancied-up Ford Escape and no doubt hopes Mariner-lovers will switch their allegiances to the Escape. Before they do, though, true Mariner-backers may be looking to land deals on 2011 models to help them ease into life without their Mercurys. Either way, the 2011 Mariner will help bring down the curtain on the family name.

The Mercury Mariner gets one last go-round, one final opportunity to go up against its close cousins, the Ford Escape and Mazda Tribute, in 2011. Ford plans to discontinue the Mercury brand after the 2011 model year, so this is it for the Mariner and the rest of the family.

Ford has made some fairly significant updates to the Mercury Mariner in recent years, both in appearance and performance-related areas, to help it compete in the market.

That the 2011 Mercury Mariner marks the end of an era may be a boon to the vehicle, too. One of the complaints with the Mariner through the years has been that it's on the pricey side for what it delivers. Chances are, with the line nearing extinction, Mercury dealers will be willing to offer up good deals on the cars. Ford dealers will continue to work on Mercury products, so service and parts should not be a concern.

The 2011 Mercury Mariner again comes in Base and Premier trims, and either is available with front-wheel drive (FWD) or four-wheel drive (4WD).

The 2011 Mercury Mariner comes standard with a 2.5-liter Duratec inline four-cylinder engine that produces 171 horsepower and 171 lb-ft of torque. Buyers looking for a little more oomph can choose to bump up to an optional 3.0-liter V6 and get 240 hp and 223 lb-ft of torque.

Both engines team with a smooth six-speed automatic transmission. The four-cylinder models deliver 20 mpg city/28 highway with FWD and 19/25 with 4WD. V6 versions get 18/26 with FWD and 17/24 with 4WD.

The 2011 Mercury Mariner receives passing grades, but not a whole lot higher, for its ride and handling, and it does offer a smooth trip over even pavement. Powertrain improvements a couple of years ago boosted the power some, and the V6 especially provides a fair amount of get-up. Some reviewers don’t like the electronic power steering that was brought in at the same time.

While the Mariner does not generally get marked way down in these departments, it doesn’t pick up rave reviews or get cited as a car that stands out or is especially sporty or fun to drive, either. Reviews tend to be mixed when it comes to road noise: Some reviewers note that it is relatively quiet on the highway; others find it loud.

Reviewers tend to agree on one aspect of the 2011 Mercury Mariner: They are not fans of the rear drum brakes, which result in less-than-impressive braking performance.

Experts appreciate the classy and functional interior of the 2011 Mercury Mariner. Many like the quality of the materials in the cabin and its large center console.

But they have some concerns with the cabin, especially for those in the rear. It gets a little tight back there and can be uncomfortable over the long haul.

Some reviewers feel the front seats are too upright. A rear seat that is very flat and cannot be adjusted gets brought up in reviews as well. The Mariner has 29 cubic feet of cargo space with the rear set up and 66 feet when it is folded down. The problem there, reviewers note, is that it can be a pain to get the seat folded flat.

The Base trim of the 2011 Mercury Mariner features a four-speaker CD stereo with auxiliary audio jack and satellite radio, a leather-wrapped steering wheel and privacy glass. The Premier trim offers heated front seats, leather upholstery and a six-speaker audio system. A moonroof is available with either trim.

The 2011 Mercury Mariner pulled top scores in front and side crash tests conducted by both the government and the Insurance Institute for Highway Safety. Traction and stability control and front, side and curtain airbags all come standard, along with side-intrusion door beams.

Ford sets the Mercury up with the MyKey security system, which parents can use to restrict the Mariner’s top speed and its stereo volume for their young drivers.

The 2011 Mercury Mariner draws mostly positive comments from owners, who are impressed with its looks and fuel economy along with other aspects of the vehicle. Even the 4-cylinder version, they say, has plenty of power.

They appear to be split over the ride offered by the Mariner. Some note that it makes for a comfortable ride and call it car-like, while others feel it is a bit rough and truck-like. It’s been labeled fun to drive by owners, too.

Owners boast about trucking through snowstorms and taking off on long trips with the Mariner and how it holds up in both cases and keeps driving like new. Mariner fans rave about all that and moan that this is the end of the line for their favorite vehicle.

What's your take on the 2011 Mercury Mariner?

L00N Best car I ever owned! I feel like it fits me like a glove. Manuverability is unbelievable. I had a ford F150 that I cursed every time I had to turn around or park in a small spot. Nice truck but not for me. I love my Mercury Mariner. And fantastic in snow!

dinoj57 My wife was just involved in an accident with her 2011 Mariner we bought new. She is totally disappointed they are going to total it. Damage looks repairable with only front fenders, hood, nose and radiator support. She walked away with just some bruises, the Honda she hit was totally destroyed and she was only doing about 30 mph. It only had 27k miles and we won't me able to replace it. She loved the way in handled, how well she could see out, the dependability, it was the 4cly model and she felt comfortable with the power....not a bad thing she could say about it.

Have you driven a 2011 Mercury Mariner?
Rank This Car

Where Is The Power Steering Fill Tube On 2011 Mariner

Where is fill tube for power steering fluid

207 views with 2 answers (last answer about a week ago)

We Have An SUV With A Towing Capacity Of 3500 Lbs And Want To Tow A Trailer...

We will be packing anything unusually heavy. We have a class 3 hitch and have been told that up-grading to a class 4 hitch will increase the capacity to 5000 lbs. Is this true?