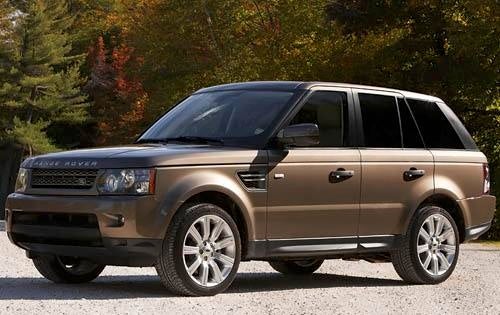 If the 2011 Land Rover Range Rover had a few less plates of bangers and mash, it would be the 2011 Range Rover Sport, which is a bit smaller and a bit more maneuverable, while still maintaining much of the same image as its larger brother.

The looks of the 2011 Range Rover Sport are designed to differentiate it from the Range Rover, and include 20-inch, 15-spoke alloy wheels, a more aggressive front fascia, and new LED turn signals. The wheels are wrapped in low-profile tires as well.

Moving to the inside, all trims include a standard DVD navigation system, a 5-inch touchscreen display for the instruments, an optional DVD changer in the rear, and satellite radio. The rear seats afford visibility similar to the front seats in most other SUVs, thanks to stadium-like seating similar to that found in movie theaters. The display in the dashboard has also led to a cleaned-up dashboard that reduces the number of buttons for the driver or front seat passenger to manage.

The 2011 Range Rover Sport carries similar safety features to other Land Rover SUVs, including antilock brakes, side impact and side curtain airbags for front seat occupants, and front and rear parking sensors. Prospective buyers can opt for adaptive cruise control that bases speed on a sensor reading of other cars on the road. Since it rides higher than other SUVs, rollover mitigation technology is standard.

Trim options include the Luxury package for the base HSE trim as well as the Supercharged model. The HSE Luxury package includes automatic high beams, heated front and rear seats, and improved upholstery. The 2011 Range Rover Sport Supercharged includes the more powerful engine, F1-style paddle shifters on the steering wheel, and an improved suspension system. Satellite radio is standard in the Supercharged.

The 2011 Range Rover Sport presents a conundrum for both its owners and reviewers. Compared to the high-end Range Rover, it's smaller, lighter, and more maneuverable, especially in tight city driving. It also costs thousands of dollars less, making it attractive to buyers who want the cachet of a Range Rover and its distinctive looks without the hit to the wallet.

What's your take on the 2011 Land Rover Range Rover Sport?

GuruXWHZ3 Love it and just purchased a used one.

Have you driven a 2011 Land Rover Range Rover Sport?
Rank This Car

Looking for new headlights for both L & R, mines are yellow, any suggestions.

Can I Use My Pre Qualified Loan To Buy From A Private Seller?

Hi, I was pre-qualified for a loan through westlake. Can I use it to buy from a private seller?

How Do I Acquire A Deal Rating?

I would like to receive a deal rating for my car ad.