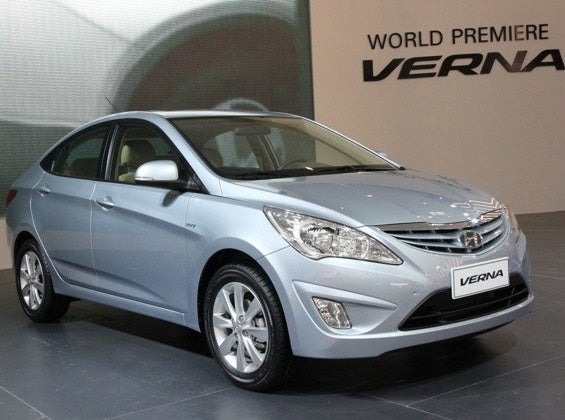 For a budget car, the 2011 Hyundai Accent delivers high fuel-economy numbers, six standard airbags, and more total interior volume than competitors, all at a price well below the others.

As an economy car, buyers should have few illusions about the performance or features available in the 2011 Accent, but they may be surprised by poor safety scores for the subcompact.

Let’s be honest—if you’re paying less for a new car than the price of many used cars, you probably don’t expect to get much for your dollar. The power, safety scores and lack of some basic features in the 2011 Hyundai Accent live up to that expectation. Despite this, the Accent may surprise you as a good commuter option, with six standard airbags, excellent fuel economy and an interior that, surprisingly, doesn’t scream cheap, despite a price that is.

The 2011 Hyundai Accent offers three different hatchback trims all of which are only available in a three-door version. The hatchback begins with the entry-level GL (formerly called the “Blue” trim), moves up to the midrange GS and finishes with the high-end, sporty SE. In addition, one four-door sedan, the GLS, is available. Although striving to keep the price affordable (the base GL MSRP comes in under $10,000), the 2011 Hyundai Accent also aims to beat out popular competitors in total interior volume (besting the Toyota Corolla and Honda Civic), cargo room (with 6.6 cubic feet more than the three-door Toyota Yaris), horsepower (more than the Yaris and Chevy Aveo) and fuel economy (beating highway mileage numbers of Nissan Versa and Honda Fit).

With Ultra Low Emission Vehicle (ULEV) certification upping its “green” cred, Hyundai changes few things for the 2011 model year (perhaps in anticipation of a rumored redesign for 2012). In order to lower the price of the SE, it has lost its formerly standard power sunroof. Two colors have been added to exterior choices, Clearwater Blue and Boston Red, and a 172-watt AM/FM/XM/CD/MP3 audio system with standard 6 speakers, iPod/USB port and an MP3 auxiliary audio jack are now standard in the midlevel GS trim. All trims offer an available Bluetooth hands-free phone system.

Regardless of trim, the 2011 Accent offers a single engine: a 1.6-liter DOHC inline 4-cylinder with CVVT. The Accent gets 28 mpg city/34 highway when equipped with the 5-speed manual transmission that comes standard in the GL, SE (which comes with a B&M Racing sport shifter) and GLS. The 4-speed automatic (standard in the GS and optional only in the SE and GLS) produces similarly impressive fuel economy numbers: 28/36. Each comes with an Eco indicator, to promote fuel-efficient shifting and driving habits. In fact, the fuel economy is one of the major selling points for this subcompact front-wheel-drive car. Power, however, is not. The engine produces 110 hp at 6,000 rpm and 106 lb-ft of torque at 4,500 rpm—enough to commute or run errands quite comfortably, but lacking in much zip, particularly when paired with the automatic transmission. In one performance test, a manual-equipped Accent made a 0-60 time of 9.4 seconds, with the automatic transmission taking a lethargic 11.1 seconds. In general, the consensus seems to be that the manual transmission offers a livelier ride, while the automatic slows down the pep and, when pushed to accelerate, engine noise escalates, penetrating an otherwise reasonably quiet ride for a subcompact. One advantage of the Accent, however, is what Hyundai calls “America’s Best Warranty,” offering a limited warranty covering the powertrain for 10 years/100,000 miles and even including 24-hour roadside assistance for 5 years (unlimited miles).

The 2011 Accent comes with standard front MacPherson struts with coil springs, gas shock absorbers and a stabilizer bar, while the rear uses a coupled torsion beam with coil springs and gas shock absorbers. The rear torsion beam suspension, combined with 14-inch tires on all but the SE trim, results in noticeable body lean in the corners and even some audible tire squeal in fast curves, and the power rack-and-pinion steering gives little feedback from the road. The SE offers a standard “sport-tuned” suspension and wider, 16-inch tires, which reduce the lean in corners, but don’t entirely eliminate the problem. Despite the lean, most find that the standard suspension delivers a soft and generally smooth ride, particularly when the road is not too rough; however, large bumps produce a springy feel, even with the SE’s sportier suspension.

All in all, the Accent’s cabin is often described with pleasant surprise, given the budget-conscious nature of the vehicle. The interior is described as simple, clean and no-frills, with easy-to-read gauges and easy-to-use controls. The interior materials don’t appear excessively cheap and flimsy, and the cabin insulates reasonably well from outside noise (hard acceleration excepted). Seating five, Hyundai boasts that the Accent has more total interior volume than either the more expensive Toyota Corolla or the Honda Civic. The front seats, with six-way manual adjustment for the driver’s seat (including dual height adjustment), are typically described as feeling comfortable and spacious. The rear, however, is another story. Adults may feel the lack of legroom and knee space when front seats are pushed back. The sloping roof of the hatchback also impinges on the headroom in the rear and makes getting in and out of the car an activity suited for contortionists. The rear cargo for the hatchback Accent measures 15.9 cubic feet, and the sedan GLS shrinks the size of the trunk to 12.4 cubic feet (although rear seats fold in a 60/40 split to increase rear storage). The shallow cargo openings in both Accent styles, however, may make it more difficult to load big items.

The GL (base trim) three-door hatchback offers little in the way of bells and whistles, and in fact, very few can even be added. Features such as cruise control, power locks and windows and even a basic stereo system are not even available as an option for the GL (although it does come prepped for an after-market stereo with four speakers). Air conditioning is one of the few available options for the trim. The tradeoff, of course, is its MSRP of $9,985.

Stepping up a trim level in the hatchbacks, the GS includes air conditioning and, new this year, an AM/FM/XM/CD/MP3 audio system with six speakers as standard features. It also provides an iPod/USB port and auxiliary input jack. Tilt steering wheel, maplights with a sunglass holder and a rear window wiper/washer are all standard as well. The GS hatchback has a single available package of options: the Premium Package, which groups together optional antilock brakes with electronic brakeforce distribution, power windows and locks with remote keyless entry, dual power outside mirrors and two illuminated vanity mirrors inside.

The high-end SE trim is the final hatchback offering for the 2011 Accent. The SE matches the features in the GS with the Premium Package, but adds a sport-tuned suspension, foglights, tinted glass, a windshield shade band and larger, 16-inch alloy wheels to the exterior. Inside, the SE features a standard leather-wrapped shift knob and steering wheel with mounted audio controls, metallic interior accents and standard cruise control.

The GLS sedan sports a black front grille with chrome accents (in lieu of the hatchbacks’ bodycolored grille) and includes the tinted glass and windshield shade band found in the SE. Inside, air conditioning is standard, but other features are packaged in the GLS Premium Package, which includes a tilt steering wheel with audio controls, power windows, cruise control and power locks with remote keyless entry. The Premium Package also adds antilock brakes with electronic brakeforce distribution. The standard stereo in the GLS mirrors that of the GS and SE: six speakers for the Autonet AM/FM/XM/CD/MP3 system, which includes a USB port and auxiliary audio jack.

One of the advantages of the Accent is that, even at its price point, it comes with standard tire pressure monitoring and six standard airbags (dual advanced front airbags with an occupant classification system, front, seat-mounted, side-impact airbags and roof-mounted side-curtain airbags for the front and rear passengers). Antilock brakes with electronic brakeforce distribution, however, come standard only at the SE trim level. ABS is optional for the GS and GLS trims, but not available for the GL base trim. Similarly, only the GS and SE hatchback trims come with a rear windshield wiper to improve rear visibility, while the feature is not available for the base trim. It is also notable that other safety features, such as traction and stability control, are not available features for any of the Accent trims.

The Insurance Institute for Highway Safety (IIHS) tests awarded the Accent (for 2006-2011 models) an Acceptable rating (one lower than its highest Good rating) for roof strength tests and front crash tests, but failed the Accent in side impact crash tests with the lowest possible Poor result.

Most Hyundai Accent owners don’t seem to regret their budget buy. In fact, most seem to have been pleasantly surprised by what the car has to offer, even with the base GL trim level. The biggest complaints were the small size of the gas tank (11.9 gallons) and a lack of some standard features (especially cruise control). Others seem less fazed by this, noting that the installation of your own stereo in the GL, for example, was a small additional price to pay for the otherwise extremely affordable commuter car. Owners note that the car is not as comfortable for adults in the rear, however, citing a lack of legroom when the driver’s seat is pushed back far enough for comfortable driving, as well as the soft suspension which can bottom out in the GLS when four adults are along for the ride. Engine and road noise were other notable downsides to the Accent experience.

On the upside, however, Accent drivers find it a comfortable driving experience, with good seat height and support for the front. Easy to drive, maneuver and park, Accent owners typically love the price and mileage of the small car. Both hatchback and sedan owners comment on the large cargo storage areas—deceptively so given the seemingly small exterior shape of the car. For towing behind an RV or commuting around town, there seems to be little buyer’s remorse over the 2011 Hyundai Accent.

What's your take on the 2011 Hyundai Accent?

Have you driven a 2011 Hyundai Accent?
Rank This Car

Is This What A New Spark Plug Is Supposed To Look Like After Driving 5 Mile...

Sooo I went to Midas to get a tune up and oil change, and just out of curiosity i asked my buddy to pull a spark plug out to see what it looked like. This is a picture of a spark plug pulled out aft...

My Brake Lights Are Not Working In My 2011 Hyundai Accent

I've repl the bulbs and checked the fuses

What Is The Problem With My Knock Sensor?

3 weeks ago my check engine light came on during a long drive. I had AutoZone run a test and they recommended I replace my knock sensor, so I did. The light went off while I was waiting for it to be m...

Car Stalls At Idle, Takes Time To Restart, No Codes

I was hoping someone here might be familiar with a problem I've been having with my 2011 Hyundai Accent. My car randomly stalls when I approach a stop or even while parked and idling. It happens on ...

I have to pump the gas a few times before it would start. The gas cap has been replaced and no error comes up on the computer