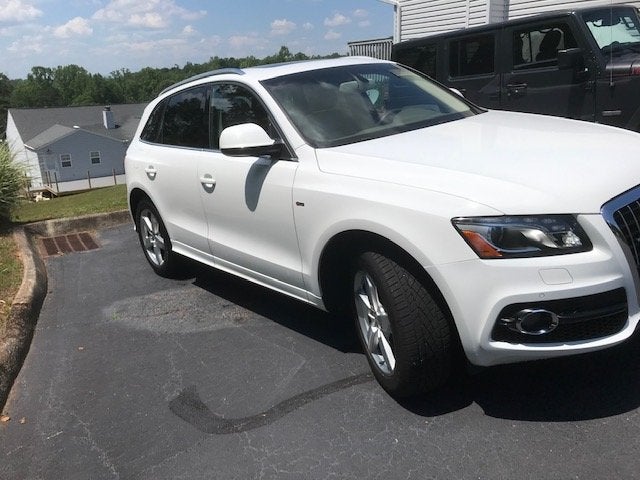 For 2011 Audi leaps into the hybrid SUV fray with a new version of its popular Q5 luxury crossover. While the 2011 Q5 will still offer an excellent 3.2-liter gas engine as standard equipment, the big news is the availability of a full parallel hybrid drivetrain, an Audi first. While pricing and other details are scant at the moment, Audi has said the 2011 Q5 hybrid will be available in late autumn 2010 and will feature a 2.0-liter, four-cylinder gas engine mated to an electric drive system.

First offered stateside in 2009, the Q5 has earned high praise for its classy interior and excellent driving dynamics. Competing in a crowded luxury crossover market filled with other pint-size entries like BMW’s X3, Mercedes’ GLK, and the newly downsized Cadillac SRX, the Q5 has succeeded in establishing itself as a hot-selling market force. Though a bit late to the party, Audi made sure the Q5 offered the combination of style, utility, and performance that today’s luxury cute-ute buyers want.

While the introduction of the hybrid trim is the big news for 2011, expect Audi to tweak some of the Q5’s exterior details and add optional rear-seat torso airbags. The German automaker is also dangling the prospect of bringing the diesel Q5, already a hot commodity in Europe, over to these shores. An oil-burning Q5 would seem to offer excellent fuel economy while providing spunky low-end torque, yet no definitive plan is in place to import the diesel variant, perhaps owing to America’s rather puzzling lack of interest in the technology.

While the four-cylinder Q5 hybrid will garner plenty of attention, the gasoline-powered V6 version currently on sale will undoubtedly remain popular in 2011. The Q5 3.2 Quattro (as the V6 version is known) features standard all-wheel drive (AWD) and a six-speed automatic transmission. Though it’s ambitious base price (just under $38,000) places the Q5 squarely in the upper end of the small SUV market, well-to-do buyers get a host of standard equipment and a capable skill set for their dough.

The Q5 shares its unit-body platform with Audi’s class-leading A4 sedan, riding on the same 110.6-inch wheelbase while jacking up the ride height to fit the SUV profile. As mentioned, Audi’s excellent Quattro AWD system is standard, using the now familiar TORSEN (TORque SENsing) differential to seamlessly transmit power to all four wheels. A variety of electronic stability and traction aids assist the Quattro system in delivering limpet-like traction.

While the Q5 hybrid will get a 2.0-liter inline four-cylinder with an output-boosting turbocharger, the V6 model is powered by a naturally aspirated 3.2-liter engine. This 24-valve, all-aluminum motor features high-tech direct fuel injection and makes 270 hp and 243 lb-ft of torque, more than enough to move the 4,300-pound Q5 smartly along. Power is routed through a six-speed automatic gearbox, the only transmission offered. While it shifts smoothly and features a sport mode, the automatic transmission lacks the fun factor of Audi’s crisp manual gearbox, which is available only in Europe, where folks still like to use both feet to drive.

Where the Q5 really shines is in its suspension setup. In the luxury crossover segment, many offerings strike a poor balance between handling and ride comfort. Where BMW’s X3 is much too harsh and Lexus’ RX 350 too soft, the Q5 is just right; its four-wheel independent suspension soaks up bumps well, yet still takes a confident set when the road gets twisty. Body lean is well managed, and the crisp variable-assist steering allows for excellent maneuverability. Braking is by discs at all four wheels with standard antilock control, and the pedal provides a solid feel, bringing the Q5 to a stop from 70 mph in a scant 170 feet.

Three trim levels will be offered for the 2011 Q5. Premium (base) trims come standard with leather upholstery over power front seats, genuine wood trim, and automatic climate control. Stepping up to the Premium Plus trim level nets buyers Bluetooth and iPod connectivity, along with a large panorama sunroof and heated seats. The range-topping Prestige trim gets Audi’s excellent MMI navigation system interface, along with a parking camera and thermal cupholders that can keep your Starbucks toasty all day.

Recent offerings from Ingolstadt have placed a high priority on interior fit and finish, and the 2011 Q5 is no exception. Its expanses of soft plastics, fine leather, and polished timber are carefully matched and seamlessly assembled. While some controls are curiously placed, every button and switch moves with a smooth, dampened motion and feels engineered to last a lifetime. Space up front is generous, but the somewhat cramped rear seat only grudgingly accommodates adults. Cargo space is adequate at 29.1 cubic feet, but the luggage area is somewhat oddly sized due to the swept roofline.

Safety is important to the young, upwardly mobile families that often buy small SUVs, and the 2011 Q5 offers a full suite of modern collision-avoidance equipment. In addition to antilock brakes and electronic stability control, Q5 Prestige trims come equipped with a blind-spot warning system. Front, side, and curtain airbags are standard, with rear-seat side torso bags optional for 2011. In NHTSA testing the Q5 earned the top rating of five stars in frontal and side impact categories.

So far Audi has hit a home run with the Q5, and the 2011 model further expands on its impressive range of capabilities. While the BMW X3 provides a slightly sportier drive and the Mercedes GLK wears a prestigious three-pointed-star (and the steep pricetag that comes with it), the Q5 does everything well and looks good doing it. The addition of an earth-friendly hybrid drive system will set the Q5 further apart from the expanding pool of luxury crossovers. It’s a shame that Audi’s product planners refuse to import a trim sure to win over leadfoots and eco-warriors alike: the turbocharged, diesel-powered, seven-speed Q5 3.0 TDI. This European trim makes a stunning 369 lb-ft of torque and still delivers excellent mileage - why the Germans think we don’t want it is a mystery.

Users ranked 2011 Audi Q5 against other cars which they drove/owned. Each ranking was based on 9 categories. Here is the summary of top rankings.

Hey I have a Audi 2011 Q5 3.2 and the door buttons don’t work .. usually when it’s something with doors Couple won’t work but in this case none work .. how do I enable keyless entry .. my remote wo...

How do Audi drivetrain and mechanicals hold up or last ? 200 k miles what can be expected before serious repairs are needed?

How Do I Reset Service Due Light On Dash For Inspection Due On My 2011 Audi...