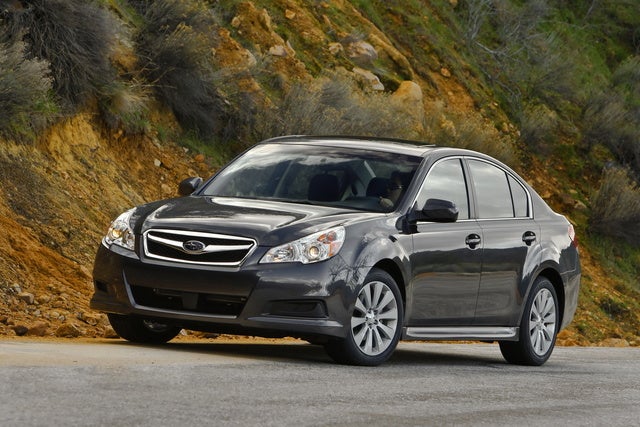 Class-leading fuel economy and interior space coupled with some potent engines and a comfortable ride only bolster the 2010 Subaru Legacy’s already strong foundation in its class.

The non-turbo 2.5 is slightly underpowered, but it’s the sloppy six-speed manual that really disappoints in the 2010 Legacy.

It’s because the Legacy does so many things right that the poor performance of its six-speed manual transmission is such a disappointment. The 2.5GT was always an odd duck in the trim lineup, but beloved, and with the six-speed being the only option for that trim, it leaves it dead in the water. Non-turbo versions are sluggish, but not painfully, so if you don’t need the speed of the 3.6R trims, the 2.5is may be your best bet.

A twenty-year lifespan provides a lot of time for refinement, and Subaru had a heck of a fine starting point with the Legacy. Before the official unveiling at the New York International Auto Show (April 10th-19th), Subaru revealed specs and pics for the 2010 Legacy, showing us a car that's bigger, taller, and more powerful.

The new Legacy has been redesigned and is almost 3 inches larger all around, including the wheelbase, stretching its midsize limits slightly. This all-wheel-drive (AWD) four-door sedan additionally gets some new trim levels and a new top-tier six-cylinder engine, as well as modifications to its four-cylinder choices, improving power and economy. Even with more changes and additions inside as well, the price for the base 2.5i starts at just under $20,000, $800 less than in 2009.

2.5i trims are powered by a 2.5-liter boxer-four producing 170 hp and 170 lb-ft of torque that comes in at 4,000 rpm as opposed to 4,400 rpm in 2009, thanks to a resin-based intake manifold that lowers weight. Improved cooling and exhaust tuning has also increased fuel economy, bumping the six-speed manual transmission to 19/27 mpg, while the CVT option for this engine achieves a class-leading 23/31 on regular-grade gasoline, and is the first longitudinally mounted CVT in an AWD car.

The 2.5GT gets a turbocharged version of the 2.5-liter engine, with increased power and efficiency over last year. Numbers show at 265 hp and 258 lb-ft of torque, an increase of 22 hp and 17 lb-ft of torque over last year's, but even more impressive is that those numbers show up at 5,600 and 2,000 rpm, respectively, as opposed to 6,000 and 3,600 for 2009. This means a 0-60 sprint of 5.9 seconds – 2 seconds faster than last year! And all of this due to a modified turbocharger that also increases efficiency to 18/25 with the six-speed manual, the only transmission available for the engine, although premium-grade gasoline is required.

The real performer is the 3.6-liter boxer six in the 3.6R trims. With another increase of 11 hp and 32 lb-ft of torque, the turbocharged six puts out 256 hp and 247 lb-ft of torque, drops its peak hp rpm to 6000, and achieves 18/25 mpg on regular-grade gasoline, even with the strange choice of the five-speed automatic that is the sole offering.

The Legacy's MacPherson front struts and double wishbone rear suspension have been revised this year in a configuration that is now being used in all Subarus. With steering response that has been described as slightly overboosted, the Legacy is not known for handling like a slot car, but it is more than capable, especially with the lauded Subaru AWD system. Still, don’t be surprised by body lean if you push it too hard in the corners, as comfort seems to be the primary concern here. As such, the 16-inch wheels on the 2.5i, and the 17-inch units on the premium 2.5 and 3.6 trims absorb all but the most aggressive bumps with poise, and even the 18-inch 2.5GT wheels measure up quite well. Subaru is also boasting a 20% increase in braking response and power, thanks to a revised booster. It’s a welcome upgrade, even though the previous Legacy didn’t exactly suffer from poor braking.

Due to the Legacy’s growth for 2010, rear passengers enjoy an additional 3.9 inches of legroom, as well as a substantially larger door opening. A 3.3-inch height increase means additional headroom front and rear for overall interior space that is well above the class average. Even those over 6 feet tall will have no issue with either leg or head space, even with the optional sunroof.

Controls are well placed, and the main gauges are easy to read, although some have complained about the information panel being too small for quick glances. Interior materials are well-fitted, but are substantially made up of the hard plastics that are usual for the class. Still, the Legacy manages to avoid looking cheap, even in its entry-level trims.

Subaru attempted to create a more open space, eliminating the lever-operated parking brake in favor of a cleaner electronic option, and redesigning the instrument panel along the same lines. The three-spoke steering wheel has been redesigned and includes audio controls and paddle shifters for automatic trims. Interior storage has also been increased with a larger console box and armrest.

The Legacy's increases in both fuel economy and interior room have received much deserved universal praise, but a painfully vague six-speed manual transmission frustrates many owners, especially considering it's the only option for the otherwise excellent 2.5GT trim.

Have you driven a 2010 Subaru Legacy?
Rank This Car

Guru9SD77X asked a 2010 Subaru Legacy 2.5i Premium General question about a month ago

I paid to list my car yesterday and my credit card was charges. Today, I don't see the car listed and my profile doesn't contain the car I listed. Can you credit my credit card transaction or tell...

Guru9SD77X asked a 2010 Subaru Legacy 2.5i Premium General question about a month ago

I listed a car for sale yesterday and my credit card was charged. Photos were uploaded and everything looked good. I can't find the listing and it is not in my profile. Can you credit what was ch...

Guru9SD77X asked a 2010 Subaru Legacy 2.5i Premium Car Selling & Trading In question about a month ago

I listed a car for sale yesterday and my credit card was charged but I don't see the listing. Please advise on how to proceed. Thank you.

Is The Outside Mirror For A 2010 Compatible With Other Years?

Hi everyone! I'm looking to buy the outside passenger mirror w/ blinker for my Subaru sport legacy 2010 but cannot find it. Does anyone know if the 2013 is compatible? I found that one online but do...

My 2010 Subaru Legacy check engine light along with cruise and AToil came on. Brought it to dealer and they said we were missing 2 fuses from the box. No body touched this and they charged me 150...