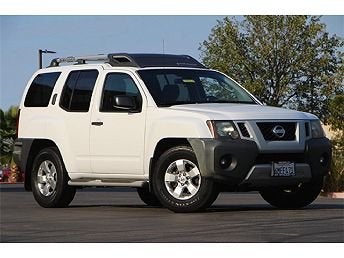 The 2010 Nissan Xterra has a powerful and responsive engine with a competent off-road suspension and four-wheel-drive setup.

The low price and youthful image of the 2010 Nissan Xterra are sure to continue to draw a following, but that should not be taken as an indication that it's a competent entry in its class. Any small to midsize SUV is going to have at least one of the problems of the Xterra – namely a stiff, jarring ride – but that’s no excuse for its dismal fuel economy, depressing interior, and uncomfortable seating. Many of its competitors simply do the job better.

Utilizing Nissan’s F-Alpha platform, the same used in the Nissan Frontier and Titan, the Xterra has been Nissan’s compact SUV since 2000. Named after the Xterra off-road triathlon race Nissan sponsored through 2006, the Xterra was marketed upon introduction with the strange angle of including a first-aid kit that's incorporated into the vehicle’s design, creating the hump-back rear gate that has, along with the raised rear roof, become iconic of the Xterra’s style and design.

This four-door SUV seats five, and its four trims come with one engine and the choice of a six-speed manual or five-speed automatic transmission, with either rear-wheel (RWD) or four-wheel drive (4WD). 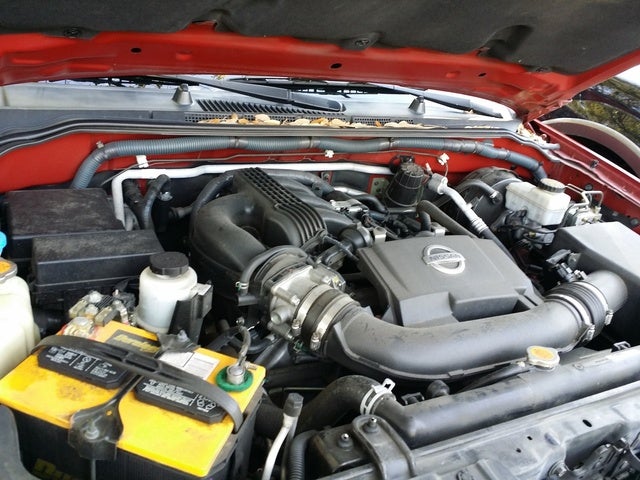 All Xterra trims are powered by a 261-hp, 4.0-liter V6 engine, a variant of the 3.5-liter VQ35DE V6 used in the Altima, Maxima, Murano, and Quest, except with more than 10mm of extra stroke. Improvements over the 3.5-liter include continuously variable valve timing and a variable intake system, a silent timing chain, hollow and therefore lighter camshafts, as well as several friction-reducing upgrades like microfinished surfaces and moly-coated pistons. The 4.0-liter also utilizes Nissan's direct ignition system.

A RWD SE Xterra with the five-speed automatic was timed in the 0-60 run at 7.1 seconds, although 4WD trims are less sprightly. The engine provides slight growl under load, but it’s neither intrusive nor coarse, and both transmissions perform with competence to provide power in all situations. 4WD systems come with a low-range gear for off-roading, but the 4WD can not be left engaged on dry pavement. Maximum towing capacity is 5,000 pounds, and the EPA estimates the six- and five-speed transmissions will return fuel economy of 16/20 mpg and 14/20, respectively, with regular-grade gasoline.

The Xterra has been marketed as an off-road vehicle since its inception, and it handles accordingly. A short wheelbase and stiff suspension, even in non-Off-Road trims, provides a choppy, harsh ride on even slightly marred pavement. The stiffer suspension of the Off-Road trim only worsens the experience, reverberating inconsistencies with seeming relish. Body lean and plow are almost ignored, induced as they are at the slightest input, and while the brakes are neither impressive nor inadequate, at least the steering is responsive, with a tight turning radius that makes parking and city maneuvering easy.

The design of the Xterra is deliberately Spartan and utilitarian, but it seems Nissan took this concept a bit too far, as the Xterra’s interior drowns in cheap, hard plastic surfaces. While most controls are well-placed and easy to read, the steering wheel controls – a strange addition to this rough-and-tumble vehicle in the first place – are hard to read in almost any situation due to a curious black-on-gray design with no backlighting.

While space is not generally lacking, the same can’t be said for comfort or support, as spirited driving has passengers holding on just to stay planted in their seats, and long trips will have all occupants begging for regular stops to stretch their legs.

While the 4.0-liter V6 provides plenty of power, the efficiency of the engine needs much improvement. Competent off-road, the suspension provides a jarring, uncomfortable ride only magnified by inadequate seating. A cheap interior only detracts from its overall styling, rather than providing the tough-guy atmosphere Nissan was attempting.

Have you driven a 2010 Nissan Xterra?
Rank This Car

Ok so I have a 2010 Nissan Pathfinder that, before it was mine, it was unfortunately my husband's (originally, it was my husband's mother's, she babied it and took it to the dealer for any and eve...

I've had this problem with the two XTerras I've owned, both within the last couple of years and both used. Is there a tensioning nut putting pressure on the spring that will allow for better cleani...

Knocking Sound When Car Is Turned On ?

Every time I turn on the ignition a knocking sound lasts for five seconds?

Are the brakes suppose to go to the floor when stopping???