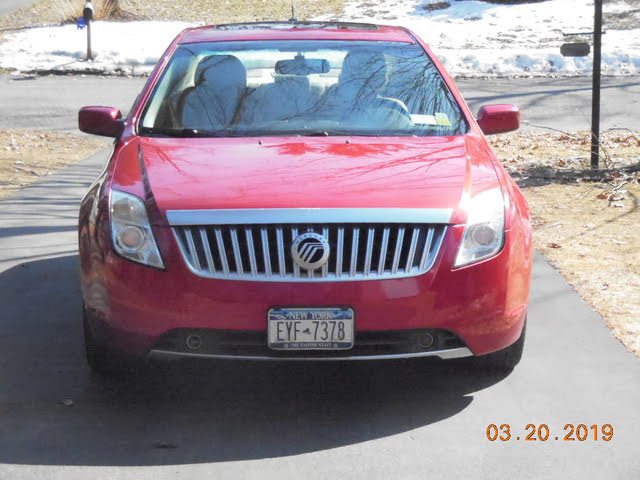 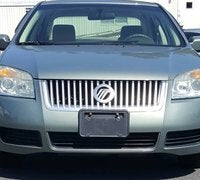 The raucous four-cylinder engine's noise, a less-than-adept electric power steering system, and lackluster acceleration from the hybrid engine combine to tarnish a bit of the 2010 Milan’s luster.

Though not without detractors, Mercury's 2010 Milan, along with its award-winning Ford Fusion cousin, are among the best family sedans the country, not to mention the world, has to offer. The well-conceived, well-built, well-equipped Milan seems assured a place among the more refined automobiles on the market. Furthermore, a new Hybrid trim only enhances its appeal.

A subtle yet readily noticeable redesign of the front and rear fascias has given the 2010 Mercury Milan a somewhat more refined look, further distinguishing it from its Ford Fusion kinfolk. It’s a well-known fact that the Mazda6-based Fusion is one of Ford’s most successful entries in the five-passenger sedan market, and the Milan reflects the traditional refinement that Mercury adds to Ford’s more plebian design features. Two-tone interior trim and upholstery, as well as simulated wood and alloy pieces, along with genuine chrome trim accents in the cabin complement the exterior tweaks to proclaim Milan’s uniqueness.

With the addition of a hybrid trim this year, the 2010 Milan is now available in four trims, the base I4, midlevel I4 Premier, amped-up V6 Premier, and the state-of-the-art Hybrid. All trims except the V6 Premier are front-wheel-drive-only (FWD), with the V6 Premier delivered with standard all-wheel drive (AWD). As can be assumed from their names, the I4 trims are equipped with an inline four-cylinder engine (I4), with the V6 Premier, obviously, featuring a standard V6 powerplant. The Milan Hybrid also comes with a standard I4 gasoline engine that combines with the two-mode hybrid system for superb mileage and, needless to say, a smaller environmental impact. Additionally, a six-speed manual, six-speed automatic, or a six-speed auto-manual transmission is available, with the six-speed stick standard on the I4 and I4 Premier, and the automatic optional for the I4 Premier and standard with the V6 Premier. The Hybrid, meanwhile, is managed by a continuously variable transmission (CVT) that allows a more seamless transition from gas to electric power.

Ride and handling are among the Milan’s strong points, while standard amenities, build quality, and reliability have been upgraded to address some complaints from 2009. All indications are that the Milan/Fusion combination is going to give the likes of the Chevy Malibu, Nissan Altima, Honda Accord, and Toyota Camry a run for their family-sedan money.

By popular demand, a new 2.5-liter I4 engine replaces 2009’s anemic and inefficient 2.3-liter I4 as the standard powerplant in the 2010 Milan I4 and I4 Premier trims. A standard six-speed manual transmission manages the I4’s 175 hp at 6,000 rpm and 175 lb-ft of torque at 4,500 rpm, while a standard six-speed automatic does the same thing in the I4 Premier trim. The six-speed automatic is also an option for the base I4. With variable valve timing, this improved I4 is rated at some 22/29 mpg by the EPA, with some reviewers claiming an average closer to 29 under normal driving conditions.

As implied in its moniker, the 3.0-liter variable-valve-timed V6 engine and six-speed auto-manual transmission are the standard drivetrain for the 2010 V6 Premier full-time AWD trim. This combo nets 240 hp at 6,550 rpm and 223 lb-ft of torque at 4,300 rpm to the tune of 18/25. The V6 Premier’s AWD system, in the meantime, is managed by a center-mounted, mechanical, limited-slip differential.

Finally, there’s the FWD-only Milan Hybrid’s gas/electric powertrain, co-starring a variable-valve-timed 155-hp 2.5-liter I4 gasoline engine and 106-hp electric motor, supported by a continuously variable transmission (CVT). These two powerplants combine to produce some 191 hp and 136 lb-ft of torque, 0-60 in a respectable 8.7 seconds, and, best of all, an EPA-estimated 41/36. Regenerative braking helps to juice up the nickel-hydride battery pack, while automatic engine shutdown and startup at stops increase mileage while decreasing emissions. Mercury additionally claims a top speed of 47 mph on electric power alone, while a deceleration fuel cutoff feature for the 2.5-liter engine helps preserve its head-turning mileage numbers.

Most reviewers claim adequate power and performance from the conventional 2.5-liter I4, though it is noticeably raucous on acceleration, with little improvement at highway speed. One test had the 2.5-liter I4 improving its 0-60 acceleration to 9.5 seconds, so it’s a bit of a trade-off, a little noise for better performance. The V6, on the other hand, though a tad more subdued, noise-wise, is considered somewhat tepid in its performance compared with much of the competition. Most reviews, however, find it perfectly acceptable for normal driving. Less-impressive acceleration is noted by reviewers for the Hybrid system, though all note that once up to speed, the Hybrid passes and merges as well as the best of them, with a silky-smooth transition from gas to electric power. All of the Milan’s transmissions, including the Hybrid’s CVT, are described by most reviewers as smooth and responsive.

With a four-wheel independent suspension, bolstered by a long- and short-arm front setup, as well as front and rear stabilizer bars and multi-link rear suspension, the 2010 Milan is praised by virtually all professional reviewers for its elegant ride. Combined with the base I4’s 16-inch painted aluminum wheels and the 17-inch alloys standard with all other trims, this passenger-friendly suspension minimizes the usual road imperfections, with the Hybrid trim’s extra weight allowing even less jarring and jumping, though larger bumps will definitely be noticed. Reviewers sum up the Milan’s ride, for the most part, as quiet, comfortable, and refined.

Body lean and noseplow are well-modulated in all trims, with the Hybrid mentioned by a number of reviewers as especially graceful in turns. Unfortunately the Milan’s electric power steering is now used in place of the well-suited hydraulic system, leading to a significant degradation in road feel. Most vehicles of this ilk, however, are equipped with this type of steering with little effect on popularity.

Some reviewers find the Hybrid to have a “grabby” nature, in comparison to the conventional trims, leading to a bit of variation in stopping power. Also noted is a certain trickiness in modulating the Hybrid’s pedal pressure, which makes braking a matter one has to learn.

Options for the base I4 include many of the standard amenities of the Premier trim level, including the highly regarded SYNC infotainment technology. Further options available throughout the lineup include voice-activated DVD navigation, power moonroof, 18-inch luster nickel wheels, upgraded Sony audio components, including a 6-CD changer and 12 premium speakers, rear spoiler, and the VOGA appearance package featuring Cashmere leather upholstery and appointments, upgraded wheels, and unique VOGA badging.

As for the glaring omissions mentioned earlier, the 2010 Milan does not offer a universal remote garage door opener/safety light transmitter, nor is driver memory technology or dedicated rear-seat entertainment available.

Though gauges are large and unobstructed, more than a few reviewers find them to be somewhat indistinguishable in daylight, while audio and climate controls are inconveniently placed and difficult to differentiate. Seats are found to be supportive and comfortable by the vast majority of reviewers, while road and wind noise are, for the most part, well tempered by cabin insulation. Most cabin trim is found to be top-shelf, with liberal soft surfaces, as well as better-than-average fit and finish.

Though addressing a number of owner complaints from 2009, Mercury has still to contend with a number of glitches noted by owners of the 2010 Milan, including the lack of a number of common standard and optional features, a noisy I4 engine, a hefty Hybrid price tag, poorly designed headrests, and some problems with discernment of gauges in the daytime, as well as poor placement of a number of controls and buttons, particularly the audio and climate controls. The still-apparent lack of hood struts to replace the somewhat chintzy support bar also has a few owners scratching their heads, as does the fact that the Sirius satellite radio programming accepts readmission to only its priciest subscription plan.

On the positive side, however, owners laud the improved power of the new conventional 2.5-liter I4 as well as the 2010 Milan’s more refined appearance. Ride comfort and Ford's much-ballyhooed SYNC system are also among the items most highly praised by owners, while hybrid technology, available AWD, and fuel efficiency up and down the lineup come in for their share of owner adulation. All in all, cheers far outweigh jeers for the 2010 Milan, but there’s always room for improvement, and a number of owners have commented that Ford/Mercury seems to get it.

Have you driven a 2010 Mercury Milan?
Rank This Car

Smoke Out My Vents And Air Stopped.

Was at the gas station pumped my gas got back in the car turned my air on. High and on 60 degrees.. And short after the air sputters I see a little smoke and the air completely stops. How can I ...

My Car Keeps Blowing Start Fuse When I Turn Key

238 views with 8 answers (last answer about a year ago)

How to reset the dash clock

Own 2010 Mercury Milan Car Turns Off While Driving, Car Is Jumping As If It...

own 2010 mercury milan car turns off while driving on highway it has occurred several times. , car is jumping as if it wants to take off fast, when at stop light car is shaking, when i fill my gas tan...