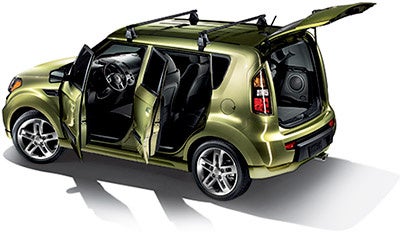 The Kia Soul, a five-seat crossover SUV based on a stretched and stiffened Kia Rio platform, debuted at the LA Auto Show in 2008 and will be offered as a 2010 model. With its five-door hatchback design, front-wheel-drive drivetrain and fuel-efficient four-cylinder engines, it seems slated to tackle the urban youth market in a move that will endlessly be compared to Scion. Four trim levels - Base, Soul+, Soul!, and Soul Sport - stretch across two engines, a 1.6- and a 2.0-liter inline four.

Neither engine offers blistering performance - 122 hp for the 1.6 and 142 for the 2.0 - but the 2.0 at least seems to offer sufficient power and pep for around-town driving, if not highway passing or hill climbing. As the engine is pushed, it becomes ragged and harsh tones penetrate the cabin, and while no test drives could be found for the 1.6, one can only assume this will be exacerbated with its loss of displacement and power.

As with Scions, the major points of attraction for the Soul come in the form of extreme affordability and unique customizability. Even the top-tier Soul Sport is estimated to fall below twenty thousand dollars, and a long list of options coupled with many standard high-tech features are slated to attracted younger audiences. If high performance isn’t much of a concern, the Soul seems a likely candidate to make a lot of noise in its debut year.

I just changed the front brake pads and blead the lines on my 2010 Kia soul. We pumped the brakes and it was fine, but when we turned the car on and push the brake pedal, my foot goes straight to ...

i have a 2010 Kia Soul. I've been to the dealership 3 times and and they still can't find the problem. This morning we are taking it in again. Problem? Every now and then I get in the car put key ...

Has Anyone Else Had A Problem With Sudden Acceleration In A KIA SOUL? Mine ...

My 2010 KIA SOUL which we bought from the dealer fully reconditioned used (one year ago), took off from a dead stop at a stop light with my foot on the brake when I began to release the brake to move ...

I have a 2010 KIA soul, and lately I have been having a problem with every time it rains the passenger floor is very very wet. The dealership the last time I took it told me that there was no leak....

My Kia Soul just recently became difficult to start after driving and 3 times has died while sitting at a stop light. My engine light is not on. Up until 2 weeks ago it would start in one turn of ...