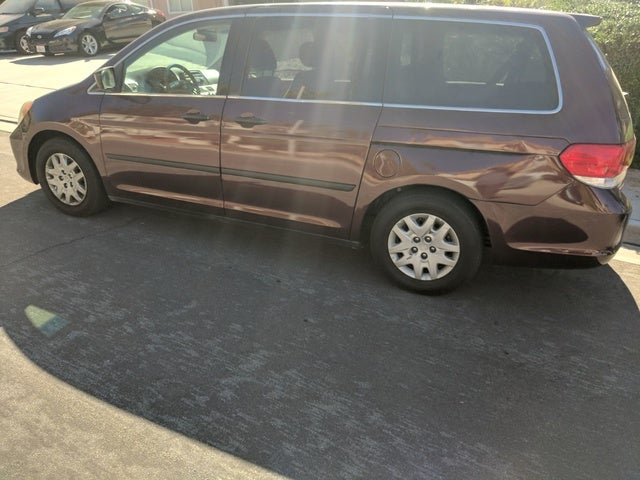 The 2010 Honda Odyssey minivan delivers just about everything a busy family could want, including top-rated safety features, a car-like ride, tight handling, and a versatile, easily reconfigurable interior with soft-touch surfaces and top-notch materials.

The Odyssey's exterior might seem a bit dated to potential buyers, while some owners would like to see better gas mileage from the Odyssey's V6 powerplant and smoother downshifts from the five-speed automatic transmission.

Although Honda has delayed a rumored major redesign of its popular Odyssey minivan, the 2010 iteration remains a highly capable vehicle that excels in just about every way. Current owners are hard-pressed to find fault with the Odyssey, and busy families who seek a safe, spacious, and reliable minivan can't go wrong in choosing the Odyssey.

The Honda Odyssey minivan receives minor exterior styling updates for 2010, including an updated grille and a number of new exterior colors. Other than that, the Odyssey changes little for 2010, despite rumors indicating a major redesign would take place this year. Many industry watchers were hoping the 2010 Odyssey would take the form of the sleek, futuristic JDM Odyssey, which went on sale in Japan in 2008 to much acclaim. However, we'll have to wait until next year to see if the highly anticipated and well-reviewed JDM design makes its way to U.S. shores in 2011.

For now, American owners will have to settle for the current Odyssey, which displays a design dating back to 2005. And for many owners with families who appreciate the expansive interior, car-like handling, wide range of amenities, safety features, and reliability offered by the current incarnation of the Odyssey, that's not a problem.

As in previous years, the 2010 Honda Odyssey comes in four trims, including the entry-level LX, the mid-range EX and EX-L (the L stands for leather), and the top-of-the-line Touring. Owners continue to appreciate the Odyssey for its versatility, thanks to such features as the second-row PlusOne Seat, which enables all trims except the LX to carry up to eight passengers.

Exterior features for 2010 include halogen headlights, body-color impact-absorbing bumpers, power side mirrors, and a rear roofline spoiler. While some consider the exterior design dated and uninspiring, the Odyssey remains one of the safer, more comfortable, and more capable minivans on the market, prompting U.S. News and World Report to rank the 2010 Odyssey number one out of a field of eight. 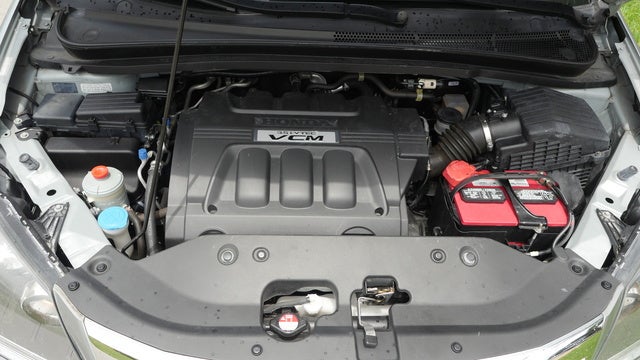 Two versions of the same engine power the 2010 Odyssey. The LX and EX trims come equipped with a 3.5-liter VTEC V6, which produces 244 hp and 240 lb-ft of torque. The engine features multi-point fuel injection and a Drive-by-Wire throttle system, which improves responsiveness when the driver steps on the gas pedal.

For the EX-L and Touring trims, the tweaked i-VTEC V6 generates an additional 5 lb-ft of torque (245 lb-ft) for slightly improved acceleration. In addition, the i-VTEC V6 features Variable Cylinder Management (VCM), which programs the powerplant to run on three, four, or six cylinders, depending on the power requirement, to conserve fuel and increase cruising range. The i-VTEC V6 also features Active Noise Cancellation, which helps ensure a quieter cabin, and an Active Control Engine Mount System, which reduces vibration.

Both powerplants link to a five-speed automatic transmission, which comes standard in all trims. The EPA estimates fuel economy numbers for the LX/EX engine at 16/23 mpg, which improves to 17/25 mpg for the EX-L/Touring engine, thanks to the VCM system. Both V6 engines run on regular unleaded gasoline.

The front-wheel-drive Odyssey delivers a smooth, comfortable, car-like ride, thanks to a fully independent MacPherson strut front and double wishbone rear suspension. Some owners might find the ride a bit floaty, although the soft-tuned suspension does a good job of absorbing most road bumps, ensuring passenger comfort. Variable power-assisted rack-and-pinion steering generally provides tight, precise handling, with good road feel. Drivers will notice some body roll in corners, however, due to the minivan's tallness.

The Odyssey's engine provides plenty of power for most types of everyday driving, according to owners and reviewers. The transmission shifts smoothly up through the gears, although some owners would like to see smoother downshifts. The four-wheel disc brakes do a good job of nimbly stopping the minivan with moderate pressure on the pedal. The 16-inch wheels on the LX, EX, and EX-L trims, as well as the 17-inch wheels on the Touring trim, all provide decent road grip and stability.

Most passengers will find the Odyssey's seats firm yet comfortable enough for long trips, with plenty of headroom throughout the cabin. Legroom remains good in the first and second rows, while taller adults will find the third-row bench seat tight. Similarly, the removable PlusOne Seat, which fits between the second-row bucket seats, will probably be too small for most adult passengers, but ideal for children. Standard storage features include a retractable center tray table, a second-row in-floor storage compartment, and 13 cupholders located throughout the cabin.

Overall, owners give high marks to the Odyssey interior's fit and finish, thanks to high-quality materials and soft-touch surfaces. The base LX trim comes well-equipped with such features as air conditioning, cruise control, and power windows and door locks. A four-speaker, 120-watt AM/FM audio system with a CD player and MP3 input jack also comes standard.

Second-row passengers get their own power window controls, and in EX trims and above, they get their own climate controls as well. The 60/40-split third-row Magic Seat folds flat into the floor on all trims to expand cargo space, which starts at 38 cubic feet with all three rows of seats in place, and expands to 91 cubic feet and 147 cubic feet, respectively, with the third and second rows folded down.

The Honda Odyssey earned a five-star safety rating from the NHTSA for protecting passengers in the event of a front or side impact. Standard safety features for the Odyssey include front side airbags and three-row side-curtain airbags with a rollover sensor. Antilock brakes with electronic brake distribution and brake assist come standard on all trims. In addition, all trims include Honda's version of an electronic stability program, called Vehicle Stability Assist. Other standard safety equipment includes daytime running lights and a tire pressure monitoring system. Front foglights come standard on the Touring.

Owners give the 2010 Honda Odyssey strong marks practically across the board, for everything from its reliability, capable handling, and smooth ride to its interior roominess, versatility, and even its resale value. The seven- to eight-passenger configuration fits well with most families' needs, and the well-equipped cabin keeps most occupants happy. The Odyssey's car-like driving dynamics also receive high praise from both owners and reviewers.

Despite the Odyssey's size, owners say it handles tightly, with good pickup and maneuverability. Fuel economy, however, receives mixed reviews, with many owners wishing for better gas mileage, especially from the lower-end trims. Other complaints focus on visibility out the rear, smoother downshifts for the transmission, and the high pricetags of better-equipped trims.

Have you driven a 2010 Honda Odyssey?
Rank This Car

Is there a way that when searching for a vehicle I can limit results to vehicles authorized manufacturer's? i. e. I only want to see Honda Odysseys being sold at Honda Dealers.

After Transmission Flush, Leak In Oil At The Valve

A car mechanic finished a transmission flush two months. And this month the check engine light came up. I took it to a honda dealer and the dealer stated that the Power steering Pump had to be resea...

40 views with 1 answer (last answer about a year ago)

How Do I Fix A Misfire Trouble Code?

replaced the #1 coil on 2010 Honda Odyssey and i"m still getting the same misfire code.

My 2010 Honda Odyssey tailgate does not close and latch completely and automatically as it should either with key fob or buttons in car. It will close and shut, but you can see the tailgate is no...