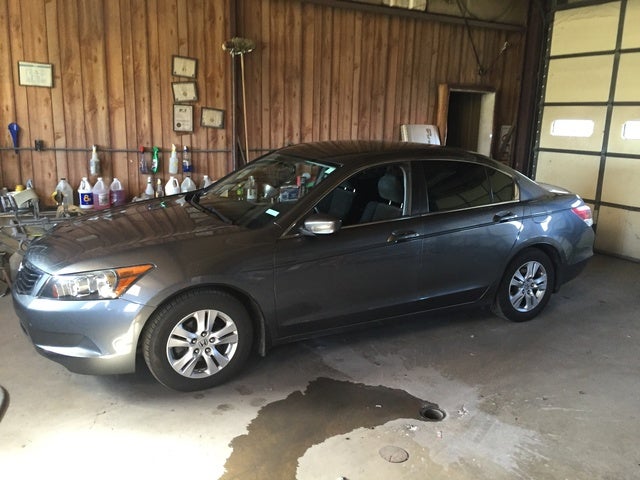 An expansive interior and a suspension that seems the perfect compromise between performance and comfort are the high points of the 2010 Honda Accord.

The two four-cylinder engines offered in the 2010 Honda Accord are abysmal in both power and process, ruining an otherwise enjoyable ride. 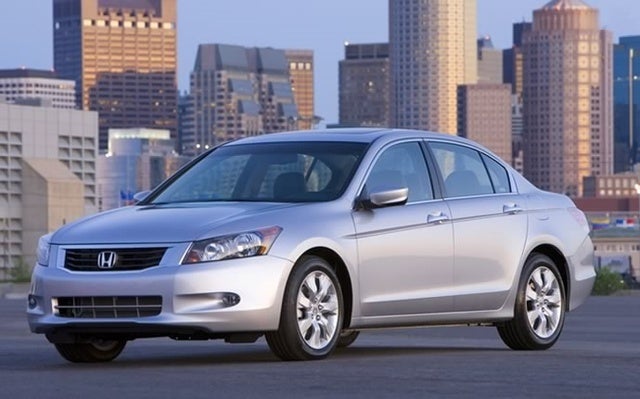 There are few surprises in the Accord, and that’s probably a good thing. It’s one of the supports of a constantly changing industry, and the Accord has managed to evolve while remaining a constant, contradictions aside. Choose the V6 - and apparently an interior color that retains the wood grain accents - and you’ll have little to complain about.

It might seem sacrilegious to say, but the Honda Accord is an American institution. It’s been in production for more than 30 years, putting 10 million versions of itself on the road in that time. It was the first Japanese car to be produced in the U.S., all the way back in 1982, and since then has gone from a compact hatchback to a midsize coupe all the way to a full-size sedan since its latest redesign in 2008.

Few changes are seen in this four-door, front-wheel-drive sedan for 2010, with the Accord being offered in four trims with two engines and transmissions.

The Accord's 2.4-liter inline four-cylinder engine is available in 177- and 190-hp versions, with a strange distinction of 13 hp. The engines have the option of a five-speed manual or automatic transmission, which makes a large difference on the road. 177-hp versions with the automatic are quite anemic, wanting for power in all situations other than takeoff. The manual transmission is a big help, and its smooth and precise operation make for a more enjoyable experience besides. Adding that 13 hp is definitely noticeable, although you’ll still be waiting around for the powerband to deliver in passing and climbing situations, even with the manual transmission.

Complaints have been heard about the four-cylinder engines offering coarse idle and annoyingly resonant vibrations that can be felt throughout the car, although the 190-hp version suffers less from this malady. With the recommended regular-grade gasoline, automatic-equipped four-cylinder Accords return 21/31 mpg, while manual versions improve around town for 22/31.

The 271-hp V6 is decidedly stronger and utilizes Honda's Variable Cylinder Management cylinder deactivation, which would account for its fuel efficiency of 17/25 on regular-grade gasoline. Unlike its brethren, the V6 is refined and composed, offering none of the loud harshness of the four-cylinder engines.

Reverberations from the four-cylinder engines resonating throughout the body and steering wheel aside, the Accord offers a pleasant, almost sporty ride that remains composed over all but the roughest road. It’s a compromise without much compromise, with light steering that’s still responsive, a competent suspension that controls lean and roll without becoming jarringly stiff, and bump absorption that offers cushioning without wallowing at highway speeds. It’s the same “most common denominator” approach that has made the Accord a best seller for three decades.

Seats are both comfortable and supportive, and since the 2008 redesign, which increased the overall dimensions of the Accord inside and out, there’s even room for those of us well over 6 feet tall, more than the class average. The rear seats offer the same support and comfort with plenty of room, exceeding the Accord's competitors even more than in the front, with plenty of room for entry and exit as well.

Honda has had plenty of time to refine the interior of the Accord, and it shows, with logical placement of controls and dials that are easy to both find and discern. The sole exception seems to be the optional navigation screen, which has been noted as difficult to read depending on light conditions in the cabin.

The NHTSA administration has awarded the 2010 Honda Accord five stars in all crash tests except side impacts involving the rear passenger, which got three stars in all trims. Safety features include daytime running lights, dual front, front-side and curtain-side airbags, four-wheel antilock brakes with assist, an anti-skid system, and a tire pressure monitor.

Owners are pleased with the overall refinement of the Accord, especially when equipped with the V6. The lack of poise with the four-cylinder engines seems uncharacteristic of the model’s history, and is a disappointment. Some have mentioned that the deletion of the wood grain accents in the interior with certain colors is a strange and unwanted choice, and complaints have been heard about the navigation screen.

GuruL4K6X Bought a 2010 EX sedan for my son while in college. The 2.4 four cylinder developed an oil use issue. Honda issued a recall on this motor because of excessive oil use. The recall required you to jump through many hoops to get Honda to replace the piston rings. Buyer beware! It continues to run, but @ 105k miles, it burns 1-2 quarts a 1000 miles. The rest of the car has been good.

Users ranked 2010 Honda Accord against other cars which they drove/owned. Each ranking was based on 9 categories. Here is the summary of top rankings.

Have you driven a 2010 Honda Accord?
Rank This Car

Cars compared to 2010 Honda Accord

I Am Considering The Purchase Of A 2010 Honda Accord EX-L (continues Below)...

Loud Humming Noise From Engine While In Drive

Last week my 2010 Honda Accord EX-L started to have this loud humming noise coming from my engine. Its sounds like I have loud exhaust but its from the engine not the muffler. Any ideas on what it...

Does Car Gurus Buy And Pick Up Used Cars?

Will car gurus buy and pick up my used car?

My battery went dead in my Honda accord tried to jump it and could not shut the alarm off! Then bought a new battery and it still won't shut off what do I do?

Rattling Noise When I Start It Up

2010 Honda Accord Trims For Sale