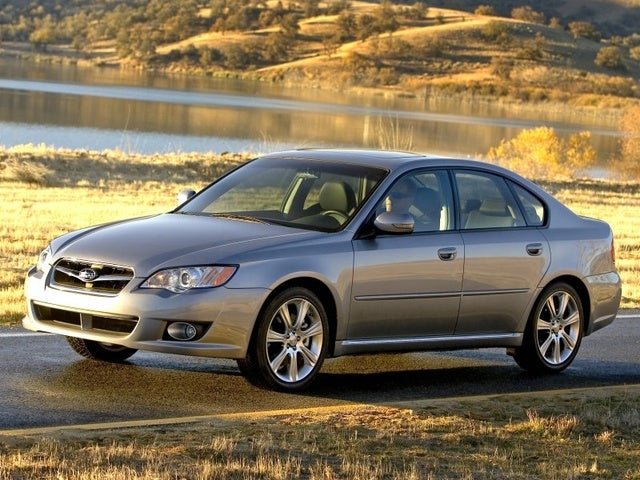 The 2009 Subaru Legacy sedan blends smooth and agile handling with the safety and confidence of its superior AWD power, standard across the lineup.

It can feel a bit cramped inside the '09 Legacy, especially for rear passengers desiring adult-size leg or headroom.

Superior AWD road grip equips the 2009 Subaru Legacy with the ability to handle any road or weather situation, keeping passengers safe and secure. With sportier looks and feel than most midsize sedans on the market, and three engine choices that include a powerful turbo, the Legacy offers a dynamic experience for drivers. However, its lack of passenger and cargo space limits the Legacy's flexibility, and families might want to take a look at the more utilitarian Outback.

The 2009 Legacy sedan shares a platform with the Outback wagon. It sets its sights on drivers who want the safety and security of Subaru's symmetrical AWD, but don't need the extra cargo space or crossover utility.

This midsize sedan adds a new trim to its lineup, the 3.0R, bringing the total to seven, while the old 2.5i Premium gets rebadged as the Special Edition. Three engine choices are indicated in trim names. The regular 2.5-liter boxer four engine appears in the base 2.5i, 2.5i Special Edition, and 2.5i Limited. A turbo version of this engine sits in the 2.5 GT Limited and GT Spec B. Finally, the 3.0R and 3.0R Limited house a 3.0-liter boxer six engine. The low-level trims offer a well-packed starting point of standard equipment, with the Limited versions upping the high-end ante.

Minor additions appear for 2009, as the Legacy gets set for a major revamp in 2010. Stability control is now standard on all but the GT Limited, and all Limited trims feature dual-zone climate control and wheel-mounted audio and cruise controls. An upgraded Harman Kardon sound system comes standard on all but the base 2.5i. The 3.0R Limited gains larger 18-inch alloy wheels, Bilstein shocks, and a sport suspension. 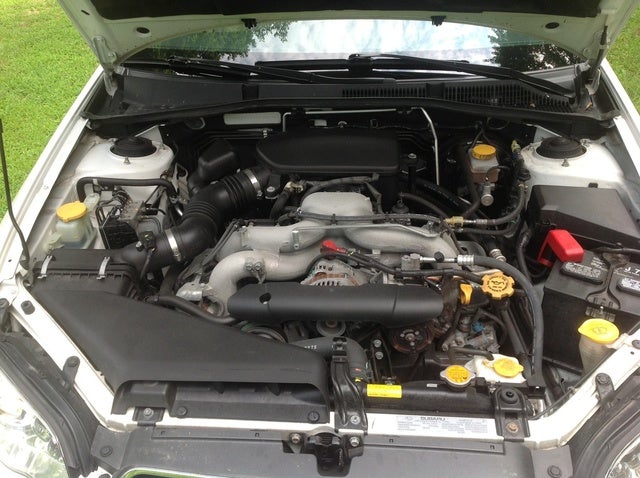 The '09 Legacy line-up offers three engines, including a turbo. All engines are horizontally opposed, intended to improve aerodynamics and keep engine vibration to a minimum. 2.5i trims feature a 16-valve, single overhead cam flat-four engine that delivers 175 hp and 169 lb-ft of torque at 4,400 RPM, paired with either a 5-speed manual or 4-speed automatic. A turbo version of this engine in the GT trims boosts horsepower to 243 and torque to 241 at a lower 3,600 RPM and upgrades the automatic transmission to a 5-speed with sport shift in the GT Limited and a 6-speed manual for the GT Spec B. A slight power upgrade comes with the 24-valve DOHC 3.0-liter flat six, which delivers 245 hp and 215 lb-ft of torque. Its only transmission is the 5-speed shiftable automatic. Fuel economy for all three engines averages in the 17/24 mpg range, a disappointing number for most drivers.

GT and 3.0 trims also feature SI-Drive, which adjusts the electronic throttle response and shift points based on three driver-selectable modes. The economical Intelligent mode, suited for city driving, detunes the engine and lessens horsepower. Both Sport and Sport Sharp mode feed more power and quicker throttle response for a more exciting ride out on open roads.

Those hoping for a more economical turbodiesel option might want to wait until 2010, when the 2.0-liter boxer-four version already sold in Europe comes to the U.S.

Test drives of the 2008 Legacy, virtually the same as the 2009 version, reveal plenty of punch in four- and six-cylinder engines and confident highway acceleration, though there is some noticeable turbo lag in the GTs. Some reviewers point out that the 5-speed manual does require long throws for shift changes, but a short-throw version is available to combat this problem. The location of the paddle shifters on the steering column itself and not the actual wheel feels awkward to some reviewers, specifically when trying to make a sharp turn. However, drivers may still prefer the sportier manual to the 5-speed automatic, which, like many automatic transmissions, tends to switch gears sluggishly.

While not anywhere near as sporty as the WRX sedans, handling in the '09 Legacy feels agile and nimble, yet controlled and smooth, with good driver/road interaction and steering feedback. In fact, '09 Legacy owners give high praise to its dynamic handling, saying the GT and 3.0R trims actually feel more fun to drive than the more sedate Camry and Accord sedans.

One of Subaru's standouts, the symmetrical AWD system, which automatically sends up to 50% of torque to the rear wheels, demonstrates superior road grip and gives drivers an extra sense of security on slippery roads. It consistently earns high marks from owners, particularly those in snowy climates.

The entire '09 Legacy lineup comes equipped with a Macpherson front strut and multilink rear suspension. Both GT and 3.0R trims feature a sport-tuned suspension with larger Bilstein shocks, larger brakes, and a limited-slip rear differential, with the GT Spec B and new 3.0R getting a Torsen version of the latter. These sport-tuned trims exhibit solid firmness without being too harsh, according to reviews of the 2008 version, and all of the '09 Legacy trims offer a fairly quiet ride with good bump absorption, although the turbo version does add a throaty note on acceleration. Moving up to the 3.0's larger 18-inch tires also transmits some added harshness and noise, but nothing too intrusive, according to reviewers.

The interior of the '09 Legacy displays well-thought-out ergonomics, according to many of its owners, and by far the biggest improvement this year seems to be the inclusion of a standard 9-speaker Harman Kardon sound system in all but the base 2.5i trims. It comes paired with a CD player in the base and SE trims, and a 6-CD changer in all other trims. An MP3 input jack allows for iPod connection.

Gauges and controls are easy to reach and generally easy to read, though some critics say direct sunlight can make the displays difficult to read. Standard tilt and telescopic steering aids driver comfort, while bolstered sport seats in the GT trims provide good grip once the turbo kicks in. The use of soft plastics improves overall comfort in the cabin, but some reviewers of the 2008 Legacy expected a more refined interior to match the high price of the sedan.

Rear seats split-fold 60/40 and include an armrest that doubles as a pass-through to the trunk. Where the '09 Legacy pales in comparison to most midsize sedans is in storage space. The trunk holds only 11.4 cubic feet of cargo, comparable to smaller compact sedans. Rear legroom also suffers, with only 34 inches dedicated to passengers, who also must contend with a claustrophobic 36.5 inches of headroom. Taller adults might find their knees forced up with the front seats back. Front passengers are treated much more civilly, with 44 inches of legroom.

Most of the improvements for 2009 focus on the Limited trims, adding more front row convenience and comfort with the standard wheel-mounted audio and cruise controls and dual-zone climate control for driver and passenger. The base 2.5i features remote entry, power windows, locks, and mirrors, and a trip computer, with the SE adding an 8-way power driver's seat. Those wanting more upscale treatment might be drawn to the 2.5i Limited's leather upholstery, heated seats and mirrors, and 6-CD changer. The GT Limited adds sports-flavored accoutrements, including a hood scoop, leather wheel, sport seats, electroluminescent gauges, and a power passenger seat. The 3.0R trims add paddle shifters on the steering column. A navigation system is available for all Limited trims.

Though not yet tested, the '09 Legacy should do as well in crash tests as the 2008 model, particularly with the new inclusion of standard stability control. Its AWD system provides added road grip in wet and icy conditions, while traction and stability control and 4-wheel ABS brakes with electronic brakeforce distribution have helped the sedan earn five stars in both frontal and side impact tests. Dual front-side and side curtain airbags for both rows make it family friendly, and several owners list the Legacy's safety profile as a major factor in their buying decision. A tire monitor and automatic headlights are standard across the line.

Confident AWD power earns the highest marks from owners of the 2009 Legacy, impressed by its surefooted road grip. Owners who live in snowy, slippery climates report feeling safe and secure, knowing that the Subaru AWD system won't bat an eye in inclement weather. Smooth handling, dynamic driveability, and comfortable seats also earn praise. Across the board, the new standard Harman Kardon sound system is a welcome addition. On the downside, drivers seem divided on whether the '09 Legacy could use a power boost and better mpg ratings, and all owners agree that the rear seats and tiny trunk could benefit from extra room.

Early reviews in from CarGurus drivers echo the praise for the sound system, which seems to be the biggest Legacy improvement in the eyes (or ears) of owners. Smooth and easy handling and comfortable seats also top the list of favorites, based on reviews from this year and last. Criticism carries over from 2008 as well, with drivers wishing for a few more horsepower and frustrated with the lack of cabin space.

Have you driven a 2009 Subaru Legacy?
Rank This Car

How Do I Fix My Fan Display That Is Not Lighting?

how do i repair my display that is not lighting

Why Is My Blower Motor Intermittently Turning Off And On.

Blower motor turns on and off intermittently, I replaced it, then the relay, the fuses are good and the heater core hoses are both hot. Coolant is at the hot fill line and goes back down to the col...

25 views with 5 answers (last answer about a year ago)

How Do I Find An Add From Two Weeks Ago

Showing Wrong Gas Mileage After I Accidentally Turned Car Off While Driving...

I accidentally turn my car off while driving about 40 miles an hour and It made a loud thud at the back right of my car. Now my fuel gauge shows the wrong mileage.

2009 Subaru Check Engine Light Is On Solid And Cruise Control Is Flashing -...

My check engine light is on solid and cruise control light is flashing. What does this mean? Can I drive the car?