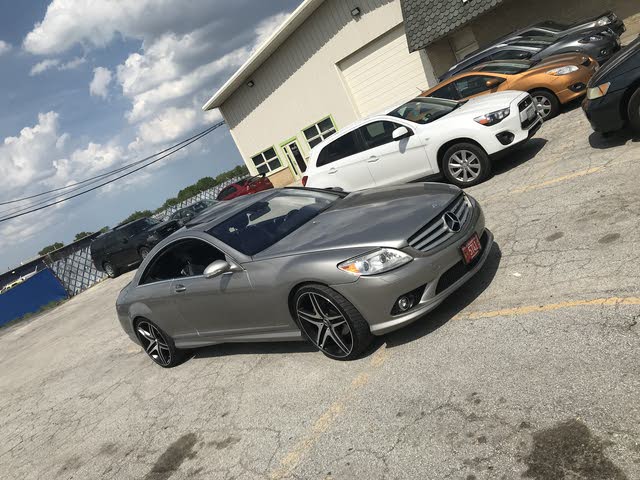 Now in the third year of a redesign that took place in 2007, the Mercedes-Benz CL-Class two-door coupes change little for 2009. The only major upgrade focuses on the 2009 CL550 4Matic Coupe, which receives Mercedes' all-wheel-drive 4Matic system as a standard feature and replaces the previous year's rear-wheel-drive coupe. The 4Matic system provides extra traction on all types of road surfaces and incorporates the automaker's four-wheel Electronic Traction System, which automatically brakes any wheels that are starting to slip and maintains power to any wheel that has traction, even in situations when only one wheel has traction, according to the automaker.

In addition, Mercedes has upgraded the CL-Class's optional Distronic Adaptive Cruise Control system, which it now calls Distronic Plus. When activated, the system uses two onboard radar systems to ensure a safe driving distance from the vehicles traveling ahead. Depending on the situation, the Distronic Plus system can adjust the car's speed up to 125 mph or bring the CL-Class coupes to a complete stop.

Mercedes offers the CL-Class in four trims for 2009, including the CL550 4Matic, the CL600, and the AMG-tweaked CL63 AMG and CL65 AMG. All are rear-wheel-drive vehicles, except for the CL550 4Matic, and all seat four passengers.

Throughout the line, the CL-Class retains its low, wide stance and pillarless cabin, which results in a clean, uninterrupted side profile with the windows opened or closed. Other design features include flared wheel wells, a rakish hood, and a tapered roofline, all of which add to the coupes' sportiness.

A 382-hp, 5.5-liter V8 powers the CL550 4Matic, which serves as the entry point for the CL-Class, despite a sticker price north of $100,000. Moving up a notch, the CL600 retains its 512-hp V12. The CL63 AMG sports a 507-hp V8 and features components tweaked by AMG, Mercedes' in-house tuner, including an AMG sports suspension, AMG-designed sport seats, an AMG sports exhaust system, and a high-performance braking system, as well as AMG exterior styling. The CL65 ups the ante for power with a 604-hp V12, as well as F1-inspired manual shifters for the five-speed automatic transmission, 20-inch AMG five-spoke alloy wheels, and AMG-calibrated Active Body Control.

What's your take on the 2009 Mercedes-Benz CL-Class?

Have you driven a 2009 Mercedes-Benz CL-Class?
Rank This Car

I've just returned from holiday and my car has been parked up for a week. When I try to start it, the lights come on the dashboard, but it will not start. Can someone please advise what to do.......

I'm Looking For A Front Bumper European License Plate Bracket To Install My...