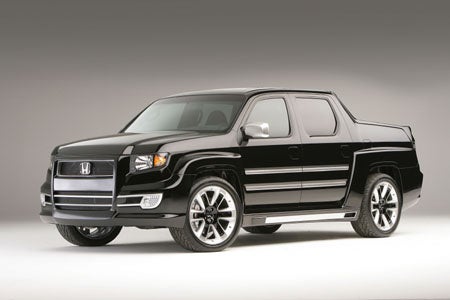 Despite design updates to the Ridgeline's engine and transmission, its fuel economy remains unimpressive at 15/20 mpg, and some reviewers voice concern about visibility problems out the back window and over the shoulder, due to the truck's exterior design.

While the 2009 Honda Ridgeline might not be able to keep up with the big-boy work trucks favored by many in the construction and agricultural trades, it definitely appeals to a certain segment of weekend warriors with families, who appreciate the truck's combination of a smooth, sedan-like ride and cargo flexibility. A redesign for 2009 freshens the Ridgeline's appearance, but the truck's essential uniqueness and functionality remain unchanged, and that's good news for the Ridgeline's many loyal owners and fans.

Introduced in 2006, the Honda Ridgeline won't see a full redesign for a another two or three years. But Honda gave its midsize sport utility truck a mid-generation refresh for 2009, adding more than 50 new features and updates in an effort to provide the Ridgeline with a competitive boost. Outside, the Ridgeline receives a new grille, which mimics the one on the redesigned '09 Honda Pilot SUV, creating a unifying look across both vehicles. Honda also reshaped the Ridgeline's headlights, enlarged the front and rear bumpers, gave the wheel arches some extra flare, and updated the taillights, all of which results in a more masculine appearance, according to the automaker.

Honda also made some minor improvements to the Ridgeline's engine, boosting horsepower and torque slightly. In addition, the automaker adjusted shift points on the Ridgeline's five-speed automatic transmission to improve responsiveness and acceleration a tad. Fuel economy, however, remains unchanged.

Inside, the 2009 Ridgeline sports a new steering wheel, instrument gauges, and dashboard buttons. Honda also adds a new trip computer and equips the Ridgeline's audio system with an MP3 input jack, among other updates. In addition, all trims now come equipped with an integrated Class III trailer hitch. 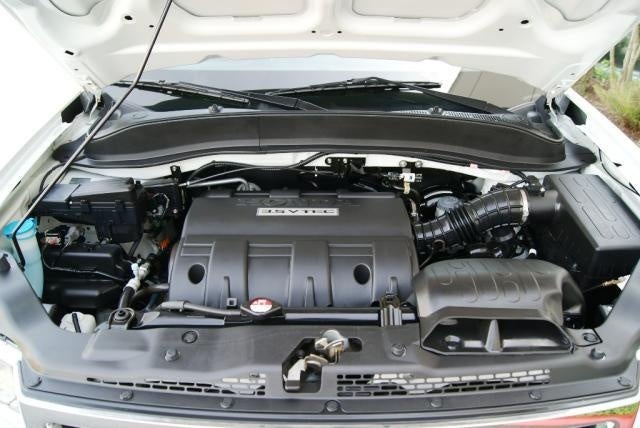 A 250-hp, 3.5-liter, single-overhead-cam VTEC V6 engine powers all Ridgeline trims. Honda identifies the engine as being "high torque," and the engine lives up to the claim, delivering 247 lb-ft at 4,300 RPM, which puts the Ridgeline on par with some V8 trucks, according to the automaker. All that horsepower and torque yield a towing capacity of 5,000 pounds. The Ridgeline comes equipped with a heavy-duty radiator and a heavy-duty transmission cooler, which aid in prolonged towing.

For 2009, Honda boosted horsepower (by 3 hp) and torque (by 2 lb-ft) thanks to a few minor design updates to the Ridgeline's all-aluminum V6 engine. Specifically, Honda made adjustments to the engine's camshaft, intake valves, and intake manifold. In addition, Honda adjusted gear ratios on the Ridgeline's five-speed automatic transmission for improved acceleration. However, despite these updates, Honda was unable to improve the Ridgeline's fuel economy, which checks in at 15/20 city/highway miles per gallon.

The Ridgeline sits on an integrated closed-box frame and features unibody construction, which reduce squeaks and rattles and provide sedan-like ride and handling. The unibody also adds strength and rigidity. Many drivers and reviewers give the Ridgeline good marks for its versatility and quiet, comfortable ride, which helps set it apart from competitive trucks. The Ridgeline has a number of other components that differentiate it from a typical truck, including a four-wheel independent suspension, which helps ensure stability and good handling on rough road surfaces.

Honda's VTM-4 (Variable Torque Management) automatic four-wheel-drive system, which operates in front-wheel-drive mode during normal driving conditions but sends torque to all wheels when needed, provides added stability and grip in slippery or off-road conditions. However, some reviewers don't recommend the Ridgeline for drivers interested in hard off-roading, as the truck can at times feel out of its element when it's off the pavement. For most typical driving conditions, however, the Ridgeline will prove safe, reliable, and sure-footed. For 2009, the RTL trim receives 18-inch wheels, which help improve its ride.

The Ridgeline seats five passengers and gets good marks for its front bucket seats, though some reviewers would like to see better overall seat comfort, especially in the rear seats, which can become uncomfortable over long distances. Interior storage spaces include bins and cubbies in the doors, front console, and overhead console, as well as under the rear seats.

The Ridgeline's 5-foot bed won't accommodate 4-by-8-foot sheets of plywood, but provides enough cargo space for most weekend warriors. A lockable storage space under the rear cargo bed and heavy-duty tie-down cleats add to the Ridgeline's cargo flexibility. A dual-action tailgate, which swings open like a door as well as downward like a regular tailgate, makes it easy to access the cargo bed. Options include a bed extender for motorcycles and a bed-mounted attachment for hauling bikes.

Standard features for all trims include power windows and door locks, cruise control, a column-mounted shifter, and air-conditioning. The RTS and RTL trims add dual-zone climate control and power lumbar support for the driver's power-adjustable seat.

Overall, the Ridgeline's interior features and materials receive mixed comments from drivers and reviewers, some of whom would like to see more high-end materials and improved comfort. Most recommend the top-of-the line RTL trim, which includes a leather-trimmed interior and heated front seats among its standard features.

A six-speaker, 100-watt audio system comes standard in the entry-level RT trim. For the RTS and RTL trims, the audio upgrades to a seven-speaker, 160-watt system, which includes a six-disc in-dash CD changer and a subwoofer. The RTL trim also adds XM satellite radio.

New safety features for 2009 include active front head restraints, which help reduce recoil in crash impacts. As expected from safety-conscious Honda, the Ridgeline earns five stars in front and side crash tests and four in rollovers. Advanced safety systems on all trims include a Vehicle Stability Assist system, which helps the driver maintain control of the vehicle in emergency situations by adjusting brakes or reducing engine power. Other safety features include rollover sensors, a tire pressure monitoring system, dual front-side and side curtain airbags for both rows of seats, and antilock brakes with electronic brakeforce distribution and Brake Assist.

One area of concern remains visibility out the back and over the shoulder, which is limited due to the Ridgeline's side design behind the rear windows.

While reviewers are often mixed in their views of the Ridgeline, due in part to its truck/sedan platform and unique design (which some consider ugly), owners overall give the Ridgeline high marks, and many express a great loyalty to the sport utility truck. Honda's vision of the Ridgeline as a more car-like truck designed for a discerning automotive public seems to have paid off with a specific segment of drivers. In particular, the Ridgeline's midrange size, smooth ride, roomy interior, numerous storage spaces, functional cargo box, and overall flexibility appeal to many owners, especially those with families. Road noise and fuel economy remain concerns for some owners, but most are willing to accept those drawbacks given the Ridgeline's many attributes.

CarGurus drivers like the Ridgeline's power, acceleration, ride, and sedan-like interior comfort. On the downside, some note the Ridgeline's load-carrying capability lacks when compared to trucks from competitors. But the Ridgeline clearly appeals to owners, who like its flexibility and functionality.

What's your take on the 2009 Honda Ridgeline?

Have you driven a 2009 Honda Ridgeline?
Rank This Car

Why Does The VTM-4 And Check Engine Light Come On When You Install A Cold A...

I have a 2009 Ridgeline and I installed a cold air intake. During the test drive it had more power and better gas mileage, but later the VTM4 and Check engine lights came on. Then it started to knock ...

My 2009 Honda Ridgeline died yesterday while I was driving home from work. I was in traffic, so I was probably going less than 25 MPH. I had the car towed to Pep Boys and they told me it was the t...