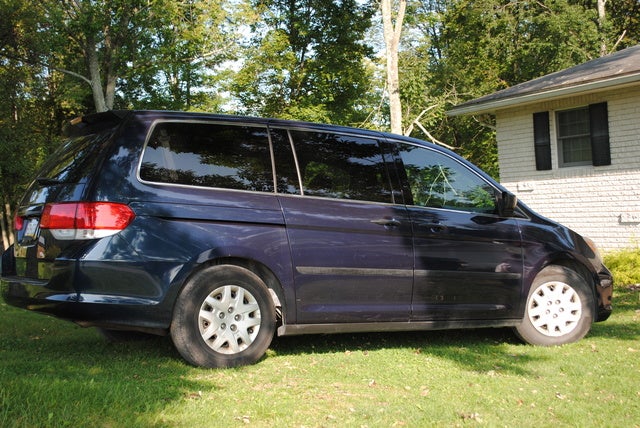 Car-like handling, a luxury ride, and Honda reliability put drivers at ease in the 2009 Odyssey, while its expansive interior and versatile cargo utility also keep families comfortable and happy.

The '09 Odyssey's fuel efficiency doesn't live up to expectations for a Honda, and its brakes seem to exhibit early wear and tear.

Honda's reputation for building reliable and quality cars means even more to parents looking for a safe, solid, and dependable minivan in which to carry their children. The 2009 Odyssey offers these characteristics without sacrificing power, cabin and cargo space, or high-end convenience features. Its combination of versatility, comfort, and fuel efficiency makes it one of the stronger competitors in a crowded field.

Making a dent in Chrysler's dominance of the minivan market, the stylish, angular 2009 Honda Odyssey leaves things untouched this year, awaiting a new-generation redesign for 2010. This compact minivan blends the roomy utility of this type of family hauler with high-quality materials, a comfortable ride, and Honda's exceptional dependability and ratings. Although there's no getting around the Odyssey's minivan personality, its upscale interior and family-friendly versatility help to chip away at the uncool factor often associated with owning this suburban vehicle.

A power tailgate, previously standard only on the top-line Touring, joins the EX-L's equipment list. In the options segment, the navigation system/DVD player bundle adds hands-free Bluetooth to its package. And a revised horsepower rating for the 3.5-liter i-VTEC V6 with variable cylinder management moves up from 241 to 244.

The solid '09 Odyssey comes in four trims, each supremely outfitted with a long list of safety and convenience features. The well-stocked base LX should satisfy any minivan mom, with its power accessories, cruise control, and CD player, but those wanting the ease of power-sliding side doors or a power driver's seat should opt for an EX or higher. The EX-L (the L stands for leather) adds heated leather seats, while the high-end Touring goes for broke, focusing on luxury trappings such as a sunroof, a navigation system, memory settings, and the helpful power liftgate. All trims ride on 16-inch wheels, with the Touring boosting that size to 17. 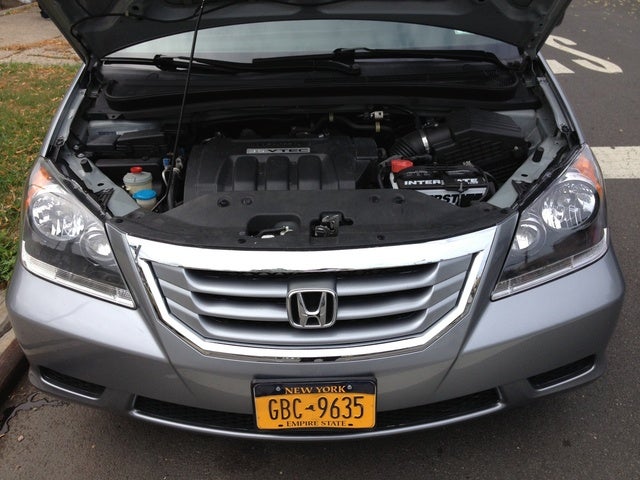 Two engines with comparable mileage ratings are offered in the 2009 Odyssey, the only difference being in their use of Variable Cylinder Management. The base LX and EX come standard with a 3.5-liter VTEC V6, which puts out 241 hp and 242 lb-ft of torque at a high 5,500 RPM. Fuel economy averages 16/23 mpg, with 3,500 pounds of towing power when properly equipped. The EX-L and Touring house an i-VTEC version of this engine, which adds three points to the horsepower and torque ratings, bringing them up to 244 and 245, respectively. The i-VTEC features Variable Cylinder Management, which can deactivate either two or three of the six cylinders when not needed, in order to improve fuel efficiency. Its rating rises slightly to 17/25 mpg. One critic wonders why the more fuel-efficient i-VTEC engine doesn't come standard on all trims.

All trims come with a 5-speed automatic, which most reviewers agree behaves smoothly when upshifting, but feels clunkier and awkward when trying to downshift. The V6 provides good off-the-line acceleration, even when loaded down with passengers and cargo, according to several reviews of both the 2008 and 2009 models.

A smooth, comfortable ride for a minivan seems rare, but Honda claims its Active Noise Cancellation system and Active Control Engine Mounts reduce both road noise and engine vibration in V6 trims equipped with Variable Cylinder Management. This seems to be the case, as most test drives reveal a quiet and shudder-free ride. Only the run-flat tires on the Touring allow excess noise to intrude into the cabin.

The front-wheel-drive '09 Odyssey rides on a fully independent Macpherson strut front and double wishbone rear suspension. This produces a car-like ride with reasonable maneuverability, despite the size of the compact minivan. A soft suspension floats along vaguely, but adds to passenger comfort, absorbing most bumps along the way. Though some torque steer occurs from a standing start, it is not overbearing. Steering in general remains tight and precise, with a surprisingly good translation of road feel to the driver. Brakes do exhibit early wear and tear, but do not require much pressure for a quick response.

The minivan's tallness increases the tendency for body roll, but both the 16- and 17-inch tires offer decent road grip and stability. The Odyssey remains one of the safer and more solid minivans on the market, and several reviewers find it superior to all other minivans in its segment, with U.S. News and World Report ranking it number one out of a field of eight.

The 2009 Odyssey seats seven passengers in three rows, but an optional second-row jump seat adds an extra spot for an eighth passenger, most likely a child. This eight-person setup comes standard in the top-of-the-line Touring, and the jump seat stores inside the floor. Owners of the Odyssey heap loads of compliments on the minivan's interior passenger space and easy access to the interior through sliding side doors (powered in all but the base LX) and a reasonably low step-in height.

Headroom measures 40 inches throughout the cabin, giving both front and rear passengers plenty of space, and second-row passengers get nearly as much legroom as those up front, topping out at 40 inches (40.8 in the front row). The second row can either flip up or be removed, although some test drivers find the removal process cumbersome, requiring two people. Unlike the second row, the 60/40 split-folding third folds flat into the floor. Legroom and headroom suffer back here, and although adults can fit for short trips, children will feel much more comfortable in this row.

Second-row passengers get their own power window controls, and in EX trims and above, they get their own climate controls as well. Reviews find the overall fit and finish of the cabin top-notch, with careful attention to detail and plenty of padding and soft surfaces. Front seats are firm and supportive, but a few critics say the third row lacks sufficient padding for long trips.

Cargo capacity starts at 38 cubic feet and expands to 91 and 147 with the various rows folded down. The cargo area features an in-floor compartment, tiedowns, and bag hooks. A power liftgate comes standard on the Touring trim and is offered as an option for the rest of the lineup. Drivers wish this convenience was standard across the trims. In-cabin storage includes cupholders for each row, various door pockets, an overhead console, and a retractable second-row center tray in the Touring, topped by a lazy Susan.

Drivers sit up high, but some owners complain about the visibility out the front, where the long sloping hood obscures the bumper and makes parallel parking challenging. Rear visibility gets limited by the large headrests in the back rows and thick roof pillars. Tilt and telescopic steering eases driver comfort, and all but the base LX offer a power driver's seat. The Touring adds power-adjustable pedals for maximum comfort. Critics generally find the controls well laid out, and both large and clear to read. However, as you move up through the trims, the addition of more features means more buttons, which results in a cluttering effect on the dash. This takes a while to get used to. Also somewhat awkward, the shifter resides on the dash and can block the view of some controls.

Minivans aim to provide maximum family comfort, and the '09 Odyssey offers a lot of standard features. Those on a budget should be satisfied with the base LX, which offers power windows, locks, and mirrors, remote entry, cruise control, and a CD/MP3 player. Representing a good compromise between cost and value, the EX adds an 8-way power driver's seat, a 6-CD changer with wheel-mounted audio controls, and the power-sliding side doors. Heated leather seats, leather trim, and a sunroof come with the EX-L, while the Touring adds memory settings, a 4-way power passenger seat, a DVD player with wireless headphones, a navigation system, a rearview camera, and Bluetooth. Most of these are available as options for the EX-L. The navigation system gets mixed reviews. Critics find it simple to use, but some owners say the voice recognition system is not reliable.

The 2009 Odyssey earns five stars in all NHTSA crash test categories except rollovers, where it earns a respectable four stars. Owners cite its safety profile as a major factor in their buying decision. Minivans were built for housing everyone's most precious possession – our children – and keeping them safe and secure is every parent's primary concern. All trims feature active front head restraints (to minimize whiplash effect), dual front-side and side curtain airbags for all three rows, and front passenger airbag deactivation.

A tire monitor measures pressure in the 16- and 17-inch wheels, whose average road grip is supplemented by standard traction and stability control. The Touring features run-flat tires. The 4-wheel disc and ABS brakes come with electronic brakeforce distribution. Other equipment includes automatic headlamps and daytime running lights, with foglights standard on the Touring. An optional rearview camera and front and rear parking sensors help mitigate the Odyssey's poor rear visibility and the inability to judge distances up front due to a long sloping hood that obscures the front bumper. These features come standard on the Touring.

Space, space, space. Owners of the 2009 Honda Odyssey love the versatile, utilitarian, and comfortably roomy interior and cargo area. They agree that seven people fit easily into the minivan. Interior finish is complemented by the van's car-like driving dynamics. Despite its size, owners say it handles tightly, with good pickup and maneuverability. Reactions to the fuel economy range from praise to disappointment, with many wishing the Variable Cylinder Management boosted numbers more than it does. Other complaints focus on squeaking brakes that need early repair, while some drivers don't like how the front cupholders obscure some of the dash controls.

Since no CarGurus owners have reported on the '09 Odyssey, reviews of the similar 2008 model should reveal some clues about their reactions. Most drivers like the van's easy handling, but particularly mention its strong safety record as big plus. The power-sliding doors and available DVD babysitter are the top favorite features of the minivan. Many moms, who do not consider themselves the suburban minivan type, deemed themselves converts after driving the Odyssey. The few negatives mention its bland minivan styling and a slight tendency for wind wander when the rear windows are open.

Users ranked 2009 Honda Odyssey against other cars which they drove/owned. Each ranking was based on 9 categories. Here is the summary of top rankings.

Have you driven a 2009 Honda Odyssey?
Rank This Car

Hot Air blowing in driver side vents, cold air in passenger side vents when AC is turned on. Hot air continues blowing through vent when AC unit is turned off. What in the world is going on?

My Honda 2009 Odyssey stutters when accelerating at 45 and then again 55 or so. No unusual sounds. The stuttering stops when I let off the gas. It doesn't do it all the time. Seems when I accelerate...

Can i sale through Cargurus add for my van? it is private sale.

If I purchase private owned vehicle through CarGurus can title / reg be handled on line through you or do we need to go to traditional site for transfer?

Back in June someone tried to break into my Honda Odyssey. It appears they took a screw driver and hammer to my door lock. Ever since then when I double tap the key fob the van will lock but it wo...