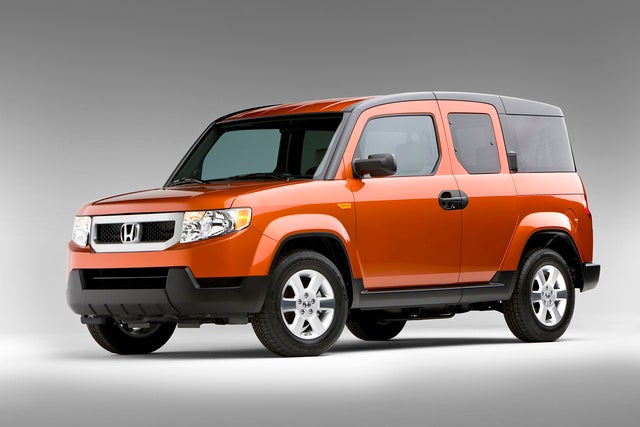 The tall and boxy shape of the 2009 Honda Element provides plenty of versatile and configurable cargo room, suited for weekend travelers and outdoor adventurers.

Utility takes precedence over family-oriented comfort in the '09 Element, and its stiff suspension, bumpy ride, and minimally padded seats can be unforgiving on long trips.

Not designed with soccer moms in mind, the 2009 Honda Element offers plenty of versatility for hauling recreational equipment belonging to seekers of a little more adventure than a trip to the local supermarket. Its compact size hides a spacious and functional cargo bay, and the SUV offers tight handling, available AWD traction, and Honda's reputation for reliability and durability. But its rough ride and bare-bones interior minimize comfort level, and its poor fuel efficiency seems out of step for a Honda vehicle.

Based on the CR-V platform, the functional and configurable 2009 Honda Element returns refreshed and with a few new features. The Element takes to the road with an instantly recognizable tall and square two-box shape, working both as an SUV and stylish van. Both base LX and EX trims are available with either front- or Real-Time four-wheel drive, which automatically sends torque to the rear wheels when it senses slippage. The sportier SC trim comes only with front-wheel drive.

For 2009, the Element gets a facelift, with new head- and taillights. A more horizontal and boxy hood replaces the sloping one of 2008, while bulkier wheel arches and a rounded roofline add a more muscular and aggressive look. The chrome-surround front grille comes straight from the Pilot. New fabric colors, redesigned graphics for the gauges, and faux titanium accents decorate the cabin, which also gets a different console for each of its three trims. A new overhead storage console with three configurable compartments is standard on EX and SC trims. The SC adds unique copper-colored lighting around the gauges, and a carpeted floor replaces the waterproof rubber one in the other trims. The rear skylight has been dropped entirely, but new features include standard Bluetooth and options such as a voice-activated navigation system, rearview camera, and a USB port.

The '09 Element seats four, but features removable and foldable rear seats and a tall roofline that allow for maximum cargo capacity, so big that two mountain bikes can be placed upright in the back. Aimed at a more outdoorsy and youthful market than families, the Element emphasizes utility over creature comforts. Families looking for a more refined and comfortable SUV may want to consider options such as the CR-V or RAV4. Those more interested in grabbing the surfboards or dirt bikes and bringing them for a weekend of fun with friends might find a lot to like in the Element. 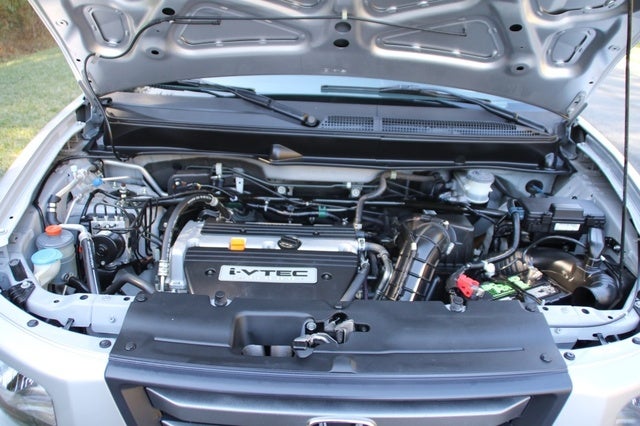 Under the hood of the 2009 Element lies a 16-valve, DOHC 2.4-liter i-VTEC inline four engine that puts out 166 hp and 161 lb-ft of torque at 4,000 rpm. Its variable valve timing reduces emissions, improves fuel efficiency, and achieves low-end torque while maintaining a broad power range. Fuel economy averages 20/25 mpg in front-wheel-drive automatic versions, 18/23 with a manual transmission, and 19/24 in 4WD versions. A choice of five-speed manual or five-speed automatic is available in all but the base LX, which gets the automatic only.

Reviews from owners and test drives reveal an underpowered engine, slow to accelerate, particularly with the automatic transmission. The manual has better luck and makes its transitions smoothly and quickly. Peppy, but not necessarily powerful, the engine feels better suited to city driving. One test drive of a front-wheel-drive version managed 0-60 in 8.8 seconds. Uphill climbs and off-the-line acceleration tax its four cylinders and greatly increase the already loud engine noise. Able to tow only 1,500 pounds, the Element lags behind most of its class competitors in terms of towing power.

With its tall profile and generally boxy shape, the '09 Element doesn't offer the most aerodynamic ride for an SUV, but does exhibit agile handling and car-like maneuverability. This can be explained by its unibody frame, CR-V platform, and fully independent Macpherson strut front and double wishbone rear suspension. The SC, with its sport-tuned suspension, offers an even more controlled wide, minimizing some of the body lean caused by the Element's unique shape. With its small 35-foot turning circle, the Element is ideal in city driving.

In fact, most critics agree the '09 Element performs better during in-town driving rather than on the highway. At high speeds, the SUV tends to exhibit serious wind wander, along with intrusive wind and engine noise. The SC's larger 18-inch wheels also increase the sound level. The engine feels smooth around city streets, yet not quite powerful enough to confidently merge and pass at highway speeds. Steering is nicely weighted with good feedback. AWD models display decent traction on slippery surfaces, along with good tire grip from either the 16- or 18-inch wheels, but several reviewers find the system takes too much time to send torque to the rear wheels. It lacks low-range gearing and should not be used for off-roading.

The '09 Element loses some of its family-oriented SUV cache in overall ride comfort. The combination of the suspension and lightly padded seats transmits every bump in the road straight to the backsides of passengers, particularly those in the rear seats. Although the SUV itself maintains a controlled ride on rougher surfaces, passengers will bounce around considerably, and longer trips will cause discomfort. The stiffer suspension in the SC is even harsher.

The 2009 Element offers a lot of interior space, with removable second-row seats that also fold flat or flip up against the sidewalls to accommodate a range of cargo. Capacity ranges from 25 to 75 cubic feet, and the clamshell tailgate opens wide. The cargo bay features a washable rubber floor. The floor can also be taken out, attached to screw-on legs, and turned into a picnic table. The Element's tallness allows for bikes to be loaded upright, while the fold-down rear seats can be used as a two-person bed when camping. The front passenger seat also folds flat when you need to carry skis, a surfboard, or a piece of plywood.

Stadium-style seating offers good views for rear passengers, and headroom easily accommodates anyone over 6 feet tall, with over 43 inches for front passengers. Legroom is equally generous, at 41 inches up front and 39 in the back, and even with the front seat set all the way back, rear passengers will not feel hemmed in. The reverse-hinged rear suicide passenger doors also open 90 degrees for easy access and loading, although once inside, passengers may find it difficult to close the doors. The wide doors can also be challenging when stuck in a tight parking spot. The seats themselves provide little cushioning or thigh support, and backsides will suffer from the Element's harsh suspension. Rear passengers have the added discomfort of sitting squeezed in between the SUV's wheels, which means every bump can be felt, resulting in a bouncy ride.

Drivers get the extra ease of tilt and telescopic steering in all trims, a dash-mounted shifter, and easy-to-reach gauges outlined in blue light. The SC's copper lighting tends to make the controls more difficult to read, and one test driver notes that the hooded covers on the gauges can sometimes obscure them from certain angles. Wheel-mounted audio and cruise controls come with the EX and SC and are optional for the LX. All trims feature height adjustments for the driver's seat, although reviewers mention that the system does not have many settings.

An emphasis on storage extends to the cabin, with multiple seatback storage pockets, storage bins designed for cell phones and CDs, and a three-bin tray above the glovebox. A new overhead console in the EX and SC features three reconfigurable compartments. Each trim gets its own unique and new center storage console. The LX comes with a basic console, while the one in the EX is removable and doubles as a beverage cooler. The SC's console features an auxiliary audio jack. Water-resistant rubber flooring and stain-resistant fabrics emphasize the Element's utility as both a family and adventure vehicle.

The '09 Element does not boast a lot of gadgets and technology, although several new options offer these creature comforts. Full power features, remote entry, and a 4-speaker sound system with CD player come on all trims, and the more refined EX and sportier SC add a 7-speaker sound system, an MP3 jack, satellite radio, and wheel-mounted audio controls. New options for the EX and SC include a bundled rearview camera and voice-activated navigation system that uses a large 6.5-inch screen and can play MP3 files via a flash-card slot and iPod jack. Bluetooth can also be added for all trims.

The 2009 Element earns an impressive five stars in both front and side impact tests. Not surprisingly, given its tall frame, it fares less well in rollover tests, earning only three stars. The SUV comes well stocked with safety equipment, featuring standard four-wheel disc and ABS brakes supplemented with electronic brakeforce distribution and emergency brake assist, traction and stability control, and dual front-side and side curtain airbags with rollover sensors for both rows. Front airbags feature passenger deactivation, and active front head restraints help minimize whiplash effects in the event of a collision.

A Maintenance Minder alerts the driver when service is needed, and a standard tire monitor keeps track of tire pressure. All trims feature daytime running lights, and the SC upgrades to projector-beam headlights. Thick rear pillars tend to obstruct the view out the back, and owners might want to consider the new rearview camera, which can be added as an option in conjunction with the new voice-activated navigation system, but only on trims equipped with an automatic transmission.

The '09 Element earns rave reviews from owners for its versatility and cargo-hauling utility. Configurable cargo space, water-resistant fabric, and waterproof flooring make it ideally suited for an active lifestyle. Owners also appreciate its simple and basic design, roomy interior, and generally smooth ride and car-like maneuverability. Most, however, find the SUV very uncomfortable on long trips, with passengers complaining of feeling every bump and rut in the road. Drivers seek improvements in engine power and fuel economy (they expect more from a Honda).

CarGurus owners have yet to comment on the '09 Element, but 2008 owners echo sentiments found on other websites. Highlights include the seat configurability and cargo space, interior head and legroom, and the SUV's versatility in being able to carry all sorts of objects – big, tall, long, and large. Its fuel economy earns mixed reviews, with some drivers perfectly satisfied averaging 20 mpg and others wishing for a few more miles per gallon in highway driving.

Guru6XCP If there's one feature of the Element I like most, it's that it seems to disappear under you, especially on long rides. I can drive for 10 hours and never be uncomfortable. So with all due respect to the CarGuru, I'm guessing he hasn't driven one far enough to really appreciate just how comfortable it really IS.

Have you driven a 2009 Honda Element?
Rank This Car

? How Available Will Parts Be For Honda Element Since Discontinued In 2011

thinking of buying Element but concerned about getting parts in future

Can I Bypass The AC With Shorter Belt

Why is this gauge so inaccurate? Always 5-8 degrees low.

Vertical Tube On The Top Of The Transmission Next To The Trany Dipstick.

What is that tube for and should the top be covered to prevent water and debris going down it?

I have a 2009 Honda Element SC. Do I perform a drain & fill or can I have it power flushed. Does the filter need to be replaced?