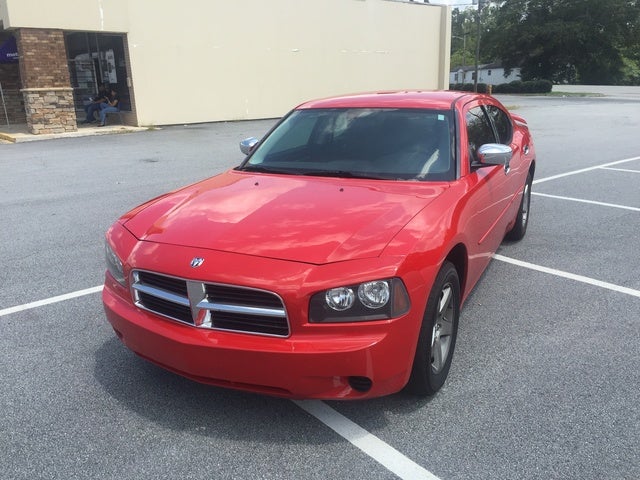 Combining a stylishly retro look with awesome power, the 2009 Dodge Charger offers an affordable muscle car that’s equally comfortable on the road and the track.

Staid interior styling, four doors, and the lack of an available manual transmission with its Hemi V8 engines keep the ’09 Charger from becoming a legend. 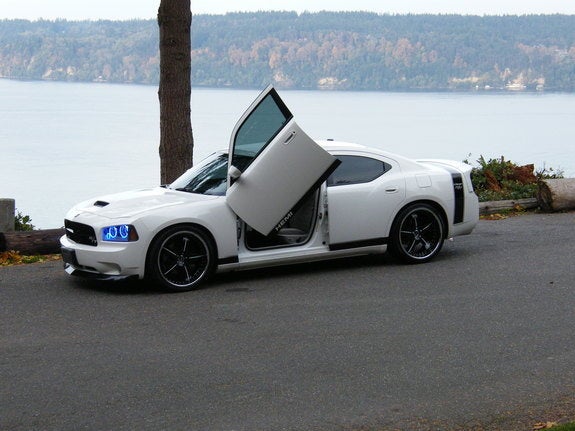 The 2009 Dodge Charger has power and styling aplenty in its higher-end trims. For those who enjoy a few laps around the local race track on the weekend, this is an automobile that memories are made with, despite its four doors.

Re-introduced in 2006 to replace the Intrepid, the new Dodge Charger is, to the disappointment of scads of “Dukes of Hazzard” fans, a four-door family sedan. This sedan, however, has loads of attitude. Regarded by many reviewers and virtually all owners as one of the best looking, most powerful sedans in the U.S., the Charger has become the cruiser-of-choice for police departments worldwide.

A major restyling for the ’08 Charger included a redesigned instrument panel, satin chrome accents, new cloth seating, soft-touch surfaces, and available LED lighting on the front cupholders and map pockets. Dodge has tweaked the Charger a bit more for 2009, giving it re-styled taillights and moving the antenna just over the rear window, and has upgraded the base SE trim by giving it the same interior as the higher-end R/T, which, for ’09, gains satin silver interior accents. Additionally, the R/T gains a bit of engine muscle and higher mileage while the SE loses some of both. Go figure!

A Consumer Guide Auto recommended pick for 2009, the Charger is available in four trim levels: the base SE, midlevel SXT, higher-end R/T, and the top-end SRT8. While both the R/T and SRT8 leave no doubt that the Charger is a serious muscle car, the now less-powerful 2.7-liter-equipped SE is universally described as either “tepid” or “anemic.”

One professional reviewer found the 2009 Charger unique in its four-door, family-sedan configuration with good brakes and available all-wheel drive. Another lauds the Charger’s construction, shared by the immensely popular Chrysler 300. Yet another, however, feels that Charger’s “mail-slot” windows detract from its otherwise potent looks and that its size and weight lead to unnecessarily poor fuel economy. 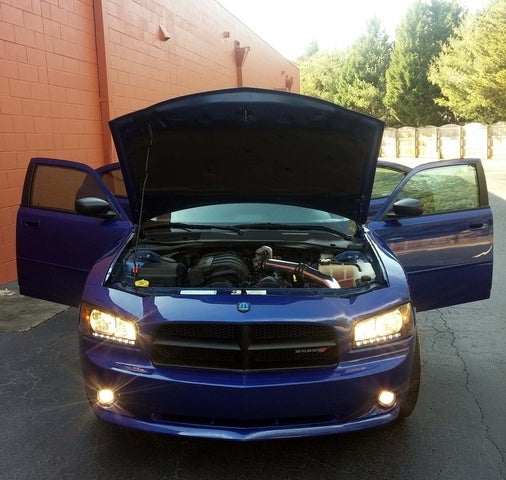 For 2009, the higher-end R/T trim, available in rear-wheel and all-wheel drive, has gained 18 more horses for its standard 5.7-liter Hemi V8 VCT, to 368 hp at 5,200 RPM, as well as 5 more lb-ft of torque, to 395 lb-ft at 4,250 RPM. This extra muscle has the added bonus of increasing gas mileage with the MDS system, which shuts down four of the eight cylinders at highway speeds. The Charger R/T now boasts an additional 7 hp and 10 lb-ft of torque over Pontiac’s competing 2009 G8 GT. A five-speed automatic transmission with Autostick is coupled with the 5.7-liter Hemi and the combo gets an EPA-estimated 16/25 mpg in the rear-wheel-drive trims and 16/23 in the all-wheel drives. The Hemi uses premium gas only.

The Charger SE, available only in a rear-wheel-drive configuration (thus its only qualification for the “Charger” moniker), loses some 12 horses from its standard 2.7-liter, DOHC, 24-valve V6, with no improvement in gas mileage. Combined with a standard four-speed automatic, the 2.7-liter for ’09 puts out 178 hp at 5,500 RPM and 190 lb-ft of torque at 4,000 RPM. The EPA estimates 18/26 for this underachiever.

The Charger SXT, offered in either rear-wheel or all-wheel drive, stands pat with its standard 3.5-liter, 24-valve HO V6 with the Autostick-equipped five-speed automatic. This powerplant puts out 250 hp at 6,400 RPM and 250 lb-ft of torque at 3,800 RPM and is offered as an option for the SE. The 3.5-liter V6 gets an EPA-estimated 17/25 with rear-wheel drive and 17/23 with all-wheel drive.

Also standing pat, engine-wise, is the ’09 Charger SRT8. Available only with rear-wheel drive, this beast packs the 6.1-liter, Hemi SRT V8 that roars out 425 hp at 6,200 RPM and 420 lb-ft of torque at 4,800 RPM. Also equipped with the five-speed Autostick transmission, the SRT Hemi runs on premium fuel and gets an EPA-estimated 13/19. 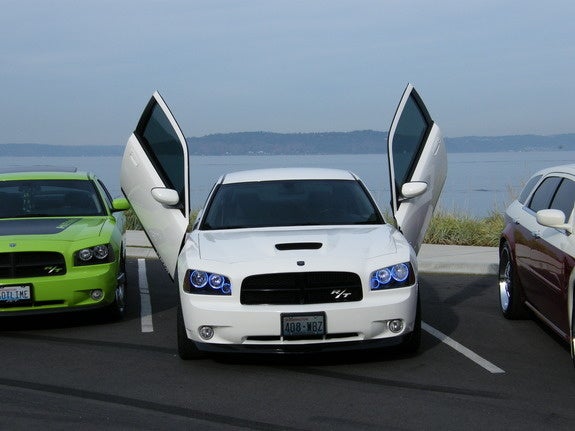 Nearly all reviewers stress that the 2009 Dodge Charger is a heavy, full-size automobile, and thus not as nimble as, say, a MINI. Most reviewers feel, however, that the Charger possesses adequate road skills, though drivers will feel most of the bumps and imperfections in the road. This is especially true with the performance-tuned suspension found on the R/T Daytona trim. 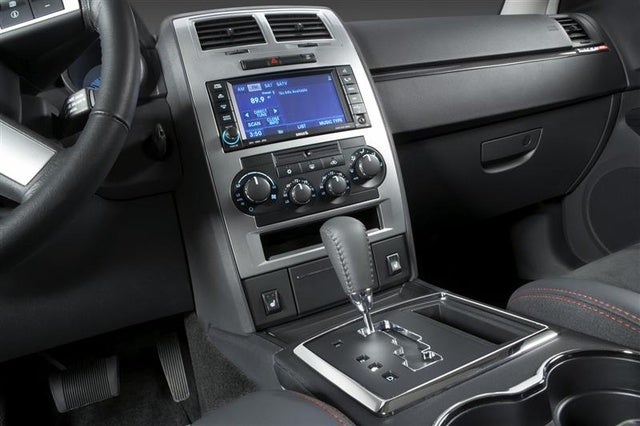 Front seat room and comfort in the 2009 Charger is described by reviewers as adequate, the rear seats as okay for a ride to the track and back, but somewhat cramped for significantly longer trips. Road noise is described by most professional reviewers as about average for its class, though owners of the R/T and SRT8 trims look forward to the rumble of the Hemis on the open road. While the 2009 Charger’s dash is seen as plain by some reviewers and owners, the fact remains that a whole lot of fancy doo-dads aren’t going to impress a serious muscle car enthusiast.

Options for the ’09 Dodge Charger SE include upgraded paint and moldings as well as such safety features as four-wheel disc ABS, the Electronic Stability Program (ESP), traction control, and supplemental side airbags. For the SXT, R/T and SRT8, options include chrome-clad wheels, upgraded audio packages featuring Kicker and Boston Acoustics speakers and subwoofers, suede seat trim, rear-seat Sirius satellite DVD entertainment systems, a power moonroof, and Bluetooth-capable UConnect hands-free communications technology. Buyers of the R/T and SRT8 also may opt for the Daytona Package and the Super Bee Package, respectively. Both packages feature performance-enhanced equipment as well as unique badging and accessories.

The National Highway Traffic Safety Administration (NHTSA) has given the ’09 Charger five stars for front and side impact crash protection and four stars for rollover protection. 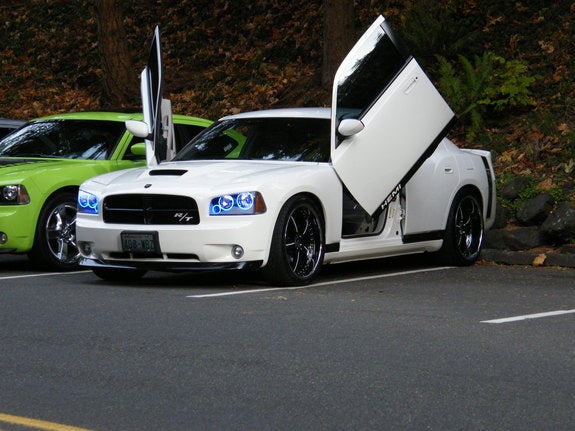 Owners of the 2009 Dodge Charger consider it among the most stylish automobiles on the road, despite some lingering disappointment with its four-door configuration.

A bothersome driver’s-side blind spot owners say takes some getting used to, the lack of an available stick shift for the Hemis, and a rough ride on bumpy roads are the most common owners’ complaints regarding the ’09 Charger. A plain dashboard and the inability to disable the MDS system (for the “sweet sound” of all eight cylinders all the time) also disappointed some owners.

Nearly all owners, however, found the Charger’s looks, power, front-seat roominess, and responsiveness to exceed expectations, with many particularly praising the five-speed Autostick transmission that allows a somewhat synthetic, but nevertheless engaging feel for a stick shift. The Dukes would be proud.

Users ranked 2009 Dodge Charger against other cars which they drove/owned. Each ranking was based on 9 categories. Here is the summary of top rankings.

Have you driven a 2009 Dodge Charger?
Rank This Car

Need instructions on how to replace my alternator in 2009 charger 3.5L

Just curious: Is there any way to transform the R/T AWD into an optional 2WD? Because more than likely, it is just a computer that kicks the AWD in and out when it feels necessary. Any information ...

The dealer can turn the DVD player on or off deepening on the state laws in the state you live So if you live in a state that allows a car to play movies while driving the dealer can program the DV...

2009 Dodge Charger 2.7. I’ve lost power to everything unless my key is in my ignition and turned to the run position. The first turn on position I think doesn’t even work. My key phob will not wor...