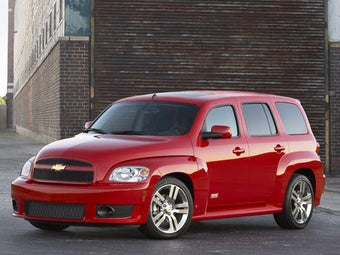 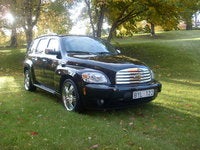 The 2009 Chevrolet HHR gets a wireless cell-phone link and later in the model year will add a rearview camera, which should go a long way toward answering complaints regarding rearward visibility.

The HHR’s styling has always been hit or miss, and this changes little in 2009, as do the car's visibility problems and two engines in dire need of more power, despite a paltry increase this year.

It’s certainly not the best value in its class, but it’s definitely one of the best entrants. The big drawback for Chevrolet's HHR has always been its lack of power and a seriously divisive design. If you dig the retro feel, pick the SS and hang on, daddy-o.

Chevrolet’s Heritage High Roof, or HHR, is a retro compact wagon/hot rod, built on the Cobalt platform. This front-wheel-drive five-seater is also available in a “Panel” version that ditches the rear seats and wheels to target the delivery market. With three available engines across four trims, the turbocharged SS version is newly available in a Panel version and a welcome power increase for that trim.

New for 2009 are a wireless cell-phone link and later in the model year a rearview camera, intended to combat visibility issues that have been noted previously. 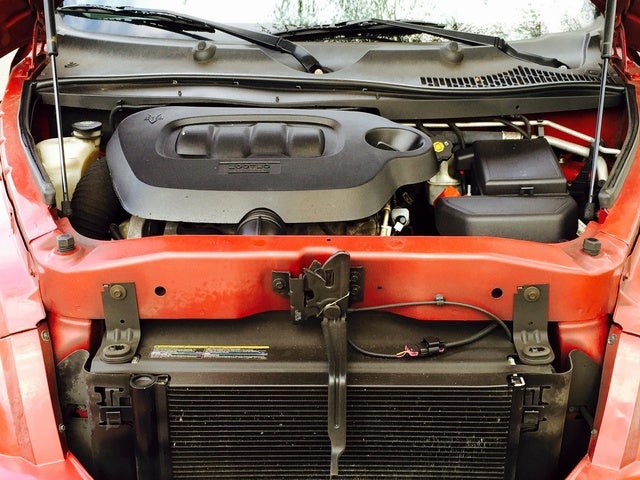 Plenty of upgrades have arrived for the HHR in 2009, including a power increase for the base powerplant and fuel flexibility for two of the three available engines. LS and LT versions come standard with a 2.2-liter, 155-hp four cylinder, which with the 6-hp increase over 2008, breaks the 150 mark for the first time. LTs have the additional option of a 172-hp, 2.4-liter four, and both of these engines are E85 friendly. King of the hill for the HHR is the turbocharged 2.0-liter four that comes with the SS and produces 260 hp when mated to the five-speed manual transmission, although it suffers a 10-hp loss with the automatic.

All but the turbocharged 2.0 have been found to lack adequate power by reviewers, the 2.4 when passing or climbing, and the 2.2 almost universally. However, both transmissions have been praised for being smooth and precise, with the manual having smooth action both in the box and clutch and the automatic allowing the engine to rev throughout the RPM range with ease and downshifting effortlessly when needed.

With three suspensions and wheel packages, starting with the base setup and 16-inch wheels, up through two sport suspensions with either 17- or 18-inch upgrades, the ride quality varies little, surprisingly. Yes, there is some improvement with the sport-tuned suspensions that come with the LT and SS versions, but not enough to warrant exceptional praise, and the general composure of the HHR over bumps and uneven surfaces is retained throughout. In fact, the SS's 18-inch wheels and sport suspension have received particular praise for not delivering a harsh ride, and the electronic stability control is a welcome feature.

All trims lean toward “sporty,” although none inspire particularly spirited driving. Steering, however, is responsive, especially with the SS. Body lean is a small issue, but handled well with the SS, although nose plowing occurs in all trims. The most striking difference between SS and non-SS trims is in pedal feel. While all models stop quite well, the SS provides a pedal firmness LSs and LTs lack.

Chevrolet did something right with the interior of the HHR. Controls are well-placed and easy to see, although some have claimed that their small markings can be at times hard to read. Still, they managed to make copious use of hard plastics with enough attention to detail and texture to avoid appearing cheap. It should be noted that while the modern interior doesn’t exactly match the retro-styled exterior, it doesn’t clash either, a nice blend having been achieved. SS models have a unique interior that also manages to blend well with the overall style of the vehicle, even if it doesn’t exactly match its retro/hotrod aspirations.

High doors and low floors make entry and exit easy, although taller drivers may find themselves wanting more headroom. The slope of the roof means there are some visibility issues, especially to the the rear, and these are obviously exacerbated in panel versions. Interior space is abundant, however. The rear has issues with seating, namely upright seats with too-little cushioning and a lack of headspace under the sunroof assembly, although this is a bit of a moot point, as three adults sitting in the back would be an impressive feat in and of itself.

Panel versions come with no rear seats, as they’re aimed at delivery companies. Additionally, they come with meager floor storage - shallow bins that offer very little versatility with regard to actual storage.

The HHR comes standard with dual front and curtain side airbags, four-wheel antilock brakes, with discs in front and drums in the rear, although the SS upgrades to four-wheel discs. Additionally, all trims come with an anti-skid system, a low-tire pressure monitor, and daytime running lights.

Owners love the fact that Chevrolet has moved the power window controls from the center console back to the doors, although some still have trouble reading the controls. All engines but the turbocharged 2.0 have been criticized as underpowered, but the transmissions have been very well-received. The styling is a major point of contention, with some loving the retro feel and others making the well-founded claim that there’s no such thing as a factory hot rod.

Have you driven a 2009 Chevrolet HHR?
Rank This Car

Keys Won't Come Out Of Ignition

HHR, Lot's Of Miles, Can It Last A Longer Trip?