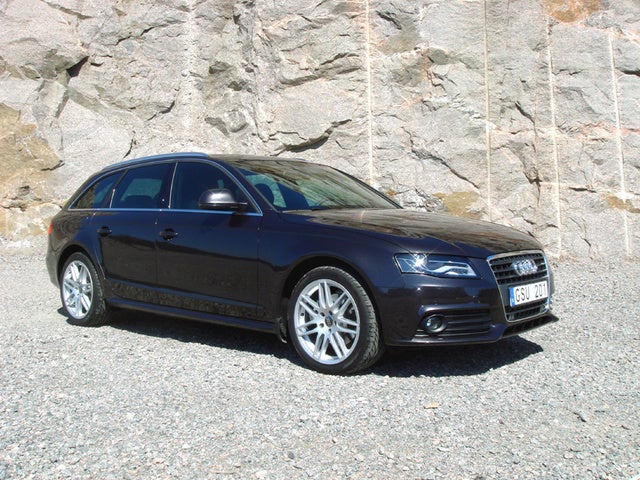 Audi improves its A4 Avant wagon for 2009 in just about every way by giving it a fresh appearance, stretching its overall length, dropping a new turbocharged four-cylinder powerplant into its engine bay, and adding a number of new features and options that make the A4 Avant one of the best-equipped cars in its class.

Despite the A4 Avant's longer platform, cargo space shrinks for 2009, and adding upscale options can make the Avant an expensive vehicle. 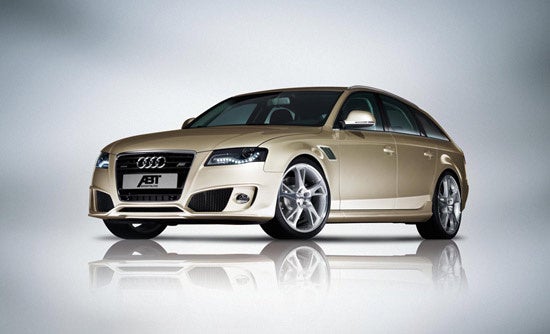 Drivers who seek a more fuel-efficient alternative to an SUV but don't want to give up cargo space will find a good option in the 2009 Audi A4 Avant. Its new turbocharged four-cylinder engine and Tiptronic six-speed automatic transmission combine to provide an aggressive driving experience, while an upscale interior rivals the best of the luxury sedans. Add more than 50 cubic feet of cargo space, and the Avant becomes the right car at the right time for busy families.

Audi introduces an all-new A4 Avant wagon for 2009, with a longer wheelbase than the vehicle it replaces as well as a revamped suspension and a new turbocharged four-cylinder engine. Borrowing styling cues and components from the A4 sedan, which remains one of Audi's most popular vehicles in the U.S., the '09 A4 Avant projects a sophisticated yet sporty appearance, thanks to its lowered stance and longer profile. The new Avant's wheelbase stretches 6.6 inches longer than the previous year's version (it's 4.7 inches longer overall), and Audi widened the Avant by 2 inches as well.

The new Avant features a more rigid yet lighter body than the previous year's version. In addition, Audi moved the front wheels forward in the platform, which improves the Avant's proportions and gives it a more balanced look. The distinctive deep-mouthed grille remains, and Audi has added LED running lights beneath the bi-xenon headlights. With its longer hood, shorter overhangs, tucked-down roof rails, and sweptback windshield, the A4 Avant defines the classy, elegant wagon of the early 21st century.

The '09 redesign results in reduced cargo capacity compared to the previous year's Avant, but that's about the only drawback for the new Avant. Audi has improved the cabin, adding more upscale materials, and added of number of new options, including a panoramic two-panel moonroof, a new parking system, Audi lane assist with a lane-departure warning system, adaptive cruise control, and a powerful Bang & Olufsen sound system, all of which make the '09 A4 Avant a wagon worthy of Audi's symbolic four interlocking rings. 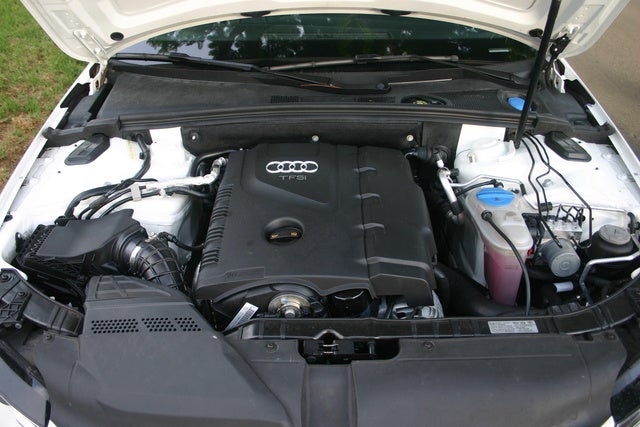 Audi offers the A4 Avant in a single trim for 2009. The Avant 2.0T quattro receives a new turbocharged 2.0-liter four-cylinder engine, which produces 211 hp, an increase of 11 hp over the previous year's powerplant. The new engine employs FSI direct injection and an Audi valve lift system on the intake valves. This results in better fuel economy as well as improved torque, which maxes out at 258 lb-ft at 1,500 to 4,200 RPM and provides brisk acceleration, according to reviewers. In fact, some reviewers note, the Avant's new four-cylinder engine generates more torque than the A4 sedan's V6 engine (258 versus 243, a difference of 15 lb-ft).

The new engine links to a six-speed automatic transmission with Tiptronic, which enables drivers to manually shift gears using paddles mounted on the steering wheel. The transmission also works in conjunction with the wagon's quattro all-wheel-drive system. In combination, the Avant's engine, transmission, and quattro system provide a spirited ride, on par with the performance of the A4 sedan and more than adequate for all but the most demanding drivers.

The Avant's 2.0-liter engine received the International Engine of the Year award for 2008 in the 1.8-liter to 2.0-liter category. Audi recommends premium unleaded fuel for the Avant's engine.

The '09 A4 Avant provides a more balanced driving experience than the previous year's version, thanks to its reconfigured platform and repositioned engine, which now sits behind the front axle, resulting in better overall weight distribution. In addition, Audi redesigned the Avant's speed-dependent Servotronic power steering system for a tighter, more responsive feel. Reviewers note that the A4 Avant handles ably on even the twistiest roads, exhibiting tight road grip and minimal body roll and sway.

Audi has designed the rear suspension especially for the Avant wagon, with a rubber-mounted rear subframe, which helps the wagon better absorb road imperfections. In addition, an anti-roll bar keeps the Avant firmly planted to the road.

The Avant comes in a choice of three option packages - the Premium, Premium Plus, and Prestige. For the Premium and Premium Plus packages, the Avant rides on 17-inch wheels. Prestige package upgrades include 18-inch five-spoke wheels. However, while the 18-inch wheels can help smooth out the ride, they're noisier than the standard 17-inch wheels, some note.

Reviewers highly recommend the optional Drive Select Package, which allows drivers to control the Avant's suspension, steering, transmission, and engine response by choosing from one of four operating modes, including Comfort, Dynamic, Automatic, and Individual. The Comfort mode provides smoother shifting and a softer ride, while the Dynamic mode offers drivers a tighter, sportier feel that communicates more of the road feel. (Some drivers and reviewers do not recommend this setting over rough surfaces.) The Auto setting finds a common place between the two other modes.

Audi's dedication to the quality of interior materials makes the Avant's cabin extremely comfortable for long trips. The wagon's longer profile results in more interior space, and the seats themselves have been redesigned for greater comfort, although some wish for a bit more rear-seat comfort. 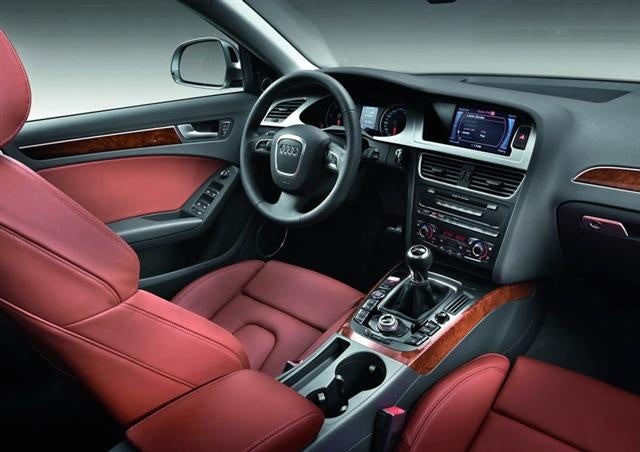 The A4 Avant continues to set the standard for vehicles in its class, thanks to premium interior materials and small details that really count. The dash, for instance, angles slightly toward the driver to make components easier to access and operate. Leather seating surfaces, eight-way power-adjustable front seats, automatic climate control, and a four-spoke leather steering wheel with multifunction controls come standard on the Avant. The Premium Plus and Prestige packages add heated seats and three-zone climate control. Options include interior wood trim and a DVD-based navigation system with voice control and a rear backup camera.

On all Avants, a Multi-Media Interface (MMI) with a 6.5-inch color monitor sits at the top of the center stack between the driver and passenger and displays information about the audio and air-conditioning systems. Depending on the options package, audio systems range from a 180-watt Audi Concert system to an Audi Symphony system with a six-disc CD changer and 14-speaker, 505-watt Bang & Olufsen sound system.

As noted, cargo space in the Avant drops from 59 cubic feet, available the previous year, to 50.5 cubic feet for 2009, due in part to the narrowed rear end and sloping roofline. However, the reversible cargo floor features a carpeted surface on one side and rubberized surface on the other, and small cubbies to either side and an easy-to-use cargo anchoring system help increase the functionality of the trunk space.

The A4 Avant comes equipped with a full range of airbags, including Sideguard head-protection airbags, rear side airbags, and front airbags. Other standard safety features include Audi's Backguard system, which adjusts seats and headrests to protect occupants in the event the car is struck from the rear.

Avants with the Prestige option package include an Audi parking system, which alerts drivers using audible tones that indicate the distance to an obstacle when parking, and Audi side assist, which monitors the driver's blind spots and notifies the driver via an LED light when a car enters that spot. Adaptive cruise control, which monitors the distance to the vehicle ahead and automatically reduces or increases speed to maintain a safe driver-selected distance, becomes a new option on Avants with the Prestige package.

From its exterior styling to its handling to its performance, the 2009 Audi A4 Avant receives stellar marks from most drivers and reviewers. In particular, the Avant's improved handling and balance, thanks to the reconfigured platform, impress owners, as does the Avant's mixture of sportiness and functionality.

In addition, the performance of the Avant's four-cylinder engine draws good reviews from many owners and reviewers, some of whom feel it performs so well that there's little need for a V6 engine. Granted, some note, the Avant can become pricey, especially when optional features like Drive Select and the upgraded sound system are added. But in an era when owners are turning away from SUVs in favor of more realistic and fuel-efficient options, the 2009 Audi A4 Avant seems well-designed to meet those needs.

All of a sudden my A4 Avant (2009, 80K miles) started to sound "whinny" and power decreased slightly. No other issues. Fine in idle or lower gear. No engine light or sensors. No idea!