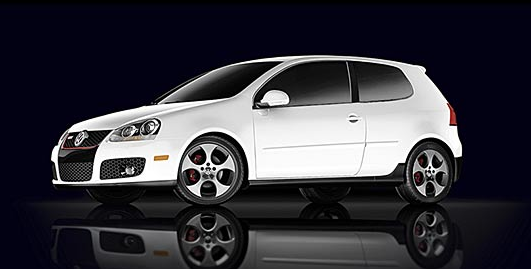 Volkswagen introduced the GTI as an offshoot of the Golf, originally in hatchback form. But after a major redesign in 2006 and the addition of a sedan version the following year, the GTI returns relatively unchanged for 2008. The biggest changes come in the form of SIRIUS Satellite radio and a special edition in Reflex Silver. Otherwise, the GTI sticks to its time-tested formula, offering an affordable, solidly built vehicle. The hatchback has two doors and seats five, and the sedan seats five as well. But beyond the number of doors, you won't find much difference between the two trims.

Both trims feature a turbocharged 2.0-liter, 200-horsepower inline-four engine with a standard six-speed manual transmission or optional six-speed automatic. Their estimated gas mileage is 21 mpg in the city and 29 on the highway. Standard features include air conditioning, power windows, power door locks, a CD player, ABS brakes, traction control, and stability control. Options include a sunroof, powered leather seats, and a navigation system. In other words, the GTI includes basic performance and safety features, but also offers plenty of stylish options to anyone inclined to pimp their ride a bit. Passenger room comes out to a respectable 94 cubic feet, with approximately 15 cubic feet of cargo room.

How do drivers view the GTI? This established model gets solid ratings across the board. It's not super-fast or -smooth, but it offers an overall fun and responsive ride. It offers pretty good interior room and enough cargo room to hold everything you'd need for trips around the city and surrounding 'burbs. While the 2008 GTI's exterior and interior design won't turn too many heads, they get enough respect on the road to tide over most egos. The GTI's already enthusiastic fan base would, however, appreciate the chance to upgrade to a V6 at some point in the not-too-distant future.

What's your take on the 2008 Volkswagen Golf GTI?

Users ranked 2008 Volkswagen Golf GTI against other cars which they drove/owned. Each ranking was based on 9 categories. Here is the summary of top rankings.

Have you driven a 2008 Volkswagen Golf GTI?
Rank This Car

08 VW GTi - cooling fan comes on way after the vehicle is turned off and it'll stay on until the battery dies. I've checked the fuses. Everything is good in that aspect. Just need this little defec...

Electrical Goes Dark And Shuts Off When Ignition Is Turned From ACC To ON, ...

I recently removed my stock radio and hooked up an aftermarket Kenwood radio unit. I thought everything was gravy because the car appeared to be working normally (including the aftermarket radio) wh...

My Golf 5fsi Stalls When The Temperature Is Warm But Doesn't When Is Cold O...

Where Can I Find Information On Volkwagen GTi 2008 Of Why My Lights Go Off ...

Car Dies While Pulling Out Of Driveway, Now When Key Turned NOTHING? HELP!

Dash board only comes on when lights are manually turned on, but even then, only the brights and hazards function but not headlight, wipers, turn signals. Checked all fuses and are all fine. Tried j...