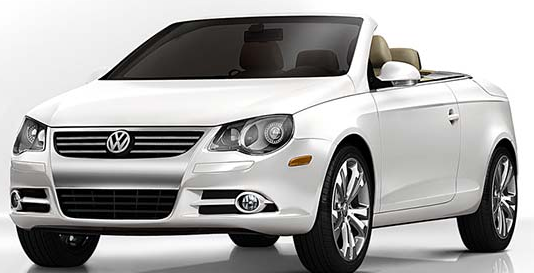 If Volkswagen means "people's car" in German, the foreign carmaker better known for wagons and sedans hopes droptop fans will crown the '08 Eos the People's Champ. This model differs from your typical convertible when it comes to overall design. Perhaps it's appropriate that with a model named after the goddess of the dawn, you can keep the top up and still feel the sun shining down on you with a panoramic glass sunroof.

Volkswagen offers the Eos in four trims and adds a little extra to each one in its second year of production. The Turbo gets optional heated seats, the Komfort and Lux each get 17-inch alloy wheels, and the VR6 gets 18-inch wheels and some fresh flourishes on the grille. All four trims get a little extra leather in the interior.

The Turbo, Komfort, and Lux each have a turbocharged 2.0-liter, 200-horsepower inline-four engine, while the VR6 features a 3.2-liter, 250-hp V6. Gas mileage averages out to around 20 mpg in the city and 27-28 on the highway. Acceleration from 0 to 60 mph takes around 7.3 seconds. The Turbo and Komfort offer an optional six-speed manual transmission or standard six-speed manual, while the Lux and VR6 are available exclusively with the standard six-speed automatic. Like most coupe convertibles, all Eos trims have two doors and seat four.

Overall, the '08 Eos gets a lot of love from its drivers. The hard top provides more safety than a typical convertible, and the sunroof offers a nice view. Of course, owners enjoy putting the top down and taking full advantage of the Eosâ??s smooth handling. Surprisingly, they also like the turbocharged inline fourâ??s power, although some say upgrading to a V6 in future model years wouldn't hurt. Some drivers suggest the '08 Eos could use a little more space in the trunk and interior and note that the carâ??s price can rise quickly with options. Regardless, most drivers don't have much to complain about when it comes to their 2008 Volkswagen Eos, and they don't think you will, either.

What's your take on the 2008 Volkswagen Eos?

Users ranked 2008 Volkswagen Eos against other cars which they drove/owned. Each ranking was based on 9 categories. Here is the summary of top rankings.

Have you driven a 2008 Volkswagen Eos?
Rank This Car

Is There A Way To Play My Phone Music Thru The Mp3 Plug In ?

in the armrest there is a place to plug in a mp3 player. I want to know if anyone knows of a cable I can us to go from my phone to the mp3 outlet ?

VW EOS Convertible Will Not Work, Have Been Told It Might Be A Fuse. Is Th...

2008 VW EOS 2T, The sunroof slides back but the convertible will not work

Need to get my sons EOS home but the turn signal is stuck on. Can not locate a fuse to pull so he can drive it home .

There are 2 cars on CarGurus that I am interested in seeing. I have sent an email on both however, I have no idea where the email is going. There is no dealership mentioned on the "ad". I'm not rec...

How Do Install Egine Air Filter On 2008 Eos