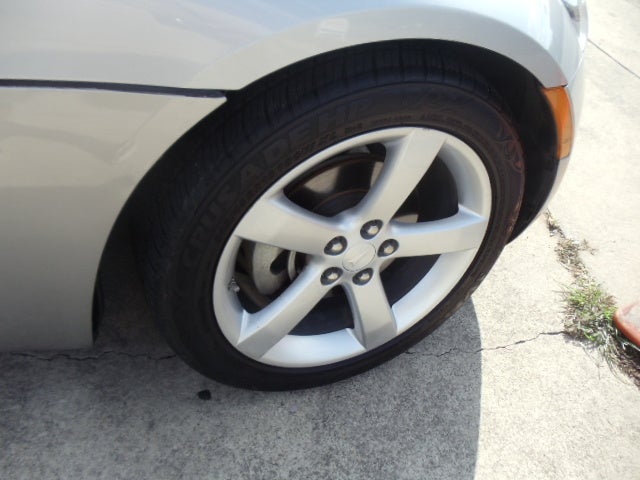 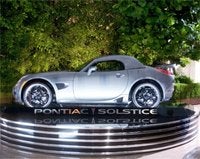 The 2008 Pontiac Solstice's sporty styling belies its low sticker price. With exterior touches more like those of a luxury model than a compact car, this two-seater convertible trumps the Mazda Miata and other competitors in the looks department.

When it comes to performance, though, the '08 Pontiac Solstice isn't quite so stellar. Although the GXP trim offers a turbocharged 2.0-liter inline-4 engine with a healthy 260-horsepower output, reviewers complain that it suffers from unresponsive handling and sloppy control. And the base model's engine, a 2.4-liter, 177-horsepower inline-4, feels underpowered to many drivers.

Another complaint that has dogged the 2008 Solstice is its lack of passenger space. The manufacturer's spec sheet pegs the hip room and leg room in the cabin at a touch over 50 inches, which feels like tight quarters by U.S. standards. (On the other hand, if you have fond memories of the Fiat Spyder or MG Midget, the Solstice will seem spacious in comparison.)

Fuel efficiency is pretty decent, with EPA fuel economy estimates of 25 mpg city, 31 mpg highway. And did I mention the low selling price? Ultimately, that's probably what's going to win people over to the Solstice: It's a great-looking car at a great price, which may be enough to earn it a loyal following.

What's your take on the 2008 Pontiac Solstice?

John I just purchased a 2008 base Solstice. I have owned everything from a Nash Metropolitan (2 actually) to a couple of Sunbeam Alpines (much better car than its reputation suggest)s, a Miata, a first-year BMW two-seater, and a couple og MGBs. The solstice design is superior to any of those (including the miata & the MBW), the handling is immediate, & I do mean immediate, the acceleration even w/out the turbo is impressive. Though it is my favorite among cars like it (Miata/BMW(, it lacks the interior room of the MGB and the trunk space of both the MGB & the Alpine. It needs more stuffing in the bottom half of the seat for us shorter gentleman, & the seat belt must be dug out from behind one, a laborious & frustrating procedure. I don't mind the top so much because part of the reason it is a bit difficult has to do with the fact it is lined -- which I really appreciate in terms of noise reduction. Some one will come out with a nice luggage rack for this car & then that and some improvised interior compartments and all will be well. Driving this car takes attention, so put down the phone (it is blue-tooth equipped) and enjoy. I certainly am.

Users ranked 2008 Pontiac Solstice against other cars which they drove/owned. Each ranking was based on 9 categories. Here is the summary of top rankings.

Have you driven a 2008 Pontiac Solstice?
Rank This Car

L.S. Can You Also Transport To Europe/Holland

Is it possible to transport to Europe/Holland

I'm Unable To Fill The Gas Tank Anymore The Fuel Loads Up At The Top And Sh...

Is There Ever An Opportunity To Have A Vehicle Delivered? Many Of The Vehic...

16 views with 5 answers (last answer about a year ago)

Have An Inquiry And I Answered, But The Fellow Asking Isn't Receiving My Re...

Have an inquiry and I answered, but the fellow asking isn't receiving my replies. I am on the CarGurus website where I see his questions and my answers, but he is not receiving my answers. Does an...