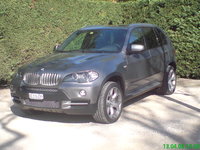 Call the 2008 BMW X5 the ultimate driving SUV, and you wouldn’t be far off the mark. This is a safe, speedy, and sophisticated luxury crossover SUV with seating for up to seven people. 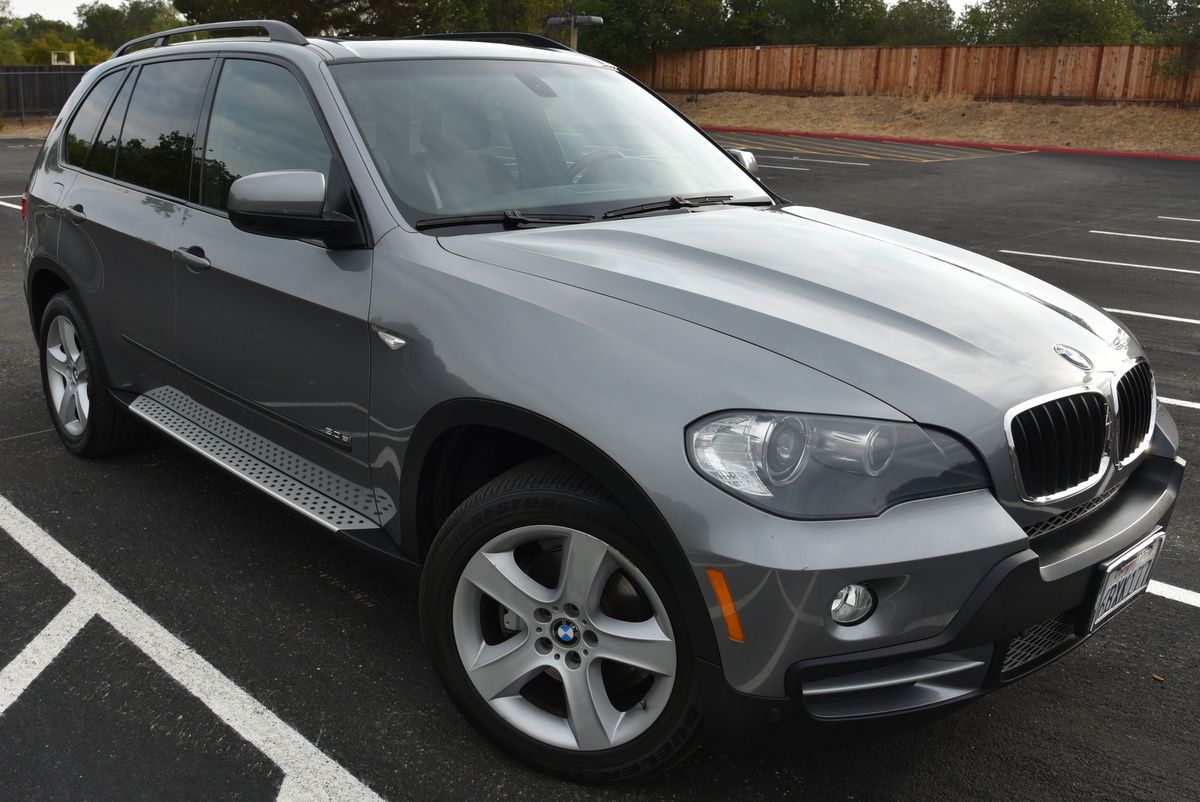 For 2008, the BMW X5 is available in 3.0si and 4.8i model series. Redesigned just last year, the X5 sees few changes for 2008. A power panoramic sunroof is now standard, and a power tailgate is a new option. 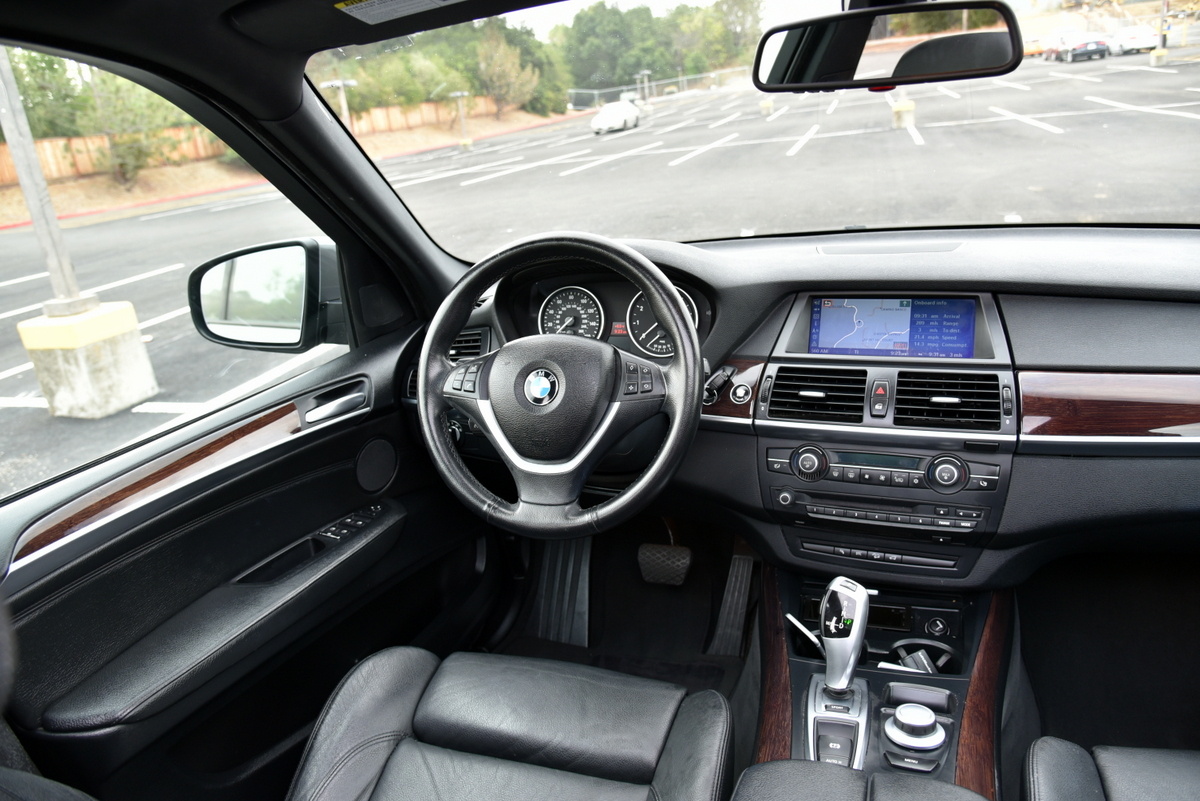 Though the 2008 BMW X5 mimics the design theme and details of the first-generation version of the SUV, this is a larger vehicle with better proportions, and it wears its traditional BMW styling cues well.

If the SUV’s exterior looks all too familiar, the interior is absolutely decadent in terms of its design, materials, and layout. Some controls, however, are highly unusual. BMW’s often criticized iDrive infotainment system is standard, operated using simple controls on the center console. Also, the transmission has a shift-by-wire gear selector that takes some getting used to. 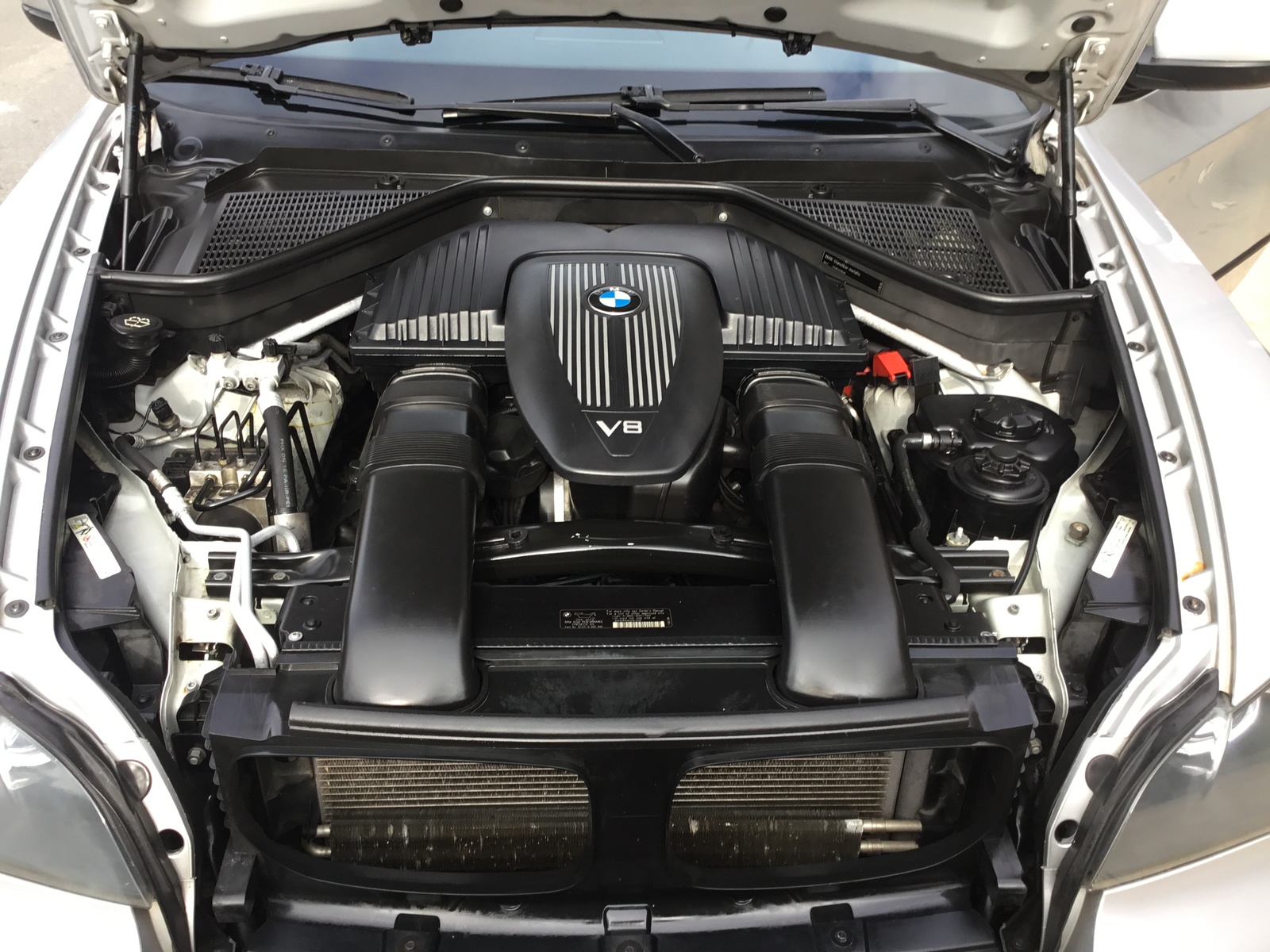 Serving as the X5’s standard engine, a 3.0-liter inline 6-cylinder supplies sweet, creamy goodness in the form of 260-horsepower and 225 pound-feet of torque. It’s paired with a 6-speed automatic transmission and BMW’s xDrive all-wheel-drive (AWD) system.

For more power, get the X5 4.8i. It’s got a 4.8-liter V8 engine generating 350 hp and 350 lb-ft of torque. A 6-speed automatic transmission funnels the power to all four wheels, and BMW says this version of the X5 accelerates to 60 mph in just 7 seconds.

As you’d expect from a BMW, the X5 offers a firm ride quality, athletic handling, and it feels better in your hands the faster you drive it. A key innovation with this generation X5 is a suspension with active roll stabilization and adaptive damping, which manages the SUV’s significant weight and taller center of gravity. This suspension is included in the optional Sport Package, which also equips the X5 with 19-inch wheels.

The X5 is also available with an active steering system. At low speeds, this feature quickens steering response and makes the X5 feel nimbler in urban driving situations and when parking. 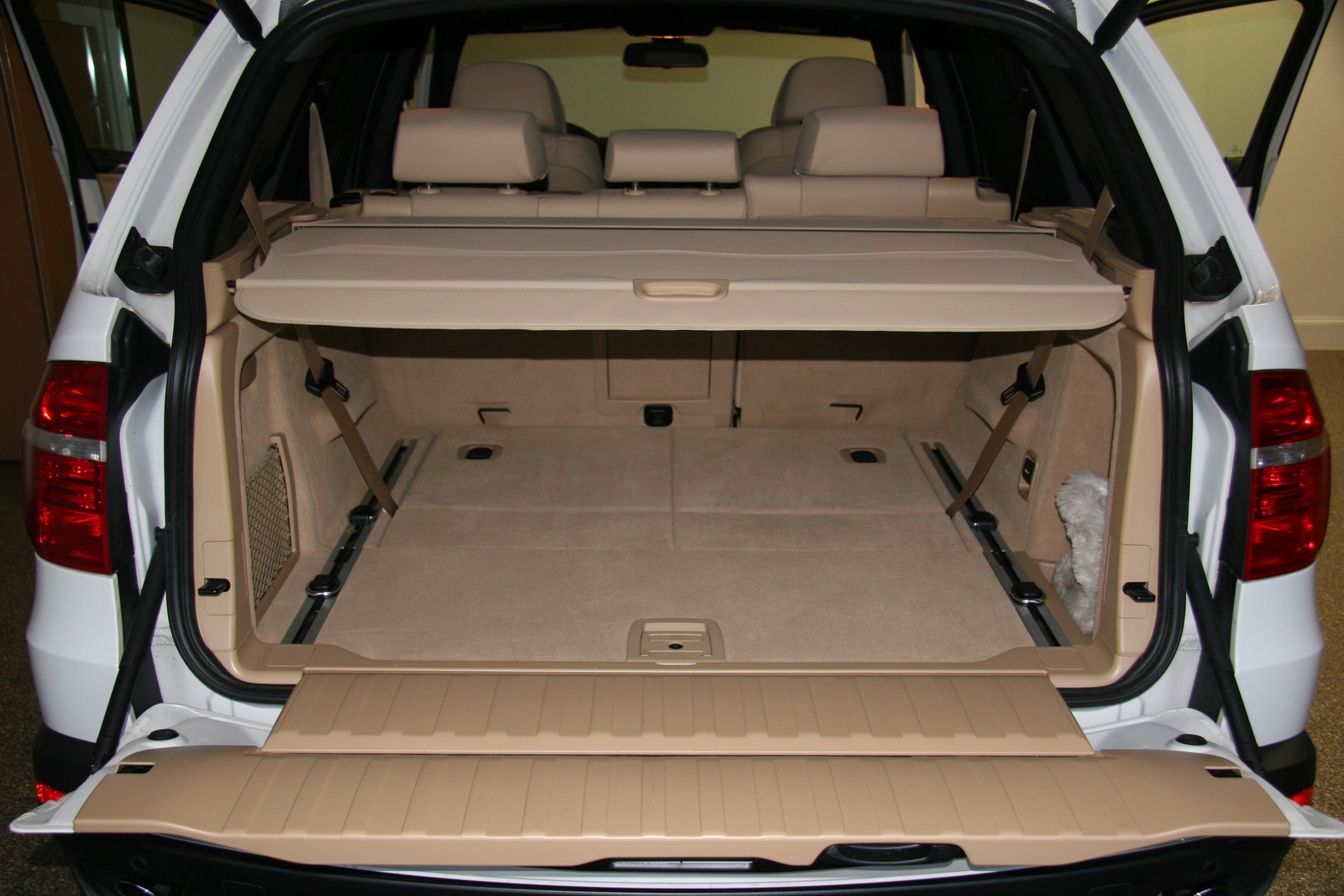 When BMW redesigned the X5 last year, it grew in size, inside and out. The rear seating area was a major beneficiary of this change, and BMW found space for an optional third-row seat. It’s not a good place for adults to sit, but it can carry kids when necessary.

Up front, the X5 is more comfortable than ever. You can even get optional 20-way power-adjustable front seats with heating, ventilation, and a massage function. They’re also wrapped in premium Nappa leather, an upgrade from the optional leather.

Despite its greater size, the X5 still lacks cargo space compared to primary competitors. If you use the third-row seat, cargo space is virtually non-existent. Fold it down, and you’ve got a modest 18.5 cubic feet. Maximum space measures 61.8 cubic feet. 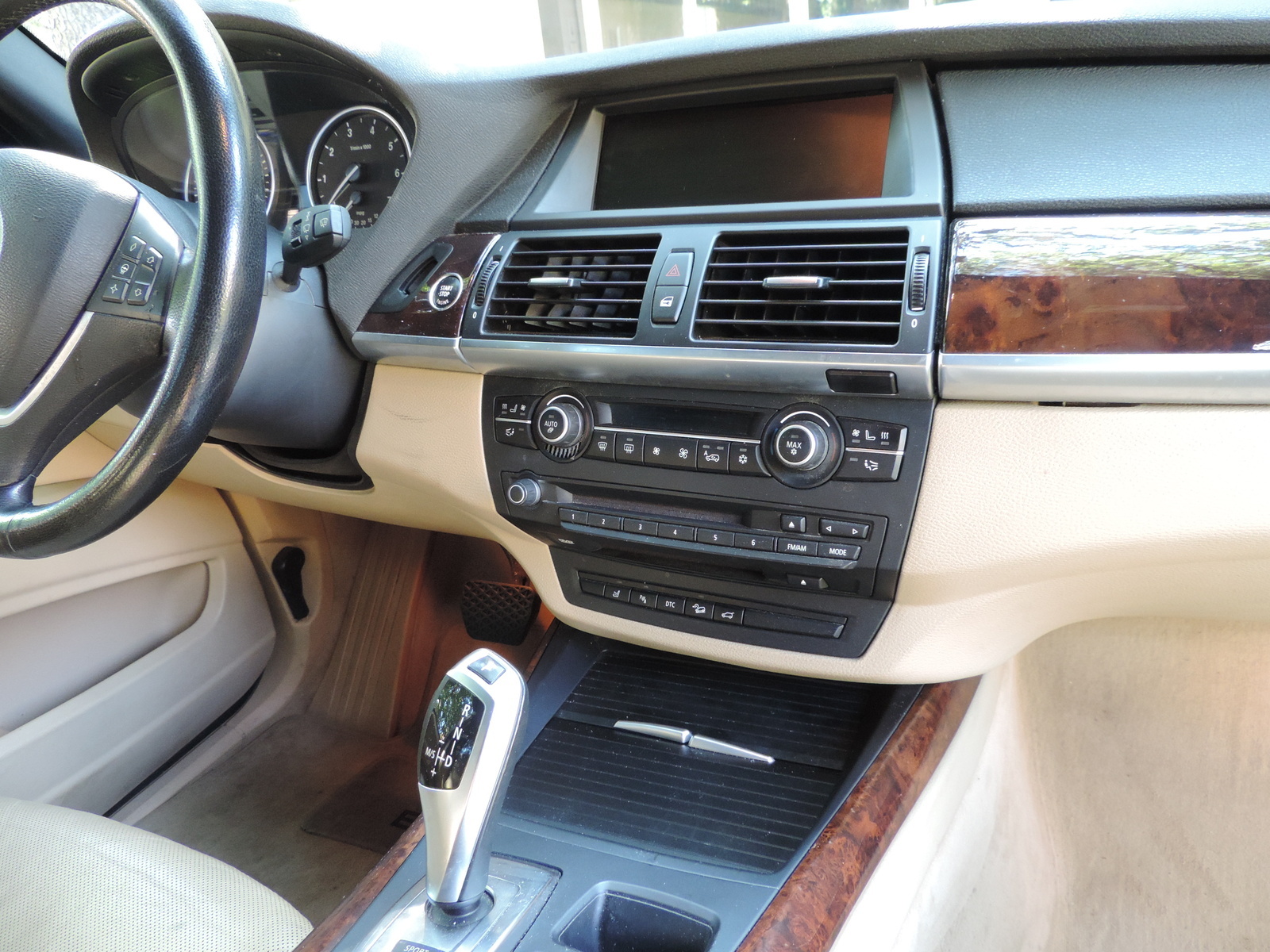 Easily the most controversial thing about the 2008 BMW X5 is its iDrive infotainment system. It’s been around for almost a decade, first debuting in the 2000 BMW 7 Series. But it remains difficult to use, causing confusion rather than simplifying the SUV’s technology. If there is a silver lining, the more you use it, the more natural it seems.

In standard specification, the X5 includes an auxiliary audio input jack, a CD player, and a 12-speaker sound system. Upgrades include a CD changer, a 16-speaker premium sound system, HD Radio, satellite radio, an iPod connector, and a USB adaptor. You can also get a rear-seat DVD entertainment system for this SUV.

An optional Technology Package equips the X5 with a reversing camera, front and rear parking sensors, and a navigation system with real-time traffic reports. 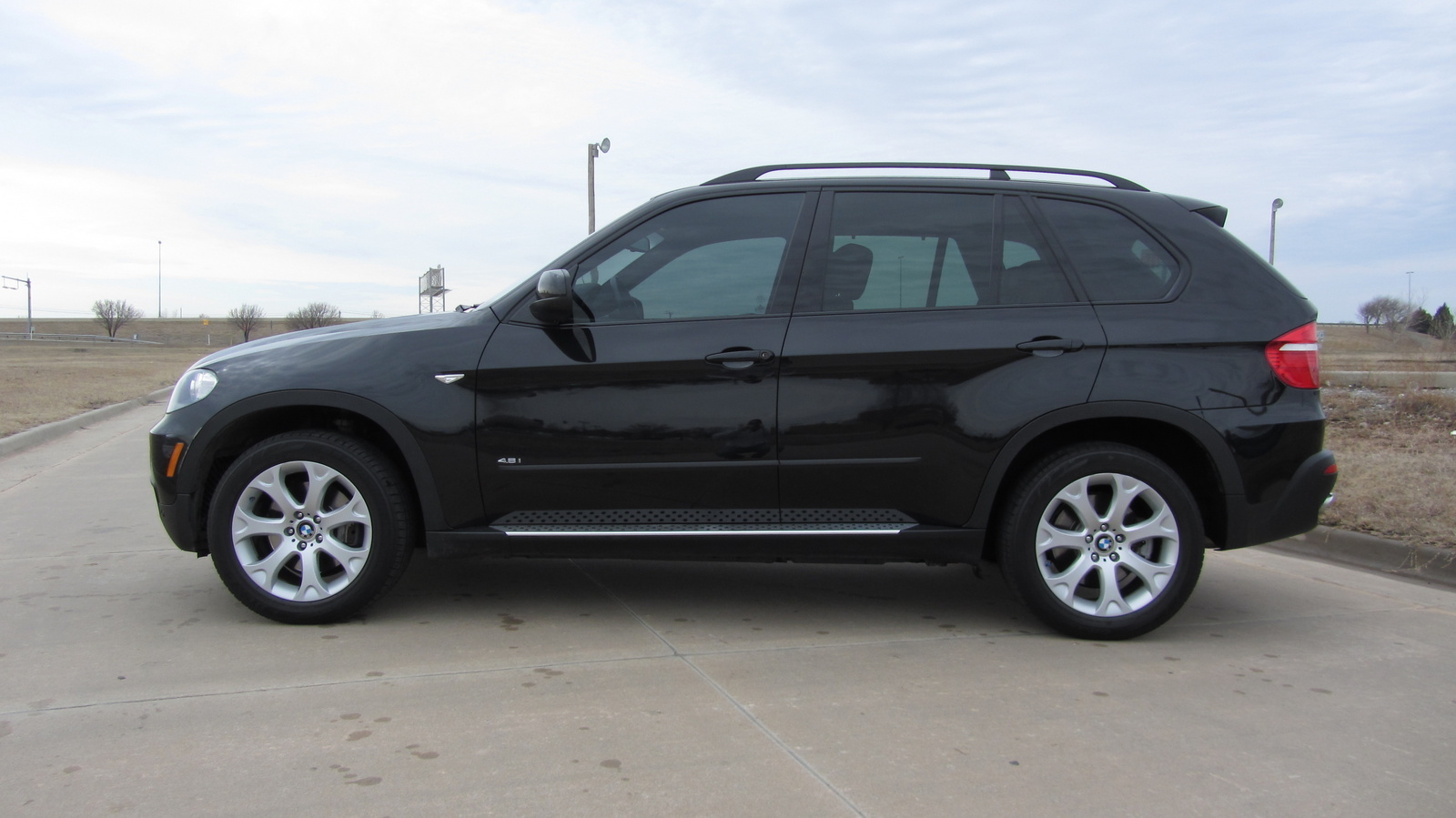 To ensure occupant safety, every X5 has front, side, and side-curtain airbags, in addition to antilock brakes and stability control. Run-flat tires are also standard, allowing you to drive a short distance without any tire pressure in order to find a BMW dealer, a tire repair shop, or a safe place to change the tire yourself.

If you’re involved in a collision, rest easy knowing that the Insurance Institute for Highway Safety (IIHS) gives the X5 a Top Safety Pick rating. The National Highway Traffic Safety Administration (NHTSA) also assigns favorable crash-test ratings for the X5, giving it a mix of 4-star and 5-star accolades. 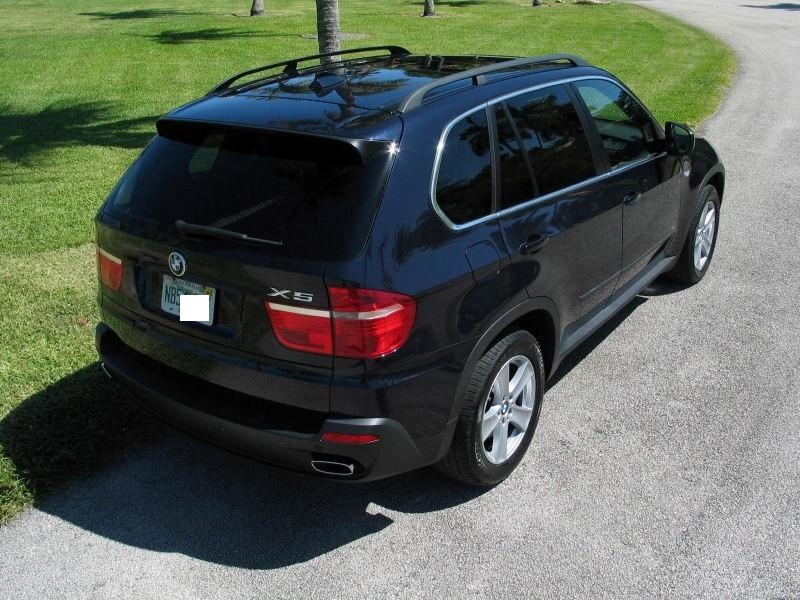 When you buy a BMW X5, you’re paying a premium for a luxury SUV. But in this case, the extra money is well spent. This is a handsome SUV with a beautiful interior, engaging driving dynamics, top safety ratings, and plenty of modern features and technologies. You’ll just need to get the hang of iDrive and the transmission shifter, and also learn to live with its rather cramped cargo space.

Lauren It was mediocre at best for the price, the maintenance that was required on the vehicle once it got older was much for tedious and common than on a Mercedes or Lexus (especially a Lexus). Seats feel like little cinder blocks when you're sitting in them and unless you purchase the v8 then the vehicle will be extremely sluggish and it will experience delays in accelerating at times due to the electronic gearshift. The technology was still fairly new at the time so there were a few gremlins to work out of the system. Vehicle is notorious for burning coolant but all BMWs are. Overall, if you want to purchase this vehicle (this particular body style, at least), I'd recommend a 2012 at the absolute oldest and possibly a 2013 if you want to open up your wallet a little more; just to ensure that you're bypassing a lot of issues that have been worked out from 2008. And on top of that, you're getting the more updated iDrive system so the display will be a little more inviting.

Users ranked 2008 BMW X5 against other cars which they drove/owned. Each ranking was based on 9 categories. Here is the summary of top rankings.

How Do I Upload Photos?

where do I upload my photos? and how many are allowed?

My x5 went in with the slightest rattle, they concluded that the timing was slightly out, so they say they reset it, they put everything back and rea the engine but now the noise is amplified ten fo...

Busterallen77 asked a 2008 BMW X5 4.8i AWD Maintenance & Repair question about a year ago

I have a 2008 x5 4.8l and I noticed it had started leaking oil at first i thought it may be coming out around the filler cap in fact some of it is but upon further inspecting I think it's it may be...

christopher asked a 2008 BMW X5 4.8i AWD Shopping & Pricing question about a year ago

How Do I Ues My Financing

I Get Three Short Beeps In My BMW X5. Happens While Driving Or Stationary....