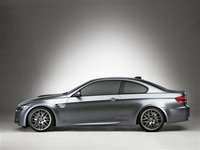 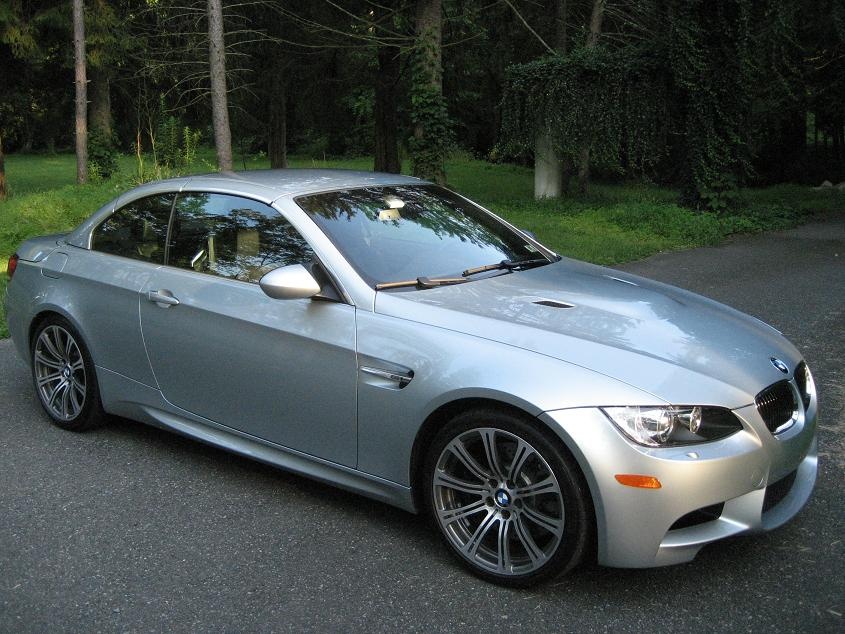 BMW’s redesigned 2008 M3 is available in 2-door coupe, 2-door convertible, and for the second time in the model’s history, 4-door sedan body styles. The coupe features a standard, lightweight, carbon-fiber roof to reduce overall weight and lower the car’s center of gravity. The convertible has a rather heavy and complex power retractable hardtop that chews into trunk space. The sedan, missing from the previous-generation M3 lineup, returns to serve enthusiast drivers who must carry passengers on a regular basis. All three are an absolute joy to drive. 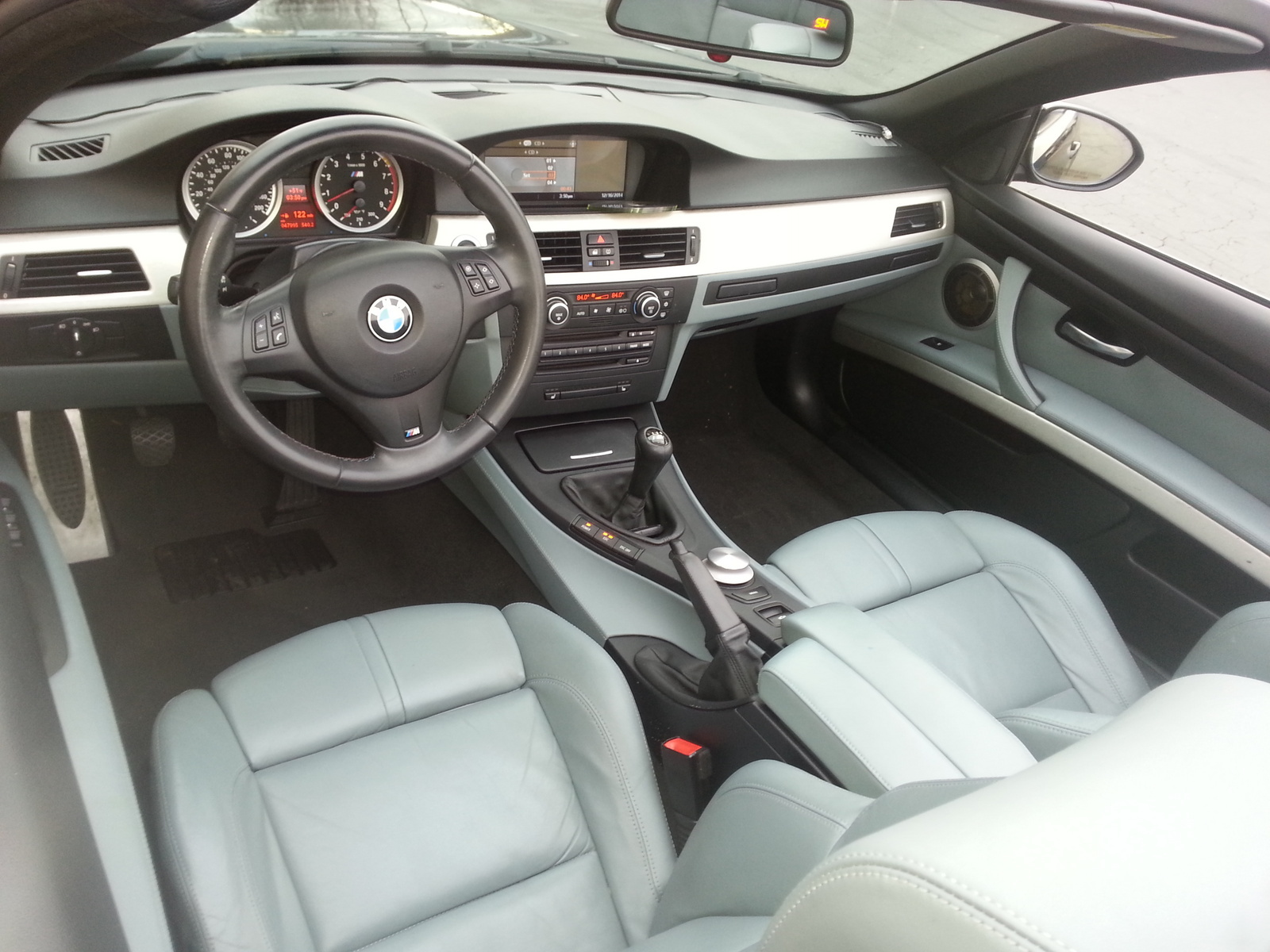 Look past the flame-surfaced design details that have stirred controversy over the appearance of modern BMWs, and note the 2008 M3’s subtle hood swell. It’s not for looks. Rather, it’s necessary to clear the new V8 engine. Additional design features include a subtle body kit including a rear diffuser panel, aero-styled side mirrors, sexy hood and fender vents, quad exhaust outlets, and a tidy lip spoiler. Multiple wheel designs are available, all of them appealing.

Significantly bolstered front sport seats dominate the high-quality cabin, along with a central dashboard bubble that houses the M3’s dreaded iDrive infotainment system. It mars what would otherwise be considered an example of a perfect driving environment: all business in order to maximize pleasure. 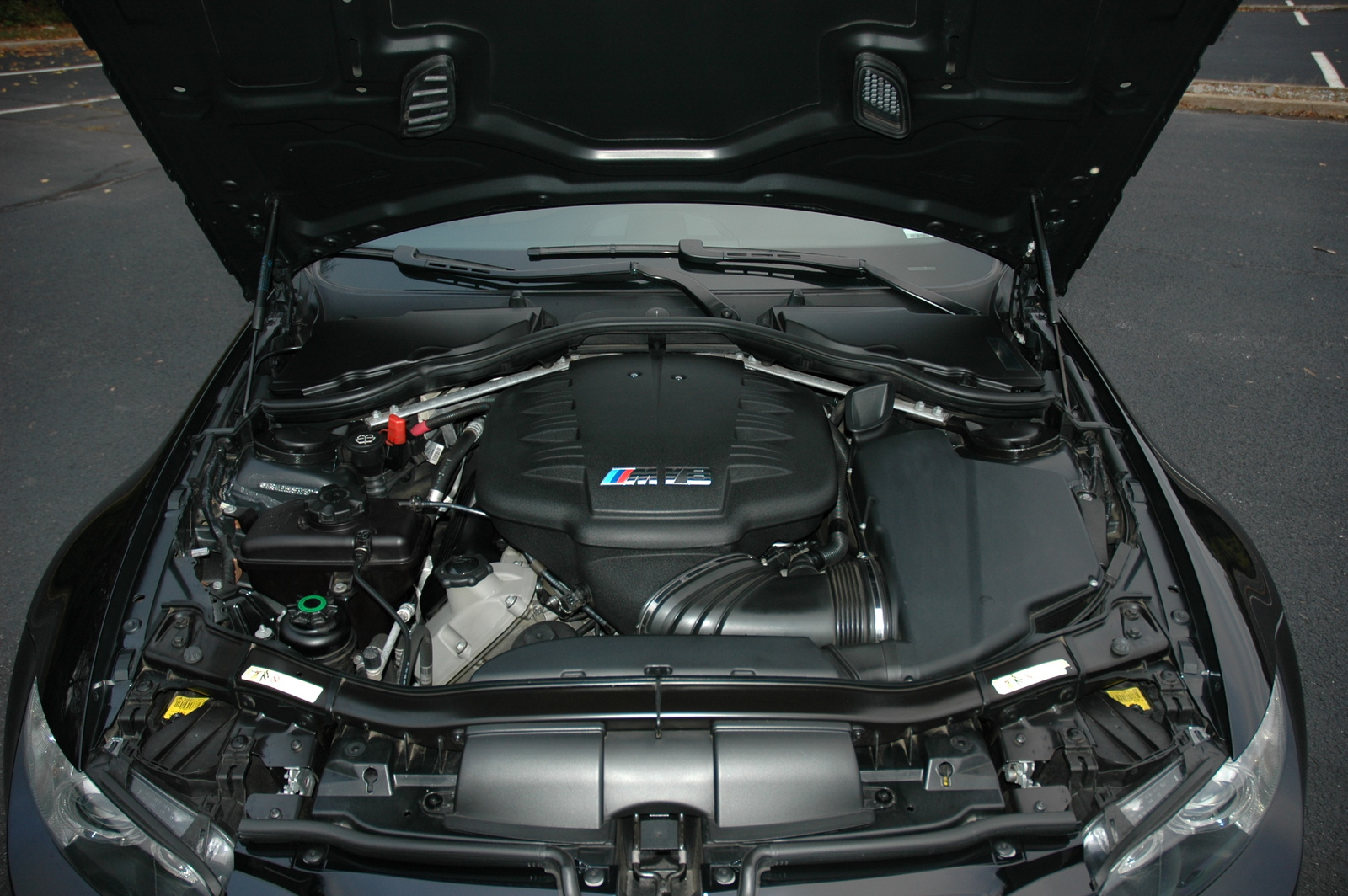 Perhaps the most significant departure from previous versions of the M3 is the engine. The new one comes with a phenomenal 414-horsepower 4.0-liter V8 engine that revs to an astounding 8,400 rpm. Peak horsepower is made just before redline but the engine’s 295 pound-feet of torque is available at a more reasonable 3,900 rpm, at the lower end of what is a flat and usable curve.

A 6-speed manual gearbox is standard, and a 7-speed dual-clutch automated manual transmission (DCT) with paddle shifters is an option. An electronic variable locking rear differential is also along for the shenanigans, helping to get the power down to the ground.

Officially, the M3 coupe with the DCT is the quickest version of the car, rushing to 60 mph in 4.5 seconds. The heavier M3 sedan requires a couple of ticks longer, while the hefty M3 convertible does the deed in about 5 seconds flat. Versions with a manual gearbox require a third of a second longer to get to that speed, and that’s if you’re an expert with a clutch and stick.

As is expected, the BMW M3 gets a full steering, suspension, and braking upgrade, making it the most capable of any 3 Series. Still, in comparison to the previous M3, hundreds of pounds of added weight won’t go unnoticed by the most attuned enthusiast drivers. With that said, anyone new to the M3, or who never drove the E46 iteration, will have an absolute blast while behind the wheel of the 2008 model. 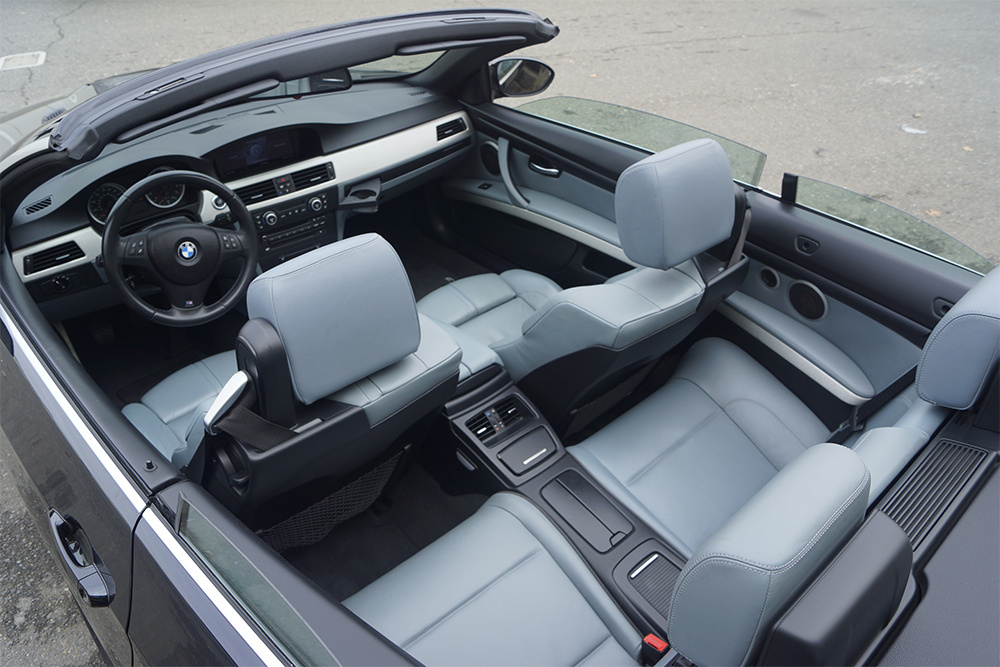 Coupes and convertibles seat four people, two of them comfortably. For 5-passsenger seating, get the M3 sedan.

Leather upholstery is available, and in the M3 convertible, the material is sun-reflective to repel heat when the car is parked with the top down. Though significantly bolstered, the front sport seats are mighty comfortable once you’ve got them adjusted to your preferences. They provide a perfect driving position behind the thick-rimmed tilt/telescopic steering wheel and do a great job of holding you in place when you’re whipping the car through sets of S curves.

For the most part, the controls are laid out in an intuitive manner, with just a handful of quibbles related to climate and stereo system operation. The clunky and unnecessarily complex iDrive technology is another story entirely, and it’s best to get it set up before driving the car and then limit your interactions with it as much as is possible.

Choose the M3 convertible, and you’ll get the smallest trunk, at 9.0 cubic feet. And if you decide to drop the top, the trunk shrinks significantly, since the roof stacks and stores inside of it. For maximum trunk volume, get the M3 sedan, which supplies 12 cubic feet of the stuff. The M3 coupe’s boot is just a bit smaller, at 11.1 cubic feet. 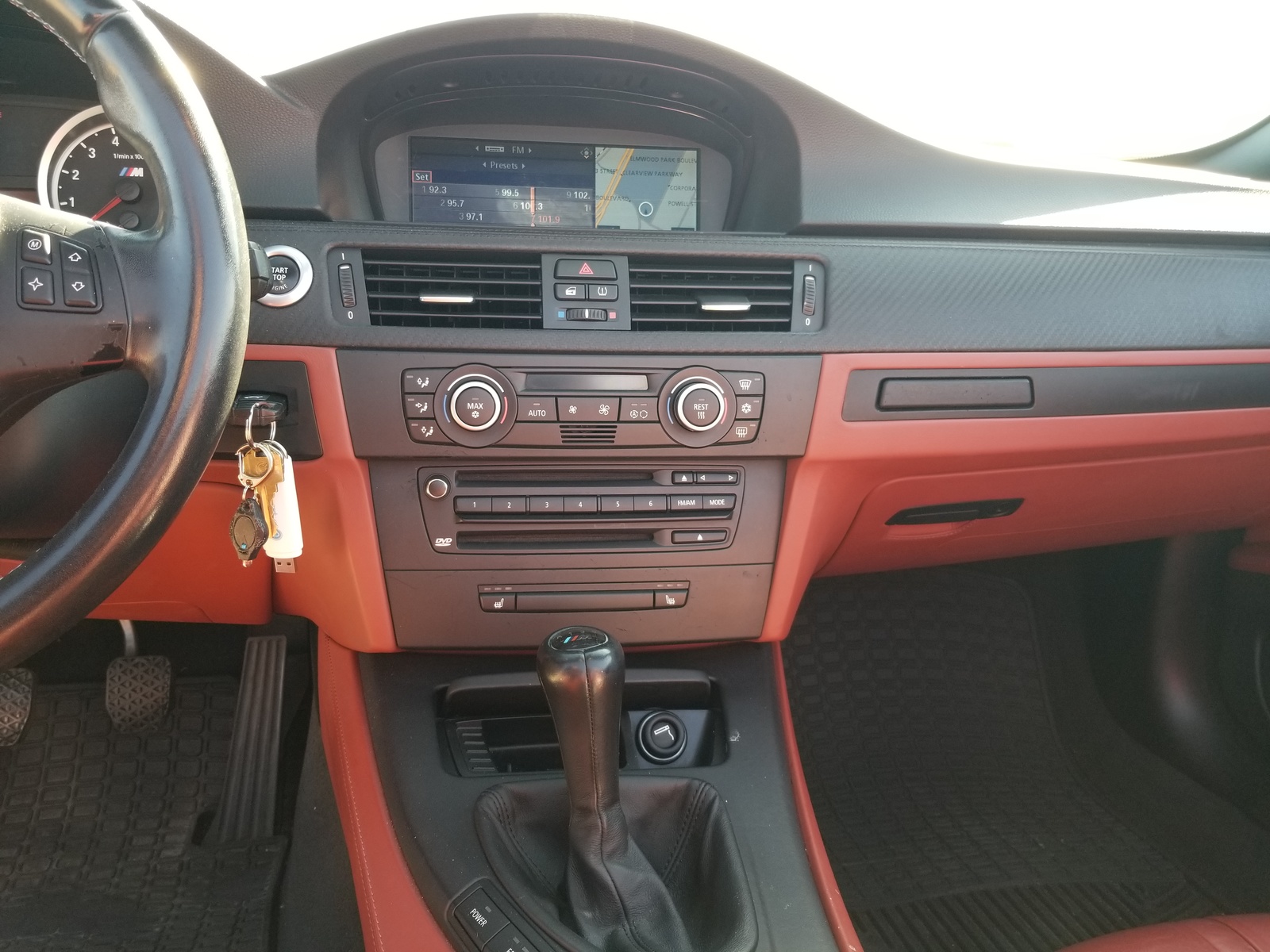 Known as iDrive, BMW’s infotainment system has finally found its way into the new 2008 M3. Given that the stereo and climate controls are separated from iDrive’s display screen and center console controls, you don’t need to interact with it on a regular basis. But when you do, it can be a cause for criticism rather than celebration.

Aside from this abomination, the M3 features a CD/MP3 player, satellite radio, an iPod adapter, a USB audio input port, and 10 speakers. Dual-zone automatic climate control is standard, and the M3 offers remote keyless entry with push-button ignition, a trip computer, a Bluetooth hands-free cell phone connection, and a navigation system with a map that shows traffic conditions.

Additionally, an M button on the steering wheel automatically calibrates the M3’s dynamic settings for specific kinds of driving, and buttons on the center console adjust the car’s adaptive suspension, throttle response, and traction/stability control sensitivity. 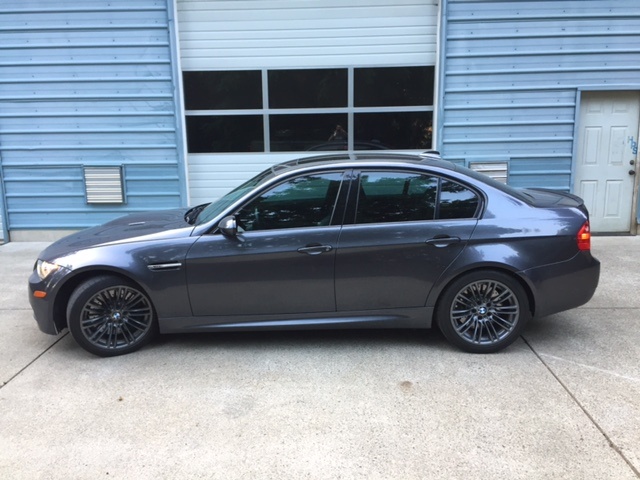 Every 2008 BMW M3 has a full complement of airbags, though convertibles lack the side curtain airbags that are included in the coupe and sedan. Traction and stability control systems are also on-board, and BMW Assist is a telematics service that can call for help in the event of an accident. 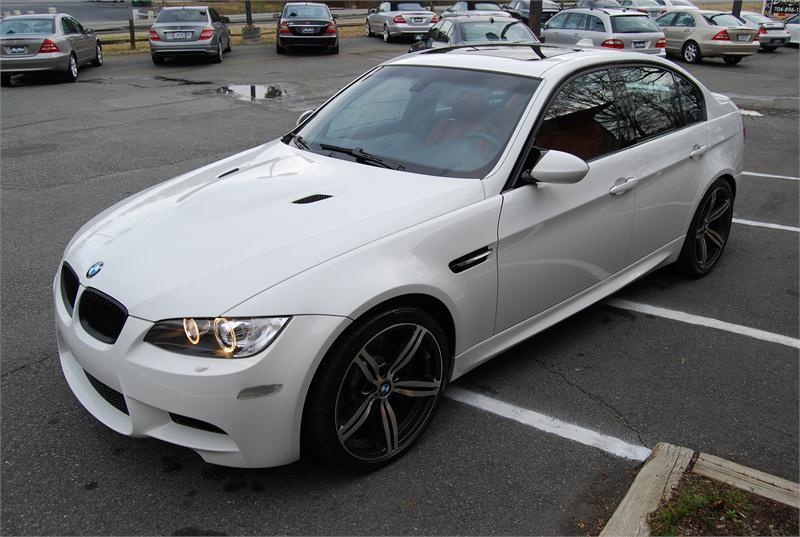 Then again, the real value in M3 ownership resides within the car’s engineering, its exclusivity, and the fact that it’s the best BMW 3 Series money can buy. For people with the means, that’s probably all that matters.

Danny Love these cars German technology at its best

Someone What To Purchase My Car

What is proper process of selling car to buyer

Your Not Allowing Me To Update The Vin In My Listing

Very frustrated as you have my listing twinge in your system as I enter the vin and gets bounced back. Can someone please clean this up so I can enter the the vin to get the records updated? Pleas...

Has my car been listed while it was awaiting verification?! I just found the request for a special picture of my car in my spam box and posted it. Can you please extend my listing for the 30 days I ...

But I don't have a lot of money and I've been told that there is like a obd2 or a specific computer for the car is this true? And if so does anyone know how I can buy one? Thanks