A new nameplate on a new car, the 2007 Toyota Yaris is an entry-level subcompact that replaces the reliable but reliably awful Toyota Echo. 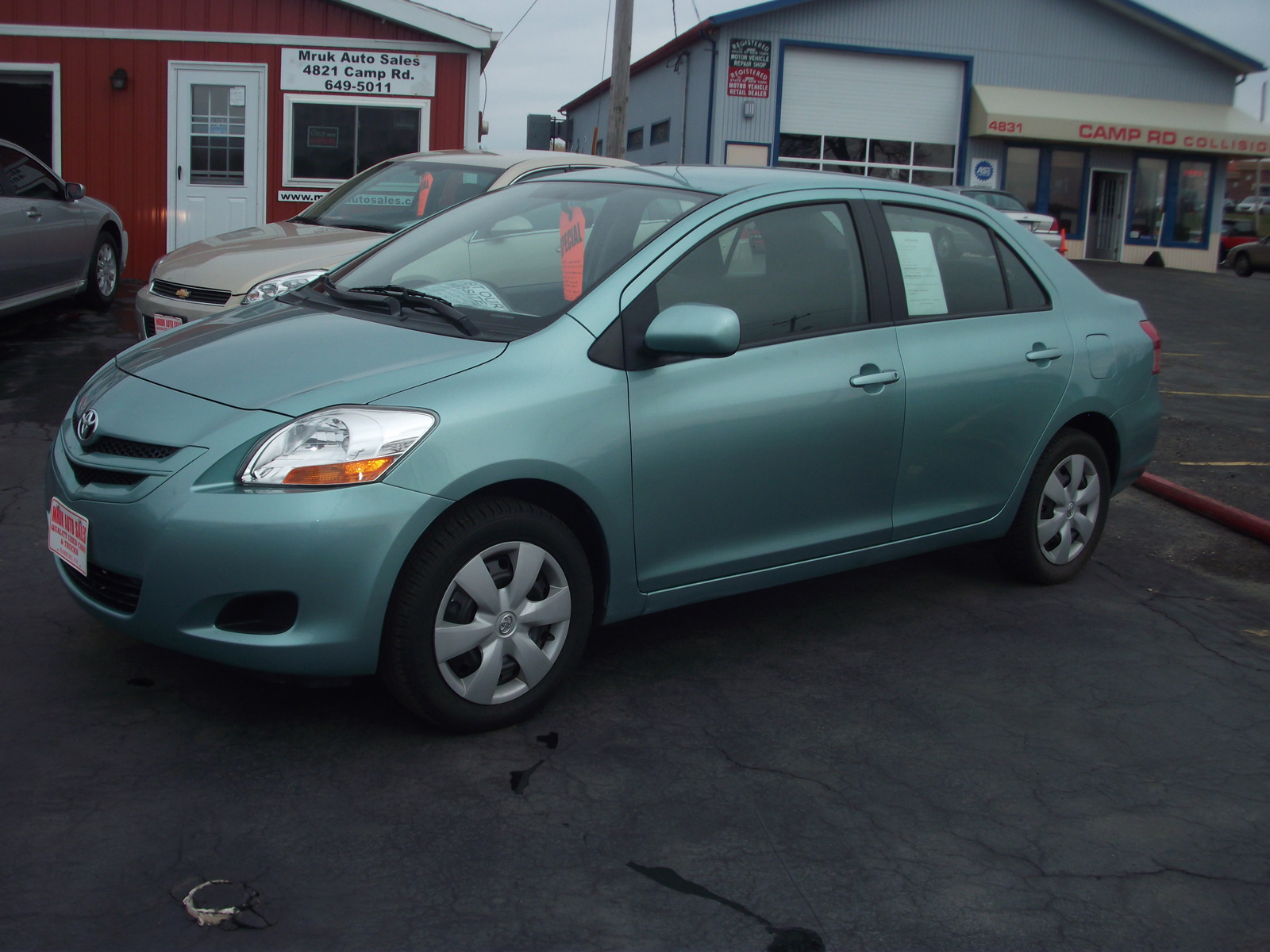 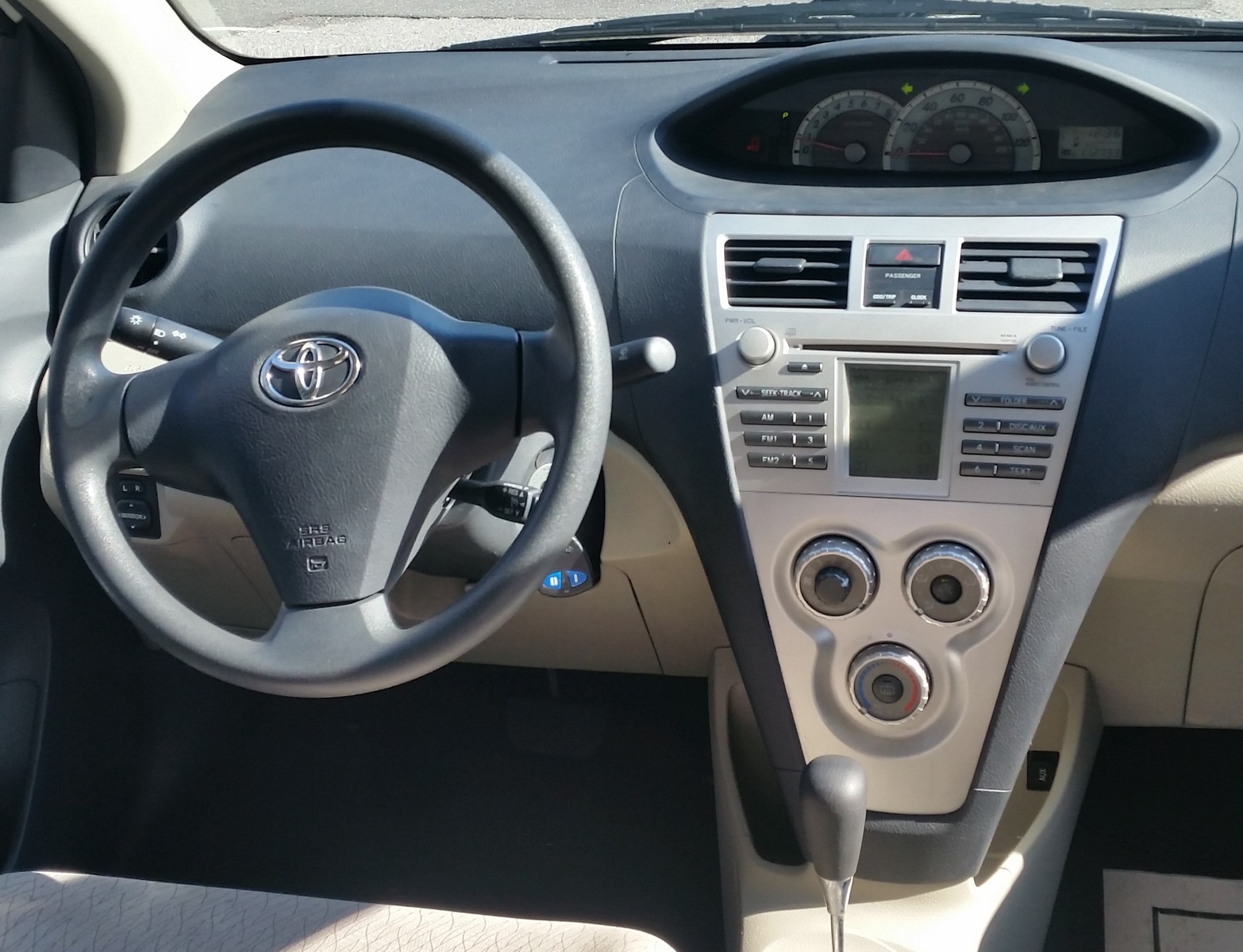 Compared to the cartoonish Echo, the 2007 Toyota Yaris is a stylish, swanky, and sophisticated machine. Yeah, that doesn’t say much for the old Echo, does it?

At the same time, the Yaris wades into a subcompact car segment full of compelling choices. From the practical Honda Fit and roomy Nissan Versa to the stylish Mazda Mazda2 and entry-level econoboxes from Hyundai and Kia that come with killer warranties, people in need of cheap wheels have plenty of choices.

The new 2007 Yaris, offered in wide-eyed 3-door hatchback (called Liftback in Toyota-speak) and more conservative 4-door sedan body styles, is inoffensively styled. The sedan even comes in an S trim level with the requisite alloy wheels, body kit, and rear spoiler. So racy!

Toyota installs two different dashboards in the Yaris. Liftbacks get stacked controls beneath the center air vents, while sedans offer a V-shaped waterfall collection of stereo and climate controls. Both feature a pod mounted atop the center of the dashboard that contains a speedometer and a fuel gauge.

With center-mounted instrumentation, the Yaris echoes the old Echo. In fact, in either version of the Yaris, the dashboard looks like you could swap the steering wheel and pedals from the left side to the right in order to accommodate Japan and UK markets. It takes some getting used to, but eventually, the arrangement becomes second-nature. 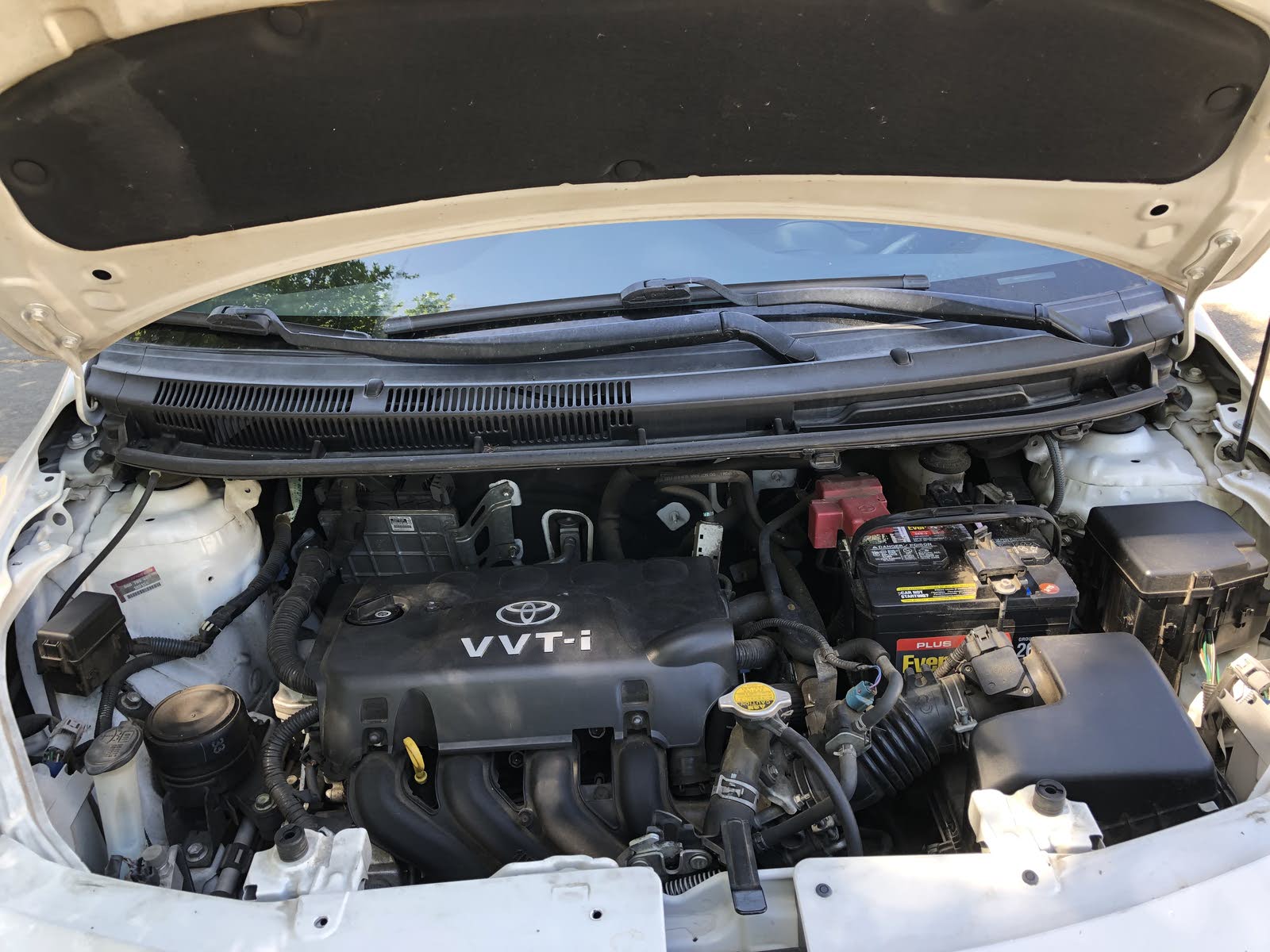 With 106 horsepower and 103 pounds-feet of torque, the new Yaris isn’t going to win any drag races. At least the 1.5-liter 4-cylinder engine is sewing-machine smooth, and the standard 5-speed manual gearbox is a model of refinement. A 4-speed automatic is an option, and it dents what little performance is available.

As is expected in an entry-level vehicle, the engineering is basic. The suspension includes MacPherson struts up front and a torsion beam solid axle in back. Brakes are discs in front and drums in back. Power-assisted steering is standard, a seeming luxury.

In spite of rather simple mechanicals, the Yaris is decent to drive. The engine benefits from the car’s low weight, and there is a sense of refinement in the absence of complexity. In fact, the Yaris feels tossable to some degree, and with the stick-shift, it’s easy to keep the engine within its optimum rev range.

Fuel economy is better with the manual gearbox, too, at 32 mpg in combined driving. Get the 4-speed automatic, and that figure drops to 31 mpg. 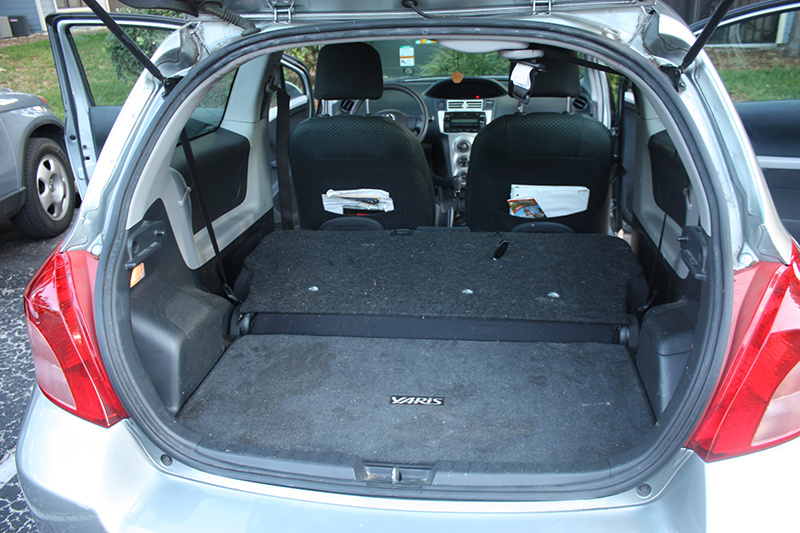 Narrow and lacking in terms of front-seat track travel, a Yaris is no good for taller and wider people. But if you’re of average size, you’ll fit, no problem. Storage space is remarkably good for such a small car, especially with the hatchback, which has dual glove compartments and larger bins and trays for stashing stuff.

Trunk space in the Yaris sedan is quite good, measuring 12.9 cubic feet. That’s more than some compact cars provide. The Yaris Liftback supplies 9.3 cubic feet behind the rear seat and 25.7 cubes with the rear seat folded down. 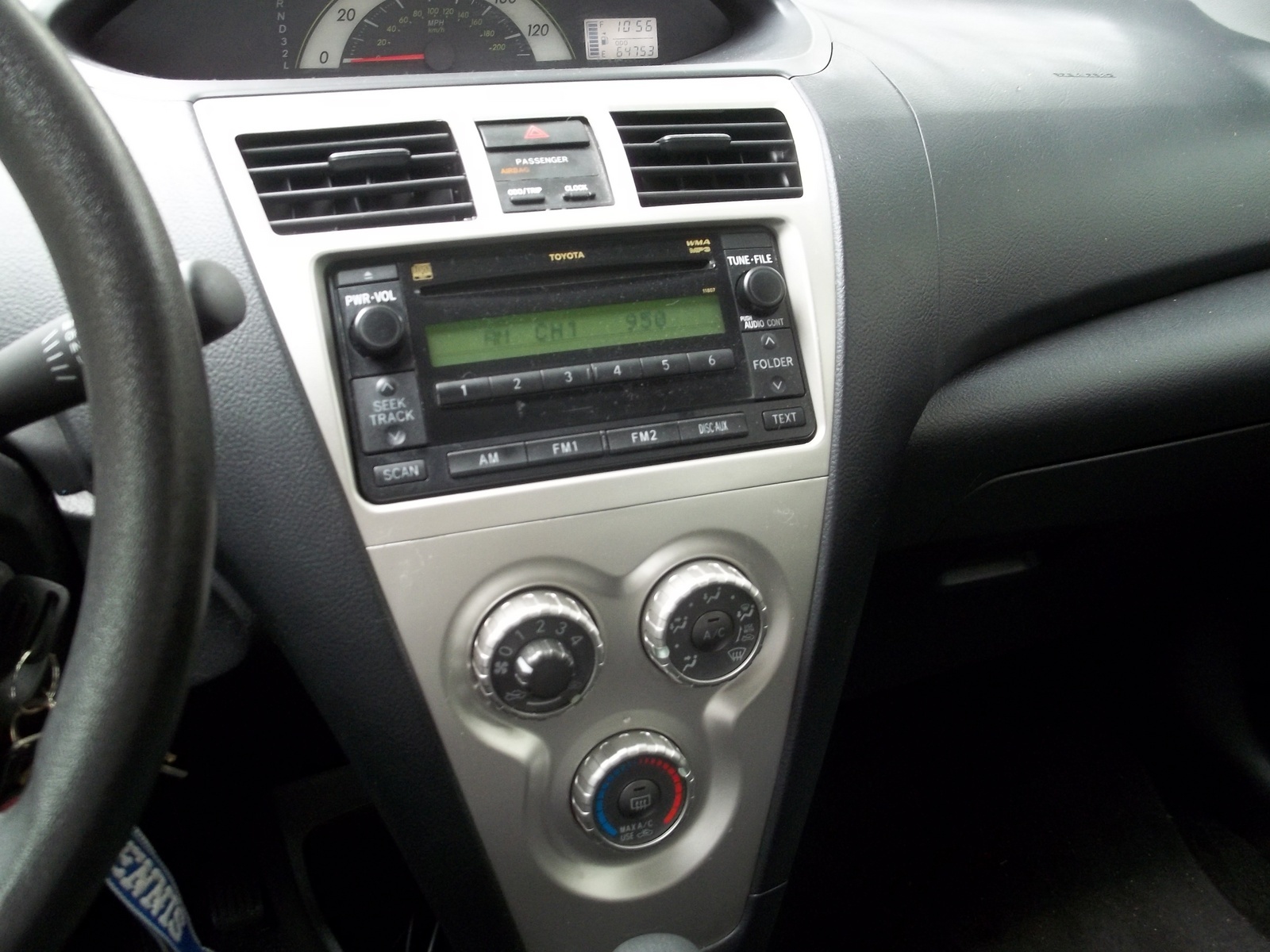 If you’re seeking technological sophistication in a car, the 2007 Toyota Yaris isn’t the right solution. After all, standard equipment includes an AM/FM radio and four speakers, and not much else beyond a 12-volt power outlet.

However, if you select a Yaris S, you will get a CD player and an MP3 player, along with a couple of extra speakers. So there’s that. 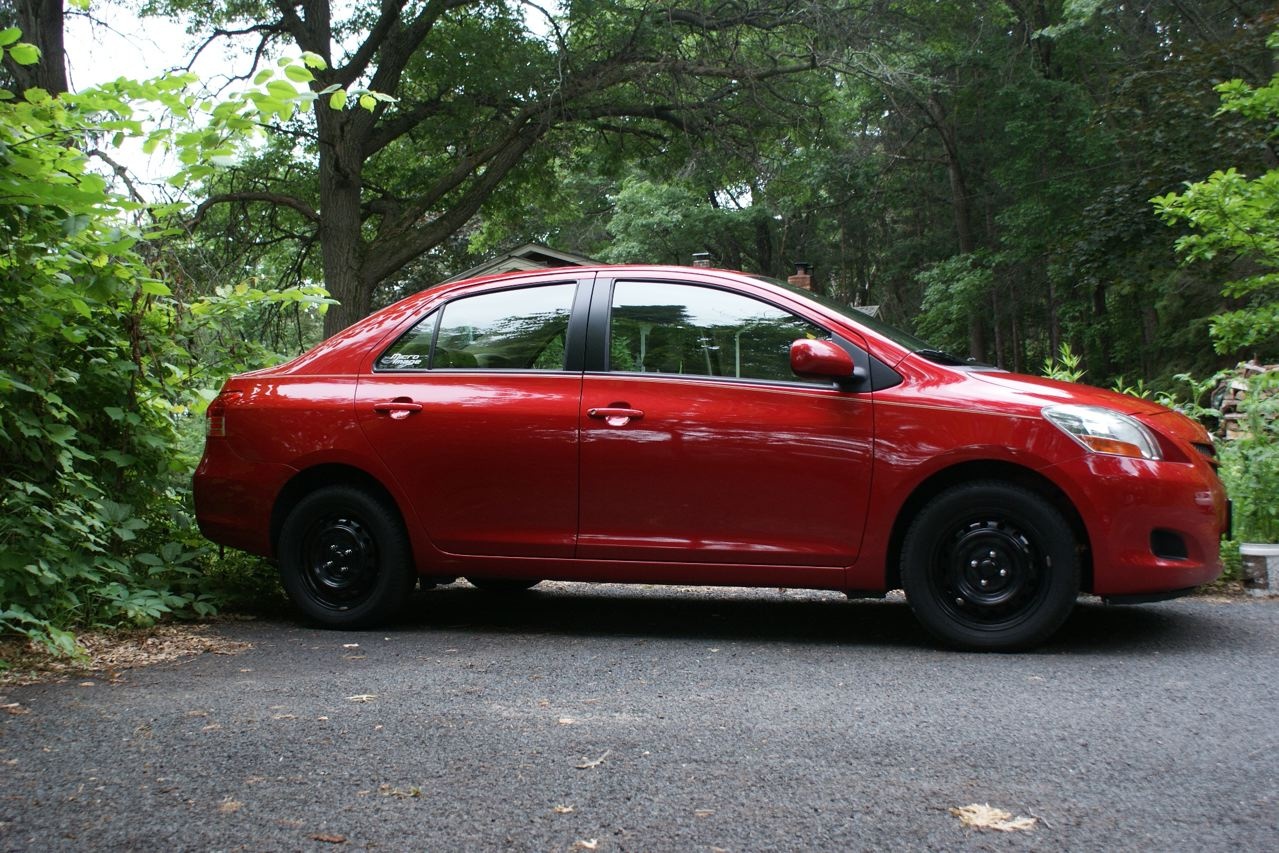 Buy a 2007 Toyota Yaris, and you get a set of dual front airbags. Side-impact airbags are an option, as are antilock brakes. And you can’t really do anything about the car’s feathery 2,290-pound base curb weight, which puts you at a disadvantage in a crash with anything heavier. And almost every other vehicle on the road is heavier than a Yaris.

You are going to want those optional side airbags. That’s because the Insurance Institute for Highway Safety (IIHS) rates the Yaris sedan’s side-impact crash protection as Poor without them. With that option, the car earns a Good rating, matching the rating for moderate-overlap frontal-impact protection. And if you crash your Yaris, don’t roll it over because roof crush strength is merely Acceptable according to the IIHS.

Crash testing performed by the National Highway Traffic Safety Administration (NHTSA) appears to support the importance of side airbags. Without them, the Yaris sedan earns a 3-star rating in the side-impact assessment. Frontal-impact protection rates 4 stars. 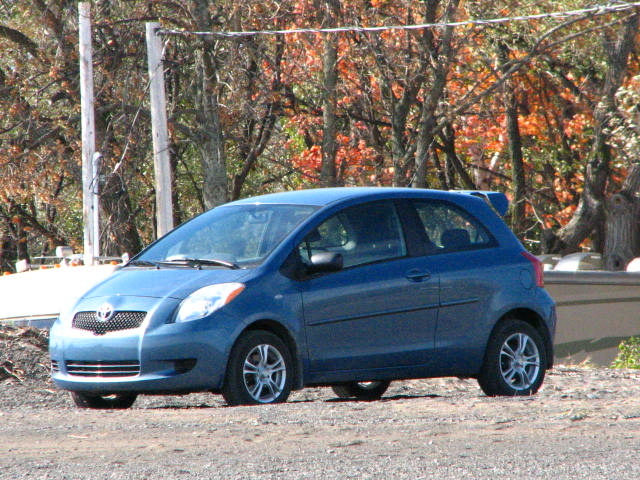 Is a Toyota Yaris a cost-effective solution to your need for a cheap, reliable, efficient set of wheels? Yes. Buy one, take care of it, and it will last forever (or at least it will seem that way).

At the same time, this isn’t the only game in town. The new Honda Fit is exceptionally practical, the new Nissan Versa blends a French design sensibility with a huge interior, and the Mazda Mazda2 is one of the more fun choices in the segment. And don’t forget about the Hyundai Accent and Kia Rio, which are less expensive and come with much better warranty coverage.

lindabarnes I just got my yaris two weeks ago an I love it.

Users ranked 2007 Toyota Yaris against other cars which they drove/owned. Each ranking was based on 9 categories. Here is the summary of top rankings.

Have you driven a 2007 Toyota Yaris?
Rank This Car

my yaris 2007 car ac stopped working before 2 months slowly , means sometimes work and some times doesnt work , and not at all . before 2 weeks i showed 2 car ac tachnicians both told to change cont...

The belt on my 2007 yaris went out today, the car was driven for several miles after this happened. Replaced the belt, car started up fine but the radio, heat/ac, panel lights, tail lights, and bra...

Power Steering Out And So Is Electrical

2007 Toyota yaris. When driving the dashboard turns off and the power steering stops working??

The button on the car key to lock the car won't work and the door indicator light won't go off.

98 views with 3 answers (last answer about a year ago)