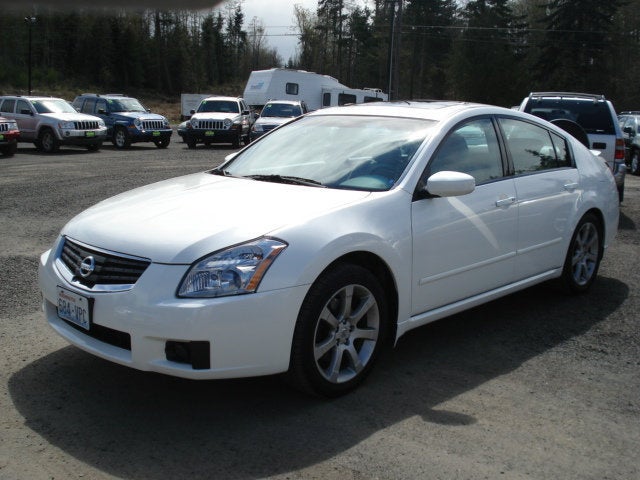 Always marketed as a sportier full-size luxury sedan, the 2007 Nissan Maxima goes through an exterior and interior overhaul in an attempt to win back drivers who flocked to the cheaper Altima or better equipped Toyota Avalon.
Both the SE and more luxurious SL trims of the 2007 Maxima feature the 3.5-liter, 255-hp DOHC V6, but this year it gets a new CVT continously variable transmission with a manual mode, for smoother gear transitions. The CVT is an attempt to get rid of a major torque steer issue that plagued past Maximas. There are also new 17 and 18-inch tire options. The instrument panel gets redesigned gauges and the front seats get more supportive bolsters. On the outside, new fog lights and stretched headlights surround a tweaked grille. A restyled rear bumper is also added. The sports-oriented SE sedan gets a bigger rear spoiler.
The 2007 Maxima comes with plenty of standard features, including front and side curtain airbags, ABS brakes, and traction control. A SkyView sunroof that runs the length of the cabin is also standard. New for 2007 is remote start. The SL comes with heated leather seats as well as wood trim and a new power seat capability for the passenger. Some added options this year include an MP3 player and rear parking sensor. An Elite Package adds heated rear seats and a center console that runs from front to back.
The spaciousness of the large 2007 Maxima sedan has always been a high point for owners. The new interior, though not particularly fancy, has been nicely updated. Most drivers applaud the CVT for its smooth, barely perceptible shift behavior. Drawbacks include a wide turn ratio, surprisingly poor gas mileage, and quirky handling that some feel is still a result of bad torque steer.

Users ranked 2007 Nissan Maxima against other cars which they drove/owned. Each ranking was based on 9 categories. Here is the summary of top rankings.

Have you driven a 2007 Nissan Maxima?
Rank This Car

Nissan Can’t Figure Out The Problem. But I Did!!

Why do nissans go into limp mode ??

My driver side window on my Nissan Maxima just stopped working out of no where , at first I was able roll it down than it jst died. I go to click the power window button and it feels as if nothing...