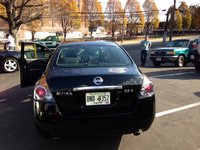 Some acts are impossible to follow, and so the redesigned 2007 Nissan Altima arrives with a bit of a thud, lacking the visionary design and thrilling performance of the outgoing version of the automaker’s midsize sedan. 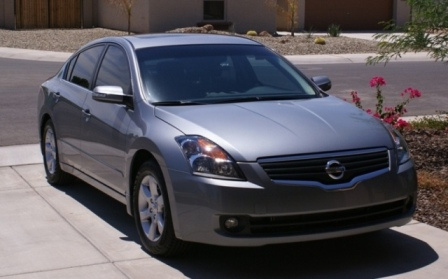 Aiming to once again capture lightning in a bottle, the all-new 2007 Nissan Altima supplies added refinement, improved efficiency, and upgraded safety to family-car buyers looking for a little extra zing during the daily drive. But the new Altima isn’t nearly as groundbreaking as the one that came before it, and in some respects, it takes a few steps backward. 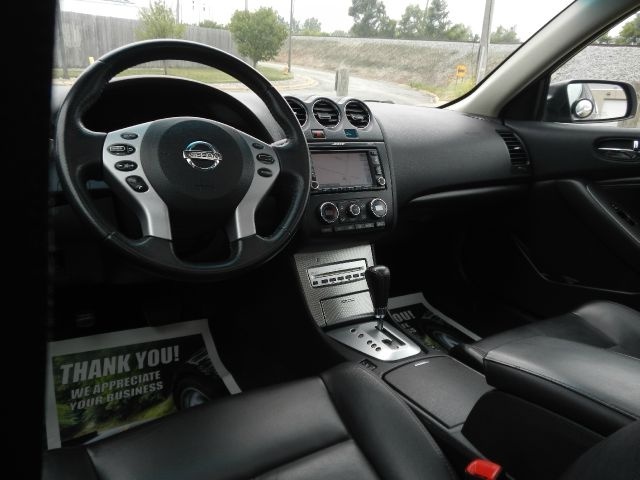 Building on the design elements that made the previous-generation Altima a winner, and inflected with a bit of corporate partner Renault’s French flair, the redesigned 2007 Altima’s styling is mostly successful.

Clearly evolutionary, the new Altima’s aesthetics are appealing with the exception of the garishly oversized, clear-lens, multi-element taillights, which look more suitable for an Imperial Star Destroyer rather than a humdrum family sedan.

When it comes to the new Altima’s interior, the materials are a clear step up from the old Altima, and fans of the Datsun 240Z will adore the three round air vents at the top of the control panel, reminiscent as they are of the secondary gauges in the iconic sports car.

But in other ways, as is true of the exterior styling and underlying engineering, the new Altima’s cabin design is less special than before. Take the instrumentation, for example, which swaps the ’06 Altima’s sexy round individual gauges for a wide, flat panel nearly devoid of personality. The steering wheel isn’t as appealing, either, and the controls aren’t as deftly integrated as they were before.

What was it that Paula Abdul once sang? Two steps forward, one step back… 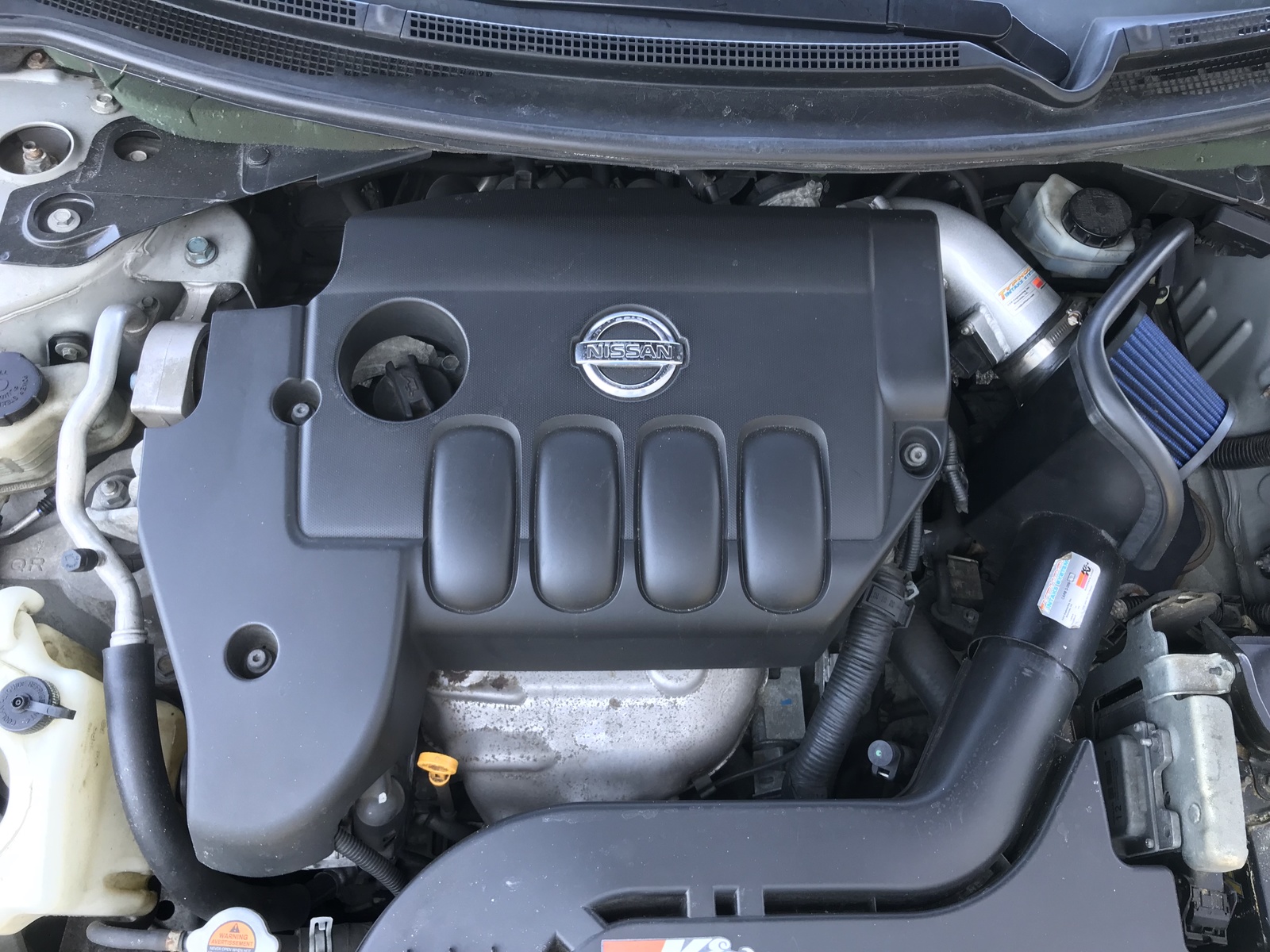 As was true before, the new 2007 Altima offers a choice between a 2.5-liter 4-cylinder and a 3.5-liter V6 engine. The 175-horsepower 4-cylinder is standard with base and popular S trims, while the 270-hp V6 is included with sporty SE and upscale SL trims. Either engine produces good power for the midsize car segment, and Nissan's VQ-series V6 is especially satisfying.

A 6-speed manual transmission is standard with all but SL trim. Most examples, however, will have a new continuously variable transmission (CVT) that swaps in for the previously available torque-converter automatics.

While the CVT is better than those which came before it, it’s not anywhere near as satisfying as a traditional automatic when you’re accelerating hard, such as when merging onto a freeway. This type of transmission’s characteristic drone remains evident, and really detracts from the driving experience.

That’s too bad because the Altima’s inherent athleticism remains intact. Especially with SE trim, this is a quick, responsive automobile. Will Nissan reintroduce the racy SE-R model that was available in 2006? Driving enthusiasts will need to wait and see. 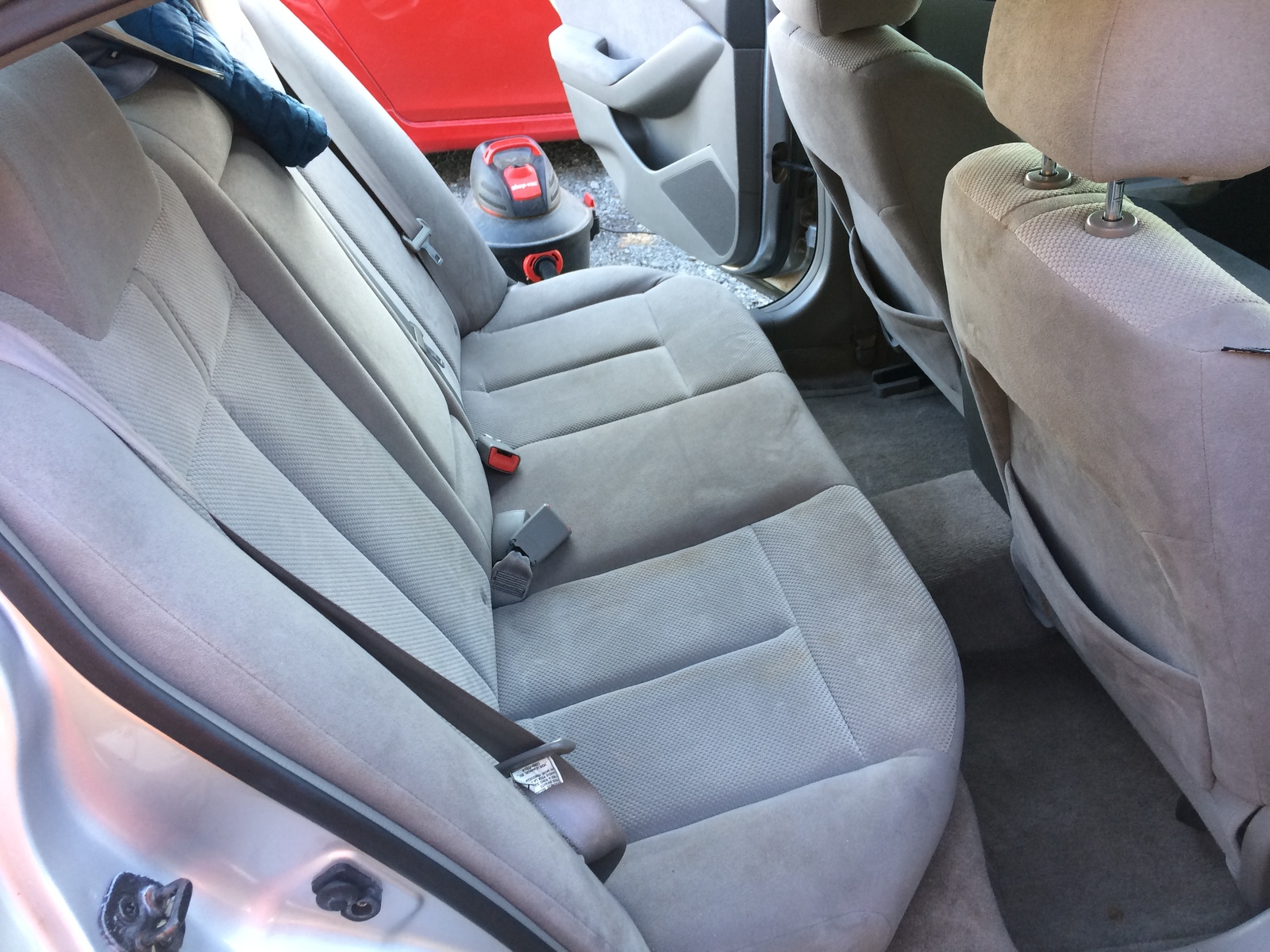 One of the hallmarks of the previous-generation Altima was its roomy and comfortable interior, and with this 2007 redesign, Nissan gets a part of that equation right. The Altima is roomy, especially when comparing specifications on paper. But is it comfortable? That all depends on where you sit.

Up front, the seats are comfortable, especially with SE and SL trims, which include an 8-way power-adjustable driver’s seat. The back seat, however, sits low in the car in order to preserve headroom beneath the Altima’s rakish roofline. In turn, this means adults riding in this location get little in the way of thigh support, and over time, that makes this Nissan mighty uncomfortable for passengers.

Interior storage is improved in some respects, but not in others. And the trunk shrinks a bit, too, down to 15.3 cubic feet. This is less than what primary competitors offer. 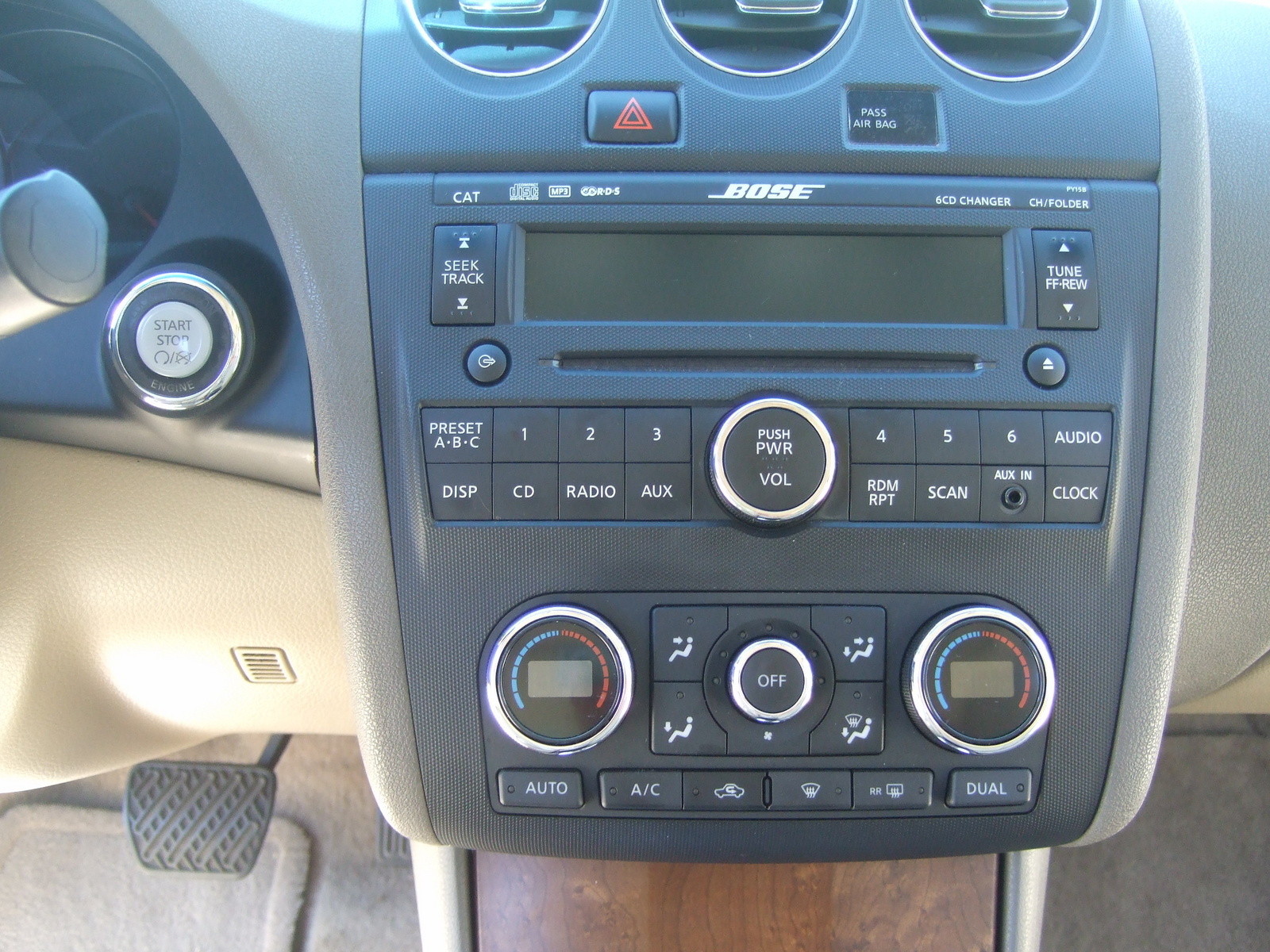 With each midsize car redesign, more technology trickles down from the luxury segments and that’s true for the all-new 2007 Altima.

Perhaps the big news for 2007 is Bluetooth hands-free phone connectivity. With Bluetooth, you can wirelessly connect your cell phone to the car’s infotainment system in order to make and receive calls. This is helpful in terms of reducing distractions while you’re driving. Bluetooth is standard with SL trim, paired with a premium Bose audio system that includes satellite radio and a CD changer.

Every 2007 Altima includes keyless entry and engine start. You keep the car’s key fob in your pocket or purse, and you can enter the car and use a button to start the engine without removing the fob. This is a convenient way to unlock and start the car, but it’s also easy to lose track of the fob, and replacement costs are expensive.

Nissan offers a navigation system for the new Altima, too, and it’s optional on all versions of the car except for the base trim level. A reversing camera comes with the navigation system, providing a live video view of what’s behind the car on a dashboard display screen whenever the transmission is in reverse. 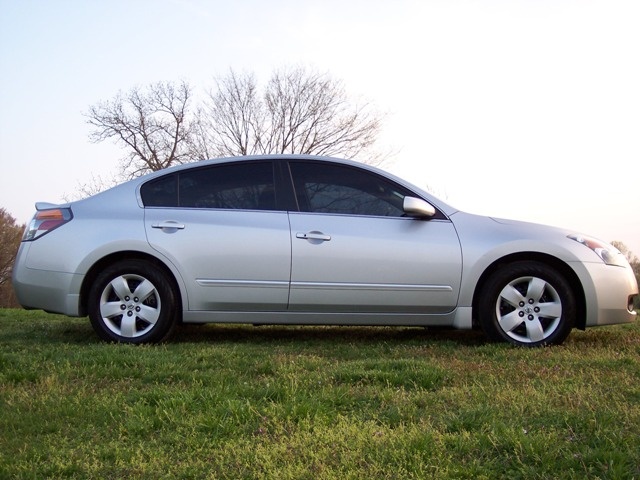 Technology improvements aren’t limited to the Altima’s convenience feature list. Every version of the car has dual front airbags, dual front side-impact airbags, and dual side-curtain airbags for the front and rear seats. Antilock brakes are standard or optional on all but the base trim level, and stability control is an option with the V6 engine.

Thanks to the car’s new structure and all of those airbags, the 2007 Altima earns Good ratings for frontal- and side-impact crash protection, according to the Insurance Institute for Highway Safety (IIHS). At the same time, though, roof crush strength rates Acceptable and the seats score a Marginal when tested for protection against injury in a rear-impact collision.

Meanwhile, over at the National Highway Traffic Safety Administration (NHTSA), the new Altima garners 5-star ratings in all crash-tests except the side-impact, rear-passenger assessment. In that test, it gets a 4-star rating. Rollover resistance also measures 4 stars, according to the NHTSA. 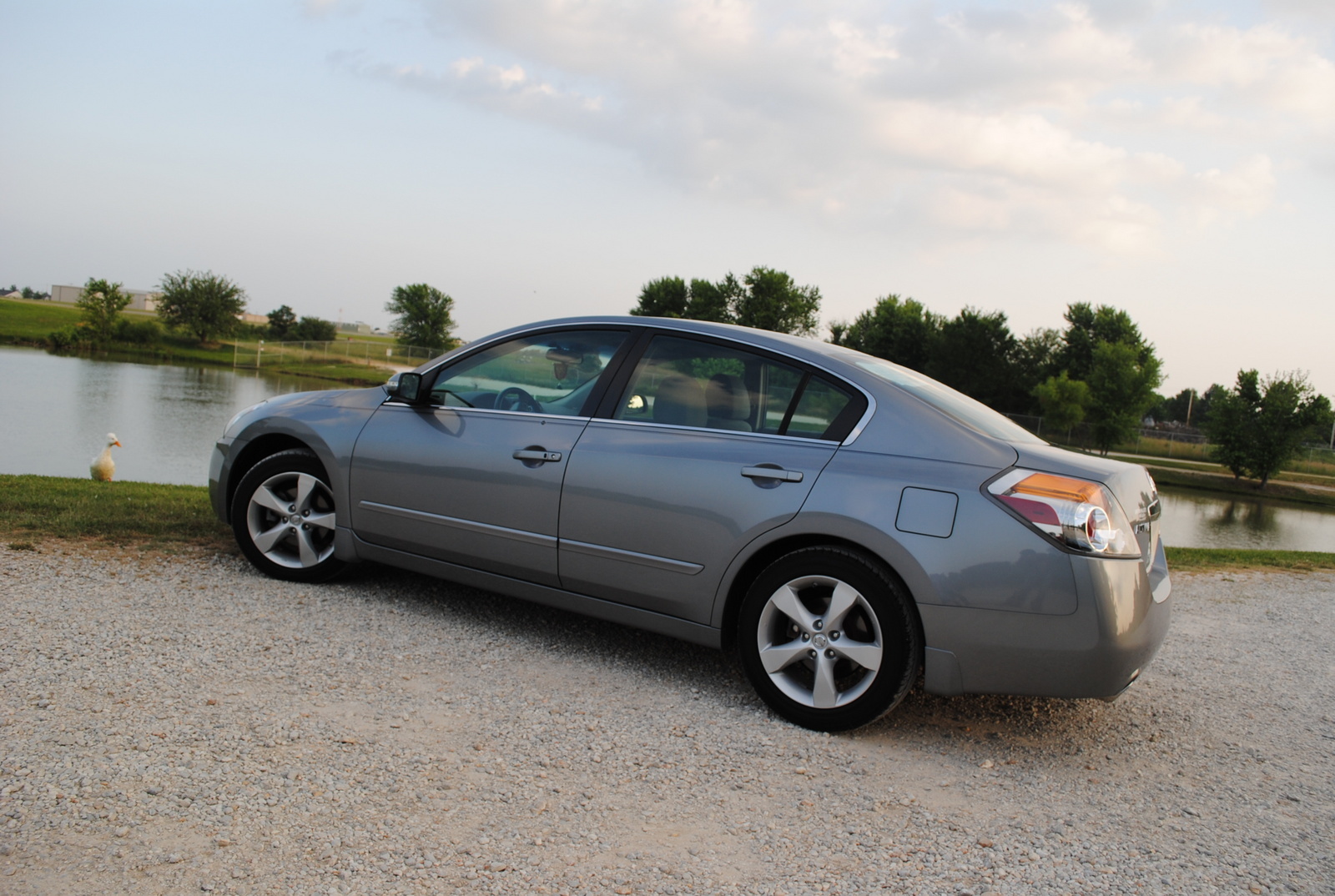 While the new Altima’s CVT is a dynamic drag, it definitely improves fuel economy. With the 4-cylinder engine, the EPA rating in combined driving shoots from 23 mpg to 26 mpg. With the V6, the improvement is just 1 mpg, negated by the 2007 model’s requirement of premium gas for the larger engine.

As far as prices are concerned, the Altima 2.5 S starts at well over $20,000. Sure, you can special order the de-contented base model, or try to find a dealership with one on the lot, but even then the Altima is basically in the same pricing ballpark as its main rivals.

However, there is more to this picture than pure numbers. The 2007 Nissan Altima includes many features that are optional or unavailable on competitors, so in some respects, it remains cost-effective even if it costs a little more.

dlyte1534 This car made me a loyal nissan/infinit driver for life. It's a great looking car, good on gas and reliable. Hands down the best car i have ever owed. My only complaint is the paint. Nissan makes beautiful cars and truck but use such soft paint but you can't go wrong buying this car.

Guru61MQY You are absolutely correct I have had my 2007 Nissan Altima since 2007 and it is currently 2020. Believe me I’ve had minimal problems with this car. Coincidentally you mentioned the paint that’s the only problem I’ve ever had with his car that was significant because after a while the paint start oxidizing which could be due to the hot sun in Texas. So yes it’s time to get a new car now and I’m very skeptical of getting any other maker then Nissan. Oh I forgot to mention the Bose System which has Carried me all these years!!!

Users ranked 2007 Nissan Altima against other cars which they drove/owned. Each ranking was based on 9 categories. Here is the summary of top rankings.

Have you driven a 2007 Nissan Altima?
Rank This Car

Mason1381 asked a 2007 Nissan Altima 3.5 SE Maintenance & Repair question about a month ago

New battery full charge. Second reman alternator still no charge. All voltages at alternator pig tail and battery cable correct. Battery light will not illuminate with either new alternator but does...

I have a 2007 Nissan ALT. When filling it at the gas station before it is full, gas leaks out under the car's drivers side rear area. What is the likely issue and how to fix it?

I swapped out the transmission for a used one from a crashed car and it's not starting it blows the positive battery cable fuse and says no key after it blows the fuse what should I do?