The 2007 Honda Odyssey is popular for a good reason. It makes life easy in an enjoyable way that eludes other minivans. 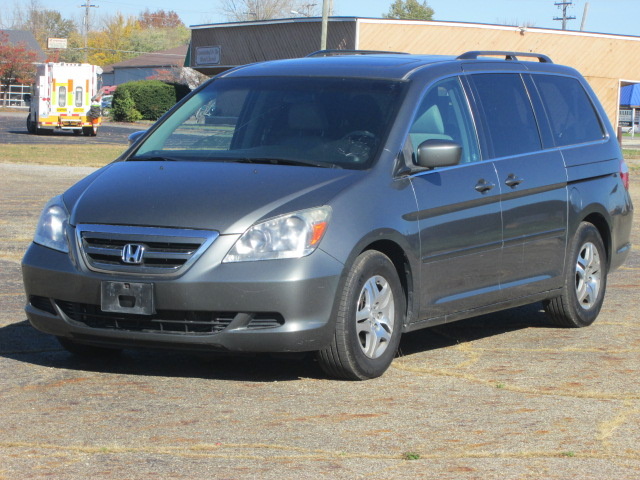 Now in its third year since a complete redesign, the 2007 Honda Odyssey adds a standard tire pressure monitoring system and a telescopic feature for the tilt steering wheel. Otherwise, this excellent example of a minivan is unchanged, and it continues in LX, EX, EX-L, and Touring trim levels. 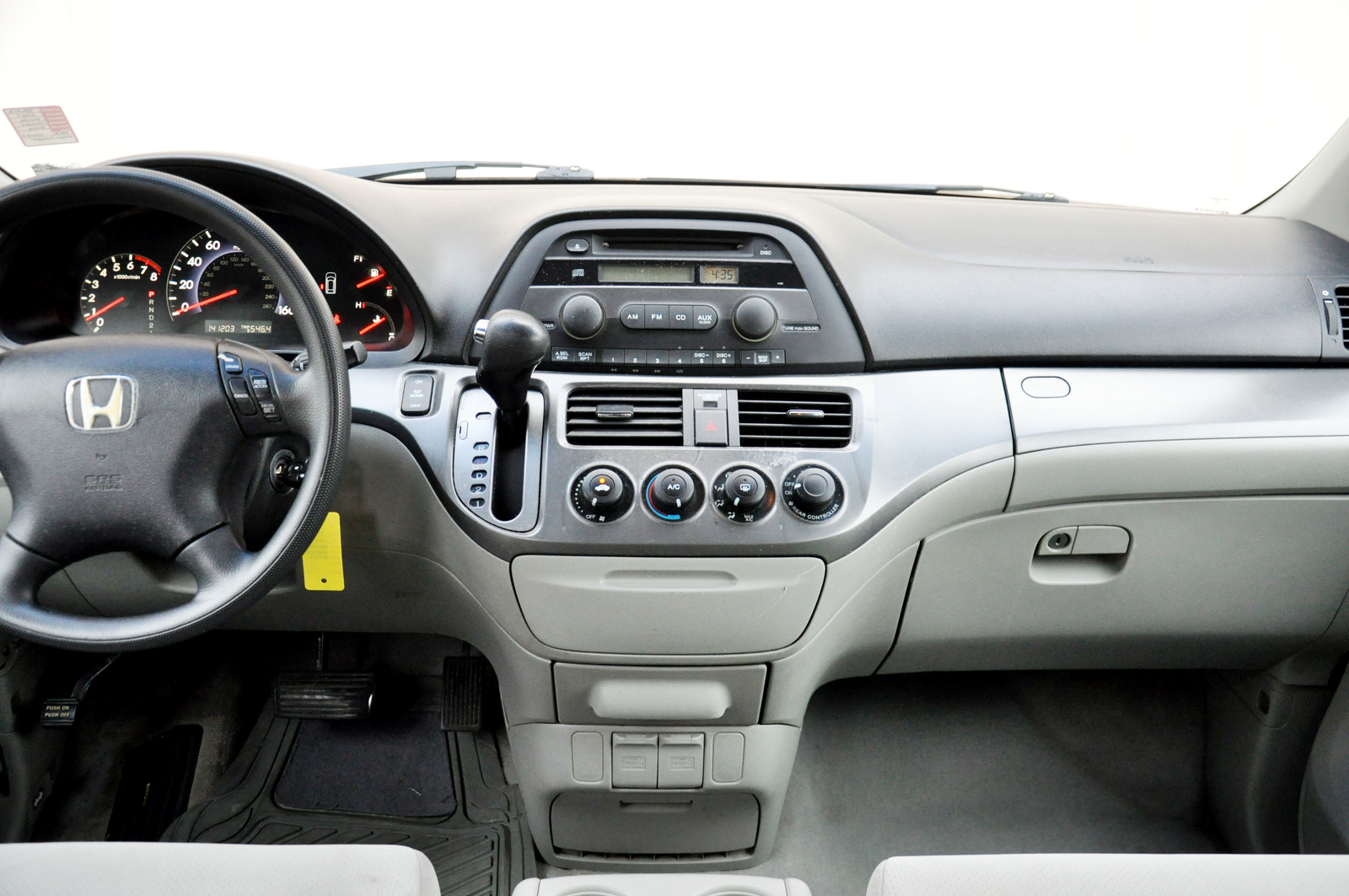 Style is not a minivan’s reason for existence. Utility is the point, so the design maximizes interior volume at the expense of styling appeal.

As minivans go, the Odyssey’s conservative and cohesive appearance falls somewhere between the surprisingly sleek Chrysler Town & Country and Dodge Grand Caravan and the comparatively drab Toyota Sienna. The futuristic Nissan Quest is something else entirely, and the misshapen quartet of vans from General Motors (Buick Terraza, Chevrolet Uplander, Pontiac Montana SV6, Saturn Relay) ought to be taken out to the back of the barn and put out of their misery.

Inside, you’ll find an emphasis on function rather than form. Front-seat occupants face a layered dashboard design, with a black upper section and lower panels that match the seats. A silver band of trim separates them, and Honda’s traditional no-nonsense instrumentation and controls are logically located if a bit hard to reach.

Honda also places the transmission lever on the dashboard, located close to the driver for easy access. Unfortunately, it can get in the way when reaching for the stereo and climate controls. 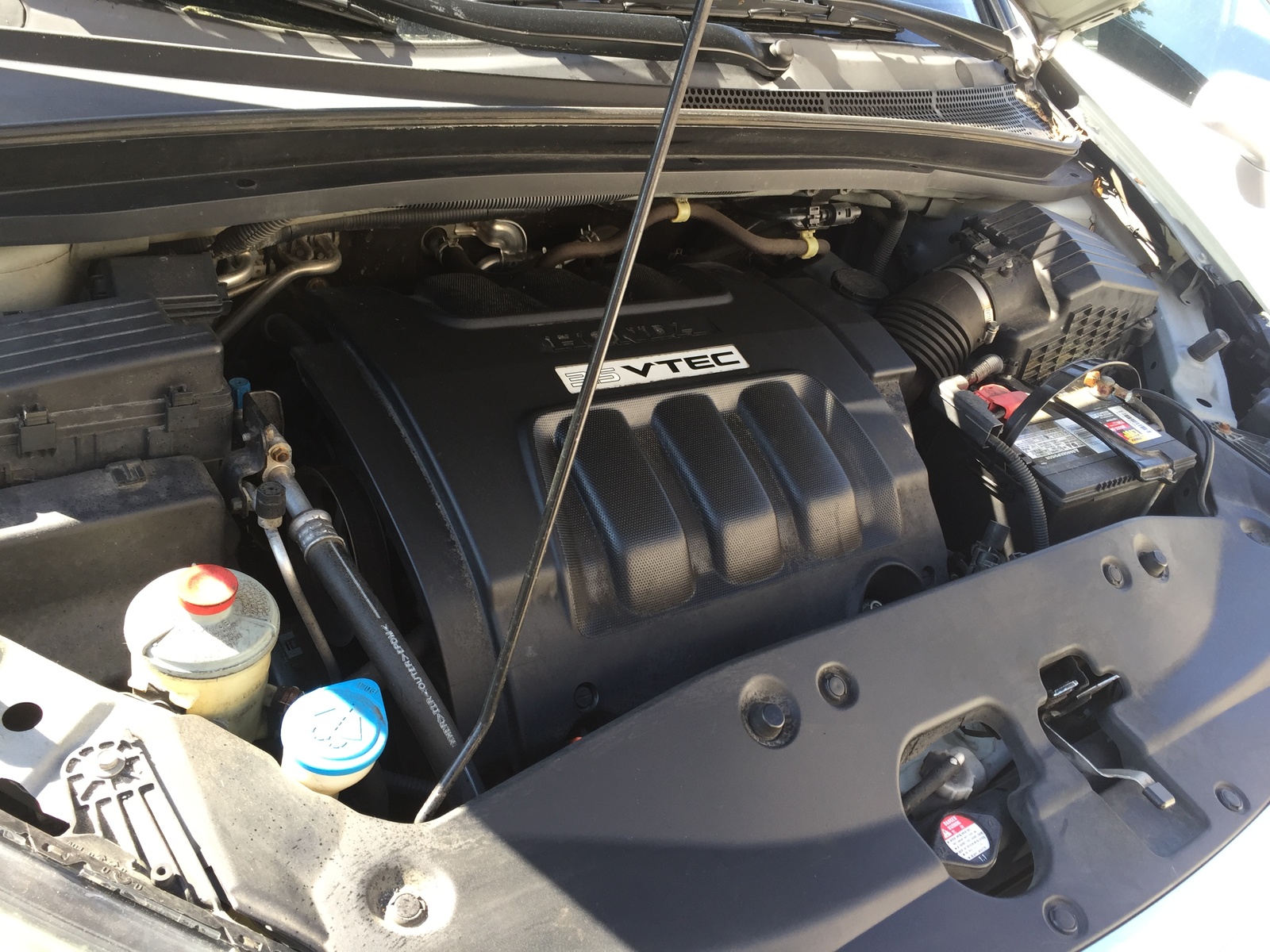 Making 244 horsepower, the Odyssey’s smooth-revving 3.5-liter V6 engine is a gem, powering the front wheels through a 5-speed automatic transmission. Choose EX-L or Touring trim, and it comes with Variable Cylinder Management (VCM), which shuts down three of the engine’s six cylinders under specific driving conditions in order to save gas. The VCM system improves fuel economy from 18 mpg in combined driving to 19 mpg, according to the EPA.

Riding on a 4-wheel-independent suspension, the 2007 Odyssey demonstrates the typical driving characteristics that can bring joy to any Honda owner’s face. Though it weighs about 4,400 pounds, it doesn’t feel heavy from behind the new tilt/telescopic steering wheel. Instead, it feels responsive to inputs, supple in terms of ride, and athletic when it comes to handling. For a minivan, of course.

There is some room for improvement, though. First, the brakes warm easily, so when you’re driving in the mountains with lots of people or cargo aboard, they can quickly heat, grumble, and even shudder a bit. Second, Touring trim comes with a tauter suspension and standard Michelin PAX run-flat tires, which have stiffer sidewalls. This degrades the ride to some degree but also enhances the handling.

Speaking of the Michelin PAX system, it comes in handy when a tire loses inflation pressure and you’re out in the middle of nowhere. The run-flats allow for more than 100 miles of driving at speeds up to 55 miles per hour, but tire replacement cost is on the pricey side. 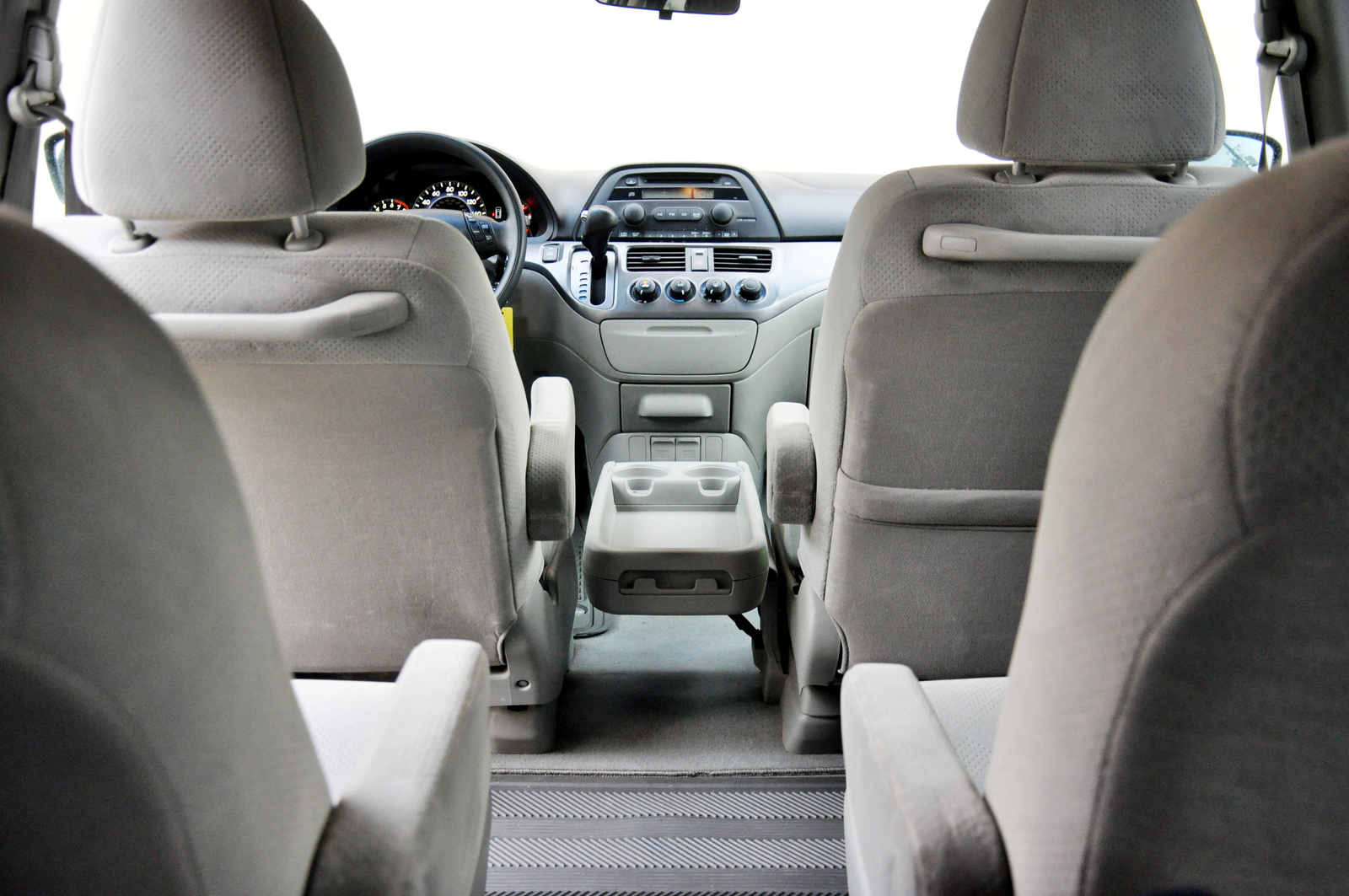 When it comes to the features people want in a minivan, the 2007 Honda Odyssey checks all of the boxes… and then some.

Every trim level except for the base LX offers 8-passenger seating. Credit the handy PlusOne seat between the two second-row captain’s chairs. You can use it for a person, you can fold it for a table, or you can remove and store it to create a pass-through to the third-row seat. When it’s stored, you can even slide the two captain’s chairs together, placing occupants further away from the sliding doors and in a safer spot during a side-impact collision.

The PlusOne seat stows in a compartment under the floor in the Odyssey’s second row. When the seat isn’t placed there, the compartment features a Lazy Susan method of storage. Up front, the Odyssey includes dual glove compartments and numerous other storage bins and trays. In back, a storage well behind the third-row seat holds all manner of sporting equipment, and it won’t roll out the moment you open the rear liftgate.

The Honda Odyssey LX has everything you need unless your needs include power sliding side doors, a power driver’s seat, and second-row window sunshades. Those come standard on the Odyssey EX. Or, you can choose EX-L trim for leather seats, heated front seats, and a power sunroof. Touring trim supplies triple-zone automatic climate control, a power rear liftgate, power-adjustable pedals, and more. 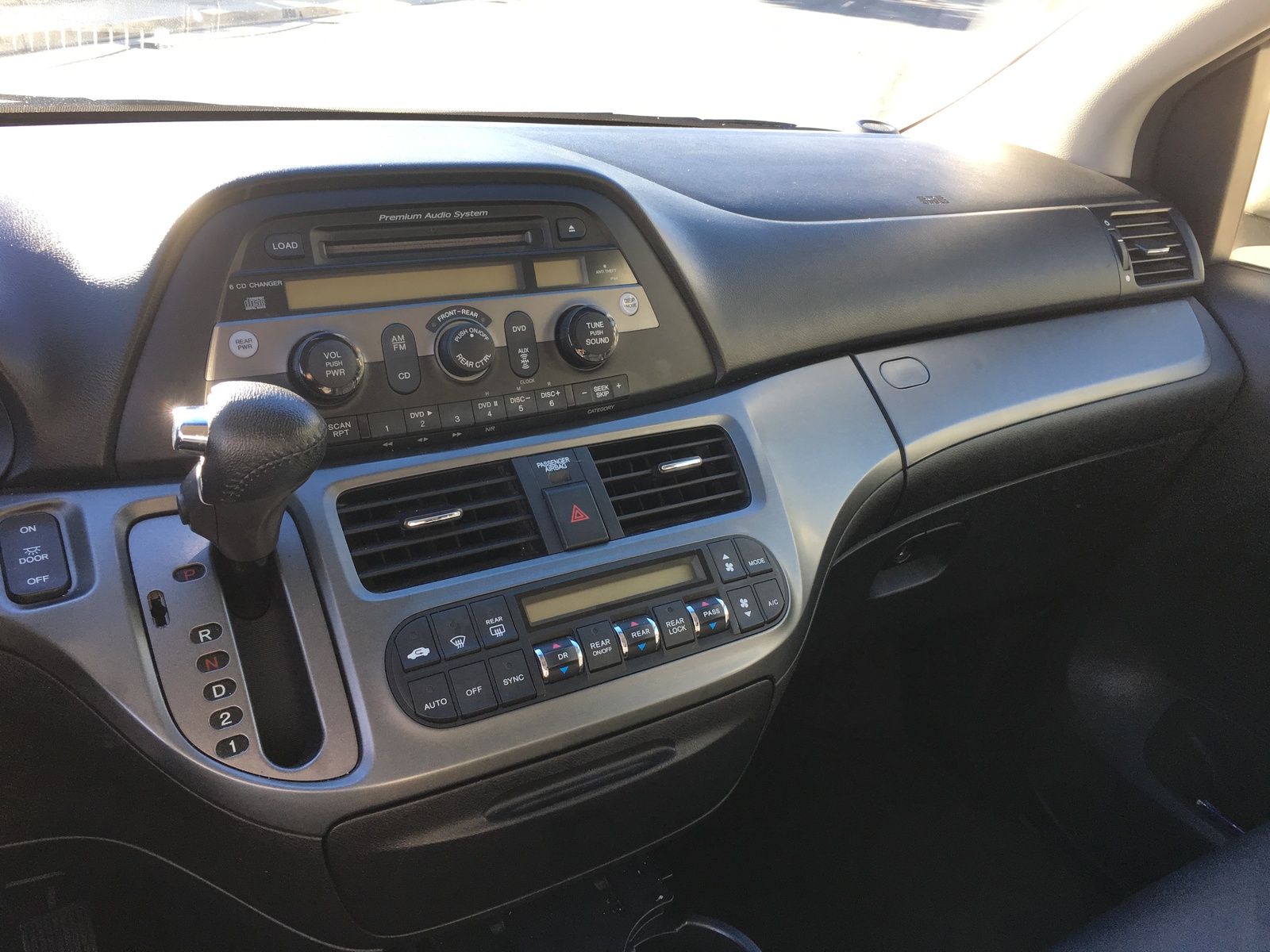 There is no shortage of entertainment features aboard a 2007 Honda Odyssey, but you’ll need to upgrade to a higher trim level in order to access them.

At the base LX trim level, the Odyssey includes a 4-speaker stereo and a CD player. The popular Odyssey EX adds a couple of extra speakers along with a 6-disc in-dash CD changer. A navigation system with voice recognition is optional for the EX-L trim, and it includes a reversing camera that shows the driver what’s behind the Odyssey when the van is in reverse gear. A rear-seat entertainment system with a DVD player is also available for the EX-L. Touring trim includes all of that, plus triple-zone automatic climate control, a 115-volt household-style power outlet, satellite radio, and more.

What you can’t get with the Odyssey is Bluetooth, a cell phone pairing technology that allows the driver to accept and make phone calls without holding onto the phone. 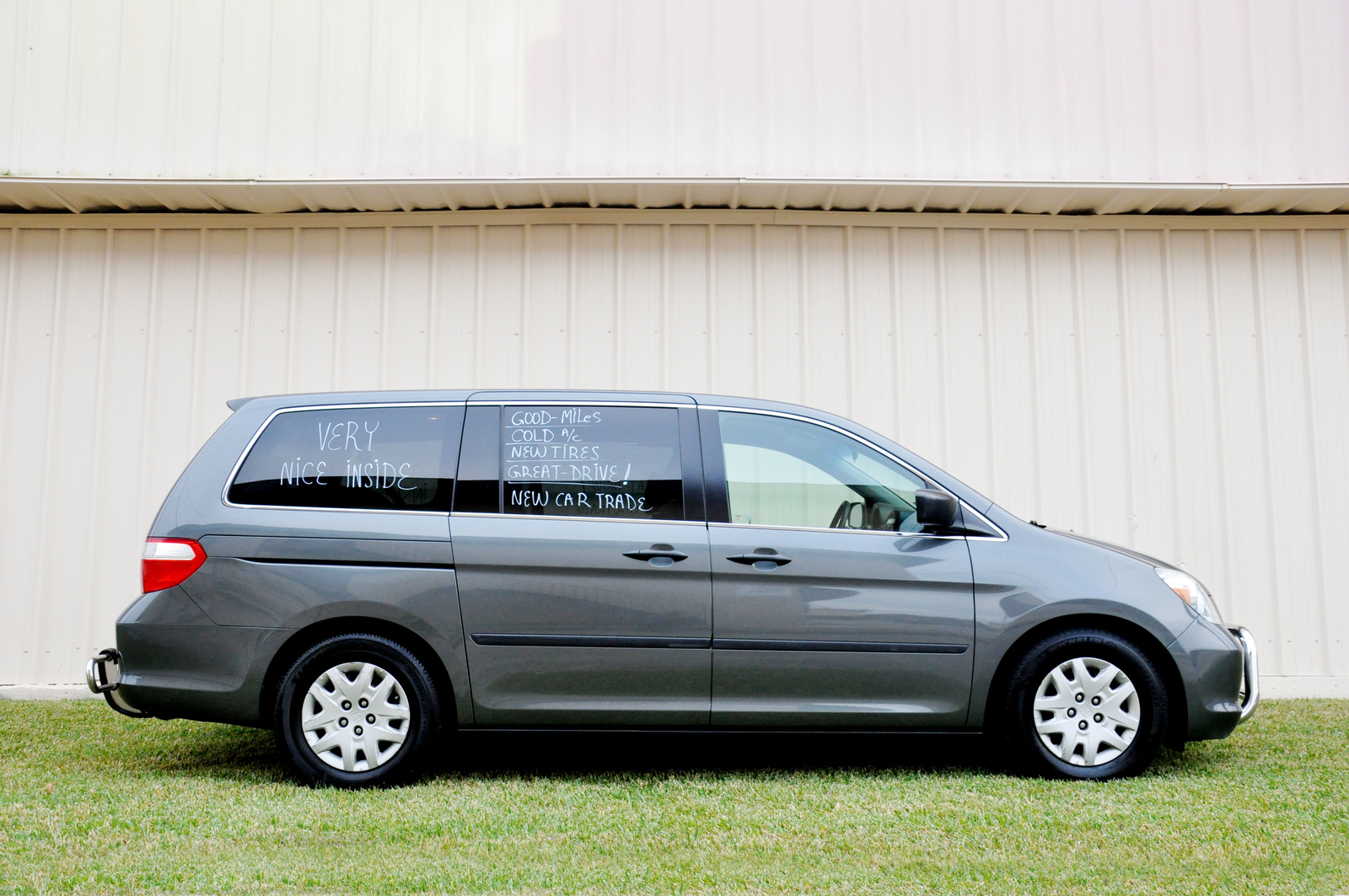 Lately, Honda builds its vehicles around what it calls an Advanced Compatibility Engineering (ACE) vehicle architecture, and the 2007 Honda Odyssey is no different. Honda says ACE helps to deflect crash energy away from the cabin, and by extension, the people seated within it.

Additionally, the Odyssey includes a long list of standard safety equipment. Front, front side-impact, and side curtain airbags with a vehicle rollover sensor for all three rows are on that list, along with antilock brakes, traction control, and stability control.

If you lose control and a collision occurs, rest assured the Odyssey will do its best to protect you. The minivan receives Good crash-test ratings from the Insurance Institute for Highway Safety (IIHS) in the moderate offset frontal-impact and side-impact assessments. The IIHS assigns a Marginal rating for the Odyssey’s head restraints and seats, though.

In tests conducted by the National Highway Traffic Safety Administration (NHTSA), the Odyssey earns 5-star ratings across the board except for rollover resistance. In that test, it gets a 4-star rating. 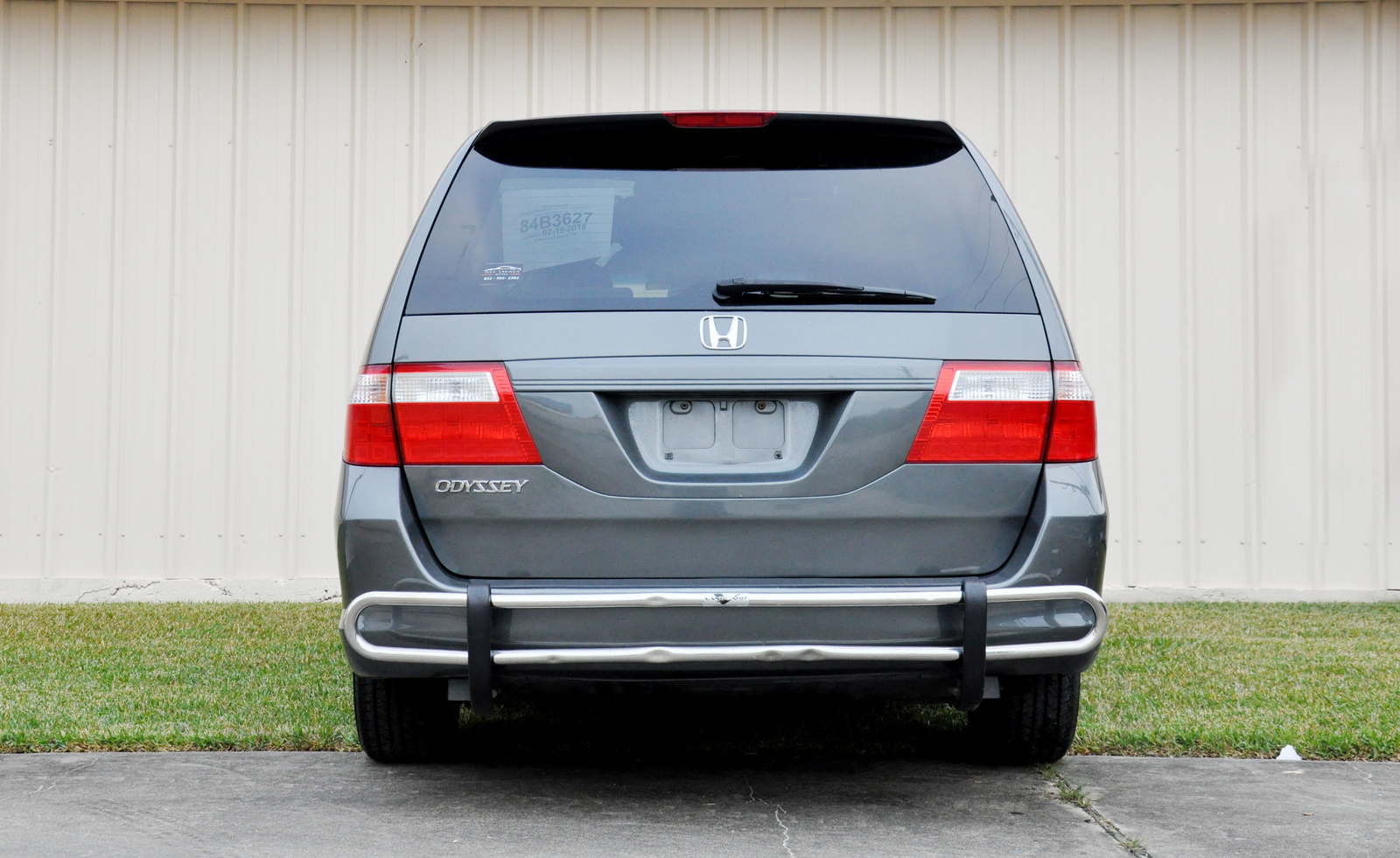 Especially in Touring trim, a 2007 Honda Odyssey isn’t inexpensive. The company commands a premium for this model, but it does so for good reason. Safe and sophisticated, roomy and useful, comfortable and enjoyable to drive, and equipped with a well-earned reputation for reliability, the Honda Odyssey represents something close to minivan perfection.

Users ranked 2007 Honda Odyssey against other cars which they drove/owned. Each ranking was based on 9 categories. Here is the summary of top rankings.

Have you driven a 2007 Honda Odyssey?
Rank This Car

Is There A Secret Password Needed To Get A Question Answered By Cargurus?

I managed to find a phone number, but no answer. I left a message, but no response in several days, either by phone, text, or email. Has anyone else had better luck? All I want to know is how to ...

Sliding Door Fell Off-anyone Else Having This Issue?

There was a grinding noise which started on our driver side power sliding door a couple days ago, then today, when opening, it fell off the track causing substantial body damage. The dealer said the ...

I Was Notified A Buyer Responded. How Do I See The Message?

I got a text from you that a prospective buyer "expressed interest" in my 2007 Honda Minivan. Can I see the message? If so, how? I see no prompt. Thanks. DoN

Firecracker Sounds Coming From Under The Hood

Drained battery overnight, jumped to start and let it run. started making what sounded like fireworks under the hood after about 15 minutes. I let it cool down and later drove to my mechanic, it was...