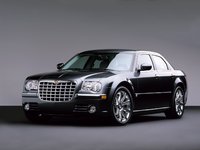 The Chrysler 300 is more than Detroit’s answer to German luxury sedans. It’s a great value that shows what can be accomplished with a large car when a company listens to its customers. 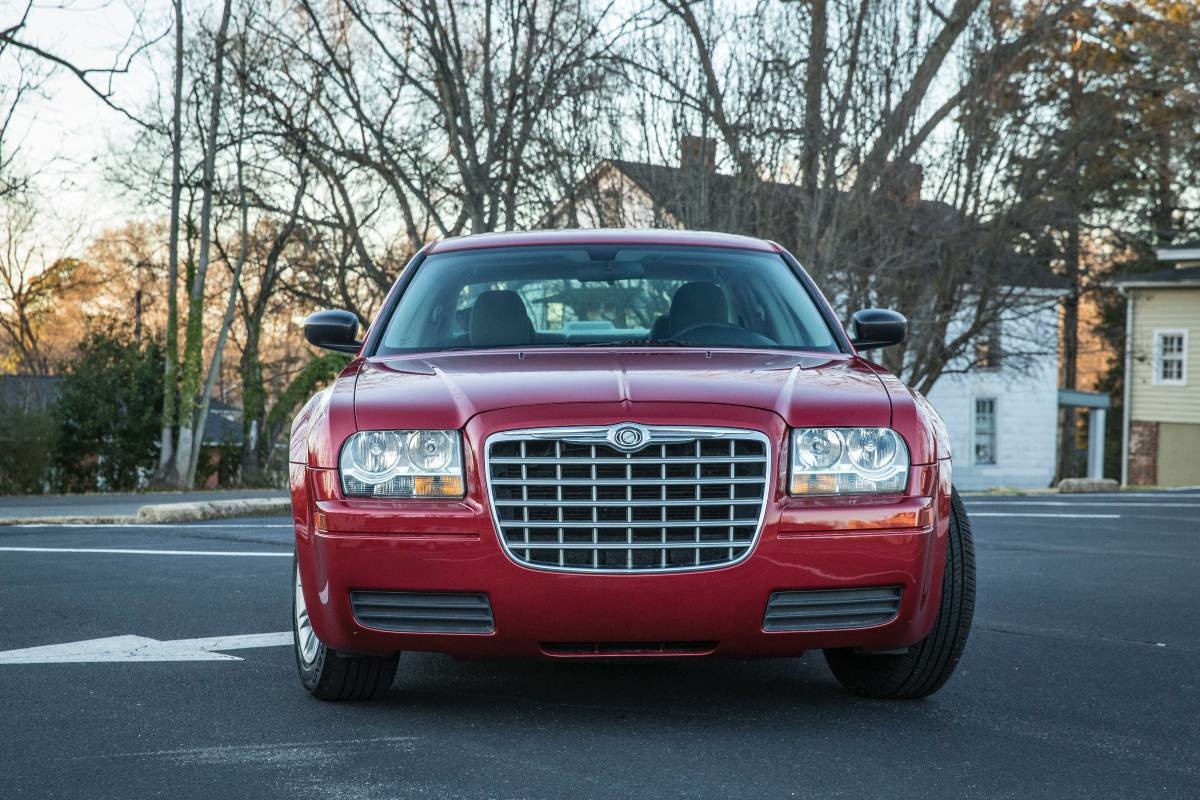 Since its arrival three years ago, the Chrysler 300 has been the company’s flagship sedan, and as such, it is available with a long list of luxury features and amenities. Even though this generation is now showing its age, the 300 stands up well to competition from Europe and elsewhere, and it offers a performance SRT8 trim that makes it downright rowdy.

Thanks to its roots as a DaimlerChrysler-era car and the fact that it shares a platform with a Mercedes E-Class of the era, the 300 has a composed rear-drive platform and lively handling that makes it feel and drive like a smaller car.

The Chrysler 300 is aimed at car buyers that are looking for a luxurious car that won’t break the bank, as base trims start at under $25,000. There are five trims in all: Base, Touring, Limited, 300C, and Hemi-powered SRT-8. The price tops out at just over $40,000, which undercuts comparably equipped European luxury sedans. 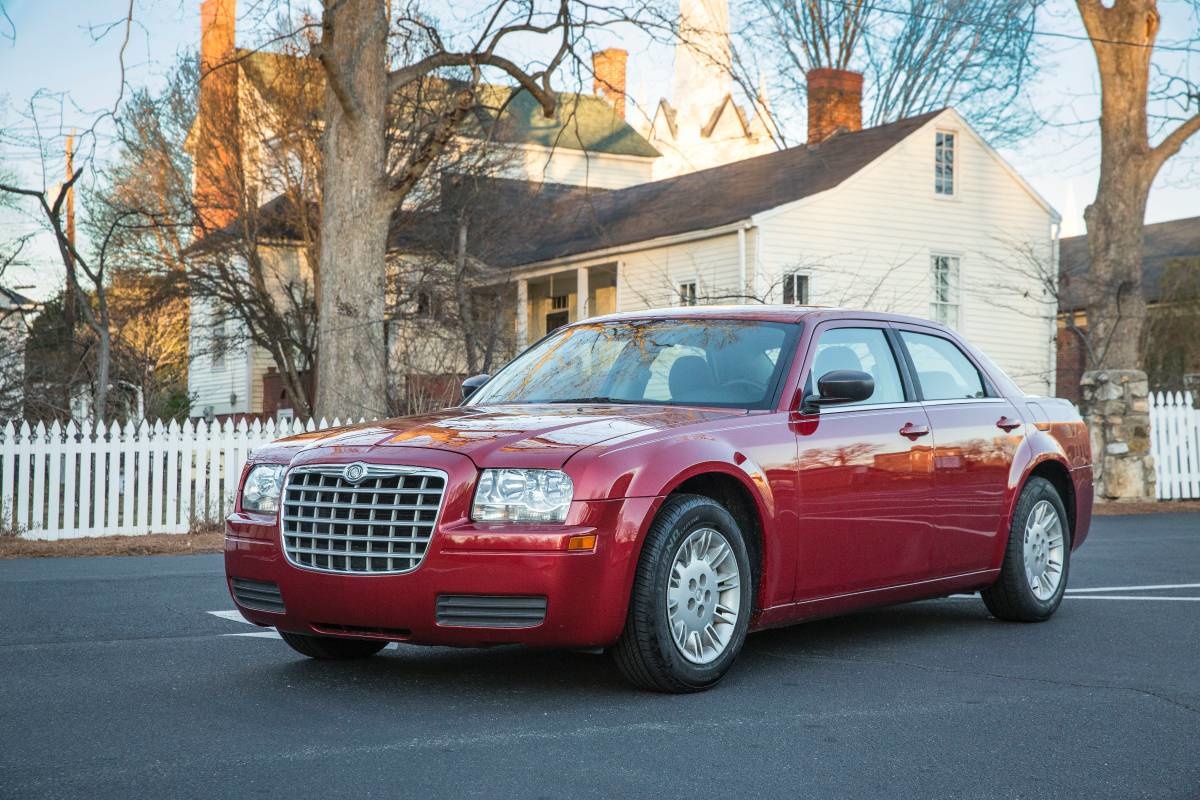 The Chrysler 300’s old school styling and big-car aesthetic make it one of the most distinctive cars on the road today. The front end is decidedly Bentley-esque and features a large grille with a sloping hood that gives the 300 a muscular stance. Slab sides and a squared-off rear complete the look, though the car avoids looking boxy. Chrysler offers a variety of wheel sizes for the car, up to 20 inches, which can add a real “pop” to the 300.

The high-performance SRT-8 trim has functional air ducts to direct airflow toward the brakes, and a functional rear spoiler adds some degree of downforce to the rear of the car. The SRT -8’s 20-inch wheels are staggered in size for a true performance look, as the rears are slightly wider than the tires in the front.

Inside, the cabin is styled in much the same way, though with more purpose and function. The seats are positioned high, and though the car’s roof slopes gently, all passengers maintain a decent amount of headroom. The dash and all controls are styled in such a way as to be upscale but clean, with almost no unnecessary decoration to clutter the look. 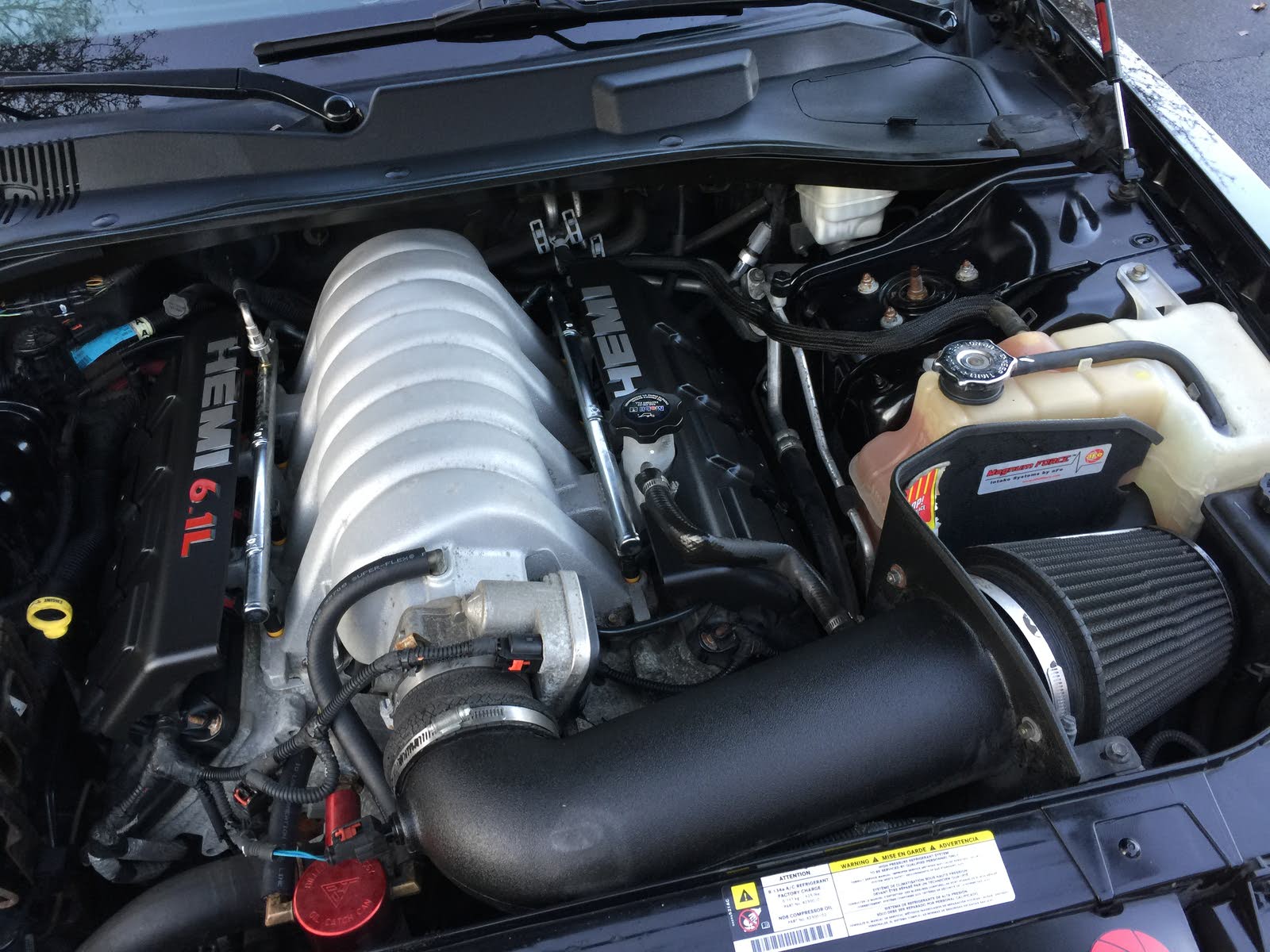 The Chrysler 300’s draw goes further than its styling. The car is one of the more engaging performers of any American sedan of its era, regardless of size or price. It’s certainly got the right layout to be an enthusiast’s car, and though rear-wheel drive may not be the best pick for people living in places where it snows, the 300 does well with the right tires.

In its most basic form, the Chrysler 300 performs admirably. Its 2.7-liter V6 isn’t going to raise any eyebrows with its performance, but it’s more than powerful enough to make the 300 a competent commuter. As buyers step up through the powertrain levels, the car gains power and performance but doesn’t become a true performer until one of the two available V8 engines are optioned in.

Handling is surprising for a car of the 300’s size. It maintains a high level of composure during spirited driving, and can even be a weekend thrill ride for someone wanting to carve up a canyon road. Thanks to its Mercedes E-Class roots, the ride is smooth but controlled, and the steering is weighted just right to make the car feel responsive. 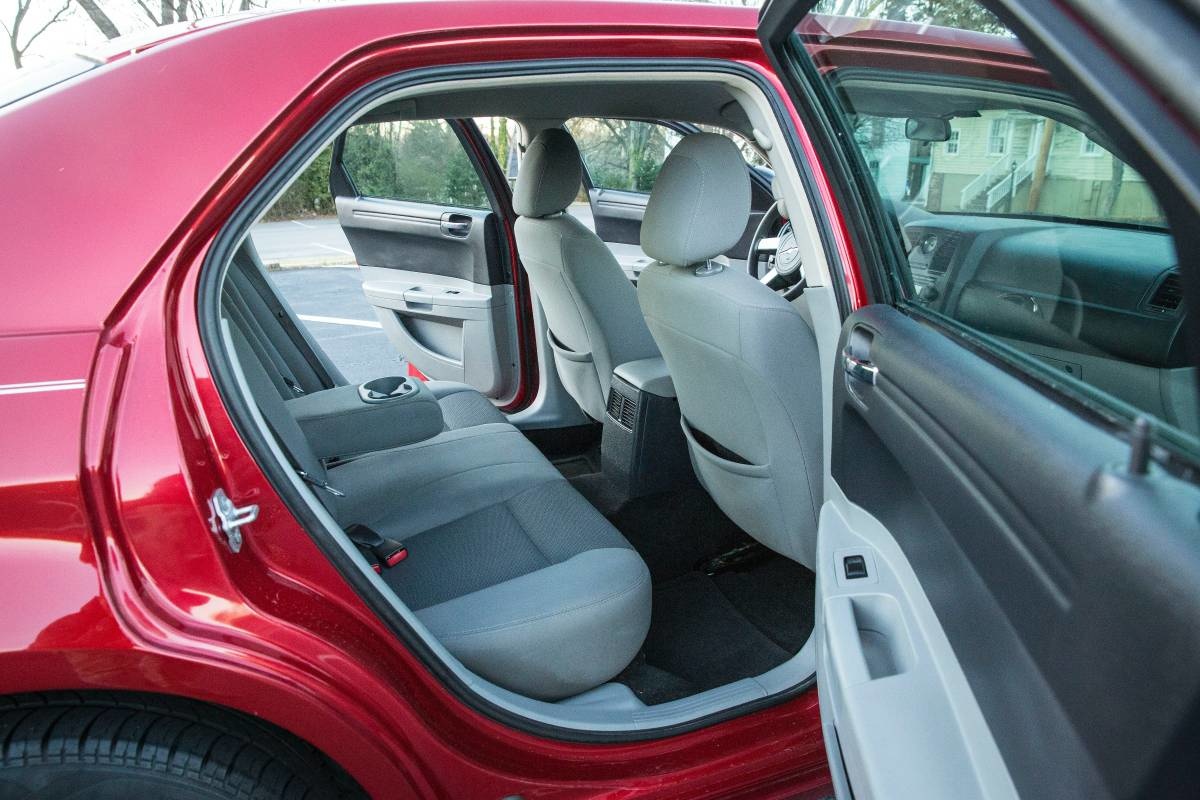 The biggest problem with the 300 is that the interior can’t cash the checks that the exterior appearance writes. Premium cloth seats are standard, but that’s not the problem. The car’s cabin is built for function, but people buying this near-luxury sedan will likely want more than what the 300 can deliver.

The dash and all controls/gauges are easily visible and clearly labeled, and the center stack is functional without much in the way of decoration. Fit and finish is not cheap, but the lack of anything that isn’t completely functional is disappointing when the rest of the car is quite good. The four-spoke steering wheel is accented with wood trim, almost like those found in Mercedes-Benz vehicles. Leather seats are optional, and they’re soft and luxurious when equipped, and the SRT-8 trim has suede inserts that help grip passengers’ backsides as the vehicle is tossed around.

The interior is quiet and calming, as it should be in a car that has such luxurious aspirations. Wind and road noise are all but squashed, and the long wheelbase gives the car a wealth of space inside. Back-seat passengers have a generous 40 inches of rear legroom and can enjoy amenities like a folding armrest with cupholders. Large door openings make entering and exiting the rear seat very easy, and give parents an extra few inches to load car seats. The driveshaft tunnel cuts into that oasis a bit, but the outboard back seats are large and easily accessed. 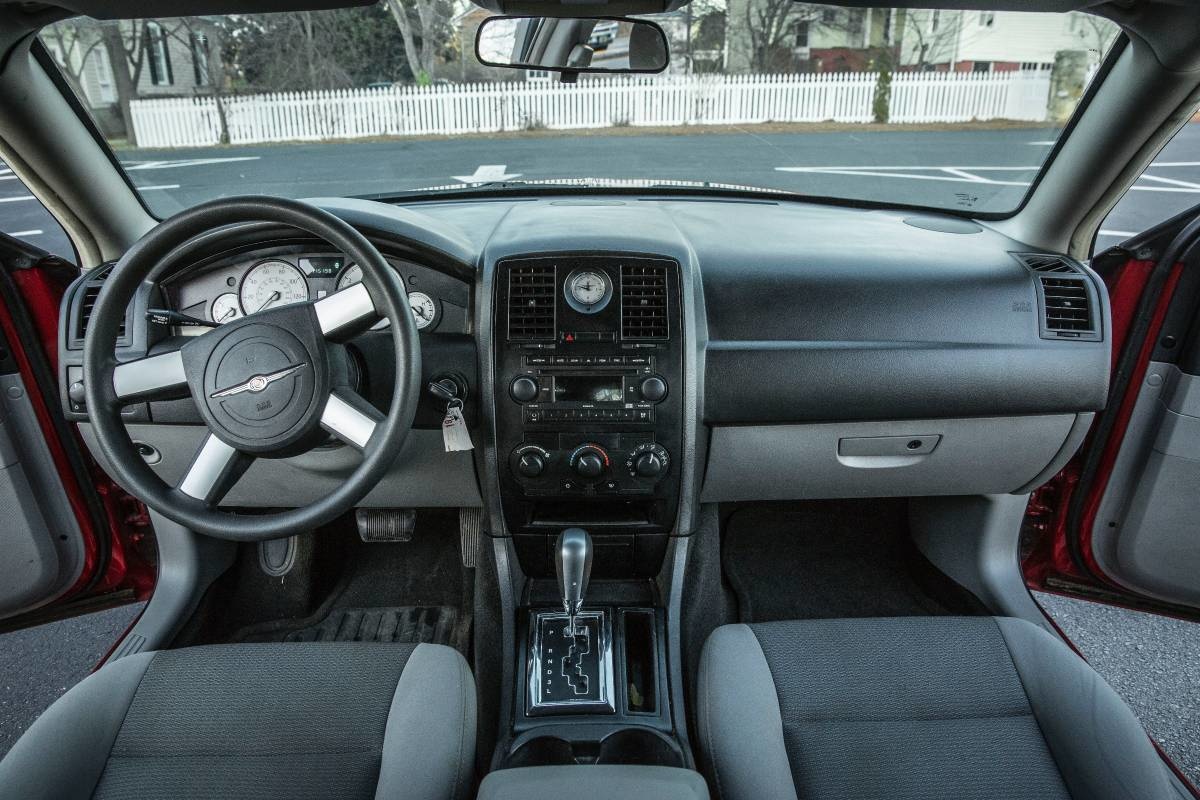 The 300 comes well equipped in all of its forms, but the higher trims are where the most entertaining features step in. An AM/FM stereo, four speakers, CD player, and auxiliary input are standard, while a CD changer, rear entertainment system, a six-speaker premium sound system, satellite radio, and an MP3 player are optional. A navigation system can be added, as well. 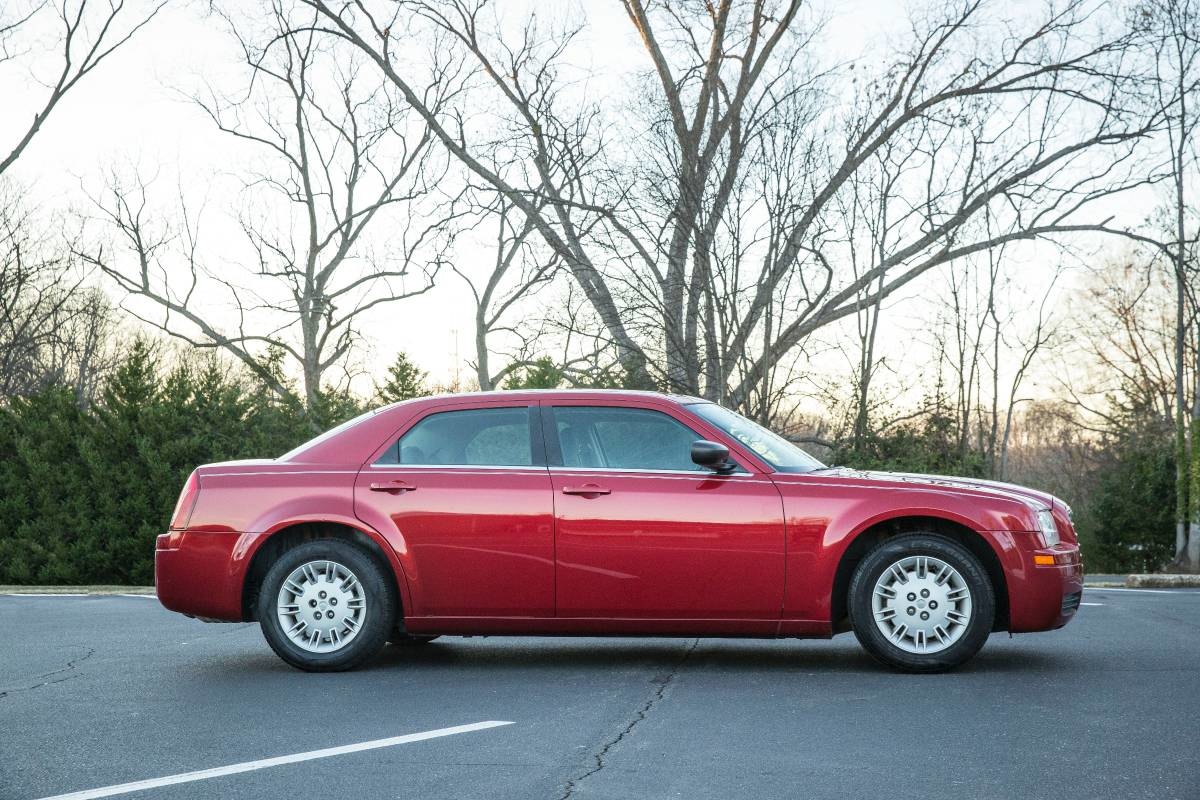 The Insurance Institute for Highway Safety (IIHS) rated the 2007 Chrysler 300 Good for moderate overlap front crashworthiness, Marginal for side crash tests, and Marginal for the head restraints and seats. It’s worth noting that side crashworthiness is rated Poor without the optional side airbags. 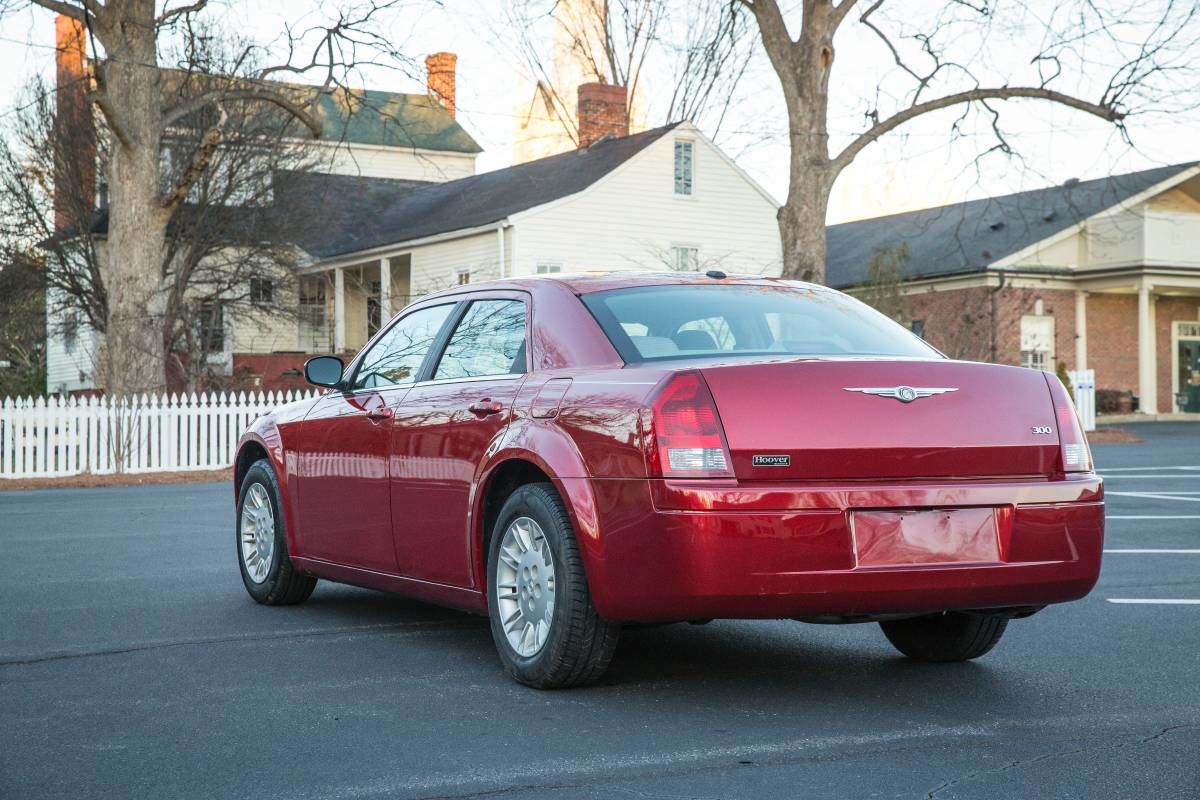 Value runs strong with the Chrysler 300. Its starting retail price of less than $25,000 is noteworthy, not just for the car’s standard feature set, but also because of how comfortable and composed it is on the road. Not many cars are on the same level, even for much more money. Stepping up through the trim levels is a gradual process, jumping between $3,000 and $5,000 for each trim. The Chrysler 300 SRT-8, at just over $40,000, brings muscle car performance, an intoxicating sound, and all the luxury that the rest of the 300 lineup brings, and does so in style.

If there are any weak spots in the 300’s armor, it’s the fuel economy. Full-size cars deliver full-size gas mileage, but the Chrysler 300 delivers near-SUV mileage.

The base model, equipped with the 2.7-liter engine, the Chrysler 300 is rated at 18/26/21 mpg city/highway/combined, which is the most respectable mileage of the model line.

The SRT-8 gets 13/18/15, which isn’t surprising when you consider how large the engine is and how much power it puts down.

Gas mileage aside, the Chrysler 300 makes for a compelling alternative to more expensive offerings from BMW or Cadillac, though newcomers like the Hyundai Azera bring some competition to the segment. The good news for Chrysler is that Chevrolet, Ford, and other popular automakers like Toyota and Nissan don’t have a comparable car in their lineups.

Users ranked 2007 Chrysler 300 against other cars which they drove/owned. Each ranking was based on 9 categories. Here is the summary of top rankings.

2007 Chrysler 300 2.7 died driving highway speed. Now, when I try to start it, it does not even attempt to start, no clicking, nothing...BUT all the lights across the panel come on, the radio works...

Where Is The Fuse Box

hi i have a chry 300 07 ac blows cold driver side and allmost warm on passenger side fan work well was told its not vacumm its all eletric on that car .? is that true could it be a actuato...