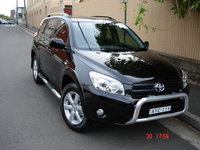 With the redesigned 2006 RAV4, Toyota simultaneously resolves complaints about the previous model while setting new standards for all compact crossover SUVs. 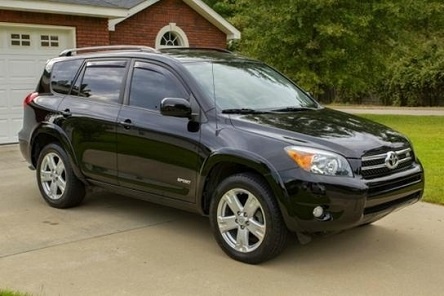 All-new for 2006, the Toyota RAV4 has a few things in common with the previous RAV4. For starters, it’s a Toyota. It has a standard 4-cylinder engine. And it has a side-hinged tailgate with a spare tire mounted to it. Otherwise, the new 2006 Toyota RAV4 is a completely different vehicle sold in standard, Sport, and Limited trim levels. 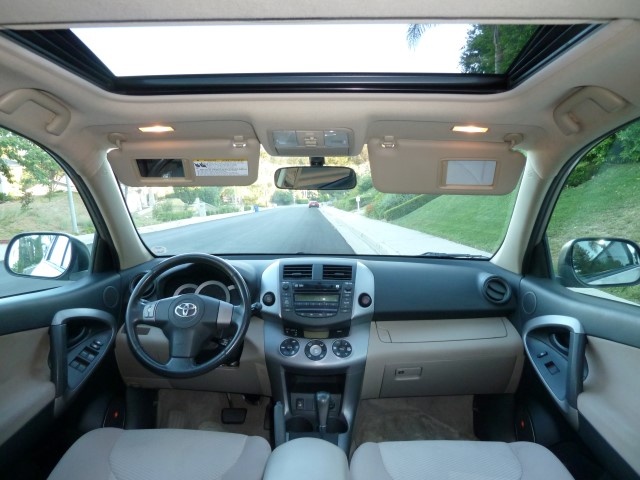 For the 10 years since the first Toyota RAV4 landed on U.S. shores, the compact SUV has emphasized “compact” instead of “SUV.” That changes for 2006, because the redesigned RAV4 is bigger inside and out, and can deliver just as much “sport” as it does “utility.”

From an exterior styling perspective, you’ll see similarities between the old RAV4 and the new one. The lighting elements, grille, and bumpers display common themes. And, of course, they both have a spare tire hanging on the rear tailgate. Otherwise, these are completely different vehicles, the new 2006 RAV4 a larger and more substantial looking crossover SUV.

The same is true of the interior. Much larger than before and featuring a layered dashboard with bigger controls and a handy second storage area above the glovebox, the 2006 RAV4 is a more useful daily driver. But certain design themes transfer to the new model, like the steering wheel, the round outboard vents, the circular instrumentation, and a smattering of buttons.

If there is a misstep with the new RAV4’s interior, it has to do with the low-gloss coating on some of the plastic panels. It scratches easily, and it won’t be long before it adopts a permanently scuffed and smudged appearance. 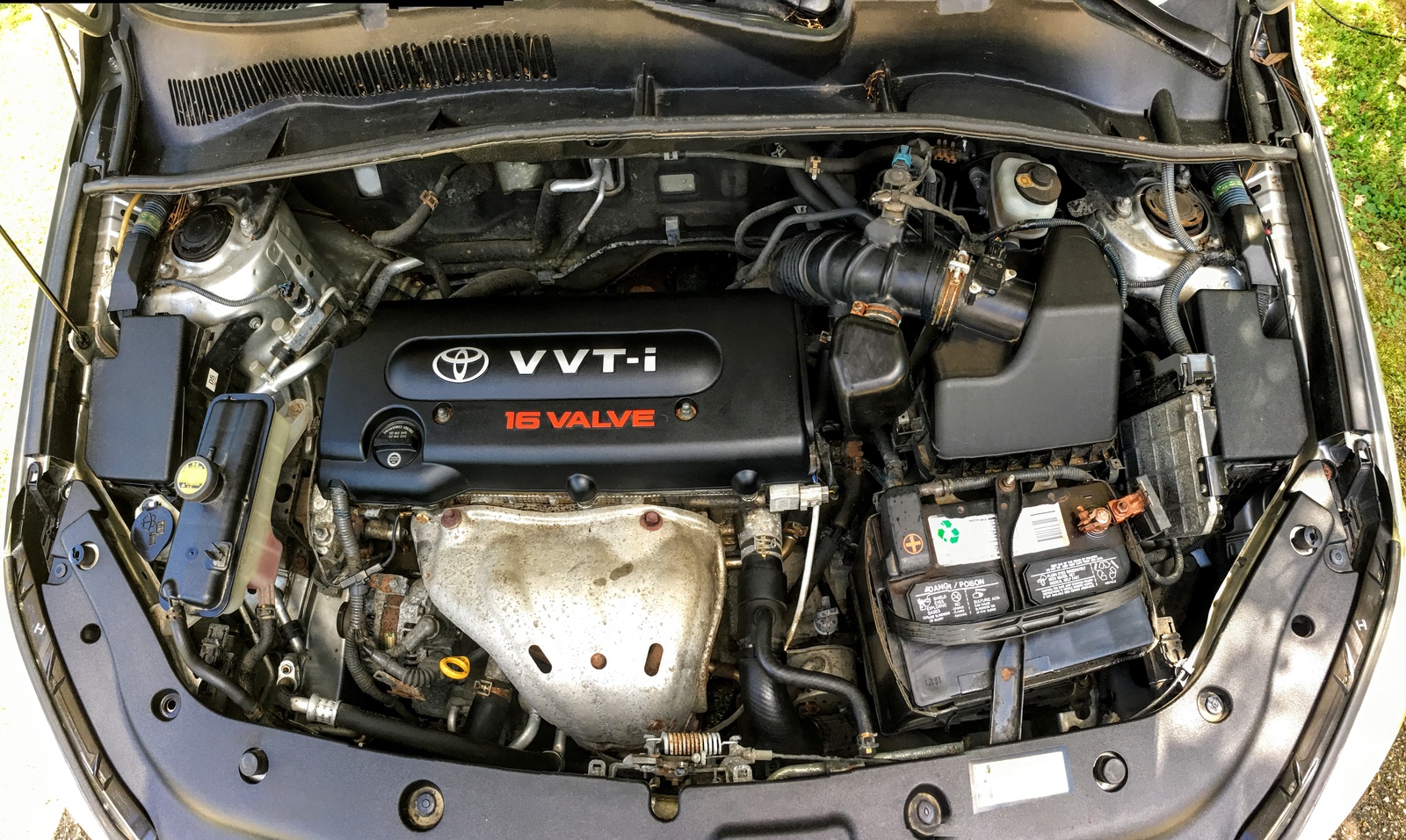 Chances are, you’re going to want the RAV4’s optional 3.5-liter V6 engine. It’s a sweetheart; smooth, refined, and cranking out a substantial 269 hp in exchange for about $2,000 extra. It provides stunningly good performance for a compact crossover, and thanks in part to a 5-speed automatic transmission it doesn’t consume much more fuel than the harder working 4-cylinder does.

Install that V6 in the RAV4 Sport, which has a sport-tuned suspension and steering combined with larger wheels and tires, and you’ll have a terrific time driving this small SUV. Fast, nimble, roomy enough for a family and its gear, and as reliable as the rising sun, a RAV4 Sport V6 is what you buy when your spouse tells you it’s time to give up the sport compact or muscle car in favor of a practical kid hauler.

Of course, these glowing impressions do not extend to other versions of the RAV4, especially with the 4-cylinder engine. Comparatively dull, they’re nevertheless refined, reliable, and easy to live with if not engaging to drive. 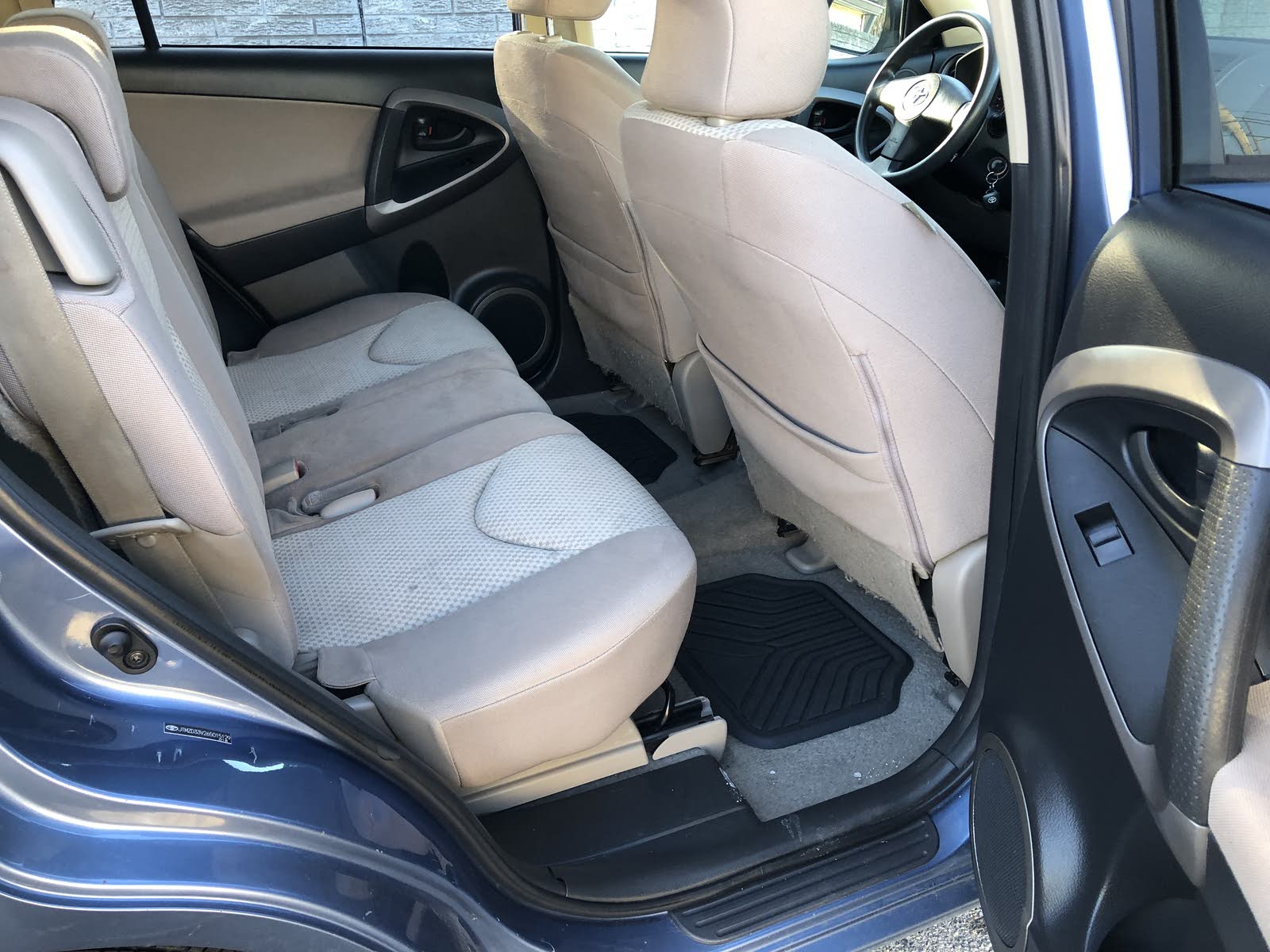 Believe it or not, the new 2006 Toyota RAV4 offers enough interior room for an optional third-row seat. It certainly isn’t for grown-ups, but it does offer greater passenger flexibility than any RAV4 to come before it.

Second-row seat room is much better than in the old RAV4. The seat slides on tracks to help make room for third-row passengers or to maximize second-row legroom.

Up front, the seats are reasonably comfortable, wrapped in cloth or leather depending on the trim level. Know, however, that the hard plastic on the upper door panels is very unfriendly to elbows, so if you tend to prop your arm there, it will get sore pretty fast.

Sport trim swaps those steelies for a set of handsome 18-inch alloy wheels and adds both sport-tuned steering and suspension to lend credibility to the trim level’s name. Fog lights, heated side mirrors, and a roof rack are also a part of the Sport package, and you can upgrade this version with the delightful V6 engine.

Choose the RAV4 Limited for a well-equipped interior but not quite as exciting a driving character. It has dual-zone automatic climate control, a power-adjustable driver’s seat, and a CD changer, and offers a JBL premium sound system and leather seats as options. This version has 17-inch alloy wheels and comes with a 4-cylinder or a V6 engine.

The new RAV4 not only offers more passenger room, but it also comes with a bigger cargo area. Open the side-hinged rear tailgate and you’ll find a generous 36.4 cubic feet of cargo space. Fold the rear seat down to maximize volume at 73 cubic feet. That’s more room than some midsize SUVs provide. 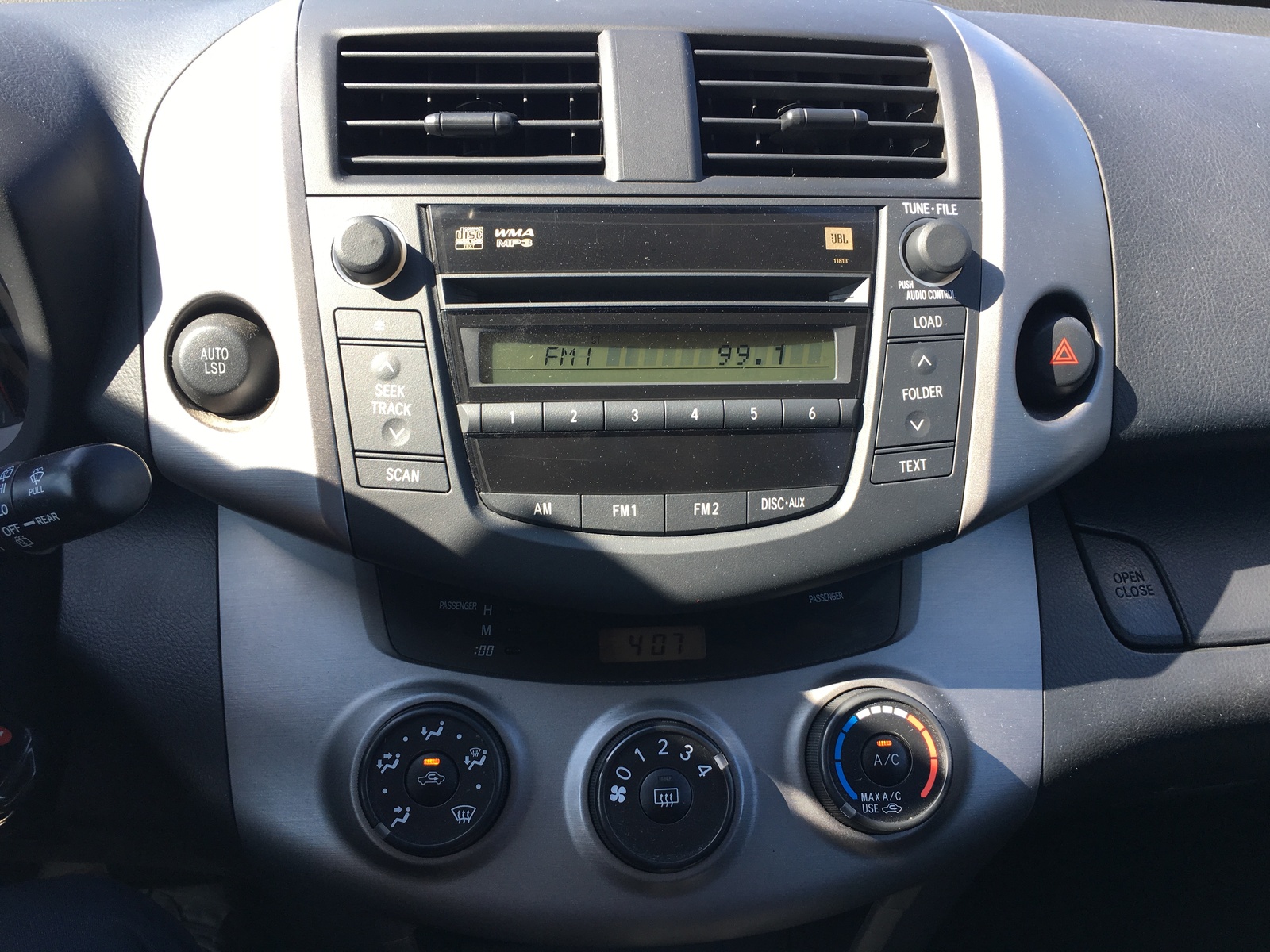 In accordance with its status as a compact crossover SUV, the 2006 RAV4 doesn’t offer much in the way of technology. But what’s available is useful to the target audience.

Every RAV4 has a CD player with MP3 playback capability and an auxiliary audio input jack. A 6-disc CD changer is included with Limited trim, which also offers a JBL premium sound system and a dual-zone automatic climate control system. 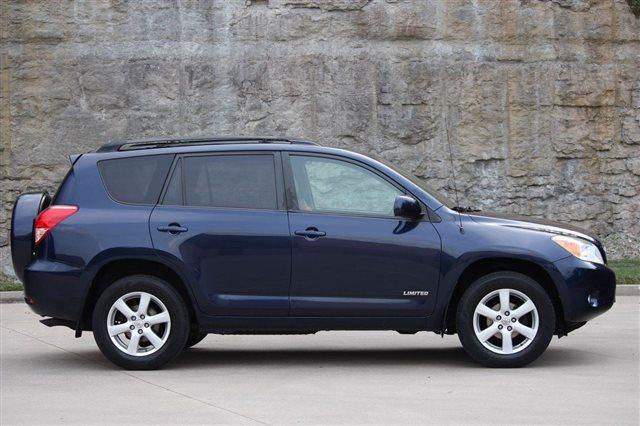 Tested with its optional side airbags, the 2006 RAV4 performed well in crash tests administered by the Insurance Institute for Highway Safety (IIHS). In the moderate-overlap frontal-impact test and the side-impact test, it received the highest rating of Good. Roof crush strength earned an Acceptable rating, but the seats and head restraints racked up a Marginal rating.

The National Highway Traffic Safety Administration (NHTSA) found the RAV4 to be quite crashworthy, giving the SUV 5-star ratings in most assessments combined with 4-star rollover resistance ratings. According to the NHTSA, there is no difference in side-impact protection with the optional side airbags. 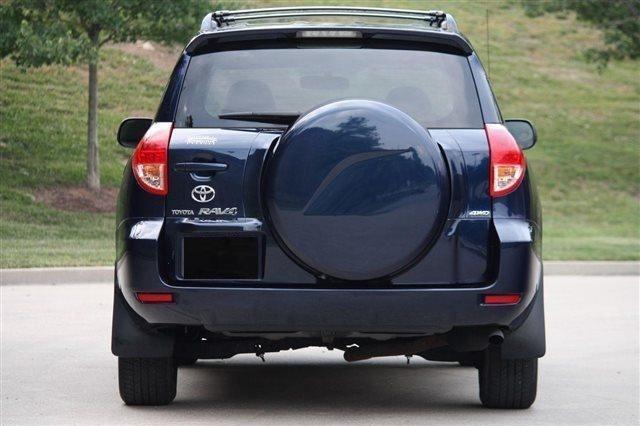 Though it tends to cost a little more than some competitors, the 2006 Toyota RAV4 is the kind of vehicle you buy today and continue driving for 20 or more years. Practical, safe, accommodating, and reliable, it’s an excellent choice for anyone seeking a Point A to Point B kind of vehicle that never causes any trouble.

And if you love to drive, well, Toyota has a solution for you in the RAV4 Sport V6.

It will come back on after flickering. It usually makes a chipping sound before it goes out. Ive been taking it various places and no one can pinpoint or solve the mystery. What is really wrong wi...

We have a 2006 Toyota RAV4 with a seized engine. With a working engine it is worth $5200.00. We want to know how much could we sell it for without the engine?